One TV technology we
love that gets nowhere near enough attention – in our opinion – from TV
manufacturers is direct LED lighting. Illuminating pictures using an array of
individually controllable LED light clusters directly behind the screen has consistently
delivered picture quality that’s streets ahead of anything possible with the
much more common edge LED lighting system.

Which is why two of
the most exciting products on show at this year’s IFA show were LG’s Nano TVs.
Available in the next four to six weeks in 47in and 55in screen sizes (for
around £1,799 and £2,499 respectively), the Nano models – AKA the 55LW980T and
47LW980T – manage the not inconsiderable feat of combining the extreme
slenderness of edge LED TVs with the potential picture quality of direct LED
TVs.

They achieve this by placing
a diffusing filter in front of their rear-mounted LED clusters, so that their
light can be spread over a wide enough area without needing the usual amount of
‘throw’ distance.

The number of LED
clusters in the sets is interesting too; you get a very respectable 242 blocks
in the 47in, and 288 in the 55in, giving you a very promising degree of local
dimming/brightness control. Toshiba’s ZL1 direct LED TV uses 512 blocks, it has
to be said – but of course, Toshiba has deemed the ZL1 too expensive to launch
in the UK, so LG’s slightly less ambitious but still promising approach seems
to be the more commercially sensible one. 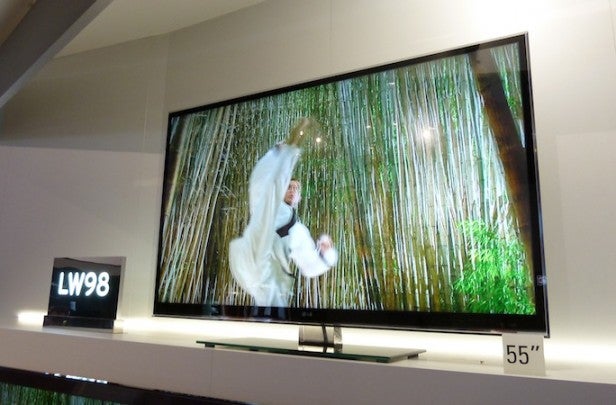 The Nano models not
surprisingly received pride of place on LG’s stand at IFA, and were left
running in 3D to stress the way visitors to the stand could walk around wearing
a pair of LG’s lightweight, electronics-free, cheap-as-chips passive 3D glasses
rather than having to put their faces up to fixed-in-place 3D glasses ‘poles’
as is the case on the stands of brands that favour the active 3D format.

The Nano sets were actually
originally intended to use active 3D technology. But LG decided that it didn’t
fit properly with their passive 3D push to have their flagship LCD TVs using
active technology, so now the Nano sets are equipped with LG’s passive 3D film
patterned retarders.

This move does
actually raise a slight initial concern as we checked out the Nano sets, for it
was certainly possible to see the horizontal line structure of the 3D filter in
the picture – especially on the 55in model – in the form of some jaggedness to
contoured edges. And we still maintain that we can see the reduced resolution
with 3D Blu-ray that comes from passive 3D technology (whatever claims LG might
make to the contrary). Especially, again, on the largest screen size.

One other more minor
concern from our IFA hands on is that the diffusing filter used to spread the
light from the LED clusters possibly reduces black level depth compared with what’s
achieved by ‘fatter’ direct LED TVs that don’t use such a diffusing filter.

However, despite these
various issues, our experience with the Nano sets at IFA was overall very
positive. Pictures look spectacularly bright, vivid and dynamic, for a start. And
actually, while black levels weren’t the deepest in the direct LED world, it
was noticeable how impressive dark areas on the Nano TVs were at revealing
subtle shadow detailing compared with the potential ‘black hole’ effect you can
get with direct LED TVs. 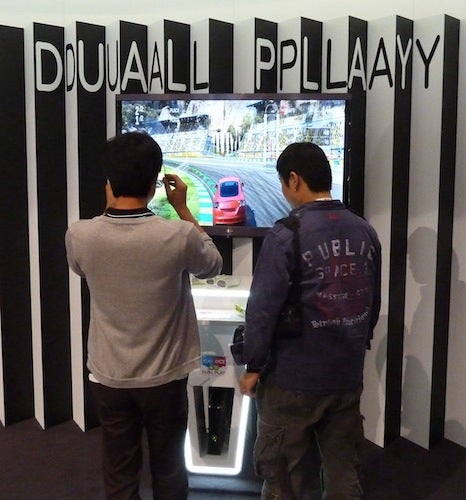 Also extremely
impressive was how natural motion looks on the Nano sets. There’s practically
no judder or motion blur. Even better, this motion prowess seems to be down
more to the innate properties of the screen rather than lots of heavy duty
video processing. Certainly the picture didn’t look processed in any way.

In fact, it’s the
lovely naturalism of the Nano TVs’ pictures that became the most lasting
impression from our time with playing with the sets, meaning that we remain hugely
excited about getting them on our test benches in the coming weeks.

The only truly sour
note in our session came when we tried out the Nano models’ ‘dual play’
abilities, whereby you can use the polarising properties of the 3D screen to
allow two different players to enjoy simultaneous full-screen gaming. For while
the system worked rather well, testing it out led to us getting utterly
humiliated during a head to head race against one of LG’s UK marketing people.
Grrr. Mental note: must practice our console racers before next year’s IFA…