Was it really as long ago as May 2007 that I reviewed LG’s Prada? Back then, we still had six months to wait for Riyad’s review of the first iPhone, too, and touchscreens in general were the domain of business oriented smartphones. How things have changed.


LG has been as active as any in pushing touchscreens for consumer handsets and has presented us with another helping of Prada-esque marketing in the shape of the Prada II KF900. It will cost you more than £400 SIM-free though as I write Orange has it listed as ‘coming soon’ on a pay monthly contract and you can bet it’ll be a lot less expensive there. 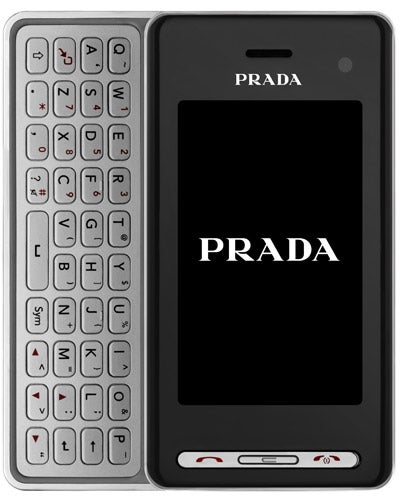 The Prada II looks very similar to the preceding model. The Prada branding sits above the screen, while beneath it lies a short silver bar nestled in the otherwise black front casing. The bar offers Call and End buttons, the latter doubling as the on/off switch. Between the two is the Clear key. 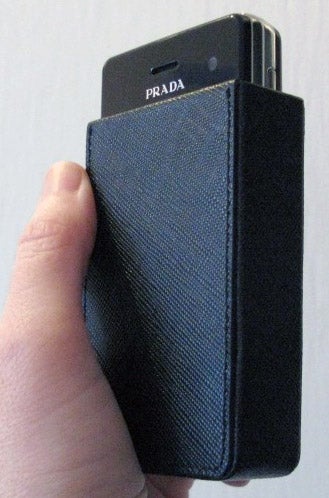 Included in the accessories package is a cleaning cloth for wiping finger marks off the screen and what its box proclaims to be a leather case. This is most disappointing. It is a rigid design and about the least stylish phone case I’ve ever seen. The Prada II slots into it, but not all the way. Instead, either the Prada branding or the Call, End button bar protrudes. Nasty.


The screen measures three inches diagonally and has 240 x 400 pixels, the same as the original Prada. Where the Prada II does vary from the previous model in terms of physical design is the keyboard, which slides out from the side. 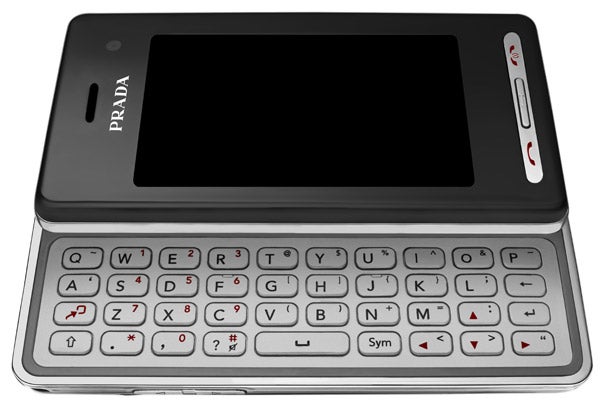 It does increase the phone’s bulk and weight making it 104.5mm x 54mm x 16.8mm and 130g as opposed to the original Prada’s 98.8mm x 54mm x 12mm and 85g. However, it is very well put together as far as ergonomics go. The keys are relatively large and well spaced, and they are raised slightly, making a click when pressed. Accuracy was not a problem and I managed a fair turn of speed too. There is no separate number row, though, and unfortunately you need to use a shift key to get to the ‘@’ symbol.


The screen drops into wide format when you slide the keyboard out, and a carousel menu of keyboard supporting functions pops up. There is an accelerometer, too, which can be used in some of the on-board games.

The user interface of the original Prada phone has been retained and enhanced. It is very reminiscent of other LG handsets such as the Cookie and Renoir.


The main menu system relies on a column of application groupings down the right hand side: Communicate, Entertainment, Utilities, Settings. Within each group are precisely eight options ranged on the touchscreen as large round icons. It is all very easy to get to grips with. 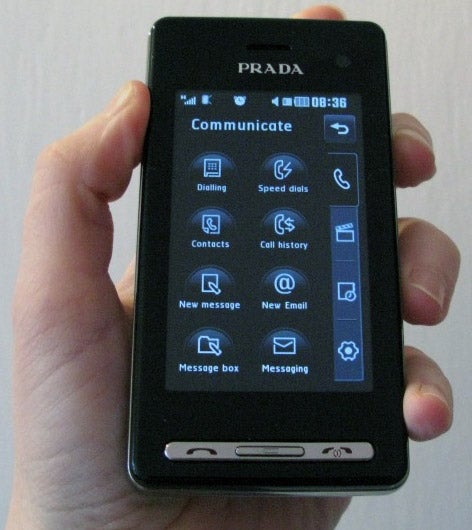 LG has also opted for a multi-layered main screen. The primary screen gives you a row of four shortcut buttons on the bottom edge for getting to number dialling, contacts, messaging and the main menu. Tap the status bar and more info and shortcuts appear, for example, to the music player, Bluetooth and Wi-Fi.


Sweep left to right and you toggle through a shortcuts screen offering a maximum of nine user-defined shortcuts and a widget-based screen onto which you can drag seven elements like the phone’s calendar, radio and world clock. Hardly innovative, but useful. You can get to those app shortcuts via a side button on the phone too, by the way.


The phone supports finger-panning and has a surprisingly responsive iPhone-like pinch-to-zoom system for web browsing and image viewing. 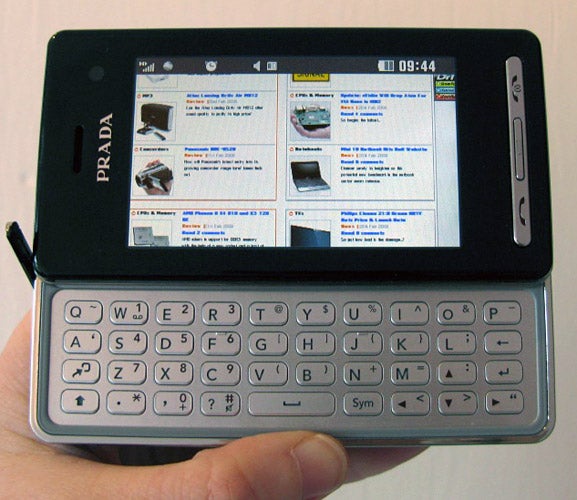 The Prada II has just 60MB of internal memory and a slot for a microSD card on the right edge. LG provides a card but rather meanly, it is just a 1GB one. The phone is SDHC compatible and it had no trouble with my 16GB card even though LG’s specs state an 8GB limit.


If you are a music fan LG’s usual proprietary headset connector will be an annoying fact of life. Still, there is a fair bit of good news on the music front. The connector is on the top edge of the phone where it’s easy to get at and doesn’t cause problems in the pocket.


The provided headset is two-piece with a 3.5mm connector just past the mic section. The controls on this section are plentiful and include a hold button to lock them out. The Hold button doesn’t double for the phone’s main screen though, which has its own side-mounted lock button.


Even the phone’s equaliser is praiseworthy making a noticeable difference when you flick through its settings. I’d like the ability to make my own EQ settings, though, and the in-ear buds on the provided headset, as usual, failed to stay in my ears. The FM radio is welcome too.

The Prada II is a quad-band GSM handset with HSDPA right up to 7.2Mbps, beating the original Prada’s tri-band GSM capability. There’s also a front camera for two way-video calling. It is nice to have Wi-Fi here, too, but GPS is a sad omission in what is, after all, a pretty expensive handset.


The camera is a 5-megapixel Schneider Kreuznach offering with a flash, autofocus and macro mode as well as a panorama mode among its specifications. It also manages 720 x 480 pixels video capture.

The coloured dish, photographed indoors under normal household lights is as good as I could have expected from a camera of this type. Ditto the chair, which is crisp and sharp. Best of all, though, the macro mode produced very sharp shots. The crocuses are a good example and their colour reproduction is great too.


Other applications on this phone not already mentioned include Muvee Studio for a bit of editing of your images, a couple of fairly uninspiring games that support the accelerometer, alarms, to do list manager, memo maker, voice recorder, calculator, converter and stopwatch.


LG says you’ll get three hours of talk time from the battery, 400 hours on standby. I found with both Wi-Fi and music use I needed to boost the battery every two days.


If you can find this phone on a contract that appeals to you then what it offers may justify the outlay. But overall it doesn’t seem to be doing enough to justify a price of more than £400 SIM-free. The touchphone market is cut and thrust at the moment, and while I like it, the Prada II doesn’t have enough that is special to really draw the eye. 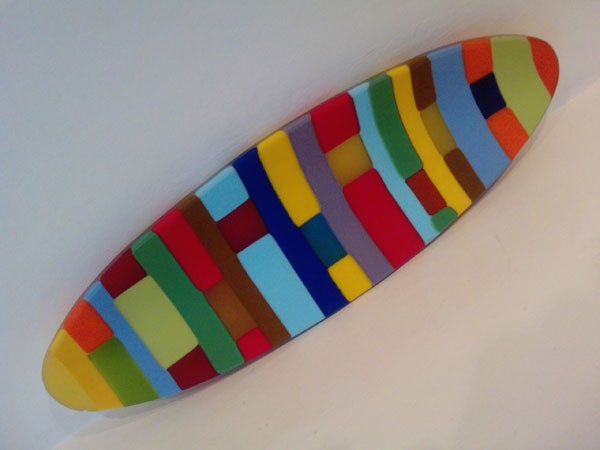 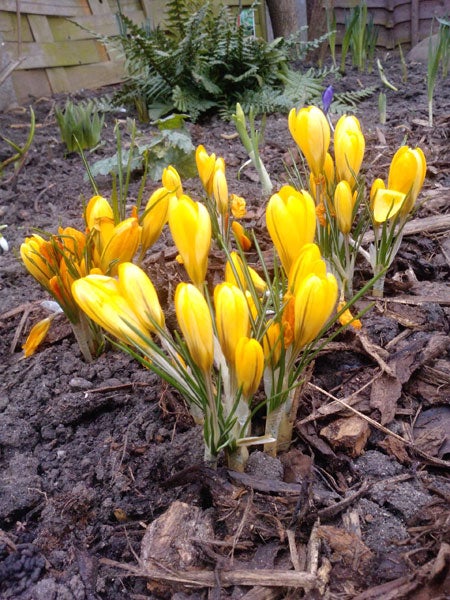 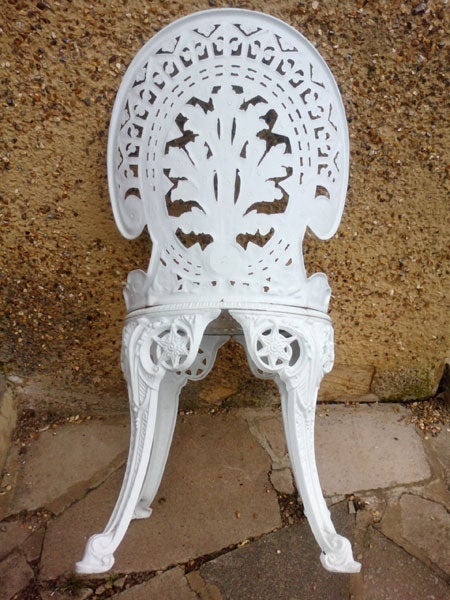