While some brands that sell TVs are actually better known as PC monitor manufacturers – Viewsonic springs to mind, others such as LG are the other way round. For example, just recently LG’s 37LB1DB 37in LCD TV did well in our TV section. In his opening comments John pointed out that Korea seems to have stolen a march over Japan when it comes to it to gorgeous design. LG is certainly on a role with great looking TVs, the distinctive ‘Chocolate’ phone and now this monitor. 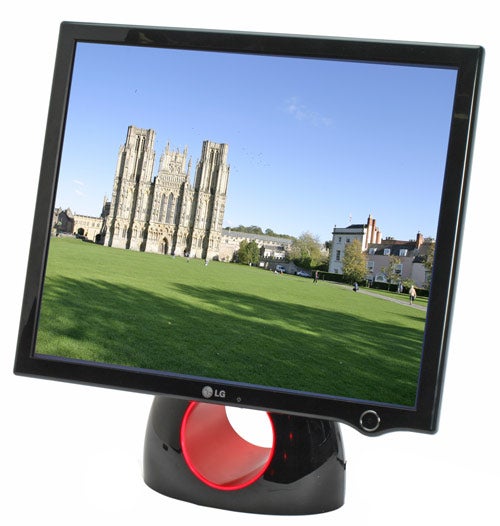 Now 19in 4:3, or rather 5:4 aspect ratio screens to be accurate, are now so run-of-the-mill that we only feature them if there’s something special to them. We’re on pretty safe ground here then as the L1900R is one of the most distinctive monitor designs we’ve ever come across.


The display is mostly notable for its stand and there are two other monitors in the so-called ‘Fantasy’ series with individual base stands – the L1900J (Jar) and the L1900E (Eclipse). The ‘R’ on this model stands for Ring.


It oval base looks as much like a lamp shade as a monitor stand and has a circle in the centre. When the monitor powers on or off an LED strip round the circle fills up with a red light in an anti clockwise fashion, and reverses this when you turn if off. The display has no height adjustment though, but does tilt forward and back.

The whole display is decked out in a shiny cherry red plastic, that’s very different for a PC monitor. It gives it a high class sheen that’s more stylish than the regular business focussed display. The bezel also is also quite thin, which adds to the effect. It’s too thin to accommodate the power switch, which bulges out as a result but this just adds another distinctive touch. The on switch is touch sensitive and requires only a light brush to get that ring moving. The only other button is underneath the bezel and enables you to turn the ring permanently on or off.


The display itself and the base are notable for being very thin and light. This is because LG has kept it as free of inputs or buttons as possible. The only input is DVI, (it is listed as HDCP compliant) and this is located on a dongle that attaches to the monitor at the very bottom centre of the monitor base. This dongle is all curves and sports the same shiny red plastic of the rest of the monitor. A shame almost, that the supplied DVI and D-Sub to DVI cables are just conventionally coloured.

The power supply also connects to this dongle. To keep the base small the L1900R has had to use an external power supply – it’s a regular ugly black box but it’s on a long cable and not to large so can easily be hidden away under the desk.


As the button count has been kept to a bare minimum LG has elected to go with software rather than having an OSD. This software is called ‘Forte Manager’ and is pretty good. It has a check update button that launches your browser and takes you to a page you can download the latest version from. Unfortunately, it also crashes every time and takes ‘Explorer.exe with it and this happened even after the update.

The software itself though is pretty good though and I found it easier to use than an OSD, which can be quite obtuse in their designs.


The software enables you to adjust the brightness and sharpness and choose between Movie, Text, Normal and User presets. It also has a full colour calibration routine and you can choose the colour temperature of your choice. You can also use it to turn the ring light permanently on or off, and save your settings to a profile. 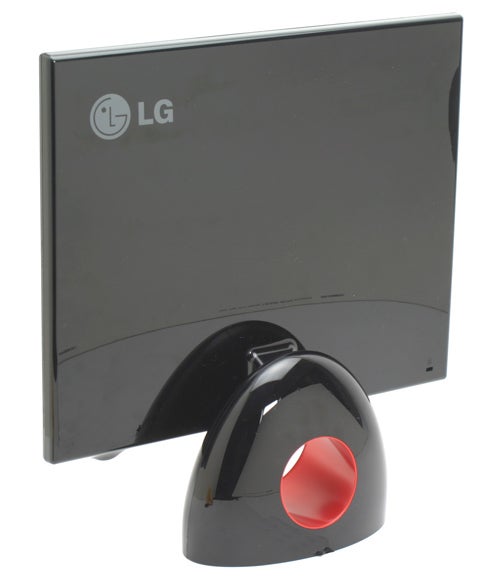 For all its high design looks I half expected the image quality to be the weak link on the LG. However, I was pleasantly surprised. In our Display Mate tests the performance was generally good. There was some evidence of compression near peak white and there was some banding in the 256 level colour scale ramp. In the colour scales test, red fades to black early, as it does on many screens. The screen is only a 6-bit screen though offering 16.2m colours – so not one for precise image work due to dithering.


In Windows, the screen is very bright and text sharp and clear. Whites were far truer compared to a Dell 24in and blacks deeper, which in turn helps colours appear far truer. This helped video to look good on this display. In games, colours appeared strong too, while the 4ms grey-to-grey response time, for those that are concerned with this number, is low, and indeed motion was very smooth.

However, I found that to get the best contrast ratio I had to turn down the brightness, but when I did, it gave the display a blue tint. It takes a bit of work, but I found I could make adjustments to get the best picture for the task I was doing, though it meant making regular changes. This is where the profiles came in handy.


Viewing angles when moving horizontally are pretty good, but not great in the vertical plane, with the colours and brightness dramatically reducing. However, this is inherent in the basic TA technology employed.


Overall, for a 6-bit panel I was quite impressed with the image quality from the L1900R, as well as its unique aesthetics. My main concern is that it’s not widescreen, which makes it less attractive for serious video or gaming use. 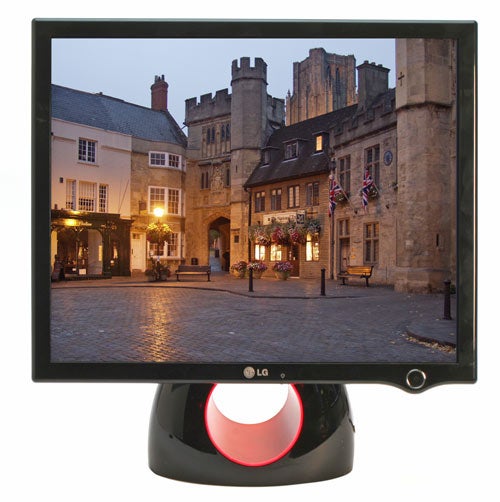 If however, these aren’t you’re primary concerns, and if you simply want a monitor that will look really good on your desk and delivers a decent picture then the LG 1900R is worth its £209 asking price. If that price can drop below that magic £200 mark, then LG would have a real bargain on its hands. Let’s hope LG goes on and produces a 20in, 1,680 x 1,050 version too.


The LG 1900R is one of the boldest looking designs I’ve seen from a non-Mac product. Its design is great, which boosts its scores despite its lack of connectivity. The only real downer is that it’s not widescreen, which means it just misses out on an award. If you’re prepared to fiddle with the software you can get excellent results from its image quality too.