LG’s HLX56S is what you might call a ‘one-stop shop’, packing a 3D-capable Blu-ray player and 4.1-channel speaker system into a single soundbar unit. That means you get hi-def pictures and powerful cinematic sound without having to clutter up your living room with loads of boxes and speakers. It’s also the first of LG’s 2011 Blu-ray range that we’ve tested, so it’s our first chance to check out its updated internet content portal, Smart TV.

But let’s kick off by taking a look at the design, and only one word can describe it – wow. The HLX56S is an absolute stunner, dressed in a luxuriously showy brushed silver finish that’ll instantly turn your living area into something from the future. The four driver cones are styled in the same finish, with a darker tweeter sandwiched between each pair.

Your eye is instantly drawn to the curved platform jutting out from the front, which accommodates the disc slot (trays are so last century) and a USB port for media playback, which is covered up by a flap.

That silver finish is juxtaposed beautifully by a gloss black section on top, which also sports a row of touch-sensitive controls that give a cute little chime when pressed. The only negative about the design is that its depth and awkward shape don’t allow it to be wall-mounted in the traditional way – you’ll need to put it on a shelf or piece of furniture underneath your TV. 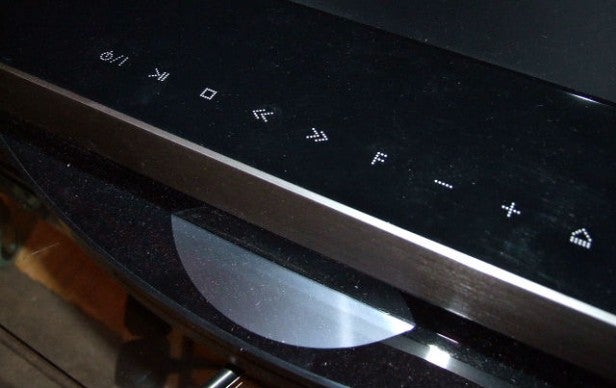 The convenience continues with news that the HLX56S comes with a wireless subwoofer. That means you can put it in the most aesthetically and acoustically suitable place in the room, although it’s powered so it’ll need to go near a plug socket. We’d hardly call it compact, but the smart black styling and hefty build quality are impressive.

Rear connectivity is excellent by soundbar standards. Not only do you get a HDMI v1.4 output, capable of piping 3D pictures to your TV, but two HDMI inputs allow you to listen to external sources though this unit. That’s a real godsend if you want to boost the sound from games consoles or digital TV boxes, plus you can connect them all to your TV using a single cable. What’s more, because it supports the Audio Return Channel, you can enjoy TV sound without the need for a separate audio cable. There’s also a connector for the supplied iPod cradle, while a 3.5mm minijack input and FM radio antenna port complete the line-up. 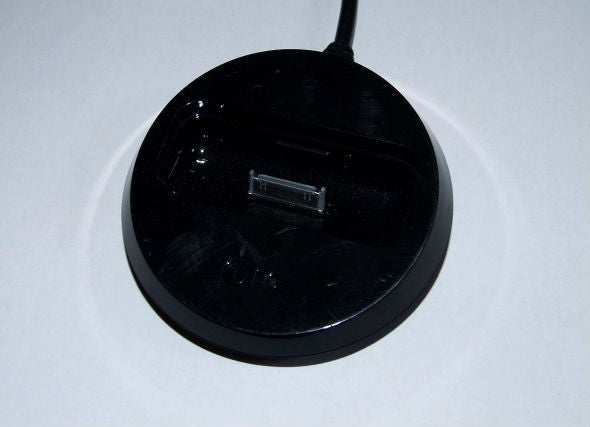 3D Blu-ray playback is of course the HLX56S’s headline feature, but it’s not the most exciting trick up its sleeve. It’s also equipped with built-in Wi-Fi and LG’s Smart TV, the new internet content portal that replaces the lacklustre NetCast.

NetCast only offered three sites (AccuWeather, Picasa and YouTube) but Smart TV ups the content quota to include the crucial BBC iPlayer as well as Acetrax (movies-on-demand), MLB (baseball), Viewster (more movies-on-demand), vTuner (internet radio) and Accedo (a selection of games). Facebook and Twitter are also supposed to be included but didn’t appear on our sample. It’s a big improvement, yet it still can’t match the quality or quantity of Sony and Samsung’s connected offerings.

Those sites are grouped under the ‘Premium’ section of the main menu, while a separate ‘LG Apps’ section offers a wide selection of fun things designed to keep you entertained in between Blu-ray movies. They include horoscopes, a fitness trainer, colour blindness test and many other bizarre but interesting features. You need to register with LG before you can install them though. 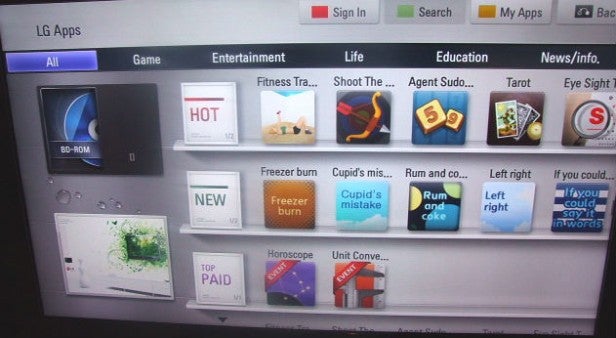 The HLX56S is also DLNA certified and can therefore stream content directly from PCs and NAS drives on your home network. The list of supported formats is excellent, including MKV, WMV, AVCHD, AVI, DivX HD and M4V video, MP3, WMA, WAV and AAC music and JPEG photos. The same formats can be played back from USB devices and external HDDs.

The soundbar unit features 2 x 70W of amplification for the front channels, 2 x 70W for the surround channels and the subwoofer kicks out 150W, amounting to total power output of 430W. It also comes with a Virtual surround setting to compensate for the fact that there are no real speakers at the back of the room. There are also Game, Night, Loudness, Natural, Bass Blast and Clear Voice presets, as well as a non-processed Bypass mode, a User EQ setting and an Upscaler mode that enhances compressed music playback. Levels for each speaker channel can be adjusted using a dedicated button on the remote.

The unit decodes all HD audio formats, upscales DVDs to 1080p, 1080i or 720p, outputs Blu-ray discs at 24fps and rips CD tracks to connected USB devices. And as is the trend these days, the unit can also be controlled using an Android phone or iPhone/iPod Touch.

General operation is a cinch. The freshly designed menu dispenses with the fussy ‘ice blocks in water’ design of last year’s models for a simple row of icons and a choice of four backgrounds, although the same pastel colours, cartoony graphics and easy-to-read fonts remain. The more straightforward layout makes it quicker to respond than last year’s systems too.

Elsewhere the quirky Smart TV menu superimposes the icons over a picture of a street, while the media streaming/USB menus are great to look at, with judicious use of folder icons and the ability to display album art where available. 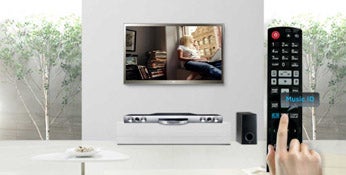 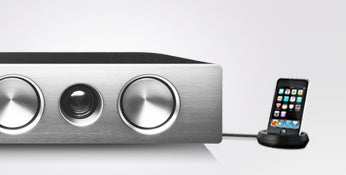 But using the DLNA functionality is far from easy. First off, it was initially tricky to get our host laptop to appear in the list, and the LG insisted on taking us to a CIFS login screen first. When the laptop finally appeared, most of the above formats streamed without any hassle, although it chewed over an AVCHD file for far too long.

Also annoying is that the content list populates itself at a snail’s pace, while the lack of a search modes or shortcuts when looking for content is galling – with upwards of 16,000 songs on my hard-disk, it took forever to find a particular track. In its favour though, there’s a useful Gracenote feature that allows you to view information about a particular track, listing the rest of the songs on that album (this is accessed using the onscreen Info menu or the ‘Music ID’ button).

Another plus is the user-friendly remote, which is peppered with large rubbery buttons that make it easy to use without having to look at it the whole time. Clear labelling, glow-in-the-dark keys and a conveniently-placed multi-directional pad complete a very well-designed zapper.

Disc loading is surprisingly slow, given how speedy LG’s previous players have been. It took 71 seconds to reach Terminator Salvation’s first image after shoving the disc in the slot, and a minute to load up our 3D copy of Avatar.

But the wait is just about worth it. Once you’ve got over the fact that the HLX56S’s sound quality is never going to rival the expansiveness and immersion of a full 5.1 system, you start to appreciate what an decent performer it is. First of all, LG has achieved a very sharp and dynamic sound, which conveys the excitement of Avatar’s action scenes in no uncertain terms. Effects ping from the four drivers at great speed and with real purpose. 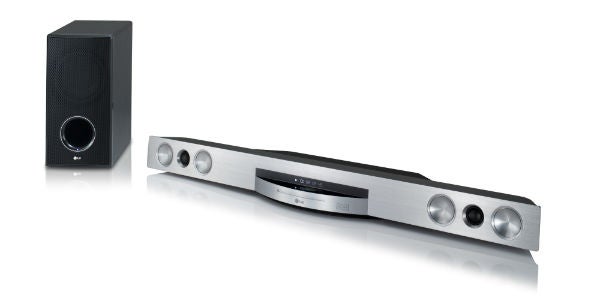 Skipping to the Thanator Chase in chapter 8, high-frequencies and fine sonic detail – such as the rustle of undergrowth and the hiss of the waterfall – are crisp, while dialogue comes through loud and clear and the subwoofer renders loud thumps and bumps with a reasonable level of punch. Also notable is the unit’s ability to give the soundstage plenty of width.


On the negative side, the slight overemphasis on treble and lack of midrange solidity make the sound a little grating on the ears, particularly with the Thanator screeching at the top of its lungs, and most of the time the subwoofer’s output amounts to an indistinct rumble. But to anyone making the jump up from TV speakers, the LG’s sound quality will seem like something of an epiphany thanks to the scale and volume of its sound.

Visually there are absolutely no question marks over its performance. 2D images look every bit as dazzling as you’d expect thanks to the meticulously rendered detail and rich colours, while the composure with which it layers the various objects and scenery on our 3D Avatar disc is impressive. Even DVDs scrub up nicely, and with our Silicon Optix HQV disc it passed all the tests no problem.

You can quite comfortably use the HLX56S to play CDs and digital music files, but don’t throw out your hi-fi just yet. The naturally treble-heavy sound makes music sound crisp and sprightly in a way that might win you over at first, and the subwoofer lends a deep, rhythmic foundation, yet prolonged listening reveals a slightly fatiguing sound.

Verdict
As a way of ticking lots of home entertainment boxes but avoiding the usual clutter, the HLX56S is a fantastic proposition. The feature list is extremely generous, taking in all of the latest cutting-edge tricks like 3D, DLNA and internet streaming, plus it’s one of the most gorgeous-looking pieces of AV kit we’ve seen in a long time.

For the most part its sonic performance is impressive, providing a dynamic and detailed presentation of Blu-ray soundtracks, yet for all its verve there’s an overemphasis on high-frequencies that prevents it from being the out-and-out barnstormer we hoped. But that aside, LG should be applauded for packing so much good stuff into this slim and surprisingly affordable soundbar.