If you like the look of LG’s BD570 Blu-ray player and need a surround sound system to go with it, then the HB965TZ might be just what you’re looking for. It boasts all of the nifty features offered by LG’s standalone deck but throws a set of ultra-stylish 5.1 speakers, 1,100W of amplification and a preposterous amount of other goodies into the box – all for a fairly reasonable outlay compared with the cumulative price of separates. 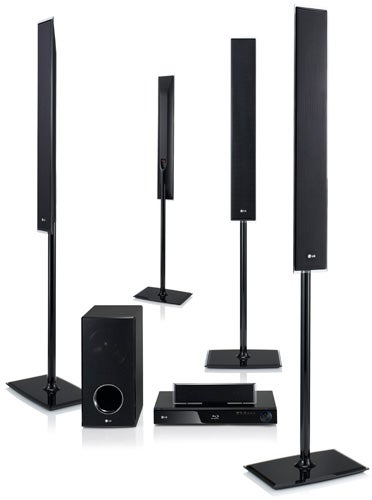 Whether or not this is the system for you depends largely on the type of speakers you can get away with in your living room. The tall floorstanding front and rear speakers included here are a lot more imposing than the bookshelf variety, and therefore harder to place if space is tight. If so, one of LG’s more discreet systems might be worth considering, such as the HB905SA and its five compact sats.


The HB965TZ’s speakers might be big, but they’re tremendously attractive. They’re finished in black with an appealing transparent trim around the edge, which matches LG’s latest TVs perfectly. Each one can either be perched on top of thin pole stands or wall-mounted using the supplied brackets.

Joining these in the line-up is a thin centre speaker, styled to match the others and aligned horizontally to slip easily under your TV, plus a subwoofer. Like most one-box systems the sub is passive (i.e. it doesn’t use its own power supply) which doesn’t always guarantee the most effective bass performance, but it’s a lovely-looking unit with a pleasing gloss-black finish.


However, the Blu-ray receiver unit is where all the action is. Much like the BD570, the list of features on offer is staggering. Blu-ray is obviously this system’s raison d’etre and on that score the Profile 2.0 player does everything you’d expect, such as decoding HD audio formats, playing movies in 1080/24p and providing access to BonusView and BD Live material. 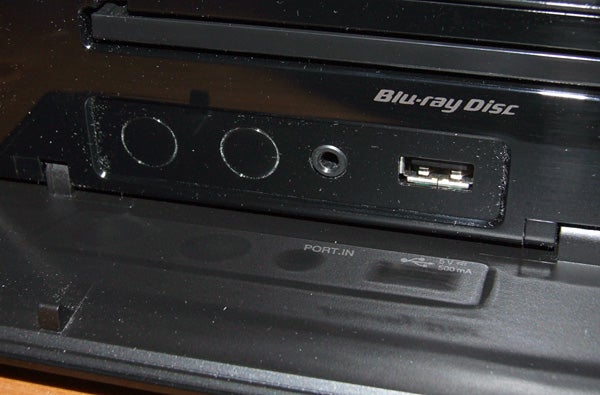 But what jumps out most is the range of networking features, made possible by the inclusion of a built-in Wi-Fi module that supports 802.11b/g/n (or an Ethernet port on the back for non-wireless setups). You can stream content from DLNA devices on your home network, access LG’s NetCast Internet portal or download BD Live content onto a connected USB storage device wirelessly.


It’s worth reiterating that the NetCast’s three applications (YouTube, Picasa and AccuWeather.com) can’t compete with the breadth of content offered by Sony’s BRAVIA Internet Video or Samsung’s Internet@TV services, but they’re a fun way of killing time and we love the inventive graphics used by NetCast’s main menu.

Other stand-out features include the iPod/iPhone dock built into the unit’s front panel – which can be conveniently shut away when not in use – and a USB port next to it that supports a wide variety of media formats from flash drives and external HDDs. It plays MKV, DivX HD, MP3, WMA, JPEG, WAV and more, making it a versatile hub for your entire media library, not just Blu-ray discs.

There’s a ton of funky sound features designed to spice up movie and music playback, including Virtual Sound Matrix, which claims to expand 5.1 sound to 10.1 but really just provides a fuller, richer soundstage. It’s joined by Clear Voice, which emphasises dialogue, Natural Plus, which aims to ‘balance’ the sound, and Music Re-Touch, which tries to enhance the quality of compressed music. Load up a CD and the system will also download info from the online Gracenote database, plus you can record CD tracks directly onto USB devices at 128, 192, 320kbps or losslessly. 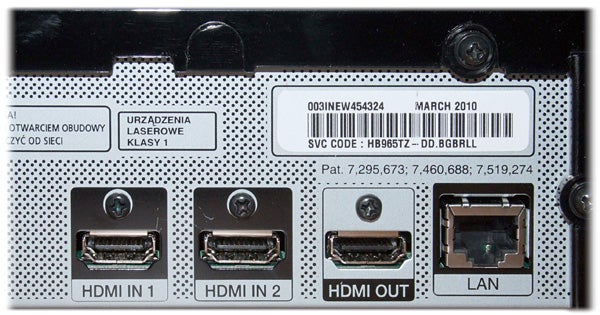 All of the sockets and buttons on the main unit’s front panel are hidden away behind a flap, which makes the unit look sleek and minimal despite having much chunkier measurements than your average Blu-ray player. The volume dial pokes through the flap and is accentuated by a blue light, next to which is a display panel that could do with being a bit bigger and brighter. 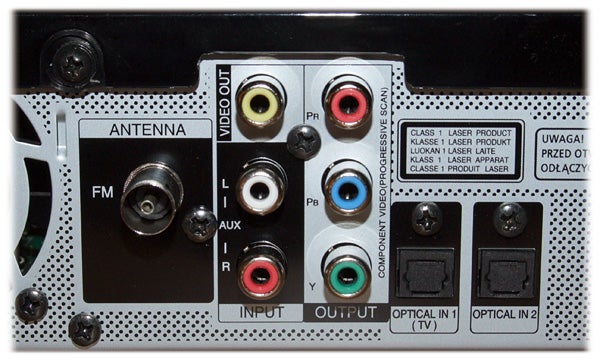 The rear panel is a cut above your average all-in-one system fare, mainly thanks to the inclusion of two HDMI inputs. That means you can connect this system and two other devices to a single HDMI input on your TV. These are backed up by two optical digital and analogue stereo inputs for any other kit you want to channel through the system, plus component and composite video outputs. The HDMI output is v1.3, which rules out any future 3D support – if that’s what you’re after, check out LG’s HX995TZ. 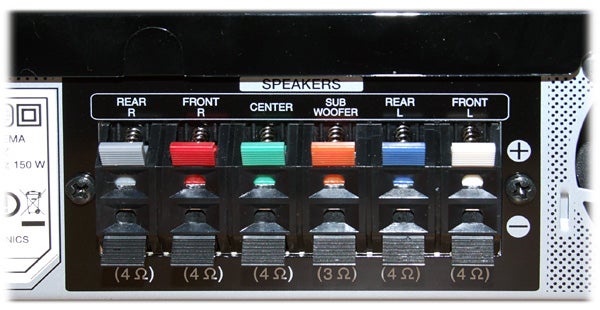 Colour-coded cables and excellent instructions make installation easy, and the remote is a joy to use. Onscreen, the menu system is the same one used by the BD570 and therefore shares the same pros and cons. On the plus side, it’s gob-smackingly attractive and innovative – the home menu’s icons are inside blocks of ice bobbing about in a tank of water – but the over-exuberant graphics clearly take up too much processing power and result in sluggish reactions to remote commands. 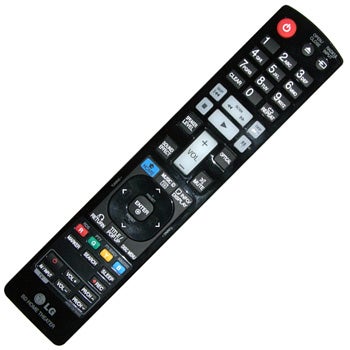 Once you come to terms with this pervasive sluggishness, set-up and operation are self-explanatory. The wireless functionality is a breeze to set up thanks to clear onscreen dialogue boxes, while the DLNA menus are superbly presented. There’s no auto calibration, but the levels are so easy to tweak (thanks to the terrific onscreen graphics) that it’s no great loss. Disc loading times are roughly similar to the BD570 (around 50 seconds for ”Terminator Salvation”).

In terms of sound quality, we always approach one-box systems with a certain degree of trepidation, but any such scepticism was shrugged off after a few minutes in this system’s company.


We checked out the barnstorming sequence in ”Hellboy II: The Golden Army”, in which our titular hero squares up to the Forest God, and it’s an incredibly thrilling listen. The sound is crisp and sparky, with lots of bite in the high frequencies – as evidenced by the smashing of glass and crashing cars – plus dialogue is prominent and bottom end sounds are punchy and muscular. Some of the louder low frequency effects cause a touch of boominess from the sub but on the whole it melds surprisingly well with the other speakers and provides a solid foundation. 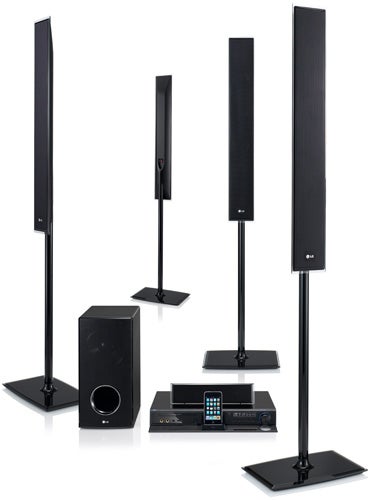 What’s most impressive is that the speakers avoid the harshness that plagues many one box systems, showing the sort of control and power-handling poise normally reserved for more expensive separate systems. It’s also a dazzling conductor of surround effects, zapping them around the room with pace and precision and plunging you into an immersive, absorbing soundstage.


Many of these qualities seep into the system’s music playback – it brings a wealth of detail to subtle, intricate jazz recordings but give it a driving rock song and it has the power and timing to have you moshing round the room like Iggy Pop on speed.


Blu-ray picture quality is also impressive, but given the BD570’s solid performance that’s no great surprise. The opening exchange between Helena Bonham Carter and Sam Worthington in ”Terminator Salvation” is a showcase of beautifully rendered close-up detail – Worthington’s 5 o’clock shadow is clear as day – while the contrast between light and shade within the dingy cell is superbly reproduced. As with the BD570, ugly artefacts make upscaled DVDs look less impressive but still watchable.


With its cavalcade of features, eye-catching looks and excellent sound quality, the HB965TZ represents superb value for money. The operating system is a little sluggish, and its lack of 3D support and limited Internet content might push some buyers towards the Sony BDV-E370, but in every other respect the HB965TZ is one of the best one-box systems on the market – particularly when it comes to the all-important AV performance.