LG has had great success with its recent low-cost touchscreen phones and the company intends to build upon this foundation with its latest model. Dubbed the Pop, the GD510 is the smallest 3in touchscreen phone on the market, which is quite some achievement considering how small some of LG’s previous phones have been. The question is, has this shrinking down resulted in a compromised handset? Let’s take a closer look to find out.


The first thing one notices about this phone is how small it ”actually” is – it’s just 97 x 50 x 11mm and weighs only 87g. LG has also nailed the design by going for a very simplistic look. Only one button adorns the front while the back has just the camera lens tucked in one corner and the LG logo in the other. The choice of a simple brushed metal effect on the back and silver paint on the front is also very elegant, though real metal would obviously have been preferable. 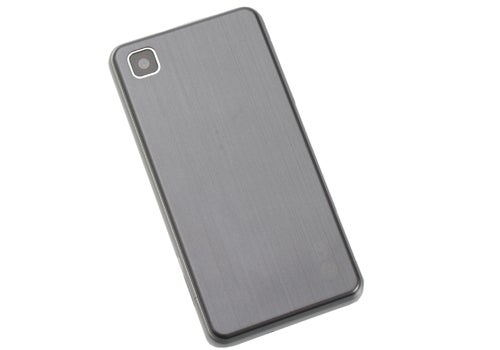 Along the sides are a few more buttons and flaps but they’ve all been neatly integrated thereby enhancing rather than detracting from the design. In particular, you get a lanyard loop and volume rocker in the top left, a power/lock button on the top, a micro-USB port on the left side (which sadly doubles as the headset socket and no headphone adapter is provided in the box), and the combined camera and multitasking button on the right. When pressed briefly, the latter will bring up the multitasking menu, which shows a list of running programs (and allows you to close them) and a grid of shortcuts to your favourite programs. Holding the button down opens the camera application. 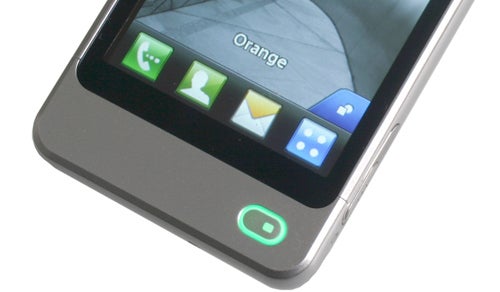 As for the button on the front, it also performs multiple functions and is even colour-coded to signify what mode it’s in. When the phone is locked, it is white and unlit but when turned on and you’ve an incoming call or are just at the home screen, the button is green and so pressing it will answer the call or open the call log. While in a call or once you have a program open, the button will turn red indicating that it can now be used to end the call or close the program. It even acts as a ‘back’ button in nested menus, taking you one step back up the menu tree on every press. It’s a clever yet simple system that really elevates the usability of this phone.

While on the subject of usability, we also like that LG has adopted the, fast becoming standard, slide-to-unlock system whereby, after pressing any button, you simply slide a finger up the screen to unlock the phone. We also like the status dialogue that appears when you tap the top of the homescreen. This displays detailed information about time, battery life, signal strength, and memory usage (both onboard and of the memory card) as well as giving you quick access to select a profile (silent, meeting, normal, etc.), play and pause music, and turn Bluetooth on or off. 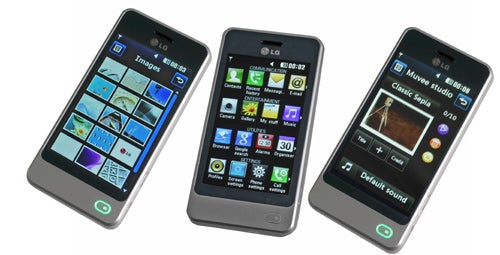 Elsewhere the operating system is essentially the same one that we’ve seen on LG’s phones for some time. The homescreen consists of three desktops, which you can slide left and right with the annoying, slow, and cumbersome rotating cube effect that LG insists on using. On the first screen you can put widgets, which are the usual selection of apps like a calendar, picture viewer, analogue clock, and music player. The second screen is dedicated to what LG calls Livesquare, which basically shows you little avatars of your favourite contacts along with message notifications for each one. You can then drag the avatar to the message or call icons to either message or call them. You can even highlight multiple avatars and send group messages. It could be useful on occasion but we feel that for most people it will be a seldom used gimmick. The third screen is simply for dragging and dropping links to your favourite contacts. 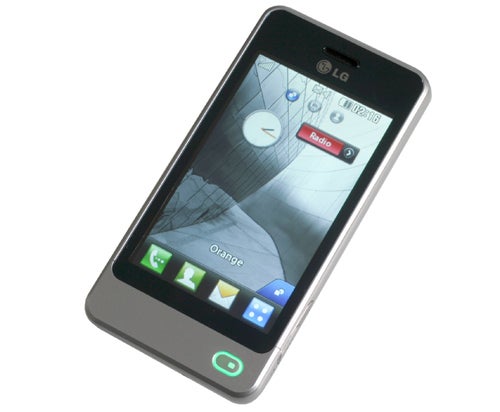 The main menu by default uses a peculiar sideways scrolling array of icons that we again find cumbersome and unnecessary. You can, however, revert to a simpler tabbed layout of fixed icons that is much easier to navigate.


The rest of the operating system is basic and a bit slow but is easy enough to use. However, the web browser is distinctly tedious to use so those that want to regularly browse on the move should probably steer clear. Then again, with this being a non-3G phone that also lacks Wi-Fi, web browsing was always going to require the patience of a saint. 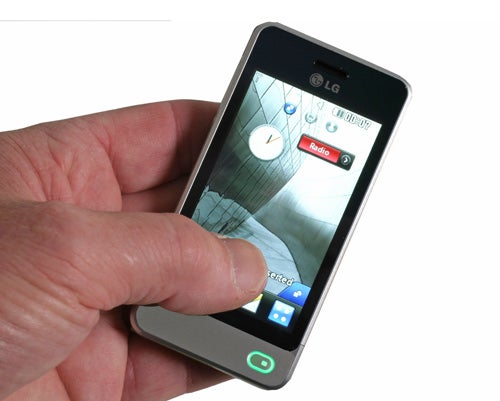 Something that will also slow you down is the use of a soft resistive touchscreen. With its lack of multitouch and requirement of pressure to activate the screen, typing speed in particular is slowed down to the point where the QWERTY keyboard is next to useless and the keypad layout will instead be your primary port of call. The softness of the screen will of course make it prone to scratches as well.

To look at, the screen is neither exceptionally good or bad, it’s merely an okay colour LCD display. It’s plenty sharp enough, viewing angles are good, and there’s enough colour and brightness to make it usable on sunny days as well as enjoy videos (though very few video formats seemed to be supported). The only thing that’s lacking is resolution, which stands at just 240 x 400 pixels. This combined with particularly poor text scaling is another thing that really inhibits the web browsing experience.

As for the camera, this is a very basic 3-megapixel unit that lacks both autofocus and flash. Nonetheless, it produces passable photos with accurate colours and a reasonable amount of detail. Video, on the other hand, has too low a framerate to be of much use. 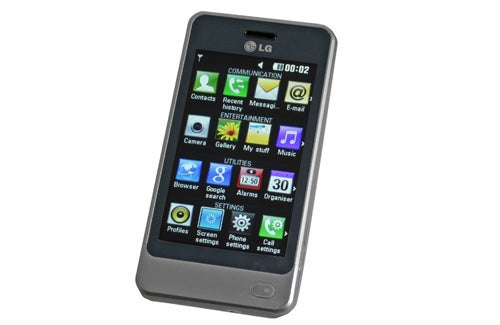 Underneath the battery cover is the SIM slot, a microSD slot (that supports cards up to 8GB), and of course the battery, which is a 900mAh unit. We’ve now come up with a standard test procedure for battery life that consists of playing two hours of mp3s with the screen off, watching two hours of video with the screen at full brightness, and browsing the web for an hour (a custom made page constantly refreshes itself every minute) then recording the remaining battery life. Sadly, this phone’s poor video support meant we had to use a different video clip to the one we normally use. It also doesn’t report the exact battery level and we had to rely on the number of bars on the little battery icon. By the by, one of the three bars was still remaining after our tests. LG reports standby and talk times of 15 days and 3.6hrs.

However, despite putting in a reasonable performance when it comes to battery life and having some neat touches in its design and interface, our overall impression of the GD510 Pop is that it’s a bit pointless. It has a largish screen but is poor when it comes to doing anything that takes advantage of it – namely browsing the web and watching video. If LG kept the same design but put a headphone jack on it and improved video playback and web browsing, it could be a great small phone (even without 3G and Wi-Fi, etc.) but as it stands, for a phone with such limited functionality, we’d rather have one with a smaller screen and a decent keypad.


With its small body and neat design, the LG GD510 Pop could have been a great low-cost touchscreen phone and certainly it’s the best device of this type that LG has yet produced so if you’ve liked its previous designs, it’s well worth considering. However, for most users we feel LG has simply cut too many corners in the hardware, rendering the relatively large touchscreen essentially pointless. Ultimately, on a phone this basic, we’d rather have a sturdier design with some proper buttons for text entry. 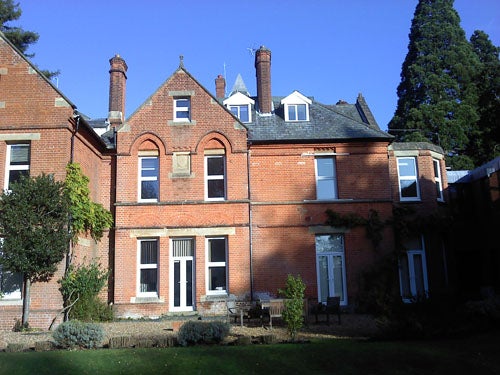 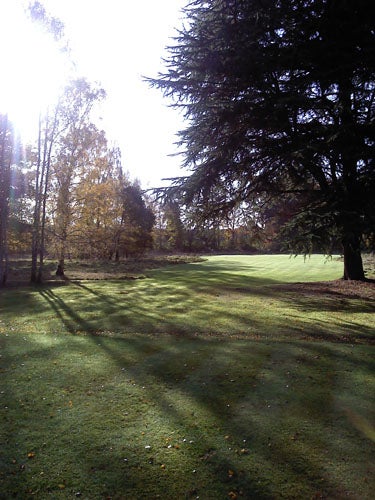 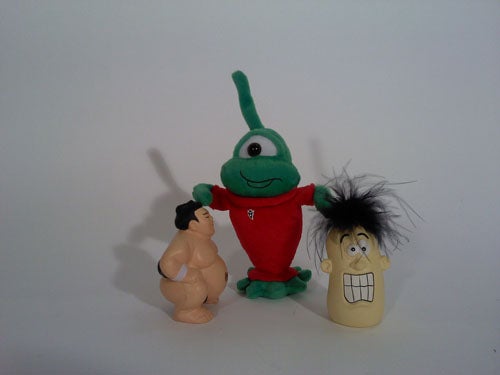