The battle between Blu-ray and HD DVD isn’t only being fought in the home cinema arena. Which format will become the de facto optical standard in computers is just as important to both camps, so it comes as no surprise that I have a Blu-ray writer sitting in front of me right now.


One of the advantages that Blu-ray had over HD DVD was that it was set to be a writable format straight out of the gate, and the Blu-ray consortium definitely came through on that claim. In fact the first Blu-ray writer to arrive in the TrustedReviews lab was back in July 2006 as part of the Sony VAIO AR11S notebook, but full size PC drives have taken a bit longer to appear.


Of course you can also burn CDs, but bizarrely the GBW-H10N can write to CD-RW discs faster than CD-R discs – 10x compared to 8x respectively. Inserting a 52x CD-R in the drive confirmed that it would max out at 8x when writing. More worrying though was that the drive refused to even recognise a 32x CD-RW. The only slower CD-RW media I had to hand was an old 4x disc, which the GBW-H10N had no problem recognising and was happy to burn at 4x.


Considering that this is such a cutting edge bit of kit, I have to say that I was somewhat disappointed to find that it employed an EIDE interface as opposed to a SATA one. Most modern motherboards are cutting back on the amount of EIDE connectors in favour of SATA, so it would make sense for optical drive manufacturers to make the switch. At least LG bundles an EIDE cable in the box. 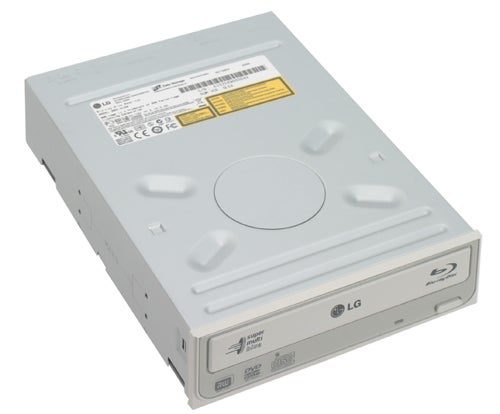 When it comes to writing data to Blu-ray discs, you’re going to need to have some time on your hands. Writing a 16GB single file to a write-once BD-R disc took near on 47 minutes, while the same test on a re-writable BD-RE disc took one hour 23 minutes – the time differential is down to the slower 2x performance using BD-RE media. If you’re going to burn masses of smaller files, you can expect even longer burn times. Writing 18GB of mixed files (digital images, MP3s etc.) took 55 minutes 25 seconds on BD-R and almost one hour and 40 minutes on BD-RE.

DVD writing performance wasn’t bad and equated reasonably with the drive’s quoted performance ratings. You’re looking at about six minutes to write approx. 4.5GB of data to DVD-R and DVD+R at the rated 12x. The GBW-H10N was happy to burn DVD-RW discs at its rated 6x, writing around 4.5GB of data in about 10 minutes. Unfortunately I only had 4x DVD+RW media to hand and the LG dutifully wrote the data accordingly. I’m sure that the drive would have written at 8x if I’d had 8x media to feed it. 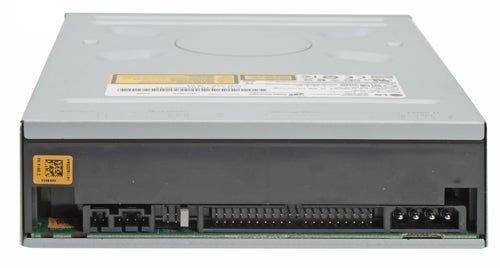 Bundled in the box is an LG branded copy of CyberLink’s BD Solution suite. Here you’ll find applications for backing up, burning data, authoring home movie discs and most importantly, playing Blu-ray movie discs. Unfortunately the Blu-ray enabled version of PowerDVD just refused to work, opting to crash whenever I tried to play a film. Obviously I made sure that this problem wasn’t a hardware conflict with my test rig, so I hooked the GBW-H10N up to another test rig with a completely fresh install of Windows, but still I was unable to watch a movie. At least on the new test rig it got as far as the menu on the disc, but then crashed out as soon as I tried to start the movie or jump to a scene.


After a bit more thought it occurred to me that both test rigs were using non HDCP compliant graphics cards, so next I hooked the GBW-H10N up to a rig with an nVidia 8800 nestling in the PCI Express slot. Firing up PowerDVD BD 6.6 again proved to be a far more enjoyable experience – this time it played back Blu-ray movies without any hint of a problem. So, if you’re planning on buying this drive to watch high definition Blu-ray movies, you better factor in the cost of a new graphics card if your current one doesn’t support HDCP. 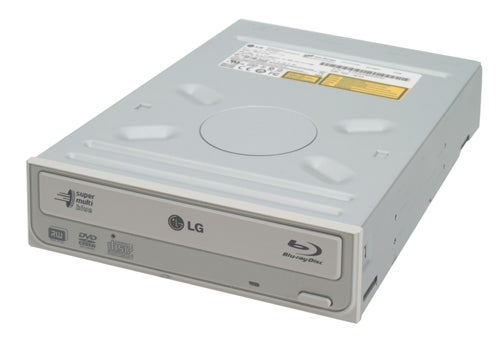 The other major consideration is cost and you’re going to have to dig deep for Blu-ray functionality. The GBW-H10N can be had on the street for around £435, which is a big price premium over a super-multi DVD writer, which you can pick up for around £30 these days. Of course you are gaining the ability to burn 25GB of data to a single disc, but the blank media is going to cost you around £10, so you’re probably going to only use that functionality when you absolutely have to. Then there’s the Blu-ray movie aspect, and assuming that you have a graphics card and monitor that are HDCP compliant, that can be a reasonably compelling argument. However, it’s worth remembering that come March, you’ll be able to buy a PS3 for the same cost as this drive!


The LG GBW-H10N is an impressive bit of kit, but you’re paying a lot of money for the Blu-ray functionality. Also, since LG has already announced a drive that can play both Blu-ray and HD DVD discs, you have to ask yourself if you’re willing to buy into only one of the next generation optical formats. If however you desperately need to archive up to 25GB of data to a single disc now, you probably won’t be put off by the price, but for most of us it’s worth waiting a while longer.