We are seriously not sure what programme
the LG D1484CF was running when it achieved a 38dB noise rating for the
energy label. Our measurements were not even close to this and we found
the LG really rather noisy by modern standards of premium dishwashers.

The
direct drive motor attached directly to the pump may not make a lot of
noise in itself, but the water inrush and valve noises, followed by the
sheer ferocity of the jets of water hitting the inside of the cabinet
drowned that out anyway. The valve opening and water inrush noise with
our fairly high pressure domestic water feed made an intrusive 65dB,
albeit briefly.

The high pressure water jets were clearly
giving our test plates a power-wash but the resulting noise averaged
52dB over the main wash period. While that is a long way off LG’s
claimed 38dB, it’s actually about the same noise of most mass-market
dishwashers and equivalent to the ambient noise in an office
environment. 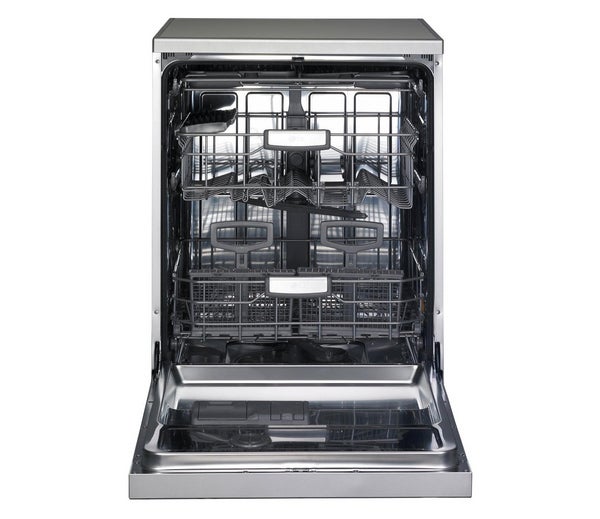 Our
standard dishwasher tests involve priming the machine and then running
two cycles with full load. As few people actually put the correct number
of place settings in a dishwasher we stack the machines with dirty
dishes, bowls and pans until it is full, exactly as you would in a
domestic environment.

Three key test ‘stains’ are included in
the main Auto wash, covering 24-hour dried on Weetabix and milk in a
ceramic bowl, 24-hour dried on scrambled egg in the Pyrex dish used to
cook the egg. A second full load wash on the machine’s Eco mode gives
the dishwasher a chance to show its green credentials to full effect.

Given
that it sounded like our plates were being sand-blasted, it was no
surprise cleaning results were good. Using a standard triple action
(salt, detergent, rinse-aid) tablet, the wine stain and grease on the
glass had been removed completely and the glass itself was polished, dry
and free from streaks. There was very feint water stain on the bowl of
the glass, indicating this machine is best used with dishwasher salt
from its main reservoir rather than multi-function tablets. The Weetabix
never stood a chance against the power of the direct drive motor and
high-pressure jets. 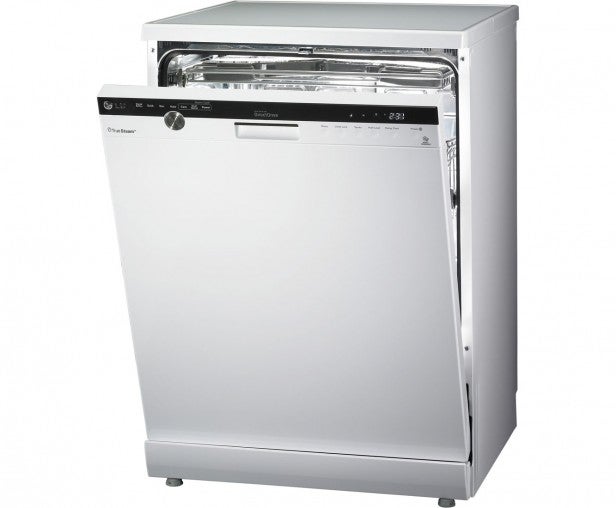 The scrambled egg test – an impossible task
to clean completely but useful as ‘stress test’ – was above average but
did still show a fine ridge of egg particles around the fill line. For a
budget machine this would be a good performance, but we hope for a
little more from premium machines such as this.

That said, engage
one of the LG’s Steam programmes and the results get better and better.
We found that seriously grubby plates and pots, particularly those
nearest the steam vents got a very good buffing. This brought the LG’s
cleaning performance well up to the mark, albeit at the expense of a
little more electricity than its regular Auto and super-frugal Eco
programmes.

The drying on all but the quick wash programme
proved exceptionally effective, particularly if you opened the door a
little and left the load half an hour before unloading. Running time for
the Auto wash was lengthy at two and three quarter hours and the Eco
mode went on for the best part of four hours.

For
a normal Automatic programme the LG uses around 1.3kWh of electricity
and a very reserved 14litres of water, which is a very respectable
result and on par with other A+++ rated machines. However, the LG
D1484CF’s Eco mode is truly green and with our lightly soiled second
test load, the Eco cycle used just 9 litres of water and a staggeringly
low 700Wh of electricity.

A dirtier load would no doubt trigger
the machine’s sensor to wash more intensely, but these figures are
already elevated slightly due to the to our mid-winter test meaning very
cold incoming water to heat. A superb result and our lowest running
cost dishwasher to date. 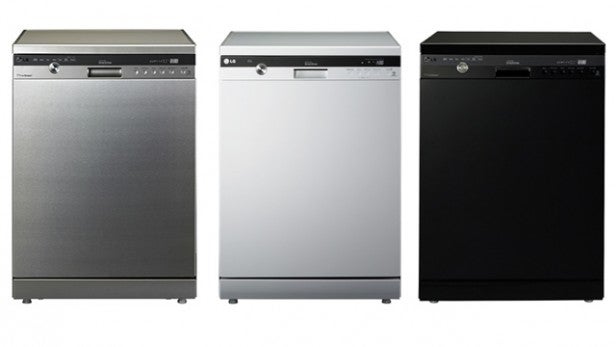 It’s
definitely worth considering. The LG D1484CF is a great looking and easy
to use and features one of the most flexible load configurations we
have yet to see on a full-size dishwasher. If you’re often left
scratching your head trying to fit things in, the LG is on to look at.

It’s
not quite good enough to earn our recommendation, however. While it’s
very flexible and one of the most efficient machines we’ve tested, it’s
on the noisy side for a machine this price and heavily soiled wash loads
need the Steam programme assistance for best results, which will
increase running costs.

A very flexible and efficient
machine that’s worth serious consideration, but we’d wait for the price
to drop as we think there are better machines at this price.