Want a home cinema system but don’t fancy shopping around for separates? Then LG has the answer. The BH9540TW throws everything you need in a single box, and we mean everything. This 9.1-channel system is so packed with features that we doubt you’ll ever leave the house again.

As the flagship system in LG’s latest range, this plentiful feature list should come as no surprise. But that also makes it more expensive than your average one-box system, sitting in the same premium price bracket as Samsung’s similarly feature-packed HT-H7750WM.

In the box is a Blu-ray player/receiver, four tallboy speakers for the fronts and rears, a centre speaker, a wireless receiver for the rear speakers and a passive subwoofer – not to mention all the speaker cables you need. 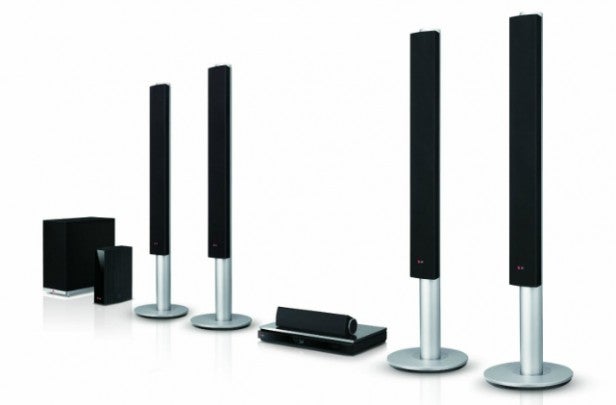 True to form, LG has designed this system for maximum visual impact. The tallboy speakers look stunning in their dashing combination of black speaker cloth, cylindrical silver stands and round bases. At the top of each tower is an upward-firing ‘top’ speaker that has its own separate channel, explaining how LG offers 9.1-channel sound (combined with the on-board sound processing).

The Blu-ray receiver is styled with equal panache. Its unusual but eye-catching two-tier design features a thick brushed silver plate sitting on a slim gloss-black body. The lower section sticks out slightly further, creating a ledge for a row of touch-sensitive controls, while the disc slot nestles between the two sections.

On the front is a large LED readout that displays all the pertinent info clearly, while a flap on the left drops down to reveal a USB port that can be used to play music, video and photos from storage devices and external HDDs. On the back, the generous array of sockets includes two HDMI inputs and one ARC output, optical digital and analogue stereo inputs, Ethernet, a second USB port and an input for the FM radio antenna.

You’ll notice there are only speaker terminals on the back for the front, centre and subwoofer channels – the other ones are located on the back of the supplied wireless receiver terminal, which you can place at the back of the room to avoid messy cables trailing across the carpet. While not exactly discreet, the receiver is styled in gloss black and stands upright to minimise its footprint. It receives surround information from a card slotted into the back of the main unit.

The centre speaker continues the towers’ striking design theme with the same cylindrical silver bodywork and black cloth grille. Its horizontal alignment and compact size makes it easy to position near your TV. That goes for the subwoofer too – with its slim shape, you could slide it down the side of the sofa or next to your TV, while the black/silver styling is surprisingly elegant for a sub.

In terms of overall build quality, there are traces of corner-cutting in places – sections of the speakers and the receiver’s top panel feel a bit plasticky – but we’d say it was better than the majority of one-box systems. 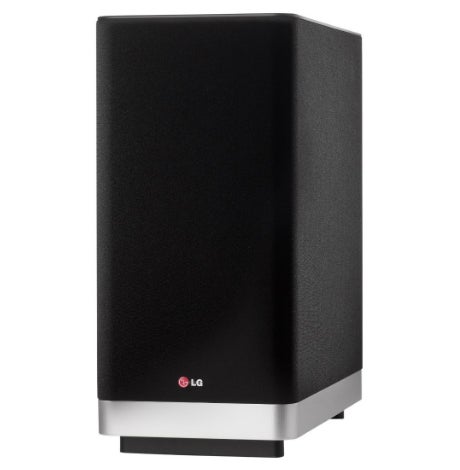 As you’d expect from a flagship system, the BH9540TW is teeming with features, ranging from basics like 3D Blu-ray playback and HD audio decoding to fancier tricks like 4K upscaling, DLNA file streaming (SmartShare) and Miracast.

With the latter you can replicate your Android smartphone’s screen on your TV, which is handy for games and videos. DLNA functionality is impressive – not only does it support a wide range of formats, but it also loads files quickly and plays HD videos in their native resolution. Format support includes DivX HD, MKV, XviD, WMV HD, AVI, FLV, 3GP, MP3, WMA, AAC, FLAC, OGG, WAV and JPEG.

You’ll also find Bluetooth music streaming and Private Sound Mode 2.0, which sends audio to a mobile device via Wi-Fi so you can listen without disturbing anyone.

LG is building up an arsenal of smart content to rival that of arch nemesis Samsung. Among the Premium apps are Spotify music streaming and Now TV, neither of which you’ll currently find on any other system. If you’re quick, LG is offering a free three-month Sky Movies Pass and seven Sky Sports Day passes when you buy the BH9540TW. The offer expires on August 21st 2014.

LG says the system kicks out a combined total of 1460W, with 180W from each of the front, rear and centre channels, 90W from each of the four top speakers and 200W from the sub. The speaker cones are fashioned from Aramid Fibre, which LG says is ‘highly resistant to external stimulus’ and therefore reduces distortion. 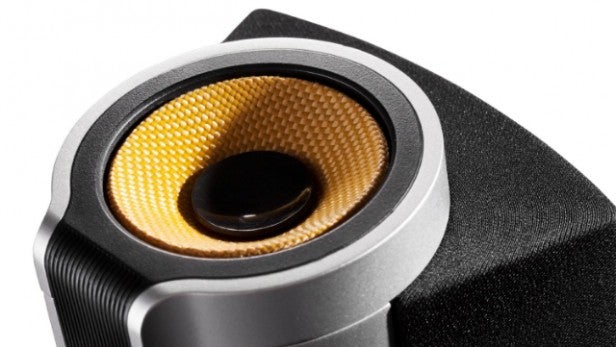 Finally Audyssey DSX-2 and LG’s 3D Surround Processor expand the soundstage using the top-firing drivers to push sound vertically as well as horizontally. It’s backed up by a plethora of sound presets and enhancements to play around with.

Putting the BH9540TW together isn’t a quick job – merely unboxing it will be enough to strike fear into the hearts of the impatient – but thankfully it’s easy to work out where everything goes, even without the assistance of the manual.

The three speaker parts have to be screwed together, and no doubt the wireless receiver and rear speakers will require a bit of room re-organisation. The supplied cables all feature chunky colour-coded plugs that snap satisfyingly into the matching sockets on the receiver. 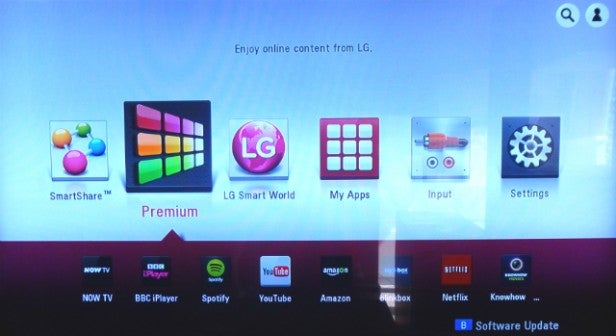 Fire up the system and you’ll encounter the same lavish onscreen menus as LG’s standalone Blu-ray decks. Their eye-catching design is warm and welcoming, making things easy for even the most technophobic user.

The Home menu features a row of tiles – DLNA, web content, inputs and setup. Highlight one, and corresponding options pop up in the banner at the bottom.

There’s no automatic calibration on board so you’ll have to do it manually from the ‘speaker setup’ menu. You can adjust the volume level and distance from the listening position for each speaker, including the top channels. Pressing the ‘speaker level’ button on the remote brings up the same adjustments during disc playback, handy for making on-the-fly tweaks. Other tweaks, such as network setup, output resolution and parental controls are all easy to locate within this well organised menu. 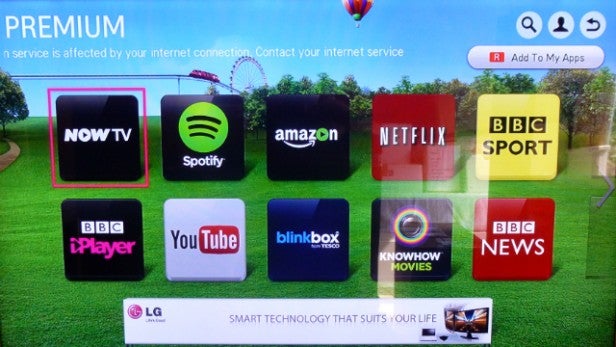 LG’s internet content is split into two sections – Premium and LG Smart World. Premium houses the big-name apps, while LG Smart World houses games, puzzles and niche stuff like Red Bull TV and Solar System Planets. To use apps in LG Smart World you’ll need to register with LG and in some cases pay to download them. The Premium menu looks dazzling, superimposing the icons over an image of a park.

The other menus are attractive and logical – whether you’re exploring music files on a connected NAS drive or switching inputs, the BH9540TW does it in style. The cursor moves quickly and apps load up without long delays. Only the built-in web browser feels cumbersome, but LG’s optional Magic Remote, USB mouse and keyboard makes it easier to control.

The standard remote is a long, slender affair with chunky rubber buttons and foolproof labelling. LG makes it easy to control with the lights down thanks to glow-in-the-dark playback keys, while the volume controls are placed on a hump so you can find them without looking. It’s well laid out and uncluttered, a great example of remote design. But if you don’t get on with it you can use LG’s remote app on your smartphone instead.

It’s clear from the off that the BH9540TW has been designed to deliver maximum bang for your buck. Not only is it immensely powerful, mustering a massive, room-filling sound with solid bass presence, but its tone is also crisp and aggressive – all of which makes for a very exciting listen, if not always a comfortable one.

The BH9540TW really gets a chance to flex its muscles during The Hobbit: An Unexpected Journey on Blu-ray. The movie’s prologue, which shows Smaug’s attack on Erebor and Dale, is an absolute riot – when the dragon first descends through the trees and blasts Erebor’s outer walls with fire, the bassy roar and sharp crackle flood the room.

The subsequent carnage is conveyed with similar gusto. As the dragon swoops around roasting villagers and demolishing buildings, the explosions are forceful and weighty, while other sonic elements like the dramatic score and despairing voices are given due prominence within the expansive soundstage.

You also get a convincing sense of the beast’s size and position through smooth, accurate steering and judicious use of the subwoofer, which integrates seamlessly with the other speakers. It’s surprisingly well controlled and agile for a passive sub – when Smaug breaks down the door and stomps along the passage, his footsteps are deep and hefty but don’t overstay their welcome.

Dialogue comes through clearly too – Ian Holm’s narration at the start boasts impressive depth and detail. In fact the system digs out plenty of high-frequency detail, adding texture and openness to quieter scenes – although it lacks the ease and refinement of better-quality speakers like the Q Acoustics 7000i system.

We’re also impressed by the 9.1-channel 3D Surround Processor, which generates a wider and more involving soundstage than the standard ‘Bypass’ mode. We could detect an element of height in the ambient hum that surrounds Gandalf and Bilbo as they chat on the doorstep of Bag End.

It’s not all good news though. The BH9540TW’s aggressive tone is terrific for grabbing your attention and certainly keeps you entertained, but it also has a touch of brashness that takes its toll with prolonged listening, particularly at high volumes. The hard edge to the roaring beasts, clashing swords and screeching goblins will have you reaching for the volume dial after a while.

Musically the system does a decent job, offering a well-balanced presentation of our test tracks. With Incognito’s Amplified Soul, there’s pleasing clarity to the percussion and cymbals and the sub keeps pace with walking funk basslines and kick drums. Again the brash tone can be heard in the brass parts and some wailing vocals but it’s fine for day-to-day listening. 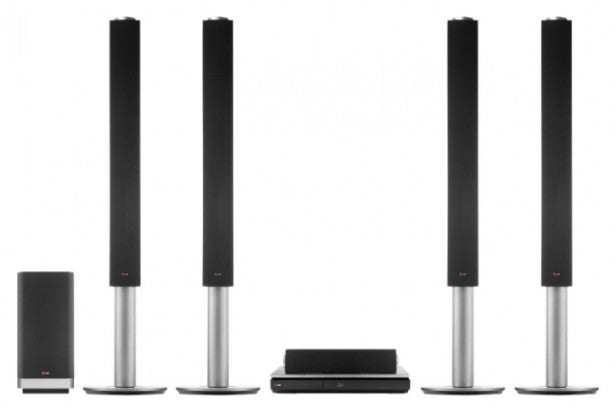 The LG BH9540TW is a relatively expensive all-in-one system, but justifies the price tag with a comprehensive feature list, stunning design and a powerful home cinema performance.

This formidable entertainment epicentre offers a wealth of connectivity (both wireless and wired) alongside support for 4K, 3D and countless multimedia formats. There’s a superb selection of internet content too, with Now TV and Spotify providing a tempting alternative to Samsung’s catch-up TV full house. The striking silver speakers and snazzy receiver will look great in any living room and wireless rears cut down the clutter.

Our only real qualm is the brash tone, which sounds exciting at first but becomes fatiguing. If you like your home cinema bracing and dynamic then you’ll love it, but for an easier, more insightful listen try investing in a decent separates system.

If you’re trying to decide between this and the Samsung HT-H7750WM, there’s practically nothing to separate them – they’re very similar in spec, price and sound quality. So the decision really comes down which design you prefer and whose line-up of internet content best takes your fancy (Samsung still gets our nod for the latter).