The BD670 is LG’s latest top-of-the-range Blu-ray player, offering Full HD 3D support and the company’s redesigned internet content portal, Smart TV. It’s up against some stiff competition from the likes of Panasonic, Philips and Korean arch rival Samsung – all of which have their own internet-connected apps and streaming talents – but as per usual LG has price on its side, bringing you a wide range of features without breaking the bank.

The deck’s design is unspectacular, using a drab black finish and no fancy embellishments to lift it beyond aesthetic mediocrity. The buttons on the front aren’t touch sensitive, the display panel is small to the point of being useless and there’s a fairly plasticky and flimsy feel to the disc tray. In its favour, the rest of the casing is fashioned from aluminium and it’s remarkably slim (49mm), allowing you to slot it into an AV rack with minimum fuss.


There’s a USB port on the front too (hidden under a rubber dust cover), which allows you to play a wide range of music, video and photo formats from memory devices and external hard-disk drives. Supported formats include DivX, XviD, AVI, MKV, WMV, MP3, WMA, WAV, m4a and JPEG. AVCHD can additionally be played back from recordable DVDs.

On the back is a sparse array of sockets, including an HDMI v1.4 output, component, composite and analogue stereo outputs, an optical digital audio output and an Ethernet port. There are no multichannel analogue outs and certainly no second HDMI output, which could be a dealbreaker if your AV receiver lacks HDMI v1.4 inputs and you want to watch 3D pictures with HD audio.

The lack of a second USB port is also slightly problematic given the lack of built-in memory for BD Live downloads, which means regular BD Live users will have a USB stick poking awkwardly from the front.

The BD670 is first and foremost a Blu-ray disc spinner, but it’s equipped with a nifty range of networking features that bring lots of extra content to the table – all of which can be accessed wirelessly thanks to the built-in Wi-Fi adapter (802.11a/b/g/n). 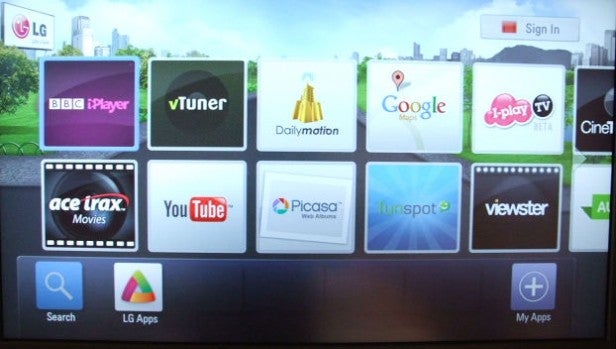 LG’s Smart TV portal provides a range of catch-up TV, video streaming and radio applications, including BBC iPlayer, YouTube, vTuner (internet radio), Picasa, Acetrax, Google Maps, AUPEO! radio, Dailymotion and lots more, most of which are of limited interest. Confusingly, these are all grouped under ‘Premium’ despite most of them being free. 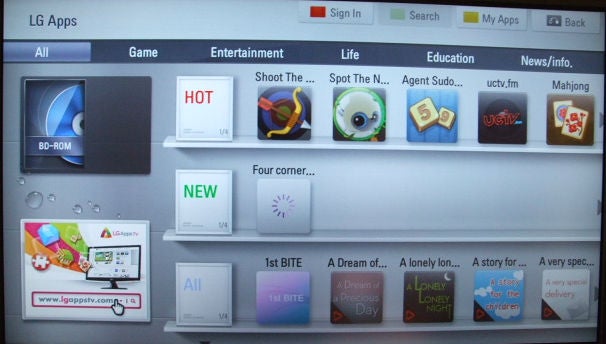 A separate area called LG Apps provides another batch of games, puzzles, movies and other curios like ‘Yoga Trainer’ and a colour blindness test, but you need to create an account in order to use them. These unusual apps add real value to the overall proposition – we imagine families with young kids will have a great deal of fun exploring these.

This impressive web offering is joined by DLNA support, allowing you to beam content across your home network from PCs, NAS drives and smartphones. It’s also Wi-Fi Direct compatible, which means you don’t even need to have a router to stream your content, plus the LG Remote feature allows you to download an app to your iPhone/iPod touch or Android phone and use it to control the BD670.

Finally the BD670 can access a Gracenote database that brings up details about any Blu-ray, CD or DVD you load up, and displays the album art while playing. Music ID is designed to look up songs featured in the disc you’re playing, although it has a fairly low success rate.

In action the BD670 works smoothly. We had no trouble streaming MP3s and WMA files over our ‘n’ Wi-Fi network, plus video streaming is remarkably robust whether you’re watching Smart TV content or your own files. Oddly, BBC iPlayer suffers from judder, but there are no buffering breaks at all. 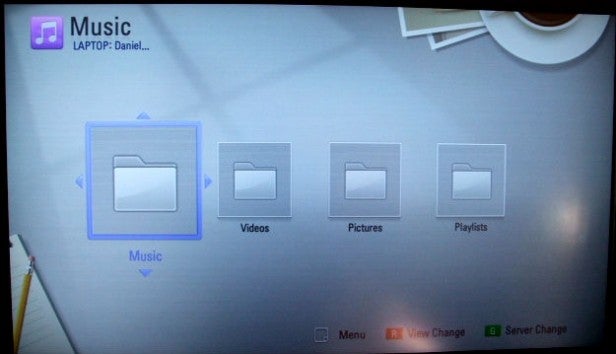 Day-to-day operation is also slick. The Home menu is your jump-off point for any function, a gorgeous-looking screen with cartoony graphics painted in funky colours. It can be summoned by a single press of the easy-to-spot Home key on the remote. It features a row of icons covering the main content areas, with the Music, Photo and Music buttons whisking you straight to the list of networked devices. Select the relevant one and your content is displayed in a clear, well-organised list.

The Premium option brings up an Android-like grid of Smart TV apps – with a bizarre but attractive picture of a street in the background – while the LG Apps interface cleverly makes it look like the icons are items on shelves in a shop. Smart indeed. 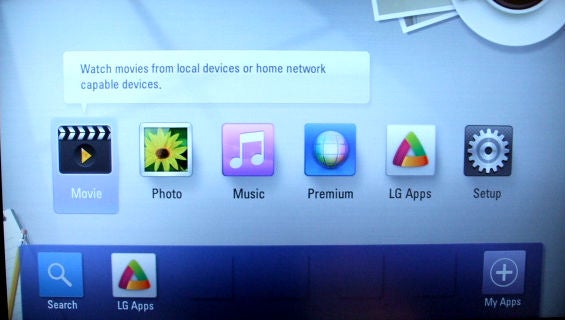 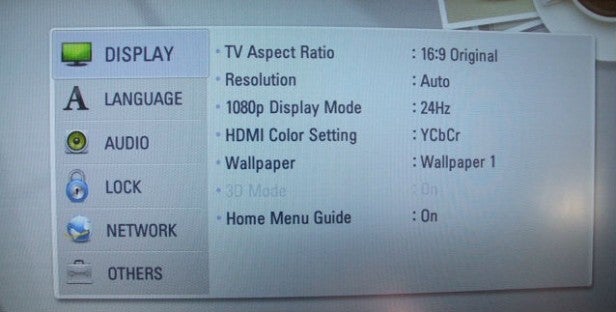 Setting up the player for wired or wireless network use couldn’t be simpler. Dialogue boxes take you through the process in plain English and the access point search is quick. Entering your password using the remote is as cumbersome as ever but overall it doesn’t take long to get online. The other essential tweaks are located in the setup menu, which boasts minimal submenus and a responsive cursor.

This level of simplicity continues with the remote, which isn’t overly cluttered and uses large lettering to help you find keys quickly. The playback buttons are segregated by colour and are placed on a bump, which is ergonomically satisfying, while the direction pad and corresponding keys are placed within easy reach of the thumb. All in all, this is a terrific zapper.

Disc loading is comparatively slow – Terminator Salvation’s opening video appeared after 58 seconds, and we’ve seen other players load this Java-packed disc in around 35. Other discs with less complex menus loaded a lot faster though.

When you reach the movie, image quality is superb. It plucks every pixel from the intensely detailed Children of Men Blu-ray and chucks them on screen with a sharpness and clarity that’ll convert HD refuseniks in an instant.

It misses none of the nuance in the grubby London street settings, picking out the clever futuristic background detail and giving at all a satisfyingly, deep cinematic lustre. Of course your TV has a big part to play in the quality of these pictures, but the LG holds up its end of the bargain.

The colour palette is nicely judged too. It’s not the easiest movie to get right, but the natural look of skin tones and leafy greens is testament to some decent chroma processing.

Onto 3D and the deck doesn’t put a foot wrong with our trusty Avatar disc. Again it’s at the mercy of the screen you’re watching it on, but the solid, blur-free objects, focused detail and impressive sense of depth can only mean that the deck is doing a good job.

Next we ran through the Silicon Optix Blu-ray and DVD discs, and with the former there’s some flickering on the Film and Video Resolution Loss test that indicates some processing shortcomings, but elsewhere there are no jaggies and camera pans over fine detail look smooth. Upscaled DVDs are generally free from jaggies and reasonably detailed, although close inspection reveals a slightly gauzy look to the picture.

We also played CDs on the BD670 through our reference system (using both HDMI and analogue stereo outputs) and were satisfied with the nicely balanced sound on offer, rather than being blown away by it.

Verdict
The BD670 is an impressive Blu-ray deck that makes a great case for a place high up on your shopping list. It boasts built-in Wi-Fi, DLNA media streaming, much-improved web content over previous LG players and wide digital media support.

Finding a Blu-ray player with this many features for under 150 quid is a real boon, and for that reason it scores highly on value. Only the slightly workmanlike looks, occasionally ropey build quality and the single USB port let the side down – otherwise the BD670 is among the best budget Blu-ray decks around.