For the past few years now, LG’s TV story has essentially been an OLED story. However, this doesn’t mean that the brand’s LCD department has been sitting on its R&D hands, relying solely on ever-reducing prices to keep its LCD sales bubbling along.

A couple of years back it introduced its first Nano Cell TVs. This technology is similar to Quantum Dot, except that it boosts viewing angles by placing its RGB ‘dots’ directly onto the LCD modules, rather than in a separate film.

Now, for 2018, LG is further advancing its LCD cause by introducing Full Array Local Dimming (FALD) technology to the flagship SK9500 series, represented here by the 65-inch 65SK9500. 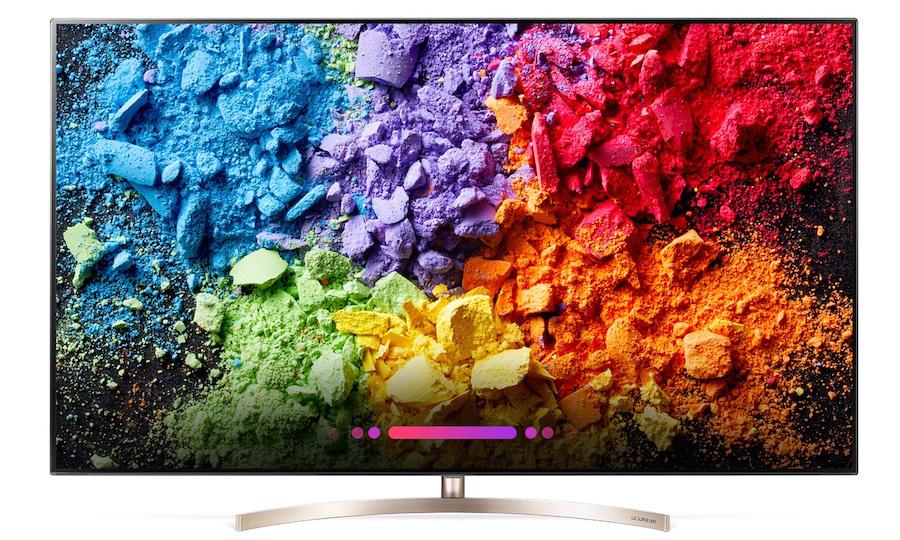 This means two things. First, the screen is illuminated by LEDs directly behind the screen rather than around its edges. Second, sections of those LEDs can simultaneously output different levels of light, as suits the picture.

Put these two things together, and experience shows that it’s possible to achieve much better contrast performance than seen with more common edge-lit screens. This is especially important in today’s high dynamic range (HDR) TV world. Even more so when you’re talking about LG’s traditionally contrast-challenged ‘IPS-type’ LCD panels.

Accommodating a direct backlighting system has required LG to lose the incredible, OLED-like slimness of 2017’s SJ9500 range. Where much of the SJ9500’s rear stuck out only a few millimetres, on the 65-inch SK9500 the side panels alone are nearly three times as deep. The rest of the curved back panel also then stretches out a good few extra centimetres further.

Some may rue this design change, I guess. Personally, though, I watch my TVs from the front rather than the back. And from the front I’d say I actually prefer the SK9500’s dark, subtle finish to that of the SJ9500. 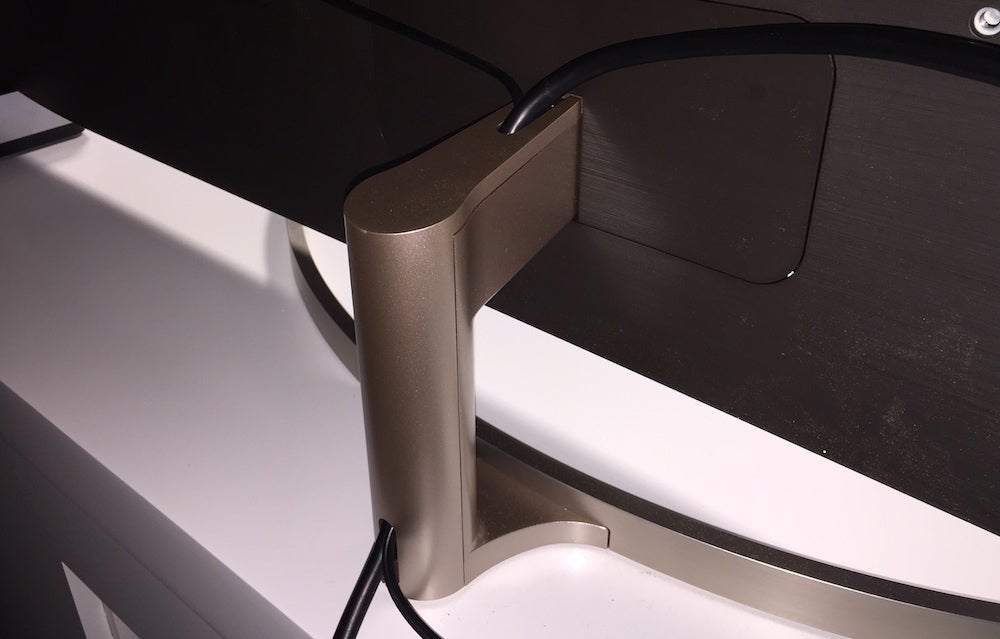 Its stand is better too. It shares the same half-moon metal bar shape, but its front is vertical rather than angled back. This means it doesn’t catch the light as distractingly as the the SJ9500’s stand.

A channel in the rear of the stand ‘neck’, meanwhile, allows you to pretty much eliminate visible cable clutter. As with all 2018’s ‘Super UHD’ LG LCD TVs, the 65KS9500 supports the Dolby Vision HDR format as well as the more widely available HDR10 and HLG platforms.

It also joins its cheaper 2018 Super UHD siblings in being driven by LG’s new ‘Alpha 7’ processing system. This is broadly similar to the processing system used on LG’s 2017 OLED TVs, except that it adds Black Frame Insertion to the picture mix.

BFI has long been accepted as a premium way of improving motion playback. Certainly, during a head-to-head demo of the 65SK9500 versus last year’s 65SJ9500, it delivered vast motion improvement. Both judder and, especially, motion blur and trailing were almost completely removed. What’s more, this appeared to have been delivered without causing the flickering or loss of brightness that black frame insertion systems usually cause. 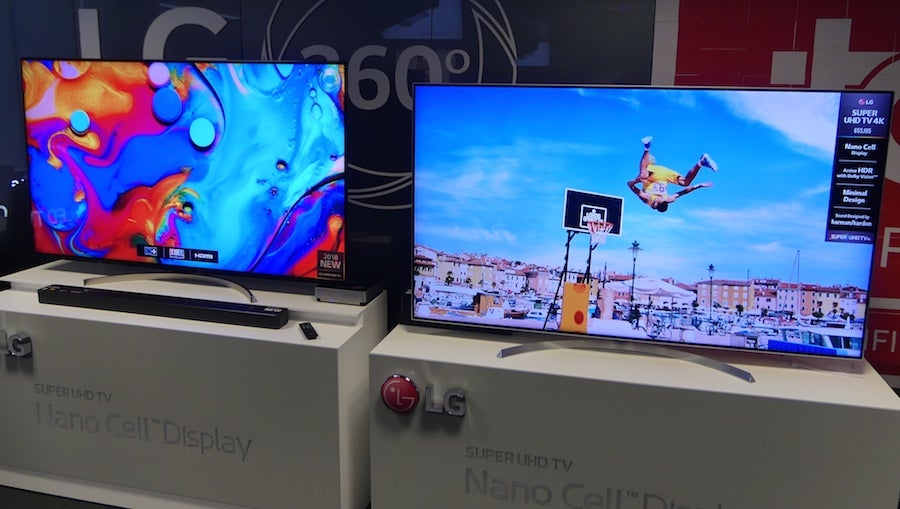 On the contrary, the 65SK9500’s pictures actually look much brighter than those of last year’s equivalent model, even with BFI active.

This is especially true when a bright object appears against a dark backdrop. LG showed a test signal during its demo of white diagonal lines against a black backdrop, and these lines looked far punchier on the 65KS9500. Similarly, a short video loop of brightly coloured tablets dropping into dark water displayed much richer, more vibrant colours, as well as far more punchy whites in the disturbed water around the plunging tablets. 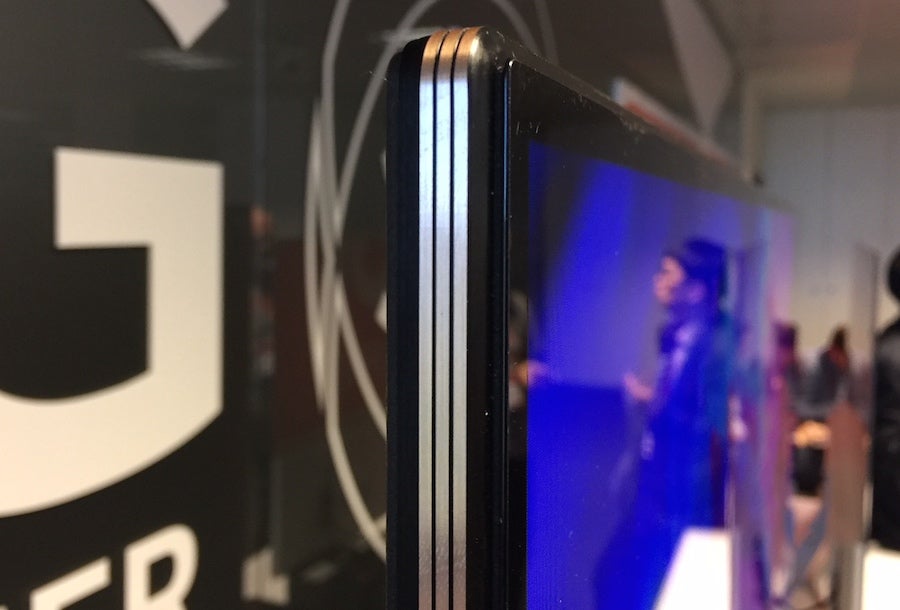 This is not to say that the 65KS9500 delivers perfectly inky blackness around bright highlights, however. With the white diagonal lines, even in the fairly bright demo room that LG was using, you could clearly make out clouds or ‘blooms’ of light extending into the darkness 3-4 inches either side of each line.

LG wouldn’t reveal how many individually controllable dimming zones the 65KS9500’s screen uses, but clearly we’re not talking hundreds. The IPS panel may not be helping here, either.

In the video loop of tablets dropping into the dark water, the 65KS9500 again displayed a fairly distinct and extended halo of light around the tablet that tracked its movement through the dark backdrop.

As well as looking much less punchy on the 65JS9500 model, the tablets were tracked as they crossed the screen by a vertical bar of light extending more or less the full height of the image – a result of the lights being mounted in the screen’s edges rather than directly behind it.

While the light spread over a larger area on the edge-lit 2017 model, however, the smaller bloom around the bright areas on the 65KS9500 looked more intense. So it was arguably at least as distracting. 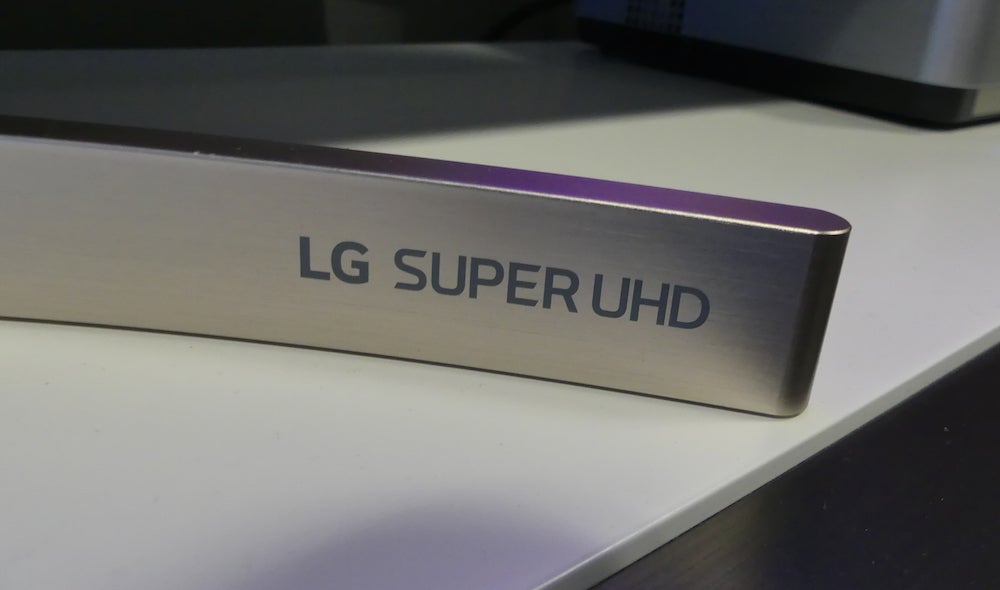 But before we get too concerned about this, note that we didn’t get the opportunity to play around with the 65KS9500’s settings. Experience suggests that if we had, we may well have found settings that would reduce this blooming considerably – at the expense of a little black level depth or brightness, say.

Also, in every other way we could see during LG’s demo, the 65KS9500 looked comfortably superior to its predecessor. Colours are richer. Peak brightness is markedly higher. General contrast levels are superior. Motion is, as discussed, vastly improved, which in turn helps pictures look more detailed and crisp.

As well as clearly having the potential to deliver a far superior picture performance to its predecessor, the 65KS9500 will benefit from LG’s latest ‘ThinQ AI’ technology. This is essentially a souped-up voice control system, along with the ability to monitor and even control other devices around the home.

We weren’t able to experience the ‘smart home’ features in action since they’re not yet ready; they’ll be coming to LG’s TVs via a firmware update later in the year. However, we were given a pretty comprehensive demo of the new voice control system, and it looks rather impressive. Especially when it comes to navigate shows and channels on the channel guide – an area many rival TV voice control systems tend to largely forget about.

All in all, we’re looking forward to getting a 65KS9500 on our test benches. Especially if LG prices it in the same, pretty affordable ball park as last year’s 65JS9500. Watch this space.