Ever wanted to stand up, walk over to your TV, pick up a huge electronic pen and scribble directly onto your TV’s screen? Um, no, us neither. But hey: thanks to new PenTouch technology on LG’s 50PZ850 telly, direct-to-TV scribbling is now a possibility. And who knows: maybe our eyes will be opened to a whole new world of TV interaction that we never even knew we wanted!

The first thing the 50PZ850 adds to our realm of TV experience, though, is a bad back. The specially toughened glass LG has had to stick onto this PenTouch 50in plasma TV makes the set weigh an absolute ton. Just as well you likely won’t be thinking of wall-hanging the thing given the need for you and your kids to be able to easily reach the screen for drawing on it.

As well as being unusually heavy, the 50PZ850 is unusually shiny. Its bezel is adorned in a distinctive and attractive metallic finish. It certainly makes the TV feel a bit more friendly and approachable than the black finishes LG usually prefers. 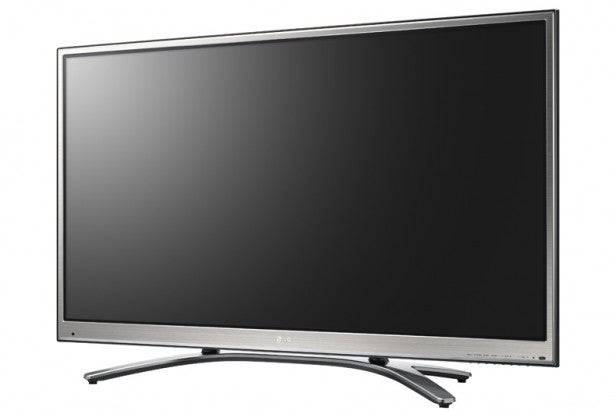 Not surprisingly – and fortunately, as it will turn out – the 50PZ850 does not rely on PenTouch alone for its feature appeal. It’s also got active 3D playback, and a degree of multimedia functionality – though crucially and rather bizarrely, this latter functionality does not stretch to compatibility with LG’s Smart TV online service.

Regular readers may be surprised to learn that the 50PZ850 uses active 3D rather than the passive 3D system LG usually eulogises. But the need to apply a pen right onto the 50PZ850’s screen wouldn’t have been compatible at all with the filter that has to go across the front of passive 3D TVs. Furthermore, LG continues to say that plasma technology just isn’t compatible with passive 3D tech on account of its brightness limitations.

As a result of the 50PZ850 using the active 3D approach, you only get a single pair of glasses included for free, with other pairs costing you upwards of £70 each. This obviously doesn’t compare favourably with the provision of seven free pairs of 3D glasses with LG’s passive 3D TVs.

But of course, it’s not common for any active 3D TV to ship with lots of 3D glasses, so comparing like with like, we guess the single free pair you get with the 50PZ850 is tolerable, if hardly generous. 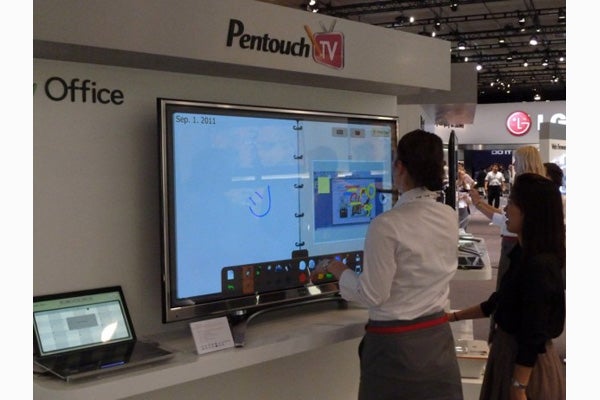 With regards to the multimedia features we mentioned, the TV offers playback of a good range of photo, music and video files from USB storage devices or networked PCs (the latter via an Ethernet port that’s also on hand as mandatory support for the set’s integrated Freeview HD tuner).

As usual with LG’s plasma TVs, the 50PZ850 is exceptionally well-stocked with picture calibration tools, including white balance adjustments, a colour management system, and gamma controls. As a result, it has the support of the Imaging Science Foundation (ISF), who will come around and professionally calibrate the screen for you – so long as you pay them for the privelege, of course!

Of wider interest to most people is likely the 50PZ850’s THX endorsement. For as well as being a third-party ‘seal of approval’ on the 50PZ850’s picture quality, the THX support also runs to a couple of decent – for films, at least – picture presets.

In starting to ‘live with’ the 50PZ850, we have to start with the unusual PenTouch functionality. Which immediately causes a problem, for it’s not just as simple as whipping out one of the two ‘pens’ provided and starting to scribble away.

First yo have to pop a USB dongle into your PC, and get it ‘talking to’ the pen thingies. Then you have to set up your PC screen, start the PenTouch software running, and fire up the TV’s PenTouch feature. And before you ask, our use of ‘PC’ back there is entirely deliberate, as there’s currently no support for the ever-so-slightly popular Apple Mac OS.

In short, getting PenTouch working is quite a faff, with the fact that you need to use it in conjunction with your PC being particularly crazy. After all, this merely underlines our first thought about this whole PenTouch scheme, namely: Why on earth would we or anyone else want to stand by a TV and use a cumbersome pentouch interface to do interactive stuff when we could just use a laptop or tablet computer instead?

LG’s marketing tries to suggest a ‘family fun’ angle to PenTouch. But this just doesn’t sit right with us at all. Not least because the idea of having a child standing so close to a 50in TV that they can write on it and then actually having them prod a big pen at its screen just doesn’t seem remotely sensible or desirable. 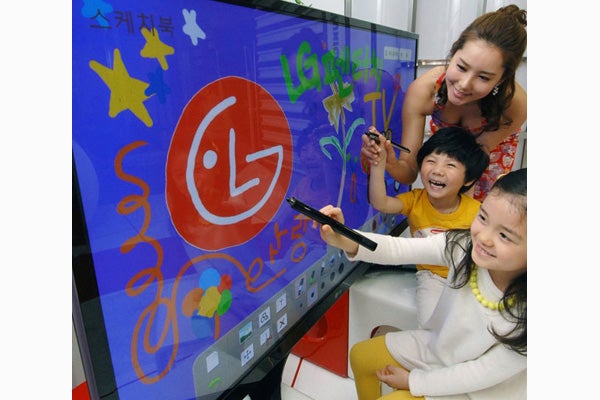 The sort of programs you can use with PenTouch include a Sketchbook, a photo editor, Microsoft Office and PDF files, and a ‘family calendar’. You can also use tablet-like ‘swipe’ motions to navigate through photo collections, and surf the Web. But the point is that you can do all of this in much more convenient and logical ways that don’t involve standing next to your TV. And any attempt by LG to suggest that they’re creating some new focal point for family fun with the PenTouch functionality is so off-beam that it’s almost funny.

But of course, it isn’t funny. Not really. Because ultimately you’re surely having to pay at least some premium for the PenTouch system, and we really don’t see why you should pay for a feature we’re pretty confident you will only use once – if at all.

What makes all this PenTouch madness all the more unfortunate is that it does its best to make you lose sight of the fact that at its heart, the 50PZ850 isn’t really a bad TV at all.

For while its picture talents never – even after careful setup – challenge the best that Panasonic and Samsung plasma TVs have to offer this year, they still have some impressive moments.
This is especially true if you’re watching HD. For the set manages to look quite sharp, detailed, colour-rich and dynamic with any decent-quality HD sources, making the most of the screen’s full HD resolution and healthy 50in size.

The 50PZ850 is also capable of a very likable 3D performance. The main reason for this is that – thankfully – the TV doesn’t suffer anywhere near as badly as LG’s cheaper 3D plasmas with crosstalk ghosting noise. There’s still a bit of it however, and more than you would see with LG’s passive TVs, in fact.

But overall it doesn’t stop the 50PZ850 from producing a very watchable active 3D performance, with decent depth, good sharpness, and acceptable amounts of shadow detail and colour dynamism. Which is quite ironic, really, given LG’s apparent hatred of the active 3D format.

While our overall impressions of the 50PZ850’s picture performance are good, the set does suffer a cluster of flaws. First, although its black level response is strong compared with many LCD TVs, compared with other equivalent plasma sets it’s a little wanting, suffering with slightly more greyness and allowing through less shadow detailing.

Colours, too, although reasonably punchy tend to exhibit a few uncomfortable tones at times. This is especially true when watching standard definition, and there was nothing we could achieve via the colour management system that completely sorted the tonal inaccuracies out. 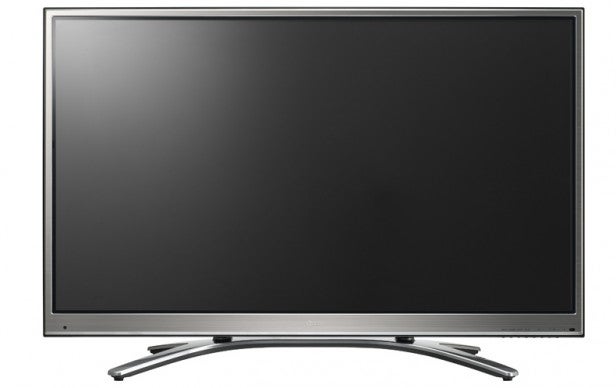 Standard def images tend to look rather soft as well, suggesting the scaling engine in the 50PZ850 isn’t one of LG’s best.

Next to raise concern is the susceptibility of the 50PZ850 to image retention. If you leave a very bright image, such as a rich channel logo, onscreen for too long, you can see a ghostly echo of that feature hanging around over subsequent footage long after it should have disappeared. This was once a common problem with plasma technology, but we don’t see it nearly as often these days.

We didn’t suffer any retention that was in any way permanent during our tests. But we would certainly recommend that anyone who buys the 50PZ850 takes extreme care for at least 100 hours of use to avoid material that might cause image retention.

The last niggle is a measured input lag figure of around 80ms. This is an alarmingly high figure, and will almost certainly negatively effect your gaming performance – especially if you like playing against other ‘real people’ online.

The 50PZ850’s audio, finally, is solid. There’s a strong mid-range performance – perhaps aided by the extreme robustness of the TV’s chassis – that helps voices sound rich and believable, while also supporting at least a degree of soundstage expansion when you shift from normal TV fare into action scenes.

Verdict
Although it’s far from perfect, the 50PZ850 is a credible 3D and HD performer – though it’s not so hot with standard definition 2D. However, it’s still hard to recommend this TV wholeheartedly to 3D and HD fans because of the simple fact that part of its price is used to buy LG’s new PenTouch functionality – a feature which is to our mind the most hare-brained thing we’ve seen added to a TV in many a long year.