Sometimes, it’s easy to forget that Panasonic is not the only brand still making plasma TVs. Samsung and LG both still ship reasonably fulsome plasma ranges too. But unlike Panasonic, the Korean brands focus their marketing attentions almost exclusively on their LCD and especially LED-lit sets.


In our opinion, this is a mistake, for plasma technology still has a great deal to offer – especially, it’s turned out, in the new 3D age. Panasonic and Samsung have both delivered 3D pictures from plasma screens that have been markedly superior – at least in terms of the dreaded crosstalk noise – to anything witnessed from an LCD TV. And now, as we’re about to discover, LG is continuing this theme with its first 3D plasma TV, the 50PX990. 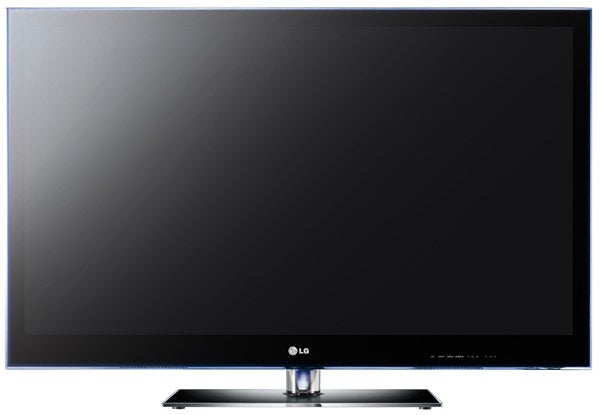 The 50PX990 gets off to an eye-catching start with a very fetching design. It sits right at the top of LG’s plasma tree, and so enjoys LG’s premium Infinia design complete with a glass top-sheet to give the TV a single-layer finish.


The black bezel is strikingly minimalistic and glossy too, as well as being distinguished by a touch of blue in its extremities. This blue extends into the lovely transparent neck of the TV’s exceptionally good-looking desktop stand too, with finishing touches coming from the set’s impressive slenderness for a plasma TV and the tastefully illuminated logo and buttons along the bottom edge.


The 50PX990’s uncompromising status is also evident in its connections. For a healthy four-strong HDMI count is joined by fulsome multimedia support from a D-Sub PC input, an Ethernet port and USB ports. What’s more, the Ethernet port delivers a full suite of functions, from supporting a built-in Freeview HD tuner through to streaming files from a DLNA PC and accessing LG’s NetCast online platform.

The USBs can play back JPEG, MP3 and even DivX HD video files, as well as making the TV Wi-Fi capable via a dongle. A dongle which is included with the TV as standard, rather than only being an optional extra.


Another key ‘accessory’ found in the 50PX990’s box is a single pair of LG’s active shutter 3D glasses. Obviously only getting one pair runs counter to the supposedly more social nature of 3D viewing – and it’s impossible to ignore the fact that some other brands now give you two pairs of 3D glasses with their 3D TVs. But there you go. Guess you’ll just have to factor in £100 for each pair of further glasses you need – something that’s not actually that nightmarish given that we’ve found the 50PX990 going for under a grand.


While we’re on the subject of 3D, it’s high time we pointed out that the 50PX990 is the first 3D TV we’ve seen that’s had its 3D performance officially endorsed by independent quality assurance group, THX. In deciding if a TV hits the mark in 3D terms, the THX labs assess brightness, colour saturations and, most significantly of all, crosstalk noise.

The 50PX990’s endorsements don’t end with THX, either. For it also sports a couple of preset picture slots designed for use by the Imaging Science Foundation – a result of the ISF having been satisfied that the 50PX990 has sufficient calibration tools to be professionally adjusted by one of its engineers.


Among these tools are a pretty full colour management system and a series of gamma controls, all of which can yield definite improvements to the TV’s picture quality.

Other potentially important tools in the 50PX990’s arsenal include ‘600Hz’ sub-field drive technology for reducing judder, and the inclusion within the plasma panel of one of LG’s TruBlack filters. These filters distinguish LG’s flagship plasmas from models one step down the range, and are designed to reduce ambient reflections and boost contrast.


There are two more things to note about the 50PX990 before we start checking out its pictures, one good, one bad. The good thing is how superbly easy to use it is, thanks to a superbly presented and well-organised onscreen menu system. The bad news is that LG’s NetCast online system continues to severely underwhelm, with mere YouTube, Picasa and AccuWeather support. Hopefully LG will deliver on its promises of a much-improved online platform for 2011.


Kicking off our assessment of the 50PK990’s picture quality with those THX-endorsed 3D images, we immediately scanned our 3D sources for evidence of crosstalk noise. And two things become quickly apparent. 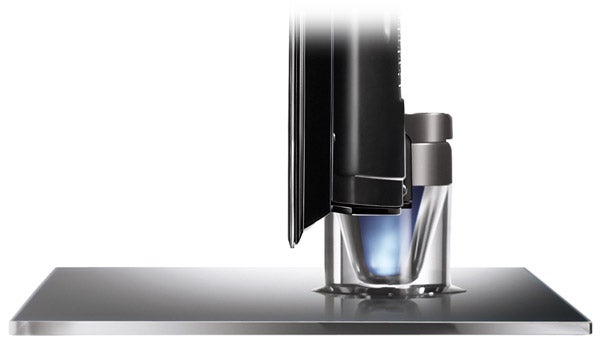 First, the 50PK990 suffers markedly less with crosstalk than any of LG’s other, non-plasma 3D TVs bar the non-HD, passive 3D model, the 47LD950. It also suffers less with crosstalk than LCD TVs from other brands. This immediately makes its 3D images look more credible and more detailed. Even better, it means you can watch 3D for long enough stretches to actually enjoy a 3D film from start to finish without a break/Nurofen. Handy.


However, before you get too carried away, it’s also clear that the 50PX990’s 3D pictures aren’t as completely crosstalk-free as those of Panasonic’s 3D plasma sets – a fact which is enough in itself to justify the higher price of Panasonic’s 3D sets.


The 50PX990 is more of an unqualified success with the brightness and colour of its 3D pictures. In both these respects it actually outperforms the Panasonic 3D class leaders. The extra brightness in the LG’s 3D pictures means, too, that there’s a bit more shadow detail in dark scenes than you get with the Panasonic sets.


The 50PX990’s 3D pictures are similar in terms of crosstalk levels to Samsung’s recently reviewed PS50C6900, but the LG feels slightly richer than that model when it comes to black level response.


It’s now become pretty much de rigueur to include 2D to 3D conversion processing on 3D TVs (unless you’re Philips). Personally we’re not fans of these systems, since no matter how well they work, they’re no match for a true ‘3D from source’ experience. But if you really do fancy watching ”EastEnders” in slightly odd 3D, then the LG converter does as solid a job as most systems.


All in all, while not perfect, the 50PX990’s 3D pictures can be classed as very good indeed for such an affordable 3D set.

Happily its 2D imaging is no slouch, either. The black level advantage over the Samsung PS50C6900 becomes more pronounced with 2D fare, for instance, and leaves dark scenes feel engaging and credible.


We also noted more clearly with 2D just how impeccably sharp and detailed the 50PX990 is when showing HD material – and it achieves this without generating unhealthy amounts of noise or grain.


Motion is clear and reasonably fluid with careful/conservative use of the set’s motion processing tools, too, and colours are extremely fully saturated for a plasma TV.


Actually, at times colours during 2D viewing can look a bit over-wrought, especially where reds and some skin tones are concerned. In fact, we have a sneaky suspicion that the 50PX990’s colours have been calibrated to best suit 3D viewing rather than 2D viewing. But it doesn’t take too much time playing with the various colour management tools to make things much better. 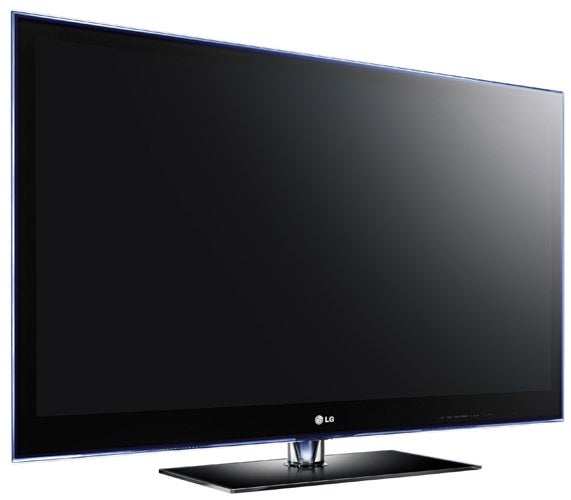 We also need to qualify the set’s black level response, though. For while it certainly plummets deeper blacks than the Samsung PS50C6900, it falls short of Panasonic’s black level prowess, as well as the black level efforts of one or two of the best direct LED TVs.


The 50PX990‘s most aggravating picture flaw, though, is image retention. This once common plasma flaw has been more or less dealt with by other plasma brands, but we’ve found it a problem on all LG plasma TVs we’ve seen this year.


To be fair, the effect – which finds ghostly traces of bright image elements lingering for some moments over subsequent dark footage – isn’t as pronounced on the 50PX990 as it has been on LG plasma sets without the TruBlack filter. And we’d like to think that the retention issue would diminish over time, until eventually it could disappear altogether. But we can’t guarantee this will be the case.


In any case, though, we really don’t see why anyone should have to put up with such a potentially distracting problem even in the short term when other plasma brands have pretty much eliminated it.


The last picture comment to make is that our measurements suggest a little more input lag with the 50PX990 than we would ideally like – around 60ms or so. This could be just enough to fractionally reduce a really competitive gamer’s edge – though to be honest, it had little if any impact on our merely fair to middling ”Call of Duty” skills.


Wrapping up the 50PX990’s performance with its sound, it performs exactly as we would expect a thin modern TV to perform. Which is to say that while it’s not bad with high-pitched sounds and spot effects, and can make voices sound pretty well-rounded for most of the time, it doesn’t have the raw power to avoid sounding compressed when the soundstage gets dense. There’s really not much bass around, either.


The generally very likeable 50PX990 provides yet more proof that the first battle in the 3D war has been won by plasma technology. For while its 3D pictures certainly aren’t completely crosstalk-free, they are much more watchable over a long period of time than those of any LCD TV bar, possibly, Philips’ vastly more expensive PFL9000 series.


The 50PX990 is a generally good 2D performer too, with its only really significant problems being a weak online service and distracting image retention – the latter of which bothered us enough to nudge the set’s overall mark down to an 8 from what would otherwise have been a comfortable 9.