You’ve got to hand it to those Koreans: they sure know a thing or two about TV design. Samsung and LG have both been leading lights in TV aesthetics for a couple of generations now, and if LG’s sumptuous-looking new 50PG6000 plasma TV is anything to go by, their uncanny designer knack is showing no sign of diminishing.


Immediately it catches your eye in just the right way with its reflective black bezel, gracefully curved-back bottom edge and lovely little crescent to the bottom right housing the power light. What’s more, closer inspection reveals the design to be as innovative as it is elegant, for as well as the whole huge screen sitting on a swivelling mount, its front appears entirely ‘frameless’. By which I mean that unlike most TVs, the screen isn’t recessed back from the bezel, but seems to sit pretty much flush with it, with a glass-like finishing ‘cover’ over the lot. 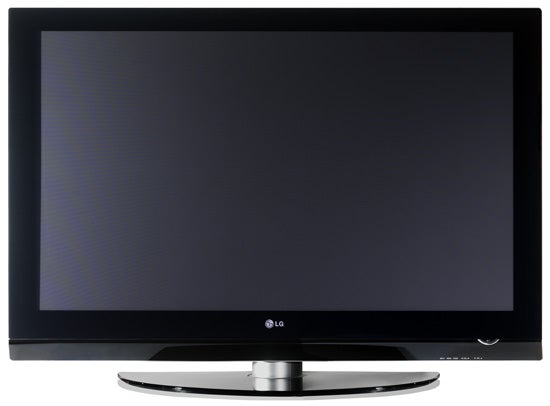 This delightful design element isn’t just for show, either. For it’s actually LG’s alternative solution to its old ‘film filter’ technology, whereby the thick two-level glass panel at the front of most plasma TVs was replaced by a single colour filter to remove plasma’s image ghosting phenomenon (when viewing off-axis) and improve contrast by reducing onscreen reflections. The new design solves the old colour filter problem of the screen being rather weak, and apparently also introduces further brightness and contrast benefits. All in all, it’s not hard to see how the 50PG6000 won an Innovation award at this year’s Consumer Electronics Show in Las Vegas.


Turning our attentions reluctantly away from the 50PG6000’s gorgeous fascia, we find a further treat or two amid its connections – particularly the provision of no less than four HDMI inputs. What’s more, all these HDMIs are built to the latest v1.3 specification, and can take in all video formats including 1080p/24fps. Other highlights include a component video input, an optical digital audio output, a dedicated D-Sub PC port, and even a USB 2.0 port that can accept JPEG and MP3 files.


An investigation of the 50PG6000’s inner specifications uncovers a remarkably high claimed contrast ratio of 30,000:1 (delivered via a combination of the new Frameless Design and improvements to LG’s image processing), a promisingly high brightness level of 1,500cd/m2, and a native resolution of 1,366 x 768.

If you’re feeling disappointed that the 50PG6000’s resolution isn’t full HD, now would seem a pertinent time to remind you that this TV costs less than £1100. For a 50in TV with an award-winning design, oodles of connections, and mostly impressive specifications, this really is one hell of a price. Especially since we’re actually nowhere near done with the 50PG6000’s interesting features yet.


For instance, on the picture processing front you get the latest incarnation of LG’s XD Engine processing, dubbed Dual XD Engine to stress the way it employs two main chipsets – one to work on the input/source and one for the panel itself – both designed in-house by LG to deliver greater harmony than you’d get where a manufacturer has sourced different chipsets from different third parties.


There are one or two interesting tricks to report on the sound front, too. For starters, part of the reason the design looks so striking is the fact that it doesn’t boast any obvious speakers; instead exciters placed in the bezel produce the set’s sound. 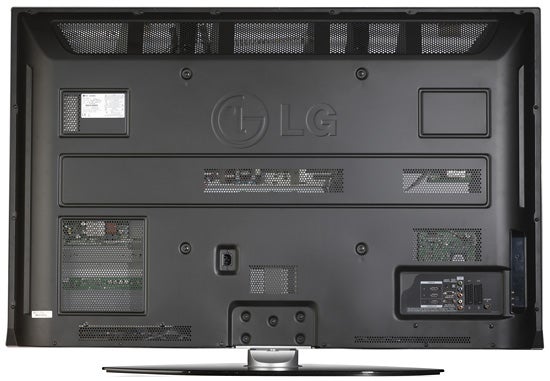 Final more prosaic tricks up the 50PG6000’s sleeve include a Game mode for optimising the screen’s performance with console sources, and an onscreen display for the Freeview Electronic Programme Guide that is now mapped to match the screen’s resolution, making it look far, far crisper and clearer than was the case previously.


Actually, the 50PG6000’s entire operating system is much improved thanks to the introduction of big, bold, exceptionally clean icon-driven onscreen menus that many other manufacturers would do well to imitate.


So far it’s fair to say we’ve seen little if any reason why the 50PG6000 should be anywhere near as cheap as it is. And remarkably this theme continues into its picture performance.


Starting with Sky HD’s impressive broadcast of ”Braveheart”, the 50PG6000’s pictures prove really very good indeed. They look superbly sharp, for instance, showing every blade of grass in ”Braveheart’s” sumptuous Scottish landscapes, and every exquisite texture in King Edward’s regal clothes. Seriously, this is about as sharp as you’re ever going to get without having a full HD resolution.


HD images also benefit from an impressive colour palette, as rich saturations join with easily LG’s most natural plasma skin tones ever. The deep greens of some of the film’s forest backdrops also avoid the slightly ‘radioactive’ look still common on many plasma screens.

Also handled better than with any previous LG plasma is noise, be it general MPEG noise from a source, or technology-related noise such as fizzing over moving objects or grey dotting in dark areas of the picture. The 100Hz processing definitely plays a part in reducing stutter and flickering over motion-packed images, too.


You can cause a bit of grain in HD film images if you leave the TV set to its Sport or Game presets. But provided you use the nicely judged Cinema mode, you’ll get on just fine.


Black levels, meanwhile, are very good, giving dark ”Braveheart” scenes like the sacking of York a real sense of depth and credibility that leaves the vast majority of LCD-based rivals looking flat and grey by comparison. 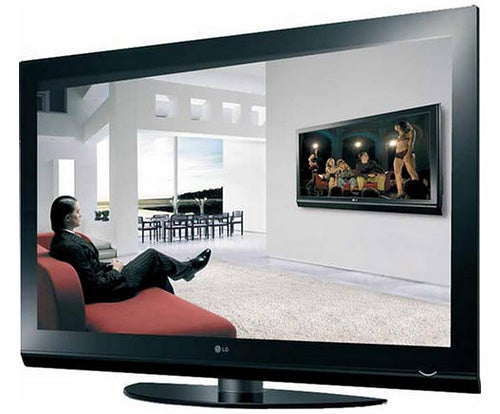 Having just praised the 50PG6000’s black levels, though, I’m duty bound to say that both Panasonic and Pioneer are currently delivering slightly deeper blacks from their plasma screens. Though of course, you’ll have to pay considerably more for a Panasonic or Pioneer 50in plasma than you’re being asked for by the 50PG6000. Another issue with dark scenes is that they can suffer with image retention, where bright parts of a picture can leave a trace of themselves behind for a few seconds. We’d anticipate this issue diminishing over time, though.


The 50PG6000’s standard definition performance isn’t quite as accomplished as those of the best rival flat screens, containing one or two colour tone issues, slightly waxy skin tones at times, and marginally more evidence of MPEG noise than we’d ideally like. That said, standard definition sources are never less than eminently watchable, especially if they’re of a high quality in the first place. And again the performance level has to be considered way better than you’ve any right to expect for the 50PG6000’s money.


As for those invisible speakers, they again outperform expectations. For starters they can churn out some pretty prodigious volumes without, it seems, suffering any distortions of note, or overcrowding of vocals (especially if you call in a Clear Voice feature designed to bring vocals out of a dense mix more clearly).


There’s a pretty decent amount of bass around too, yet not so much that it dominates everything else. In fact, in terms of treble effects the 50PG6000 is again on the money, breathing plenty of life into a good film soundtrack.


The 50PG6000 is far and away LG’s finest flat TV to date, combining a striking and innovative design with some excellent performance standards, bags of features, and above all, a price that’s so reasonable it’s almost silly.