If it was anyone else but us writing this review, you might be forgiven for thinking we’d royally cocked things up with the price at the top of the page. Surely, SURELY it’s not really possible to buy a 50in plasma TV for just £1,280, right? Wrong. The latest round of post-Christmas price-slashing on the high street has seen the already affordable original price tag of £1800 for LG’s 50in 50PC1D tumble right down to under £1300, making it far and away the cheapest 50in flat TV we’ve ever clapped eyes on.


Pity, then, that it doesn’t turn out to be quite the awesome bargain we’d hoped it would be…


There’s certainly nothing remotely cheap, though, about the face the 50PC1D presents to the world. Its high-gloss black bezel offset by a deep silver trim actually creates a more opulent impression than the designs of many way more expensive rivals. 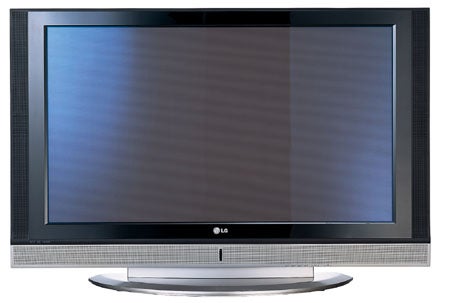 There’s nothing about the 50PC1D’s connections that gives the budget game away, either. Its two HDMI inputs are in line with what most rivals are offering in the digital HD department these days, and they’re backed up by the component jacks demanded by the HD Ready spec list; a D-Sub PC input; a very healthy three Scarts; an RS 232C control/service jack; and even – remarkably for this money – two sockets that reveal the presence of a built-in digital tuner. These are a CI slot for adding subscription TV service cards, and a digital audio output for piping potential Dolby Digital broadcasts to a suitable receiver.


So far, so very good indeed. And the good times continue to roll with the discovery of a really strikingly long features list. We’ve already covered the set’s HD Readiness, digital tuner and PC compatibility. But also in its armoury is its use of LG’s proprietary XD Engine image processing system. This provides improvements for no less than six elements of the picture: colour saturations/tones, sharpness, contrast, brightness, colour gradations, and the handling of motion during action sequences.

The digital tuner is also well supported, thanks to a slickly designed 7-day electronic programme guide from which you can directly set timer recording events just by selecting desired shows from the listings.

Elsewhere you’ll find separate user adjustments for flesh-, green- and blue-tones in the picture; MPEG noise reduction options to smooth away the blocking noise generated by many digital broadcasts and a few low-rent DVDs; a black level booster for making dark picture areas look richer; and picture in picture tools. And still we’ve only really covered the tip of the feature iceberg.


So far it’s nearly impossible to ratify the 50PC1D’s £1,280 price tag with the design prowess, connectivity and features it has to offer. But sadly the one place where the lowly price perhaps does find an expression is in the TV’s picture quality. 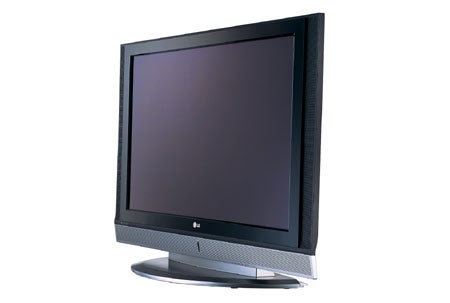 The first things to make a negative impression on us are the TV’s colours. Sure, there’s a rare intensity and vibrancy by plasma standards to the way the set presents such colour-rich fare as Viva Pinata on the Xbox 360 or Superman Returns on HD DVD. But this richness is sadly seemingly only achieved at the expense of colour tones that look far more unnatural – gaudy, even – than we’re remotely comfortable with. Skin tones are particularly hard hit by the 50PC1D’s colour problems, frequently looking almost disturbingly over-ripe and flushed.


To be fair, if you push the set’s colour setting down right to around a third of its maximum setting, some of the problems we’re describing become considerably reduced. But they never completely go away – and with colours desaturated to this extent, the picture also starts to lose its vibrancy and sense of solidity.


Fighting hard to distract your attention away from the colour failings, though, is another howler in the shape of some really pretty excessive video noise. And we’re not just talking about one type of noise either; in fact, the set suffers with MPEG blocking from digital sources (including its own digital tuner); grain (especially with analogue sources); and motion noise in the form of fizzing dots over objects moving horizontally across the screen.

Even if you’re lucky enough to only find one of these noise types occurring at any one time the picture still looks distractingly ‘alive’, so you can imagine how unpleasant things get when all three culprits appear simultaneously.


Tragically, if you put your rose-tinted glasses on and try to see beyond the depressing duo of problems we’ve just reported, the 50PC1D actually has a lot to offer. It’s one of the best black level performers in the flat TV world for instance, effortlessly portraying even the darkest corners of Sam Fisher’s Splinter Cell: Double Agent adventures without a trace of the tell-tale greyness that afflicts so many flat TV rivals – budget priced or otherwise. 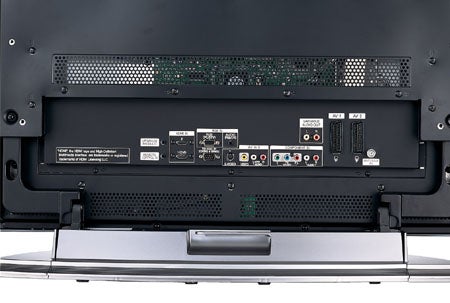 HD pictures also look pretty sharp, as the set does a solid job of picking out the endless fine detail in, say, shots of the New York skyline from the HD DVD of King Kong. And although beset by fizzing noise, motion is at least portrayed smoothly, without judder.


The 50PC1D is a perfectly credible audio performer too, using its sheer size to good effect to produce a soundstage that’s loud, widely dispersed, and fleshed out by at least passable amounts of bass. There’s not sufficient clarity in the treble spectrum or quite enough openness to bass lines to make it a truly classic audio performer, but the sound is certainly potent enough to do the scale of the 50in images justice. And you can’t really ask for much more than that from a 50in TV that costs under £1,300.


We desperately wanted to love the 50PC1D, as with its £1,280 price tag it really does have the potential to revolutionise the UK TV environment, opening the big-screen door to a whole new section of wannabe home cinema fans. But ultimately the flaws with its pictures make it a disappointing case of quantity over quality.