Sorry, but if you’re already feeling at all confused by this new-fangled 3D-on-your-telly business, then we’re about to make things even worse. For what we’ve got in LG’s 47LD950 is a TV that throws the cat among the 3D pigeons in no uncertain terms, by bunting into touch the en vogue active shutter/alternate frame/full HD 3D system in favour of a rather more old fashioned passive/side by side approach.


Why, you might well wonder, would anyone want to do this when it could potentially undermine the whole 3D momentum the TV industry is so desperately trying to get going? Actually, there are more reasons than you might think. 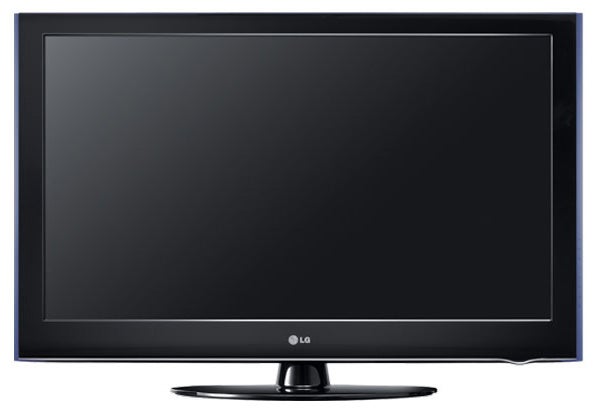 The single biggest one concerns the price of 3D glasses. As you doubtless know by now, the typical asking price for a pair of active shutter 3D glasses is around £100. Which is bad enough if you need just one pair, but for a family of four or more… well, let’s just say it starts to stack up. Passive 3D glasses, on the other hand, are cheap as chips. You can often find them given away with magazines, or you can buy them for a couple of quid at your local cinema. In fact, LG thinks nothing of including four as standard with the 47LD950. It even puts them in nice little storage cases.


There’s another compelling reason to think about the passive 3D approach too, brought about by the aggravating fact that one brand’s active shutter 3D glasses won’t work with another brand’s 3D TV. This means that with current Active 3D technology, if your mates with a Sony 3D TV want to bring their glasses round to yours to watch something in 3D on your Panasonic 3D TV, their glasses won’t work.

With the 47LD950, anyone’s pair of cheap passive glasses will work with the TV. Or you can just get a load of pairs in yourself, and keep them for when you feel like a 3D party.


With this in mind, it’s no surprise that Sky has been putting LG passive TVs – similar to the 47LD950 – into pubs and clubs so that they can show Sky’s new 3D channel, due to launch fully into homes, too, on October 1st.


Also potentially interesting to the 47LD950’s chances of making a 3D splash is the fact that its passive approach to 3D arguably fits rather nicely with Sky’s 3D broadcast system, which itself employs a side by side approach. Hopefully the TV will produce some particularly good quality with Sky 3D sources.


If you’re paying attention, though, you may have figured out the single biggest flaw with LG’s cunning plan: the 47LD950 will not give you full HD 3D. This is because it has to put both the left and right fields of a 3D image on screen at once, sharing out those valuable pixels, rather than alternately presenting a full HD frame to each eye.

Given the potential extent of this compromise in today’s HD-obsessed age, the 47LD950’s £2k price perhaps looks a little high too. But then you do have to set against this the fact that you’re not spending extra on 3D glasses, and the fact that actually, making the necessary screen technology to deliver a passive 3D picture isn’t as straightforward or affordable as you might think. 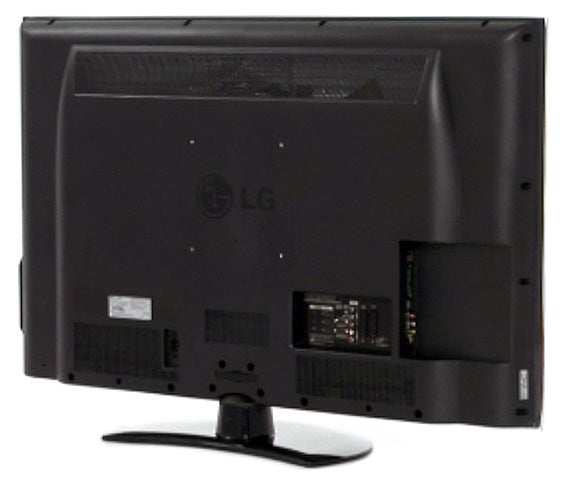 Looking beyond the 47LD950’s 3D intrigues, we’re slightly disappointed for two grand to find that it uses just standard CCFL backlighting rather than some form of LED. Another surprising disappointment is that there’s no Freeview HD tuner – just a standard definition Freeview one. Plus there’s no LAN jack, which in turn means no DLNA PC compatibility, and no means of accessing the LG NetCast online service available through all of LG’s other, similarly priced TVs.


The set is thankfully not a total multimedia numpty, though. In fact, it can play DivX HD video, JPEG photos and MP3 audio files direct from USB storage devices should you wish it too. 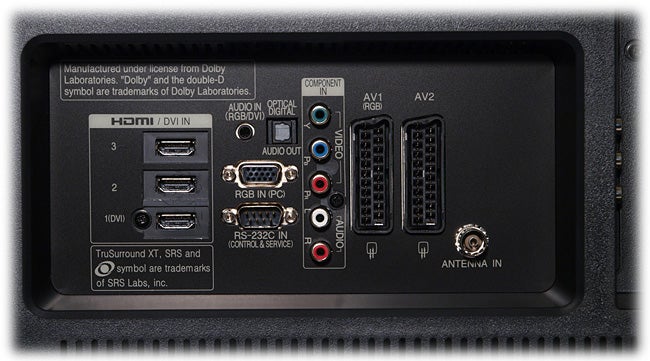 The 47LD950 also benefits from a 200Hz engine (or a scanning backlight plus 100Hz, to be more precise!), and it’s good to see the set adopting the same inspired, near foolproof onscreen menu system found elsewhere in LG’s range.


Even better, the 47LD950 comes with the support of the Imaging Science Foundation (ISF). This means it has enough calibration tools – colour management, processing adjustments, brightness and contrast controls – to be professionally calibrated by a trained ISF engineer should you wish to invest extra money to ensure you’re getting the very best out your 47LD950.


As hoped, the 47LD950’s passive approach really does chime rather nicely with Sky’s 3D broadcast. For the first time with any 3D TV to date, in fact, we were troubled by practically no crosstalk noise at all when watching Sky, a fact that is enough in itself to make Sky’s broadcasts immediately look more engaging, immersive and crisp than usual. Especially as the lack of any shuttering in the LG’s glasses helps its 3D pictures look impressively bright, colourful and stable. 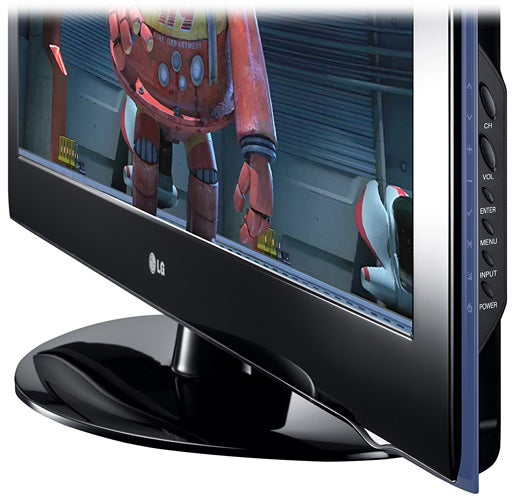 
Basically, it just doesn’t work, for two pretty serious reasons. First and worst, the passive system – at least as employed by the 47LD950 – seems to lose something substantial in depth terms during the translation from alternating 1,920 x 1,080 frames to the lower resolution side-by-side passive approach. This problem presents itself as an out-of-focus look to background material while foreground objects look OK – a discrepancy that quickly finds our eyes becoming tired as they keep trying to correct a problem that actually can’t be corrected.

Figuring the problem might be resolved by switching the set’s Left/Right 3D setting to right/left, all we succeeded in doing was making the foreground go out of focus while the background suddenly became sharp!


This is all extremely frustrating, and makes 3D Blu-rays look a shadow of what we know they should look like. Even though again, 3D Blu-rays on the 47LD950 are actually impressively free of crosstalk noise.


To make matters worse, the 47LD950’s screen is comfortably big enough to reveal a marked reduction in 3D Blu-ray picture resolution versus all the active shutter, full HD 3D TVs out there. 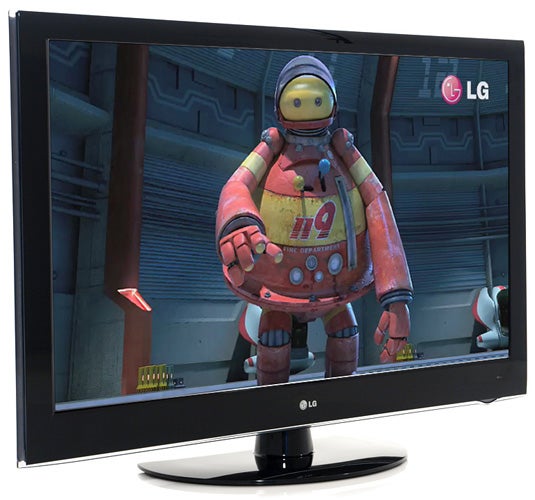 This sense of missing detail and crispness with 3D Blu-rays is ironically emphasised by the actually quite high quality of the 47LD950’s 2D HD performance. For with normal Blu-rays, the 47LD950’s pictures look full of texture and sharpness, giving us all those HD flourishes and subtleties we so love to see on a big-screen full HD TV.


Normal HD sources also look dynamically but naturally coloured, and give us a better chance to appreciate the 47LD950’s respectable motion handling (so long as you don’t set the motion processing too high).


However, with no 3D glasses to affect our judgement, 2D HD footage also lets us see that the 47LD950 suffers with a little of the clouding over dark picture areas so often witnessed with CCFL LCD TVs.


More problems come into play with standard def material. For thanks to what we suspect must be shortcomings in the TV’s processing routines, standard def pictures tend to appear a touch mushy, and too little is done to suppress any noise that might be inherent in standard def sources, especially digital tuner ones.


Stubbornly refusing to let us finish on a high note, meanwhile, is the 47LD950’s audio performance. It’s not actually bad or anything; just resolutely average, displaying exactly the same reluctance to attempt anything approximating a convincing bass line that we’ve witnessed on countless other LCD TVs before.


Some underwhelming standard definition pictures join with the lack of Freeview HD playback, missing Ethernet-related features, CCFL lighting and arguably even the passive approach to 3D in making the 47LD950 feel curiously dated for what is ostensibly an innovative TV.


There seems little doubt that LG’s passive 3D approach will continue to do healthy business in the commercial sector, where active shutter glasses just aren’t practical. But if it’s going to make a similar impact in our living rooms, it’s really going to have to do better with 3D Blu-rays next time out.