Sometimes I come across features in the AV world that I love to bits, but which for some reason or other don’t seem to catch on with you, the Great British public. One such feature is the idea of digital hard disc recorders built into TVs.


When I saw the LG 42LT75 last December, the first TV with built-in Freeview Playback (the name given to Freeview-certified HDD recording systems), I really thought it was going to just be the first in a long line of hit TVs carrying the same functionality. But apparently the LT75 models didn’t sell as well as expected, and since last December only Humax and, very recently, JVC have dared to dip their toes into the same TV PVR waters. 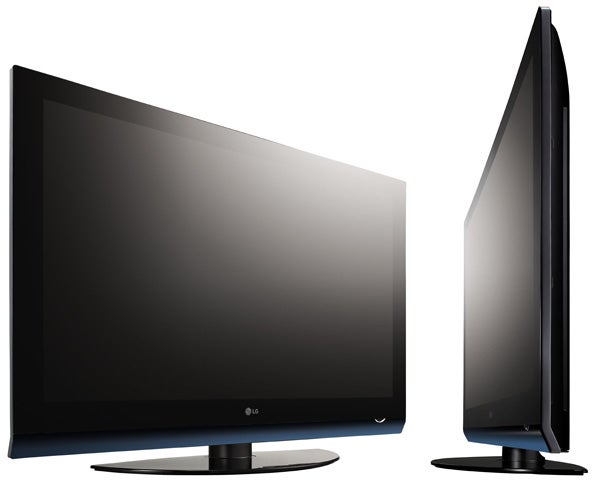 I for one, though, am pleased to say that LG hasn’t given up on its Freeview Playback – now known as Freeview+ – TVs just yet. For in our test room today sits the 42PG6900: a new LG 42in TV with Freeview+ recording. What’s more, just to add a little extra spice to proceedings, the 42PG6900 uses plasma technology rather than the LCD technology used by the other Freeview recording TVs we’ve seen so far. So it could open up Freeview+ TV functionality to a whole new audience of AV fan who prefer plasma to LCD.


The 42PG6900 could also open up TV/PVR combi functionality to a new style-centric audience. For it’s a typically stylish effort from LG, combining a lovely ‘one-level’ front panel and a neatly minimalistic, angular, high-gloss immediate bezel with an elegant understrip that boasts a subtle shade of blue. Yes, blue. 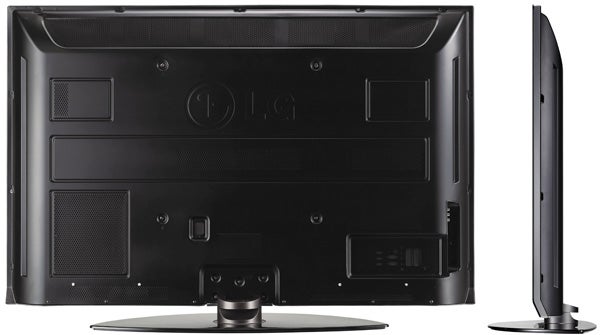 Dragging my attention from its attractive fascia to the 42PG6900’s rear with a little help from its rotating stand, I find a solid rather than impressive set of connections. Highlights include three v1.3 HDMI jacks, a component video input, a D-Sub PC port, and a digital audio output. It’s a slight shame there’s no multimedia input such as a USB port or SD card slot, but then given how cheap the 42PG6900 is considering its size and functionality level, I’m happy to let its lack of multimedia interest slide.


For similar reasons I guess I can see my way to not missing a fourth HDMI too much, especially as the built-in PVR capabilities remove the need for one of the most common HDMI-based external sources.


The 42PG6900’s inner specification, though, has one or two potential weaknesses that might prove harder to forgive. For instance, its claimed contrast ratio is ‘only’ 30,000:1 – miles short of the million to one-type figures now being quoted for plasma TVs by Samsung, Pioneer and Panasonic.


Let’s not forget, though, that manufacturers’ claimed contrast ratios always need to be taken with a pinch of salt, so it would be inappropriate to place too much weight on such figures until we’ve got some eye-witness evidence to back them up.

Rather less open to ‘interpretation’ is the 42PG6900’s rather low resolution. Most 42in TVs these days have a Full HD pixel count, but the 42PG6900’s screen is built from only 1024×768 pixels – enough to earn it an HD Ready badge, but not enough to enable it to render the UK’s 1920×1080 HD sources without having to rescale them downwards.


Here again, though, the 42PG6900 perhaps has an excuse – or two! – for its relatively low resolution. For starters, it is of course quite difficult to cram 1920×1080 plasma cells into a 42in plasma screen. But even more relevantly, you can argue that the 42PG6900’s Freeview+ functionality makes it more oriented towards standard than high definition content. And we’ve commonly found that HD Ready TVs do a better job of upscaling standard definition sources than Full HD ones.


Another specification of interest is the 42PG6900’s 160GB built-in hard disk drive. This is the same size as that found in the LT75 sets, when perhaps we might have hoped for a small increase. But when you consider that 160GB is still enough to store around 50-60 hours of Freeview recordings, again you’ll probably agree that it’s actually enough.

Now we’ve started talking about the 42PG6900’s recordings, it’s worth touching on what makes the set a ‘Freeview+’ machine rather than just a TV with built-in hard disk recording. As we noted in our recent review of the JVC LT-32DE9, there are seven key features a recorder must carry, which go like this:

The 42PG6900 offers all of these things along with another little trick we strongly approve of: totally digital Freeview recordings. By which I mean that when recording Freeview channels, the TV just records the direct digital broadcast channel stream, so there should be no loss of picture quality between recordings and original broadcasts.


The 42PG6900 also lets you record analogue broadcasts (or analogue external inputs with no copy protection) if you wish, and in this case you can actually choose between two recording qualities: High, which again will hopefully show very little degradation, and Normal, which will use up less HDD space but will result in recorded pictures that will presumably look quite a bit worse than the original broadcasts.

So far, although it’s sailed close to the wind a couple of times, I haven’t been able to dig up any really damning dirt on the 42PG6900, raising hopes that it’s going to impress me at least as much as – if not more than – LG’s first Freeview+ TVs. But unfortunately it loses its way slightly at the picture quality hurdle.


There are a number of reasons I found myself feeling a tad non-plussed by the 42PG6900’s image quality, starting with its colour tone. For while its pictures are actually very bright and vibrant by normal plasma standards, the colours on show are tonally very hit and miss, with regular occurrences of unnaturally over-wrought skin tones, slightly dingy looking greens, over-aggressive reds, and tinges of green undertone during dark scenes. Colours also suffer a little with a once-common plasma flaw of visible colour stripes where there should be smooth blends.


Dark scenes, meanwhile, reveal a pretty severe price to pay for the image’s strong colour brightness in the form of obvious image retention. By this I mean that if a bright image element such as a channel logo or racing game car dial has been in the same position on the screen for any length of time and you then cut to a predominantly dark scene, you can clearly make out a ghostly ‘shadow’ of the earlier bright image element that can hang around for a surprisingly long time. 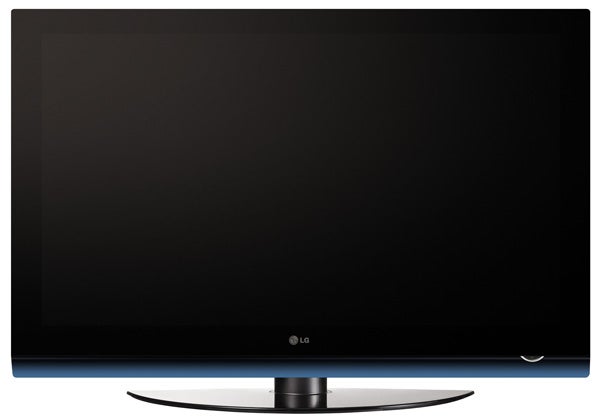 I haven’t seen any evidence to suggest that the TV is susceptible to permanent ‘screen burn’ in the same way older plasmas used to be, and the retention problem should diminish after 100 hours or so of use. But it was certainly an occasionally distracting flaw during our tests, and one that other plasma makers seem to have more or less abolished now.


Another problem is that the 42PG6900’s standard definition pictures aren’t too hot. I noted a distinct improvement in LG’s handling of standard definition with the LT75 range, but here I couldn’t help but notice how plasticky and unnaturally smooth people’s skin tends to look, and how horizontal motion can sometimes result in slight dotting noise – something which again used to be common on plasma screens but which really ought not to be kicking around today.


Standard definition sources do at least look passably sharp and video noise is well controlled, especially with Freeview channels. But somehow I just wasn’t quite as taken with standard def in this plasma incarnation as I was with the earlier LCD incarnation.


Turning to things the 42PG6900 does right, its HD pictures are surprisingly sharp and detailed considering the set is not a Full HD model. There’s perhaps a touch more noise in them than you might see with the very best Full HD models, but there’s never any doubt that you’re watching HD images.

Pictures are very dynamic too, at least during HD viewing, as striking bright peak whites meet decent black levels. Admittedly black levels aren’t as deep as those witnessed on a number of other recent plasma TVs, with some slight greyness to be seen over the darkest areas. But the compensation for this from the way the peak whites come on so strongly is considerable.


A prime example of what I’m talking about can be seen in the early scenes of ”Batman Begins” on Blu-ray, as a sunlit Christian Bale in a cell in Ra’s Al Ghul’s castle stands out with almost glowing – but not unnatural – intensity against the darkness of his prison walls.


The 42PG6900’s very dynamic approach to HD also helps it deliver a really nice image with HD console games – especially as the TV additionally appears to enjoy an extremely low response time that ensures the screen reacts in timely fashion to your joystick antics. This very fast response time means the 42PG6900 produces motion without any of the blurring or smearing commonly witness with TVs using rival LCD technology, while onboard 100Hz processing additionally helps motion look stable and flicker-free.


I still detected slight signs of judder with horizontal movement, especially when watching 1080p/24 sources. But this judder is in my opinion acceptable given the 42PG6900’s price. 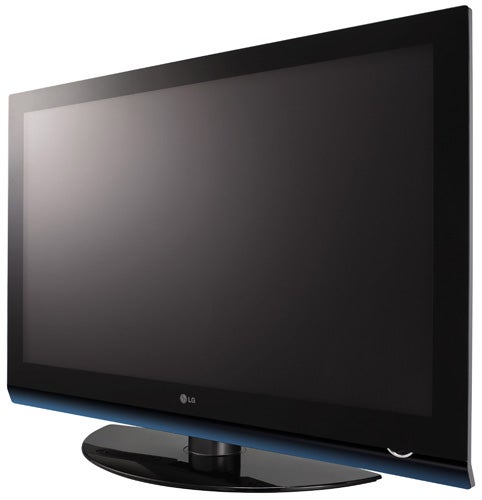 Turning to the 42PG6900’s recordings, the bottom line is that the situation appears to be very similar indeed to that seen with the LT75 models. This means that, sadly, you can still only record one programme at once. But it also means that, as we hoped, recordings of Freeview channels appear indistinguishable from the original broadcasts. Yeehah.


Analogue recordings made using the High picture quality setting, meanwhile, show a slight increase in grain and fuzzing versus original broadcasts, and the image is softer. But I’d still rate them as good. The Normal analogue recording mode is best avoided if you can manage it, as it produces a considerable increase in softness, artefacting and motion blur. That said, it’s still easily watchable if you really need to conserve space.


It’s worth adding here that although the operating system LG employs to deliver all of its Freeview+ functionality is seemingly no different to what we saw on the LT75 range, it’s still really well designed, enabling even a techno numpty to learn the recording/playback ropes in next to no time.


Sonically the 42PG6900 is a chip off the old LG block, using an ‘invisible’ speaker system that fires out sound from all four of the TV’s sides and has been tuned by audio guru Mark Levinson. And as usual the result is a well-rounded, reasonably powerful and clean soundstage, albeit one lacking in the sort of grandiose dynamics that the very best audio performers deliver.


As with the LT75 models, aside from the fact you can only record one channel at a time, I found myself really impressed with the 42PG6900’s Freeview+ implementation and still feel that the concept really deserves to find an audience. The 42PG6900 is also very cheap considering what’s on offer and its pictures – or at least its HD ones – look very nice on a casual first appraisal. However, closer scrutiny ultimately reveals the 42PG6900’s core picture performance to be some way short of the best the plasma world has to offer.