Even by LG’s usually pretty affordable standards, the 42PC1D plasma TV looks like a heck of a bargain on paper. Coming in at around £812 including VAT and delivery, it’s one of the cheapest 42in TVs on the market. Which is, of course, great so far as it goes. But then how often have we found with TVs that you only get what you pay for?


Luckily there’s no sign of the 42PC1D living down to that ‘getting what you pay for’ tag with its aesthetics. In fact, with its glossy black bezel offset prettily by a silvery speaker section and its sleek minimalist lines, it looks really quite opulent. 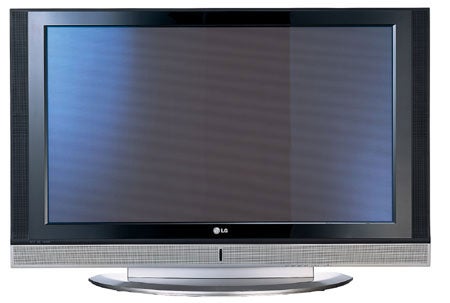 The good first impressions continue with the discovery that the set sports two HDMI inputs – double what we’d usually expect for this sort of money. These are backed up by a component video input for analogue high definition and progressive scan duties; three Scarts; a 15-pin PC connector; and, again impressively for the price, a digital audio output and a CI slot to support what must be a built-in digital tuner. The digital audio output can be used to ship to an AV receiver any Dolby Digital 5.1 soundtracks Freeview may eventually broadcast, while the CI slot lets you add subscription cards for pay TV services.


The HDMI and component connectivity joins forces with an HD native resolution of 1,024 x 768 to earn the 42PC1D its all-important HD Ready badge of honour. The seemingly ‘4:3’ pixel count, incidentally, is made widescreen by the fact that the pixels have been elongated horizontally – an act which we’re told permits greater flexibility in the phosphor colour balance for each pixel and so helps avoid the plasma tendency for greens to over-dominate. So now you know.


So far we’ve seen precious little to explain the lowness of the asking price, and this happy trait continues as we look deeper into the 42PC1D’s features. Particularly unexpected is the appearance of LG’s Clear Filter technology. This rather clever new screen design does away with plasma’s traditional ‘two-layer’ glass screen, resulting in the removal of the secondary offset ‘ghost’ image you can sometimes see if you watch a standard plasma TV from the side.

The set also enjoys LG’s XD Engine image processing system which, as with most such systems on rival brands, tackles a variety of picture issues such as colour response and fine detailing to make the overall picture look better. The effects of XD Engine on contrast seem particularly spectacular, as the set claims a terrifically high contrast ratio of 10000:1 – the same sort of figure boasted by Panasonic’s superb latest plasmas.


We’re not done with the interesting features yet, either. For the attractive onscreen menus contain the sort of bits and bobs we’d scarcely expect to find on a screen costing twice as much, such as individual adjustments for the skin tones, blue tones and green tones; picture in picture facilities; a ‘normal’ noise reduction routine; and MPEG noise reduction for smoothing out any blockiness or shimmering present in some digital broadcasts.


Talking of digital broadcasts, we can also report that the set provides a decently presented 7-day electronic programme guide (EPG), complete with the facility to set timer events just by selecting programmes from the EPG listings. 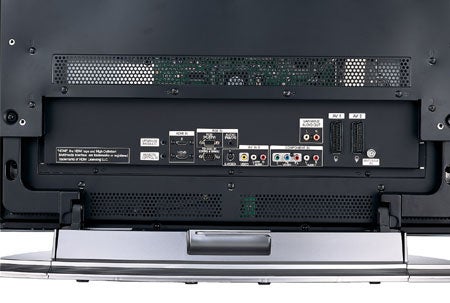 Surely the 42PC1D’s price has to make its presence felt with the set’s picture performance, right? Not really. For while its pictures are certainly not going to win any awards or anything, they’re comfortably better than those of practically any other member of the sub-£1k 42in club.


Starting with the good stuff, the 42PC1D’s colours are really very impressive; vibrant but not overly aggressive, rich but not unnaturally toned, subtly textured but seldom prone to video noise. Excellent.


It does no harm to the 42PC1D’s colour prowess that its black level handling is also superb. As ever you have to take the 10000:1 contrast ratio claim with a hefty pinch of salt, but there’s no denying the lack of tell-tale ‘low contrast greyness’ over dark areas during murky movies like Alien. On this LG, when something’s supposed to look black, then it pretty much looks black.

A knock-on effect of this is that it gives dark and bright scenes alike a greater sense of depth, helping HD movies look genuinely cinematic for much of the time, and drawing you more successfully into the world you’re watching.


Given how many LCD TVs we’re getting through our doors these days, it’s worth adding as a final positive comment that the 42PC1D handles motion extremely well, with none of the smearing common with LCD technology, and precious little of the fizzing noise still seen at times with plasma technology.

On the downside, the 42PC1D’s pictures are rather prone to noise. For instance, any MPEG noise in a standard definition digital feed – Sky or Freeview – tends to look rather exaggerated, despite the best efforts of the MPEG noise reduction and XD Engine processing. General grain is also quite apparent, even during HD viewing, and overall the picture just isn’t quite as sharp as we’d like – and again this applies to HD as well as standard def.


Sonically the 42PC1D is more consistent, having enough power, frequency range and sheer quality to rise quite comfortably to the challenge of a good action film sequence. A slight shortfall in the bass department stops the set reaching the heady audio heights of the finest-sounding TVs we’ve heard, but it’s better than you’ve any right to expect for the price.


If you’ve managed to squirrel away £1,000 for your next TV, you were probably thinking the best you’d be able to get with it would be a decent 32in LCD TV. Happily, LG has other ideas. For while most previous sub-£1k 42in TVs the market has seen have been more or less pants, LG’s 42PC1D looks great, performs decently, and offers features and connections galore. Looks like those lovely Koreans have rewritten the TV pricing rule book again…