It’s increasingly starting to look as if the battle for TV sales in 2008 is going to be fought around design. We’ve got ultra slim TVs, TVs with a hint of colour, TVs with practically non-existent bezels, TVs with see-through panels… Really, it seems as if anything goes – so long as it’s not the usual simple black rectangle.


But even by the standards of today’s ‘stylemeisters’ LG’s new 42LG6000 is a bit special – not least because its entire rear panel is adorned unapologetically in a bright, rich, uncompromising red. Or rather, ‘Scarlet’.


Of course, you might argue that having a red butt is pretty pointless when TVs are made to be watched from the front. But the reality is that many flat TVs in the UK have at least a portion of their sides and rears visible from at least some of the viewing positions in the room. And, in any case, LG thoughtfully places the 42LG6000 on a swiveling stand so that you can leave the TV artfully angled whenever you’ve got guests coming round so that they can glimpse the bold red flourish in all its glory. 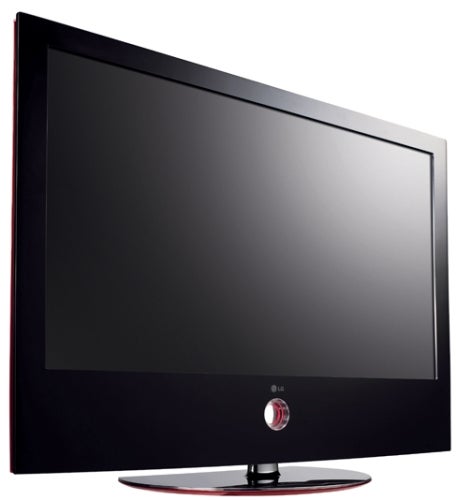 Not that a scarlet behind is the only thing that makes the 42LG6000 stand out, mind you. For its rear is also remarkable for how little it sticks out; just 80mm at its deepest point, making it a good 2cm slimmer than most 40-42in rivals.


This might not sound a lot, but it really does enhance the TV’s aesthetic appeal to a surprising extent. As does the hole cut through the middle of the TV’s bezel. Right underneath the LG logo the Korean brand has seen fit to put a really quite large transparent circular panel that lets you see right through to the back of the TV. What’s more, the entire circle is illuminated – in a subtle grey when you’re watching the TV, or, of course, scarlet when the TV is in standby.


To make room for this extraordinary – but certainly not unattractive – feature, the 42LG6000 has had to incorporate yet another: a bezel that stretches down an unusual distance below the screen, dramatically shunning the trend towards ever-more-slender bezels. Thanks to the rather gorgeous sheer, polished finish of this extended undercarriage, though, it’s definitely yet one more element that enhances the 42LG6000’s attractiveness rather than detracting from it.


Unbelievably we’re STILL not done talking about the 42LG6000’s design yet, either. For no matter how long and hard you stare at the front of the 42LG6000, there’s one thing you’ll never see: visible speakers. This is because LG has designed the set so that the sleek bezel works as a speaker, with numerous driver units embedded in strategic spots underneath and around the screen frame.


From everything we’ve seen so far, it’s no great surprise that the LG Scarlet sets won an ‘Innovations’ award at this year’s Consumer Electronics Show in Las Vegas.

Turning to more prosaic matters at last, the 42LG6000 continues to put a smile on our face by carrying four HDMIs when most rivals are still only offering three. What’s more, these HDMIs offer v1.3 specification with Deep Color compatibility. Connections on offer also include a D-SUB (VGA) PC jack and a USB 2.0 jack, via which you can play JPEG stills or MP3 audio files into the 42LG6000.


In terms of features, aside from its Scarlet design, probably the single most significant thing is its ‘TruMotion 100Hz’ picture processing system. Especially as this 100Hz system isn’t just a simple matter of doubling the PAL refresh rate. For rather than merely repeating the same frame twice, TruMotion actually calculates completely new extra frames that ‘fill in the image gaps’ between the ‘real’ frames to either side.


Another feature of the 42LG6000 LG seems keen to make a song and dance about is its Intelligent Sensor. This can constantly assess the brightness and, apparently, the colour temperature of the area surrounding the TV and adjust no less than five picture settings (brightness, contrast, colour, sharpness and white balance) accordingly. As well as claiming to protect you from eye strain, this feature can also apparently reduce the TV’s power consumption by as much as 62%. 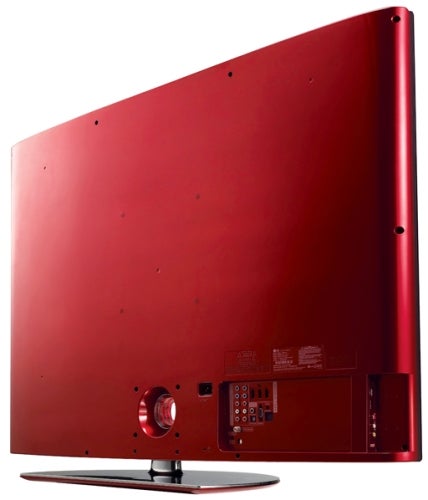 Turning next to a couple of key specifications of the 42LG6000, we find a Full HD resolution and a jaw-droppingly huge claimed contrast ratio of 50,000:1. Inevitably this figure depends on a dynamic backlight system that reduces the image’s brightness during dark scenes to boost black levels – but then such systems are found on practically every other LCD TV too, and precious few if any of them reckon to deliver 50,000:1. At which point we should probably pause to reflect that the contrast ratios quoted by manufacturers are notoriously unreliable…


Moving swiftly on, a quick poke around in the 42LG6000’s onscreen menus uncovers a series of different thematic picture presets including a Game Mode. This goes further than most by not only tweaking the TV’s processing to reduce image lag, but also boosting black levels and enhancing sharpness in response to the fact that gamers often sit nearer the screen than normal viewers. In fact, the 42LG6000’s Game Mode even tweaks the TV’s sound as well, to make it more dynamic and immersive.


Other bits and bobs of note include the latest version of LG’s usually solid if slightly uninspiring XD Engine system (designed to improve colours, black levels, sharpness and motion); an ‘eye care’ feature that can limit the screen’s brightness so that it doesn’t damage your eyes; and a Clear Voice mode that emphasizes dialogue if you’re find it sounding lost in the audio mix.

And now, at long last, it’s time to find out if the LG’s 42in Scarlet TV’s beauty is more than skin deep.


And, actually you know, it just about is. For starters, as I’d hoped the addition of 100Hz processing certainly does boost the screen’s handling of motion. The really quite serious resolution loss over motion seen recently on LG’s 5000 models is hugely reduced. In fact, with the TruMotion system set to high, it almost disappears completely. What’s more, as well as looking sharper, moving objects also progress across the screen more fluidly – an especially noticeable effect when you’re watching films.

Also good on the 42LG6000 is its black level response. Most ‘normal’ kinds of image enjoy dark sections that look really punchy and deep, and provide a great counterpoint to the images’ bright and colourful bits. Liberty City’s stunning lighting variations in the Xbox 360’s Grand Theft Auto IV frequently look dazzling as a result. Also, the startling contrasts between the deliberately grey palette and vivid reds of all Todd’s copious bloodletting in the recently released Blu-ray transfer of Tim Burton’s Sweeney Todd, couldn’t be more dramatic.


Obviously good black levels are only half of this image dynamism story, though. For in typical LG style the 42LG6000 pumps out seriously vibrant colour tones right across the spectrum. However, unlike some previous LG LCDs, here that taste for vibrancy doesn’t lead to colour tones looking forced or unnatural. In fact the skin tones on display during the Champions League Final in HD looked authentic enough to see how much paler John Terry looked after he missed that penalty…


A final strength of the 42LG6000 is that it does a really sound job of upscaling standard definition sources to its full HD native resolution, with far less of the off-key colour tones and exaggerated video noise that has characterised a few previous LG LCDs.

While good, though, the 42LG6000’s pictures aren’t quite great. For instance, while black levels are good, they’re not quite as good as those of Samsung’s new 656 models, or the Sony Bravia 40W4000, with gentle traces of the common LCD greyness problem over the very darkest corners. Some of the blackest backdrops in Sweeney Todd also look a bit hollow as the TV fails to reveal the sort of subtle shadow detailing that’s essential in giving dark scenes a sense of natural depth.


My other main concern is with the TV’s TruMotion engine. For while this delivers generally positive results, it’s also more ‘glitchy’ than similar engines we’ve seen from one or two other brands recently.


For instance, with the system in operation during our Sweeney Todd run-through, if any of the actors cross the screen or move part of their bodies particularly quickly, the processing struggles to keep up and causes a flickery lagging artefact over the area of the picture that’s moving. While watching the Champion’s League Final, meanwhile, I noted a few occasions where the ball would develop a couple of ghostly echoes of itself as it traveled through the air from goal kicks or big clearances. 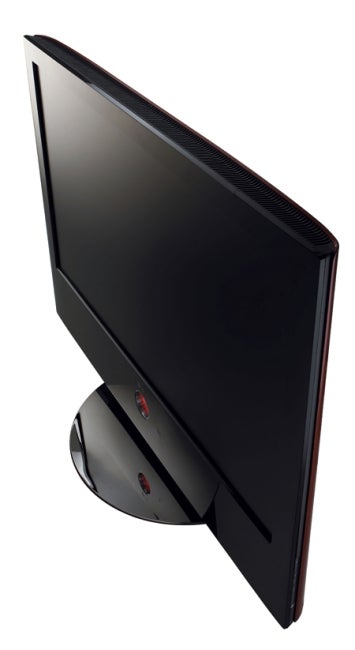 Finally, during camera pans the backdrop sometimes flickers a touch, again presumably as the processing struggles to keep up with its calculations. LG has provided the option to turn the TruMotion system off, of course, and if you do this the various glitches disappear. But then motion doesn’t look as clear or fluid.


As a final lesser niggle, I have to say I didn’t find the 42LG6000’s HD pictures to look quite as sharp as I’d like. Not to the extent that you don’t realise you’re watching HD; but the HD efforts of the recently tested Sony Bravia 40W4000 definitely look quite a bit crisper.


Turning finally to the 42LG6000’s invisible speaker system, it has good points and bad points. On the upside, it delivers some surprising amounts of treble detailing, good volume levels, and plenty of soundstage width. On the downside, the mid and lower end of the audio register can become congested, leading to a slightly muddy feeling to loud scenes, and even the occasional distortion.


The 42LG6000 is a really quite beautifully designed and constructed TV that will doubtless win many admirers on its looks alone. Just as well, then, that people seduced by its design will also find it a good – though not quite great – performer, too.