I know what you’re thinking: we made a mistake in our headline. After all, we said that the 32PG6000 is a plasma TV when everybody knows that plasma TVs don’t come smaller than 37in these days.


But actually, we’re not wrong at all. For in a striking move that frankly none of us saw coming, LG has decided to fly in the face of established ‘wisdom’ by expanding its plasma TV range to include a 32in model. The question is, is this decision completely bonkers or totally inspired?!


Aside from the fact that it’s pretty heavy compared with most 32in flat TVs we see these days, there’s nothing particularly obvious about the 32PG6000’s exterior that provides proof of its plasma heart. It just appears to be another attractive glossy black rectangle given added panache by a neat half moon power light in the bottom right corner. 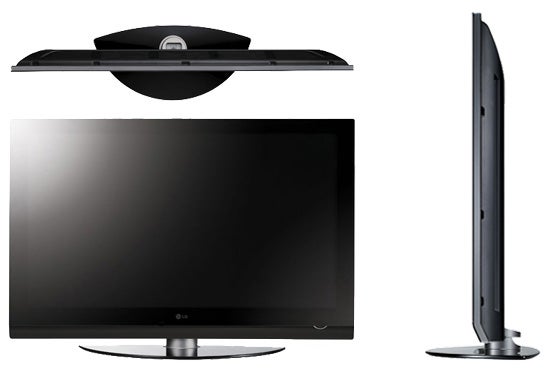 However, look a little closer and you’ll notice that the TV’s front comprises a single-layer, rather than a bezel that stands proud from the screen as you’d normally see. This distinctive – and very attractive – design trait is familiar from the 42in 42PG6000 and 50in 50PG6000 LG models we’ve tested previously, so here, I guess, lies at least a small exterior hint of the set’s plasma rather than LCD core.


Connectivity is excellent for such a small and, at just £452, extremely affordable 32in TV. The provision of four HDMIs – all built to the v1.3 standard – where even many premium TVs only give you three is particularly welcome, as is a USB 2.0 port able to play JPEG and MP3 files. There’s a D-Sub port for PC connection too, so you can double the TV up as a computer monitor – a feature one or two other budget models skip in their cost-cutting exploits.

Given plasma technology’s well-documented problems with making its cells small enough to fit 1920×1080 of them into even a 42in screen, it should come as little surprise that the 32PG6000 does not feature a Full HD resolution. Rather it carries an HD Ready pixel count of 1024×768. But we don’t see this as a massive problem, particularly if the 32PG6000 counters its slight loss of resolution versus some of today’s 32in LCD models by delivering such traditional plasma strengths as deep black levels and crisper motion handling.


Regarding black levels, the 32PG6000’s quoted contrast ratio of 30,000:1 looks very promising – especially since this is a ‘native’ figure not dependent on the vagaries of dynamic backlight systems like those employed by the vast majority of LCD TVs.

More good news, especially with the 32PG6000’s price in mind, is the flexibility of its set up. In fact, its options are so numerous that the TV can even be professionally calibrated by an Imaging Science Foundation (ISF) expert to precisely suit your home’s specific viewing conditions.


If you’d rather set things up yourself, I’ll quickly mention the key options at your disposal. Namely a ‘Fresh’ Contrast booster, a Fresh colour booster, multi-level noise reduction, multi-level gamma adjustments and, if you choose one of the provided ‘Expert’ modes, a black level booster, and individual tweakage of the red, green and blue contrast and brightness levels, and red, green, blue, cyan, yellow and magenta colour and tint levels. Impressive stuff. 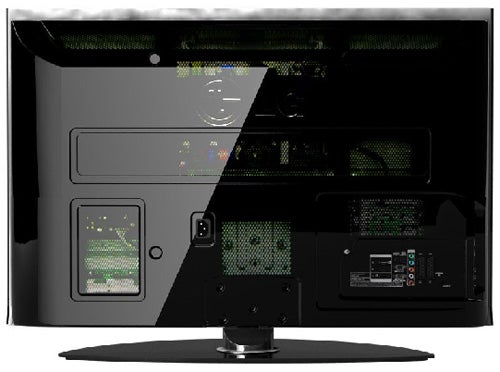 Also impressive for the 32PG6000’s money is the amount of video processing it brings to the party. Kicking this off is LG’s Dual XD Engine system, which applies colour, black level, noise and motion handling improvements separately to RF feeds and external input sources. We’ve had cause in the past to bemoan some LG TVs performances with standard definition broadcast material, so hopefully this provision of a dedicated tuner processor will really make a difference. A 100Hz engine, meanwhile, is on hand to double the usual TV frame rate in a bid to reduce motion judder. 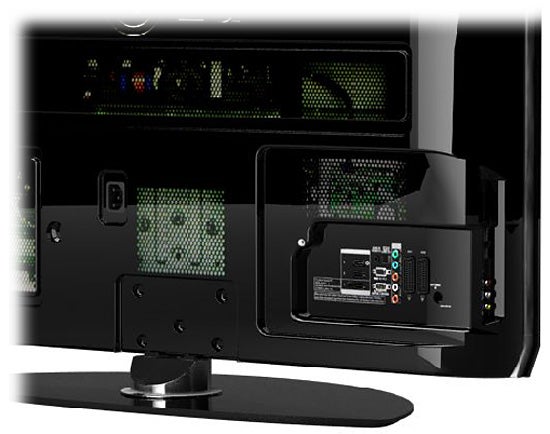 With so many features on board you could be forgiven for thinking that the 32PG6000 must be a bit of a pig to operate. But here again the set confounds expectations thanks to a really elegant, impressively presented set of onscreen menus, and a well thought out if slightly plasticky remote control.


So far we’ve seen precisely zero that could explain the 32PG6000’s extremely economical price, raising serious fears that it’s with its picture quality that the set must inevitably come crashing down. But actually, while certainly not perfect, its pictures are certainly good enough to outgun those of most budget rivals.


The 32PG6000’s biggest strength versus most LCD models is its black level response. During a run-through of ”Terminator 2” on Blu-ray, for instance, the night skies surrounding the trucks during the chase sequence that ends in the smelting factory contain more shadow detailing subtlety than you get with pretty much any budget LCD I can think of. And there’s also less trouble from the notorious ‘grey mist’ effect so common over dark pictures in affordable flat telly circles. Though before you get too excited, black levels are also an issue we’ll return to in the negatives section later on…

It’s refreshing, too, to find fast moving scenes, such as any of Arnie’s fight sequences, looking more or less completely free from the sort of blurring and resolution loss over motion that’s so commonly witnessed with LCD TVs, particularly at the cheap end of the market. This fact helps the image deliver HD images in particular with a pleasingly immediate sense of clarity and ‘snap’.


Also impressive is the lack of noise in the 32PG6000’s pictures, with both high and standard definition sources – even the set’s built-in digital tuner. LG’s Dual XD Engine definitely earns its corn in this regard.


Fine detail levels, meanwhile, are good for a non-HD TV, contributing further to the sense of sharpness with HD material and making it easy to discern such ‘HD giveaways’ as pores on faces – even those of T2’s cyborgs! – and weaves in clothing.


Another image strength concerns the 32PG6000’s colour handling, as it reproduces skin tones and subtle colour blends unusually well for the sub £600 32in market. And finally, I really can’t stress strongly enough how great it is to be able to watch a 32in TV from somewhere off to its side without any reduction in its picture quality whatsoever. 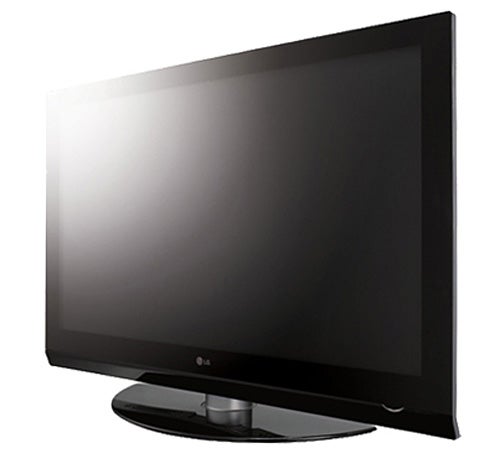 In fact, the 32PG6000’s freedom from LCD’s colour desaturation and contrast reduction viewing angle issues is potentially reason enough in itself to win the hearts of anyone forced to watch their TVs from the side.


The main catch with the 32PG6000’s plasma nature is that its pictures aren’t very bright compared with the majority of today’s LCD rivals. Even using the Vivid image setting – a setting we’d recommend you actually avoid on account of its tendency to exaggerate noise levels and over-egg colour saturations – the picture looks generally slightly muted versus even a pretty basic LCD TV.


Also, while colours are predominantly very good on the 32PG6000, the set isn’t wholly immune to plasma’s tendency to present reds with a rather orangey undertone. To be fair, the longer I lived with the TV the less distracting this problem became, indicating its relative lack of severity compared with plasma technology historically. But I never managed to completely remove the issue, no matter how much I played with the TV’s endless colour adjustments.


Returning to the black level response we praised earlier, while the 32PG6000’s presentation of black gets both deeper and more detail-filled than that of most budget LCD sets, it still falls comfortably short of the black level depths of the best the plasma world has to offer, with a gentle grey/green pall discernable over any of T2’s night-time scenes.


Patches of really fine detail, such as those thrown up by stripey ties and suits, can throw up a little shimmering noise too, even when watching HD. And the 32PG6000 is not the best handler of 1080p/24 sources, presenting them with a touch of judder during camera pans, despite the set’s 100Hz processing.

Arguably the 32PG6000’s biggest weakness, though, is its susceptibility to image retention, whereby a bright, static image element – such as the TV’s own onscreen menus – can leave a shadowy trace of itself behind for quite some time after it’s supposed to have vanished.


You don’t notice these image echoes over bright parts of the picture, but they can certainly remain for some time over dark areas – especially if you use the set’s rather attractive ‘Fresh Contrast’ setting and eminently avoidable Vivid image preset. 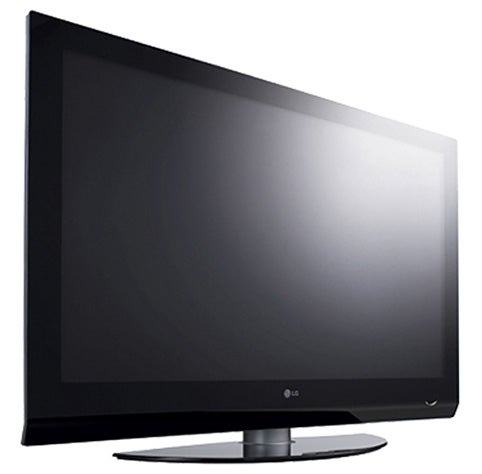 Turning to the 32PG6000’s audio, it’s actually rather good. Vocals are clear and powerful, the soundstage spreads impressively far across your living room, treble information is presented clearly and without harshness, and there’s generally less muddiness to the audio presentation than we’re accustomed to finding on 32in flat TVs – especially those with invisible speakers. A little more bass to underpin action movies would have been the icing on the cake, but this is a superior audio effort overall.


The 32PG6000 is not a perfect TV by any means. But it’s certainly a very worthwhile – and remarkably affordable – addition to the 32in scene, with its plasma technology offering distinct advantages over 32in LCD models that ensure it’s far from the mere gimmick a small part of us had suspected it might be. 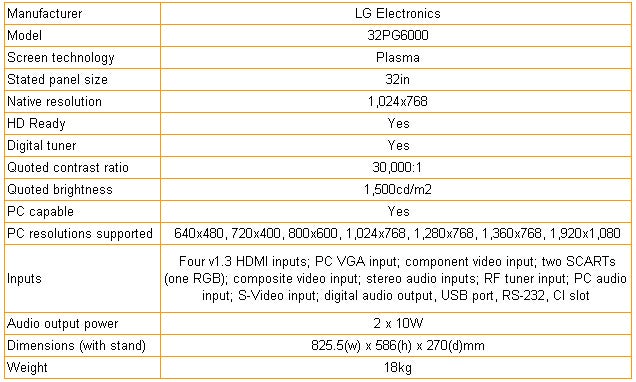