On any normal day, you’d be pretty pleased to find even a bog-standard, no-frills-whatsoever 22in LCD TV selling for under £280 including delivery. But today is no normal day.


Firstly, we’re just two weeks away from Christmas, and the big brands are thus even more competitive than usual. And secondly, the 22in TV in question is from arch price buster, LG. And so it is that we find the brand’s new 22LU7000 somehow managing to offer a built-in DVD player as well as a 22in Freeview TV for 273 pounds and 13 pence. 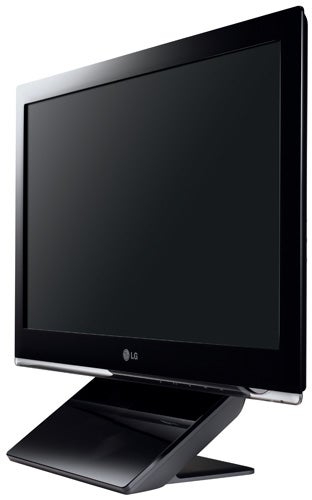 As if this wasn’t impressive enough, LG has even managed to integrate the DVD drive in a rather innovative way. For rather than following the usual approach and just providing a slot down one of the screen’s rear sides, LG has boldly attached a whole extra DVD player section to the TV’s bottom edge, which angles gently out and hides the disc tray behind a pair of slide back doors.


This instantly makes the 22LU7000 the most ergonomic DVD/TV combi I’ve ever seen, removing from the equation the usual difficulties – especially if your combi TV is hung on a wall – associated with trying to locate a typical rear-mounted slot when you want to insert a DVD. 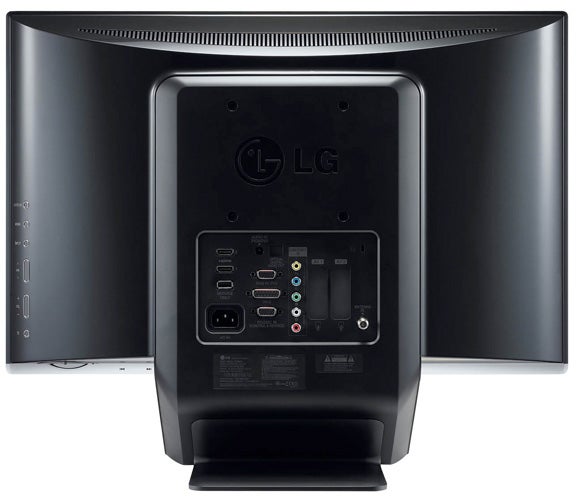 On the downside, the 22LU7000’s intriguing approach to DVD integration obviously makes it a bigger unit than any other 22in TV we’ve ever seen, and dust has a nasty habit of settling on the angled disc tray. I have to say, too, that for me the disc tray doors feel a bit flimsy, and the rather rickety, strained sound the unit emits when they open is a little alarming.


But typically for an LG TV, the 22LU7000 wears a stylish finish, and the sheer cleverness of the whole concept will make it instantly aesthetically appealing to gadget hounds.


For such an affordable combi TV, the 22LU7000 is respectably connected. It has two HDMIs, for instance, for feeding in HD consoles or Sky HD. Plus there’s a digital audio output so you can feed digital audio tracks from DVD discs out to a separate AV receiver, if you wish; a D-Sub PC input; and even a USB input that can play both MP3 audio and JPEG photo files.

As we’d expect given both its price and its built-in DVD player, the 22LU7000 goes for an HD Ready rather than Full HD resolution. But this is really no big deal on such a small screen, and actually could well lead to better pictures with the standard definition sources likely to be taking up the majority of its time, since the TV won’t have to work so hard with its rescaling processing. 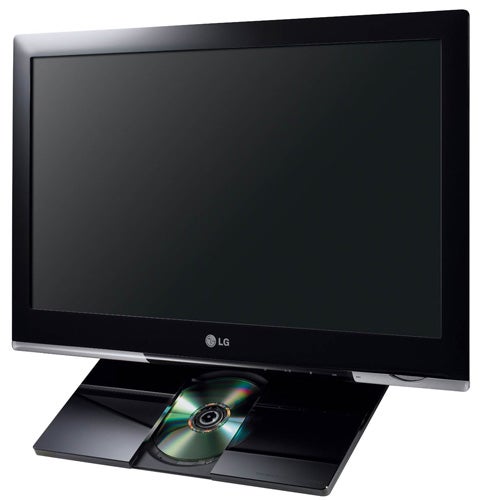 More good news for the 22LU7000’s money finds it supporting 1080p playback (though I guess this probably won’t matter to many people intentionally buying a TV because it’s got a built-in DVD deck!), and sporting a dynamic contrast system that can deliver a solid looking contrast ratio of 8,000:1. Dynamic contrast systems are increasingly common at the low end of the market, but certainly not guaranteed.


Without many picture adjustments or features within the elegantly designed onscreen menus to delay me, and with the 22LU7000’s amazingly low price fixed firmly in my head, I set about actually finding out what the TV could do without really expecting very much. So I guess it’s a minor triumph for the TV that it comfortably excels my expectations in at least some picture departments 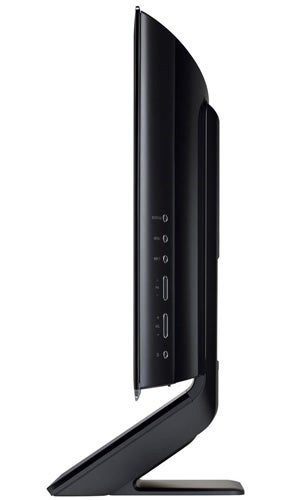 Images look bright, for instance, making it more watchable in a very light environment, such as a sunroom, than the majority of its similarly small rivals. In typical LG style, moreover, the brightness helps the 22LU7000 blaze out a really quite intense colour range, with full saturations and plenty of dynamism.


As I hoped would be the case, the 22LU7000 additionally appears to benefit from having an HD Ready rather than a Full HD resolution, since it does a really quite nice job of inserting the extra pixels of picture data necessary to convert DVDs and Freeview broadcasts to its native HD Ready pixel count. There’s more sharpness and less of a tendency to exaggerate noise than we usually see on cheap flat TVs.


Furthermore, the lack of noise evident during DVD playback shows that the integrated DVD deck is at least of a passable quality, with no really distracting MPEG artefacts cropping up during the digital decoding process.

The 22LU7000 isn’t just interested in standard definition, though; in fact, its scaling engine also helps it deliver an impressive sense of detail and crispness when fed HD sources.


At first glance, I was even quite satisfied by the 22LU7000’s black level response, with relatively straightforward ‘studio’, daytime TV fodder seeming to have enough of a range between its darkest and brightest picture areas to look snappy.


However, the wheels come off a little if you get the built-in DVD deck to play an overwhelmingly dark movie scene. For without bright image elements to distract me, I couldn’t help but note obvious evidence of LCD’s notorious ‘grey mist’ effect. What’s more, dark scenes also showed up distracting backlight bleed over the outermost cm or so of all four sides of the picture. 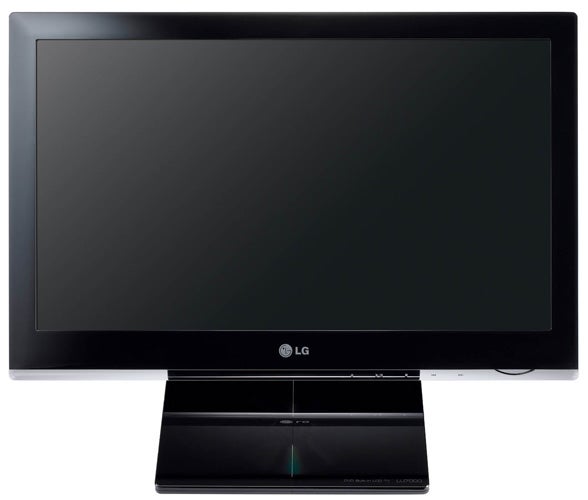 Dark scenes also let the colour side down a little, by suffering a few notably offish looking colours – over-dominant reds, salmony skin tones, etc. This stands in stark contrast to the naturalness of most tones during bright scenes.


One final flaw in the 22LU7000’s picture make up is a sporadic tendency to suffer with motion blur. This really doesn’t crop up all that often compared with the smeary mess commonly seen on budget, small LCD TVs. But funnily enough, its rarity means that when you do see it, it stands out like a sore thumb.


Shifting focus to the 22LU7000’s sound, it’s not too bad by 22in LCD standards. Though of course, those standards are notoriously low!


The highlight of the audio performance is the way the set manages to eke out more of the subtle details in a mix than is common, which helps give a film soundtrack a sense of space and dynamism. The speakers don’t generally distort under pressure, either. Just don’t expect your favourite action DVD explosions to resonate with any significant amount of bass, or the soundstage to expand far beyond the confines of the TV’s body.


Although the LG 22LU7000’s performance is predictably flawed, its extremely affordable price makes its AV shortcomings reasonably easy to tolerate. Plus its genuinely innovative approach to fitting two products into one box is a winner all the way. 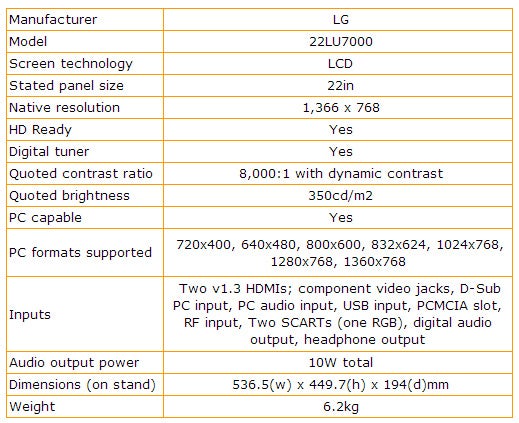