Every so often when testing printers and all-in-ones, we get that strange feeling of déjà vu, that we’ve seen the machine we’re testing before. Occasionally this is because we’ve inadvertently been sent a device we’ve already covered, but in the case of Lexmark’s X7675, it’s because it’s so similar another model.


The X7675 bears such a strong resemblance to the X4975ve we reviewed a few weeks back, it’s hard to see why both are needed, particularly since this one provides fax and is cheaper than the lower numbered model by around £40. 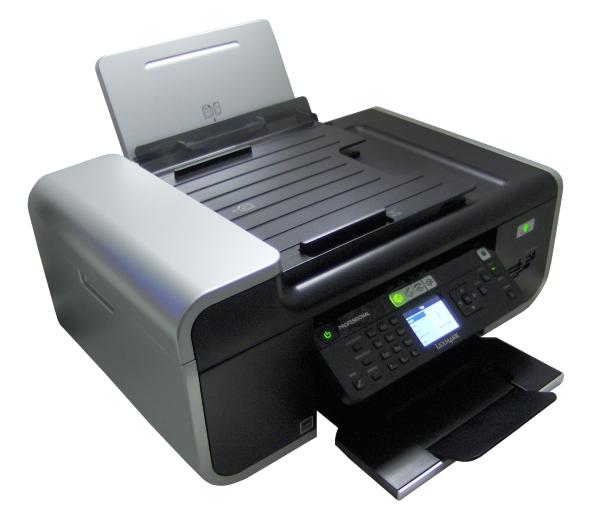 You can read the machine description of the X4975ve and get nearly all the details of the X7675. It has the same low-profile Automatic Document Feeder (ADF) over an A4 flatbed, the same silver and black colour scheme, the same rear paper feed and front output tray, the same card slots and PictBridge socket.


The key differences are in the control panel. Where the panel on the X4975ve looked a bit lop-sided, due to the blank area to the left of the 61mm colour LCD, the X7675 has a fax number pad and buttons for address book, dial tone and redial to balance things out. Four mode buttons behind the LCD also add fax to scan, copy and photo print modes.


Lift the scanner section and the machine slides its twin cartridge carriers to the centre of the carriage, so the high-yield, XL cartridges can be clipped in place. High-yield cartridges are part of the Professional designation of the machine; the other is a five-year warranty.

The software package provided with the machine includes the Abbyy Finereader Sprint OCR application, as well as Lexmark’s own productivity suite. Between them, they handle all functions of the machine, though with varying degrees of sophistication.


There are three different ways of connecting the X7675: USB, Ethernet and Wi-Fi. There’s also three ways of installing it wirelessly, though the most obvious one seems to be missing. You can connect the machine temporarily with the supplied USB cable and let your PC tell it about the network, you can enter a PIN from your router into the control panel of the all-in-one or you can enter a pass number displayed on its LCD into the Web page of the router.


For many, though, the easiest way to log in to a wireless network would be to simply enter the network’s WEP or WPA pass code into he all-in-one – this doesn’t appear to be an option.

Lexmark’s quoted speeds for the X7675 are very similar to the X4975ve’s, which is what you would expect, considering both use the same print engine. For some reason, though, the draft black print speed of this machine is rated 2ppm higher than the other, at 32ppm. In normal print mode it’s rated at 13ppm and the colour print speeds are 27ppm draft and 5ppm normal.


As usual, the specifications bear little relation to what we saw in our tests and our five-page black text print took 1:25, a real-world normal speed of 3.5ppm. On the 20-page document, where the 37 seconds of processing time has less effect on the overall result, the speed rose to 5.26ppm, but this is still less than half the specified figure.


Duplex comes as standard and Lexmark all-in-ones do rather better than their Canon and HP rivals at duplexing, as there’s a much shorter pause between printing first and second sides. Our 20-page document printed duplex in 4:41, a speed of 4.27spm.


There was a surprising difference between the print speeds for 15 x 10cm photos, depending on source. Printing from a PC took 2:16, but when we went straight from a PictBridge camera to the X7675 it took even longer at 2:32. The best speed, though, came by printing from an SD card, which took just 1:12. This is a reasonable speed, while the others are pretty poor. 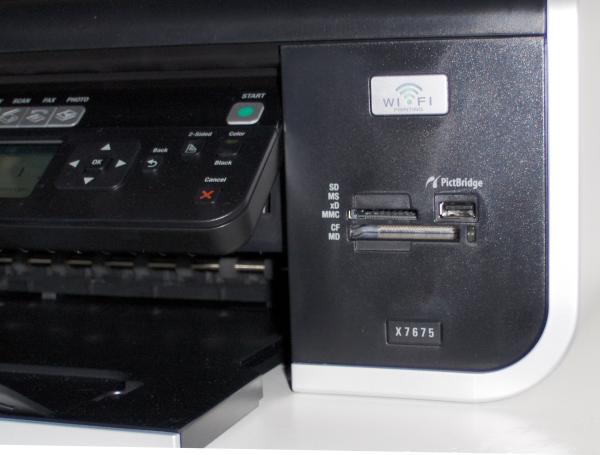 The print quality from this machine isn’t a patch on its stablemate’s. While straight text print isn’t too bad, we did see quite a bit of shadowing, where there is some ink smudging due to the heads touching the paper. This has the effect of making some text look bold, when it isn’t.


As we’ve already said, the machine uses the same print engine as the X4975ve, which gave noticeably better print, so we’re prepared to believe this smudging effect is particular to our review sample.


Colour graphics are smooth and bright and a colour photocopy does better than many in reproducing the original colours. Our five-page text copy from the ADF, however, showed worse smudging and emboldening than the original and was very blurred.


Our photo print from a PC was also poor, with colours much too dark and virtually all detail in shadowed areas lost. We can’t really recommend the print quality from this machine against any of its rivals.


Running costs using the two high-yield cartridges come out at 4.8p per page for black and 8.76p for colour, using ISO yield figures. Both of these are reasonable for a machine at this price, though the black print price is considerably higher than from even a budget laser printer.


If we’d seen the same kind of results from this machine as we saw from its more expensive stablemate, it would have been hard to understand why the other machine was needed. The X7675 should be better value, but the print quality here is much worse and print speeds vary considerably, particularly when printing photos. Unless this is an aberrant sample, this machine can’t be recommended.