Lexmark’s desire to produce the lowest price printers on the market has done very well for it. Its entry-level machines are found in most high-street shops as well as selling many thousands on-line. Its latest wheeze, to sell three-colour printers as the epitome of simplicity, has now extended to its cheapest all-in-one device to date. We found the X2350 on-line for a tad under £40, which looks like a bargain.


There’s a great simplicity to the style of the X2350. It looks like the designers have started with a white, rectangular block, curved the edges off and cut a block out of the front. This is where printed pages come out, once they’ve been fed through from a near-vertical hopper at the rear. An extending grey tray keeps them off the desktop. 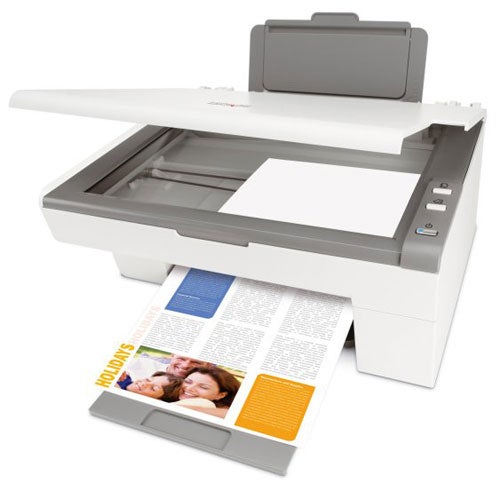 The scanner cover is a simple, hinged lid and the whole of the top section of the machine lifts to give access to the single print cartridge. A strut clicks out to support the top section while you’re fitting it.


At the front right is a control panel of three buttons, for power, scan and copy (the machine can copy even when not connected to a PC). At the back is one of Lexmark’s clever block power supplies, clipped into a recess that leaves it nearly flush to the back panel.


Setting up the X2350 could hardly be simpler. Plug in the power lead, plug in the USB cable and install the software from the CD. As well as the printer driver, Lexmark includes its All-in-One Center, complete with OCR software and a basic photo editor. It’s good to see reasonable support for the 600 x 1,200ppi scanner in the suite.


Despite Lexmark’s spin on the use of a single ink and head cartridge, we don’t buy the reasoning. The company claims to have removed all confusion in buying spares and reduced running costs. There’s just one £13 cartridge, the line goes, and we’ve called it the No 1 cartridge, to make it still simpler. Fair enough, but most people, even first-time buyers, are aware of wanting to print black text and colour photos, so the idea of separate black and colour cartridges is hardly rocket science.

A more plausible explanation is that designing and making a three-colour printer, with just one cartridge, is much cheaper than producing a twin-cartridge device. Historically, there were three-colour ink-jets before four-colour ones and the four colour designs won out. This was because black, produced by printing cyan, magenta and yellow on top of each other, is, to be blunt, rubbish.


And so it is here. Print a page of black text and you get a page of brownish grey text which says, to anybody reading it, ‘This was produced on a very cheap printer’. There’s nothing you can do about it, either; you’re stuck with three colours on this machine.

The only reason Lexmark can get away with the print quality is that plain paper print is only half the picture. Quite a few dedicated photo printers, including models from HP as well as Lexmark, use only three colours and still produce very respectable photo prints. The X2350 produces very respectable photo prints and if that’s all you’ll be doing with it, fine. Just don’t expect plain paper prints or copies of the same quality.


Print speeds range from slow to very slow, nowhere near the quoted 15ppm (though that’s in draft mode). We saw just over 2ppm for black text and around 1.7ppm for colour. It took over two minutes to print a 15 x 10cm photo, so it’s no express. 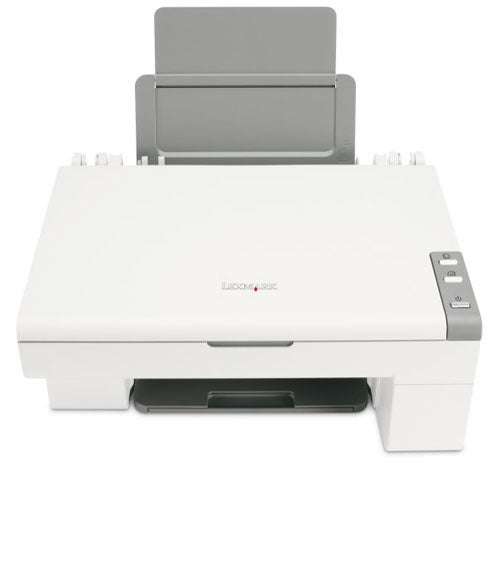 It could hardly be simpler to work out the running costs of the X2350. With just one cartridge, you simply divide its cost by the number of pages it’ll produce and add in the cost of the paper. We found cartridge and paper costs a smidgeon cheaper than when we tested the Z735, which uses the same No 1 cartridge. Lexmark now quotes 200 pages at 15 per cent cover (either black or colour), slightly different from before.


When we ran page yield tests, we got 286 black pages from the machine – though it reported low ink at a pretty daft 128 pages – and 252 colour pages. These figures and the new prices give costs of 4.8p for a text page and 24.9p for a colour one. The black print cost is high, as you’re effectively printing 15 per cent cover, but the colour print cost is surprisingly low. You also have to bear in mind the low initial price of the X2350.


This is, without doubt, the least expensive all-in-one machine on the market. It works well, if a little slowly, but is mainly held back by its plain paper print quality. Photos are fine, but black text and colour graphics look insipid – as if they’ve all been printed in draft mode. Best advice is to see a plain paper print sample before you buy.