Tablet PCs have traditionally been a niche concern. With a few notable exceptions, like the HP Pavilion tx2050ea, they’re made exclusively with business users in mind and particularly those who, in marketing parlance, work in “vertical environments” – otherwise known as people who stand up a lot! This could be a supervisor in a factory, warehouse or shipping depot, an architect on a building site or an executive moving from meeting to meeting, but whoever it might be, the needs and usage are very specific, often requiring bespoke software to get the job done. And, when it comes to Tablet PCs, Lenovo and the ThinkPad brand is oftentimes an obvious port of call.


Today we’re looking at the ThinkPad X200t which is, believe it or not, the first widescreen Tablet PC ever to don the ThinkPad name. Based on a 12.1in, 1,280 x 800 resolution display it bears all the hallmarks of the ThinkPad brand: it’s black, it’s adorned in soft-touch plastic and it’s built like a Roman road. 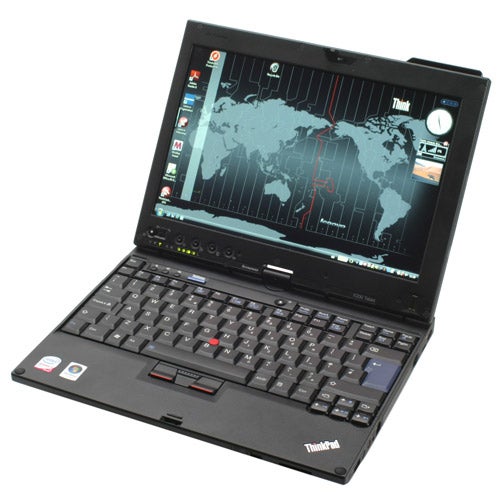 Indeed, outside of genuinely ruggedized notebooks, such as the ToughBooks from Panasonic, it’s hard to think of a notebook brand that’s as reassuringly rugged as a ThinkPad. Its magnesium alloy chassis and high quality plastics ensures every element of the machine is reassuringly sturdy and robust, while the 360 degree hinge for the screen has a smooth but secure action. 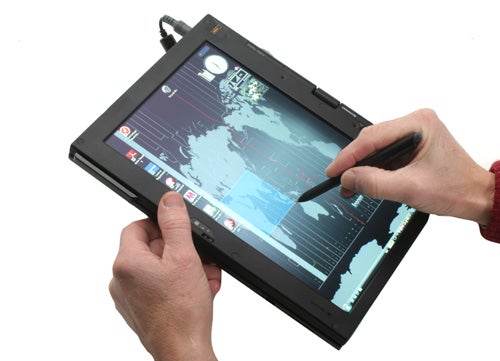 Nowhere is this quality more apparent, though, than in the keyboard. Though the X200t will obviously live or die on the quality of its tablet functionality, if being used as a conventional notebook its keyboard will serve it well. Keys have that firm and positive feel that defines the ThinkPad brand, setting the standard to which all other notebook keyboards are judged. There are desktop keyboards that can’t even approach the level of comfort and feedback on offer here.


This is matched to a near flawless layout, the only blemish being the Fn key sitting outside the Ctrl key – an old tradition among ThinkPads. This keyboard is also spill-proof, so can deal with the occasional accident and won’t be phased by the occasional spot of English rain or even snow, as has been the case recently. 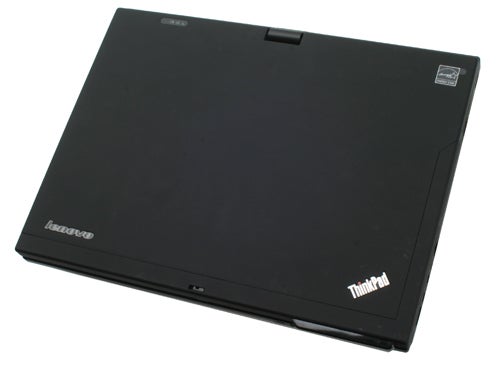 One thing you will note, though, is the lack of a touchpad. This, in truth, seems an odd omission, but there still remains the traditional ThinkPad TrackPoint and accompanying buttons. These are hinged to provide the ideal tactile feedback, while the button in the middle enables you to scroll documents using the TrackPoint. As for the TrackPoint itself, it’s ergonomically sized and more than accurate enough for regular use on the move, though most will probably want to use a mouse when deskbound.

Tablet PCs, given their specialised nature, rarely come cheap and the X200t is no exception. There’s only one configuration available in the UK and it’s on sale for around £1,400 from online retailers or £1,500 from Lenovo directly. For this money, though, you do get a very well specified machine featuring every component you’re likely to need when working on the move. Unsurprisingly this means integrated HSDPA for which an antenna is attached to the top of the screen, as well as the usual stalwarts like Draft-N Wi-Fi and Bluetooth. There’s also a Trusted Platform Module and an accompanying fingerprint reader for secure authentication and encryption of data, while this machine is vPro certified so can be easily integrated into an existing infrastructure that uses Intel’s management systems. 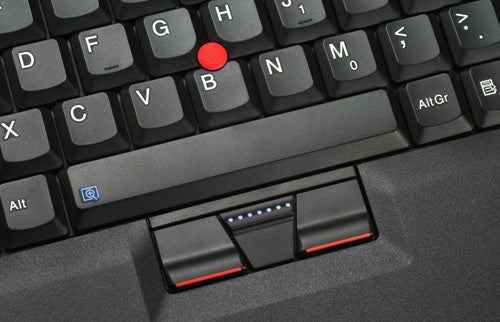 Unlike the X200, on which the X200t is based, the X200t doesn’t use a full-power Core 2 Duo processor, instead opting for a more frugal low-voltage dual-core SL9400 running at 1.86GHz. This strikes a nice balance between performance and power saving, since it consumes only 17W at peak, but delivers a little more processing grunt than the arguably more common ultra-low voltage CPUs.


Accompanying this is 2GB of 1,066MHz DDR3 RAM, which is more than enough for the likely usage, and a 5,400rpm 250GB hard drive. There’s no option for an SSD in the X200t as yet, but the standard mechanical drive does feature a free-fall sensor and combined with the sturdy and well designed chassis it should remain safe in event of a fall.

As a business machine it’s no surprise to see Intel’s limited, but basically sound, integrated 4500M HD graphics. This helps keep the weight down, as well as enhancing battery life, while the lack of an integrated optical drive and the relatively low-capacity four-cell, 28 Watt-hour battery lead to a manageable 1.7kg overall weight. Clearly dedicated ultra-portables can boast more supermodel-like weights, but the added complexity of a convertible hinge and significantly thicker touch-sensitive screen account for a great deal.

As for the screen itself it primarily uses a supplied digitiser pen for input and though Lenovo also advertises it as finger friendly, we found it to be anything but. Though you can use your finger, it often requires unrealistically hard stabs to make it effective and the small icons that still make up the majority of Windows’ UI are more or less impossible to use. This is a particular disappointment given how the Dell Latitude XT, which uses a capacitive screen similar to the iPhone, proved it is possible to make a Tablet PC that can be used effectively with just a finger,

Thankfully, with the provided digitiser pen things are far better. Handwriting recognition is excellent, while the pen features a tactile soft-touch finish and is nicely balanced for excellent handling. Moreover, though the ability to use one’s finger from time-to-time would be appreciated, it’s the digitiser that will be doing most of the work and here the screen proves itself to be accurate and responsive. Like any good Tablet PC the screen orientation also changes automatically when switching to tablet mode, while there are dedicated buttons for power and screen orientation to the left of the hinge. Also, either side of the hinge, are microphones that in tandem with the webcam and integrated HSDPA mean you could conduct business ‘face-to-face’ (as it were) from almost anywhere.

In the performance stakes the use of the intermediate low-voltage processor means the X200t outperforms most ultra-portables. Indeed in PC Mark Vantage the X200t was 46 per cent faster overall than the Latitude XT; hampered as it was by a slower CPU and a slower hard drive. This trend was continued in our in-house testing, where the X200t remained almost identically faster than the Latitude XT. 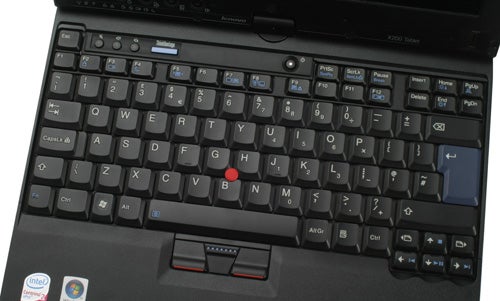 This, you’ll probably agree, is a significant difference and one you’re bound to notice in general operation. However, battery life on the two is more or less identical. In fact, in the lower intensity Reader test both registered exactly three hours and eight minutes, while in the Productivity test the X200t managed just less than three hours. Neither of these results is great compared to dedicated ultra-portables, but an eight-cell battery is available separately and should offer exactly double the battery life should you need it.


More importantly, though, there’s no aspect of the X200t’s raw performance that is bested by the Latitude XT. This isn’t to say that the XT doesn’t have some advantages over the X200t; it is slimmer, lighter and arguably more stylish than the ThinkPad. However, it’s also more expensive for a comparable specification and while the screen on the Latitude XT is definitely superior, aside from its reliance on a digitiser pen the Lenovo’s screen is very good. 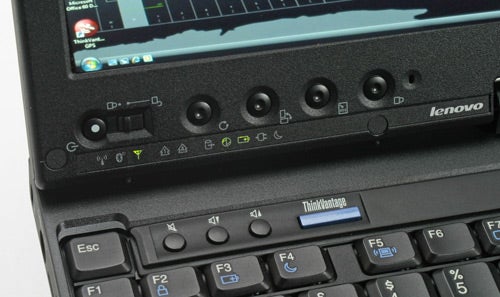 We’re also more convinced by the X200t’s durability, largely due its slightly more industrial feel compared to the brushed metal niceties of the XT. Fundamentally, though the XT has many qualities, the ThinkPad seems a slightly more comprehensive solution if a Tablet PC is an absolute must. 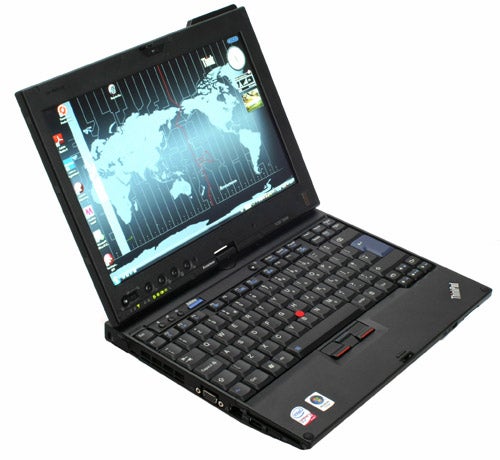 
Lenovo once again delivers an excellent ThinkPad that addresses its core audience very well. Its lack of a finger friendly screen might hamper it somewhat in the long run and battery life out of the box could be better, but aside from these issues it’s a fine effort.