If you’ve read our 2010 Awards or, more recently, the Christmas Netbook Buyers’ Guide, you might remember that one of our winning choices was Dell’s M101z (thanks in large part to its AMD Athlon Neo processor, which makes for a great, and usually more powerful, alternative to Intel’s Atom). Thus we’re quite excited to be looking at Lenovo’s 11.6in ThinkPad X100e, which uses the same platform but costs far less – despite including a copy of Windows 7 Professional! Combined with the ThinkPad line’s generally legendary build quality, premium finish and attention to detail (check out the ThinkPad X200t review for an example of what we mean), is this the ultimate budget ultraportable? 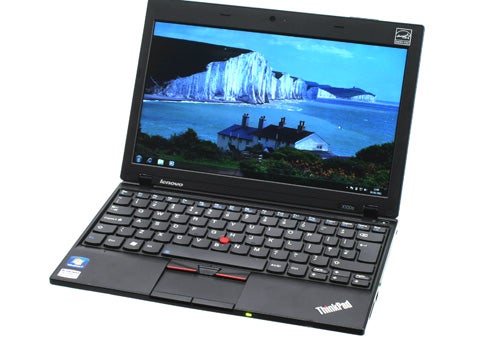 Going by build, the answer is a resounding yes. The X100e certainly doesn’t put the ThinkPad reputation to shame in this regard: finished in smooth semi-matt black plastic (aside from the screen’s bezel, which is slightly textured) that doesn’t mark or scratch easily, it’s brick-like in its solidity. There is simply not a hint of flex or creak anywhere in its chassis, and it’s been a very long time since we dealt with an affordable ultraportable (or indeed any laptop) we could say that of. About the only sub £400 competitor that springs to mind in this regard is Dell’s rugged Latitude 2100, which is vastly inferior in every other regard. Another welcome ThinkPad feature is that the screen will fold so far back as to be almost flat.


Visually, the X100e’s semi-matte black design (it’s also available in “heatwave red” when buying direct from Lenovo) is almost identical to its siblings and predecessors, so if you’re a fan you won’t need convincing. Newcomers might find the red track-stick in the middle of the keyboard and rather prominent logo on the palm-rest slightly off-putting, but overall this Lenovo exudes understated class. It’s a machine that means business and isn’t afraid to show it. 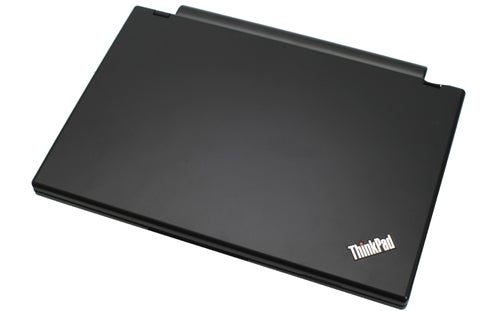 Specifications-wise our 2876 configuration of the X100e is also excellent for the price (you can get other models with better specifications, but naturally these cost more). Starting off on the CPU front, we have a single-core Neo running at 1.6GHz. It’s backed by 2GB of DDR2 RAM, keeping the 32-bit version of Windows 7 Professional running fairly smoothly.


Not only is this double the memory of most netbooks, but the OS is also a significant improvement over the Starter edition you’ll find on the majority of rivals. Professional will handle up to 4GB of RAM (should you upgrade in the future) as well as allowing you to change the desktop background, and with an added ‘XP mode’ over Home Premium it maintains better backward compatibility. The hard drive is a fairly standard 250GB, 5,400rpm model. 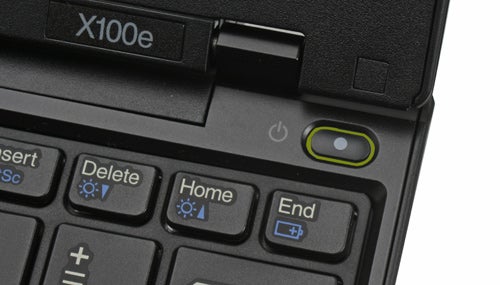 When it comes to graphics, the X100e relies on the same integrated Radeon 3200 found in most Neo machines. While not exactly a powerful solution, it’s a sight better than Intel’s alternatives, and intense Full HD video playback is certainly no problem for this ThinkPad – a good thing considering it 1,366 x 768 screen gives you more detail than you get from most netbooks. However, 3D gaming won’t be on the cards, with frame rates for our standard TrackMania Nations Forever test in the single digits.

Connectivity is unfortunately where we find our first disappointment with the X100e, as there’s no digital video output. Where most Neo-based laptops offer HDMI, Lenovo has chosen to go with good old VGA only, found at the machine’s rear. While this decision is somewhat understandable given the ThinkPad series’ business leanings, the death-knell for analogue video has already sounded, and it’s a severe limitation. 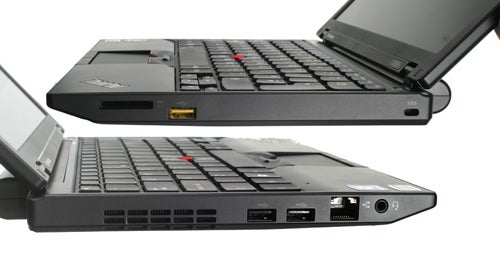 This really is a pity as the X100e was doing so well, and indeed once past this speed-bump continues impressively. On the left you’ll find twin USB 2.0 ports, a Gigabit Ethernet port (where most netbooks offer only standard Ethernet) and combined headphone/microphone jack. To the right we have a memory card reader and a third USB port, which is coloured yellow to indicate that it is ‘always on’ (i.e. you can use it to charge your phone even if the laptop is powered off). Finally, wireless credentials are handled by both Wi-Fi N and Bluetooth.


Usability is also top of its class. If you’ve used ThinkPad keyboards in the past, you’ll know they tend to offer one of the best typing experiences going. Haters of your average isolation/chicklet-style keyboards especially will find much to love here, for though Lenovo’s spill-resistant, full-size effort might appear similar, its large, slightly concave keys offer deep, crisp feedback. In fact, off the top of our heads only HP’s Mini 110c series comes close. Our only niggle is that Lenovo is one of the few remaining manufacturers to insist on putting the Fn key to the outside of Ctrl. 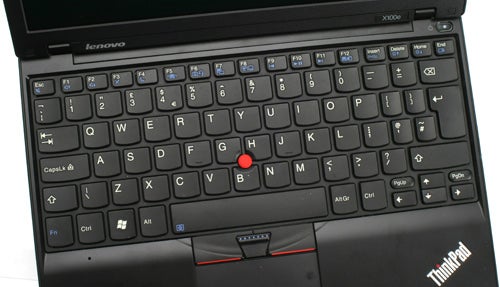 The smooth, multi-touch touchpad is likewise a pleasure to use, and its distinct buttons offer excellent feedback. It’s not the only pointer option, however, as ThinkPads also sport something called a TrackPoint. This is a tiny, rubber-topped joystick in the centre of the keyboard operated with the tip of a finger. It has its own set of three buttons above the touchpad, and while it does take a little getting used to, after a while it’s quite easy to operate and even beats the touchpad in some situations. Regardless, it’s great to have the choice between either input method.


Rather than the usual (and wholly inadequate) 1,024 x 600 resolution most netbooks tend to have, Neo-based machines usually opt for a more respectable 1,366 x 768, and the 11.6in example on the X100e is no exception. This not only means you get excellent sharpness more desktop space to play around with, but also means 720p HD can be displayed natively. Not only that, but as you would expect of a ThinkPad the screen offers a matte, anti-reflection coating that’s a joy to work with in and out of direct light. 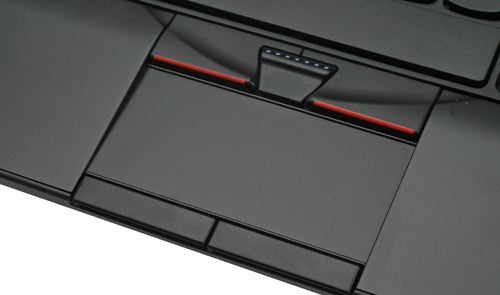 Horizontal viewing angles are adequate and contrast is decent though not great, with a strong bias towards the dark end of the scale (meaning you’ll see more detail in dark material). There’s no sign of light bleed and backlighting is fairly even, and while some banding is visible it’s rarely an issue. Overall then, the screen does a good-enough job, fairly average for its size but certainly superior to most netbook displays.


This Lenovo’s speakers are nowhere near as interesting. Though they manage the basics competently enough without distortion, their maximum volume is rather low and they fail to match those found in the smaller

The single-core, 1.6GHz Athlon Neo beating at the heart of the X100e does an adequate job as long as you keep the load light. While we would usually recommend two cores as a minimum to go by, for daily productivity without intensive multi-tasking this will still significantly outperform your average Atom-based netbook (though not the newer 1.8GHz dual core Atoms as found in the Asus EeePC 1215N).

In the chart above you can also see it compared to its dual-core sibling as found in the M101z. You can of course opt for this same dual-core variant in the X100e, but that model is not as easy to find as this 2876 version and demands a significant premium.


As already mentioned, gaming is not really much of an option on the Radeon 3200 graphics, and at best you can expect to run old or undemanding 3D titles. In general use the X100e stays relatively quiet, though it does become more audible and gets rather warm under load. 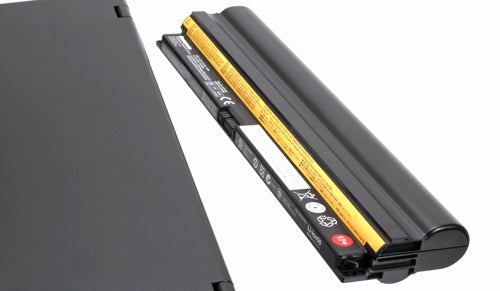 So far then, it’s all very impressive, especially if you’re not particularly bothered about the lack of digital video out. However, time away from a socket – or rather lack thereof – is this ThinkPad’s biggest failing. Despite looking impressive and sticking out the back, the six-cell, 5,200mAh/57Wh battery will only last you around four hours, if you’re lucky (it failed to complete a single MobileMark run and managed only two hours and 50 minutes in our netbook test, with screen brightness at 50 percent and wireless radios turned off).


So we guess the most pertinent question becomes whether it’s worth paying the extra £52 over this Lenovo’s £367 to get the base configuration of the Dell M101z? For most folks, the answer will be yes. The ThinkPad might have it beat in style, quality and ergonomics, but with the Dell you get better graphics with HDMI-out and significantly better battery life – with the option to expand this further using an optional nine-cell battery. 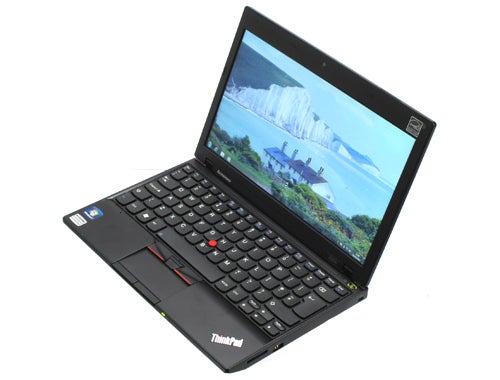 If you don’t mind the lack of digital video out and if you don’t require battery life longer than around four hours, Lenovo’s ThinkPad X100e is an excellent choice, thanks to its advanced OS, superb build quality, decent specifications and class-leading usability – all while remaining easy on the wallet. However, even at under £330 that might just be one if too many, especially with some compelling alternatives available for only a little more.