Hands on with the Lenovo Pocket Projector

Set to launch before the end of this month, the Pocket Projector is a very pretty little device and one of the most useful pico projectors we’ve ever seen.

As you might expect, it’s small – about the size and weight of an iPhone 6 Plus, but three times as thick. So not exactly pocketable, but not far off. What makes the Lenovo Pocket Projector interesting is that it’s split in half. This lets the half with the lens tilt to an angle that’s useful for viewing, while the other half anchors it to the table or any flat surface you care to place it on. No more balancing a projector on books or fiddling with awkward tripods trying to get the picture level. It can rotate up to 90 degrees, making it the perfect solution for projecting onto a ceiling. 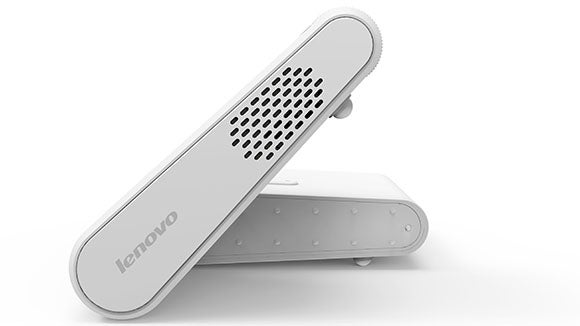 The version we looked at was an early pre-production model, and as such had a few issues. Lenovo assures us that the final product will have a rock-solid hinge to keep it firmly in place, and automatic keystone settings to ensure you’re looking at a perfect 16:10 rectangle without having to mess around with the settings. If it works well, this could be a blinding little projector that can have applications in a small office or for on-the-road salesmen, as well as those who want a neat solution for watching movies on holiday.

DLNA and Miracast compatibility (via Wi-Fi) mean that it should be a doddle to throw media to the Pocket Projector, as long as you’ve got a compatible smartphone. Our demo used a microSD card slotted into a port hidden away where the two parts of the projector split – it’s another way to get content onto it.

With a resolution of 854 x 480, 50 lumens brightness and an image size of up to 110 inches, the Lenovo Pocket Projector isn’t the best-specced pico projector on the block. There are some cheaper, brighter solutions out there. But the Pocket Projector isn’t any old pico projector. It comes with in-built speakers, which while a little brassy, are a lot louder than most phones’ speakers. It also comes packing a battery, which will last, as the Lenovo spokesman succinctly put it, “long enough to watch a movie, unless you’re a big fan of Lord of the Rings.”

Still, most pico projectors that cost less than $250/£200 require constant USB power and don’t come with speakers or Wi-Fi, so the Lenovo Pocket Projector could steal the show, especially when paired with a hefty power-bank.

We watched the Avengers trailer and while the image quality was a far cry from a 1080p Blu-ray on a decent TV it was perfectly acceptable, especially with the lights down. It would be as at ease with the odd ad-hoc Powerpoint presentation as it would with watching a match with friends or throwing some cool effects on the ceiling at a party.

Aside from the inclusion of Dolby Atmos to its new range of tablets and phones, Lenovo’s Pocket Projector was perhaps its most surprising and interesting announcement at MWC.

We like its design, performance and price, but the final product needs to be well made – much better than the prototype we saw. We’re looking forward to testing the fininshed article to see if it can live up to its promise.