The Lenovo Legion Y740 is the latest high-end gaming laptop from Lenovo, and the first models will be going on sale in February. Until then, here’s what we know about prices, release dates, specs, and our overall first impressions.

There’s no word on what the other entry-level specs are – we can assume that this money would get you an Intel Core i5 CPU, 8GB of RAM, Nvidia RTX 2060 with a 128GB SSD and 1TB HDD.

Lenovo says that both the 15-inch and 17-inch Legion Y740s will be going on sale in February, though there’s no firmer release window than this yet. 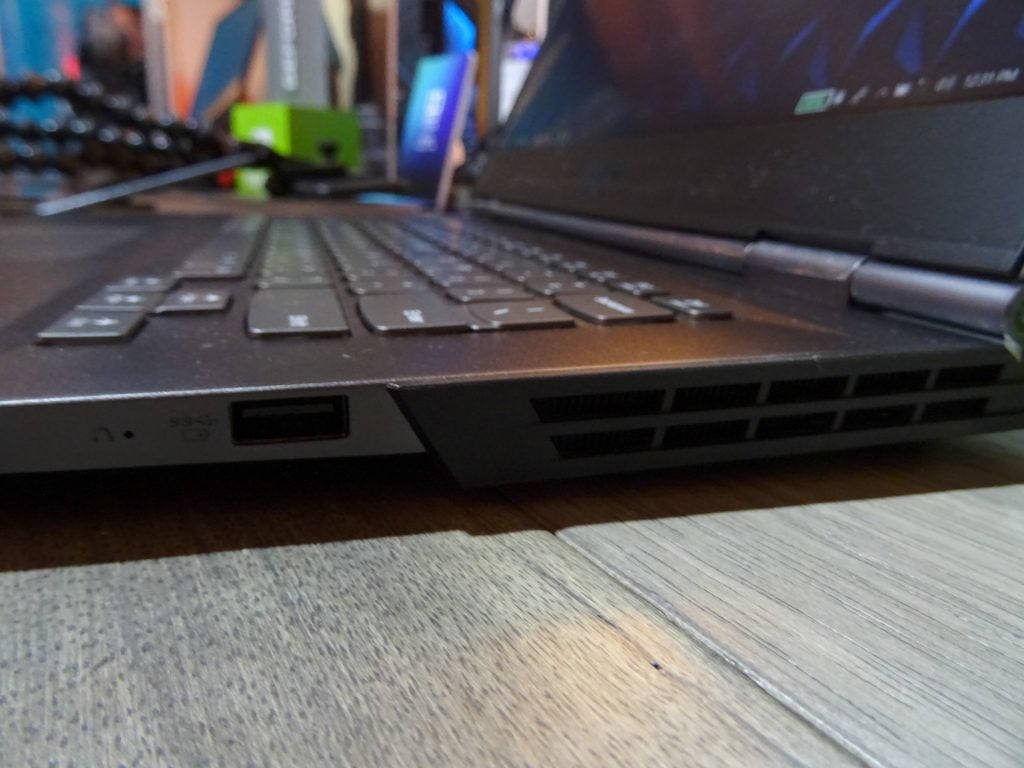 Laptop makers in 2019 all seem to be fighting the same quandary of ‘how can we make a gaming laptop not look like a gaming laptop?’, and the Legion Y740 is Lenovo’s answer – it’s a slick, squat, off-black laptop, or ‘Iron Grey’, in Lenovo’s words, that is fairly unassuming at a first glance.

That said, it retains the boxy shape and right angles you’d see on other gaming laptops – like many from Asus’s ROG Strix range, for example – and when you open up the screen and toggle those RGB lights, and it’s immediately obvious that yes, this is a gaming laptop.

Rather than try to disguise what it is, Lenovo’s elected to make some practical changes with the Legion Y740, like locating the connectivity and display ports at the back of the machine, for example. This means there will be less of a serpent’s nest of cables falling out of the sides, so if you’re going to connect a wired mouse, you’ll immediately have a bit more desktop room.

The positions of these ports are helpfully indicated by light up logos so you can easily pop in the right cable without having to flip the Lenovo Legion Y740 over to see where everything is. It’s a nice feature that Lenovo also happens to share with, which has done something similar with its HP Omen X Emperium 65 monster monitor – great minds clearly think alike. 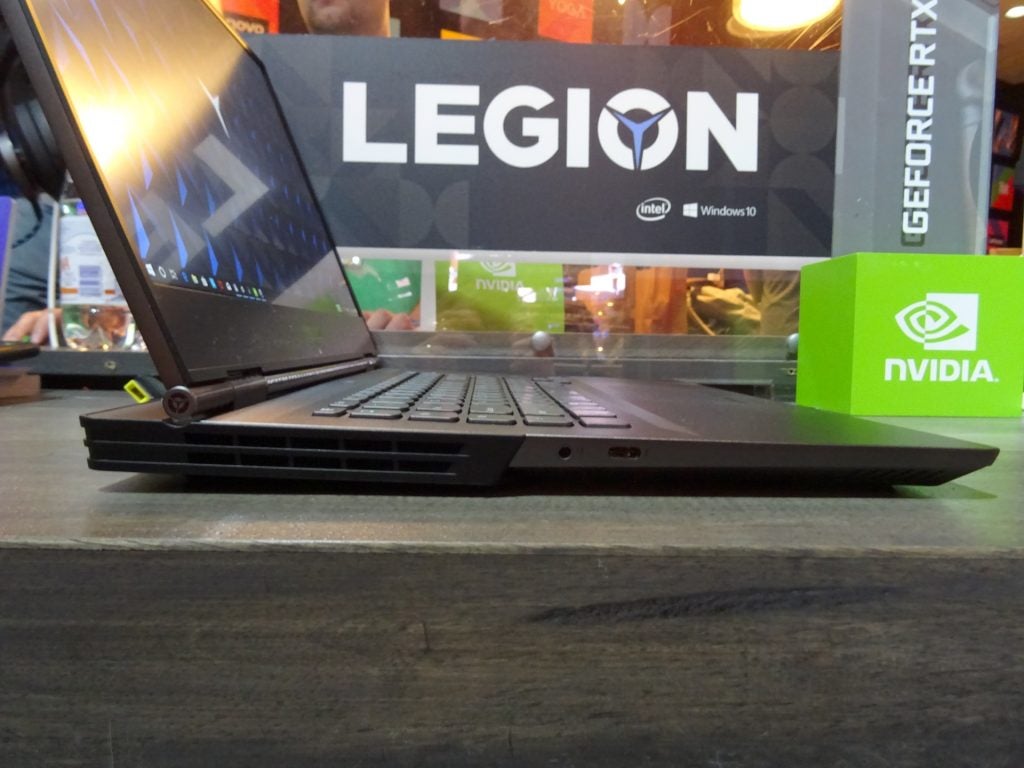 …and on the left-hand side you get just a 3.5mm audio jack and a Thunderbolt 3-supporting Type-C USB port. Where are all the ports?!

The keyboard supports n-key rollover technology, which, for those of you not up on your your PC gaming lexicon, basically means that the input of each key on the board is independently scanned by the hardware, so if you were to push a bunch of keys at once, every keystroke would be registered – some keyboards don’t do this, which means in tense multiplayer gaming situations, where you’re trying to swiftly execute as many keyboard shortcuts as possible and you make a big sweaty mess of it, not every keypress you make will be picked up.

This is called ‘ghosting’, which isn’t the same thing as you pretending to ignore any awkward dates you bump into in the future. With the Legion Y740’s keyboard, Lenovo’s promising ‘100% anti ghosting’. 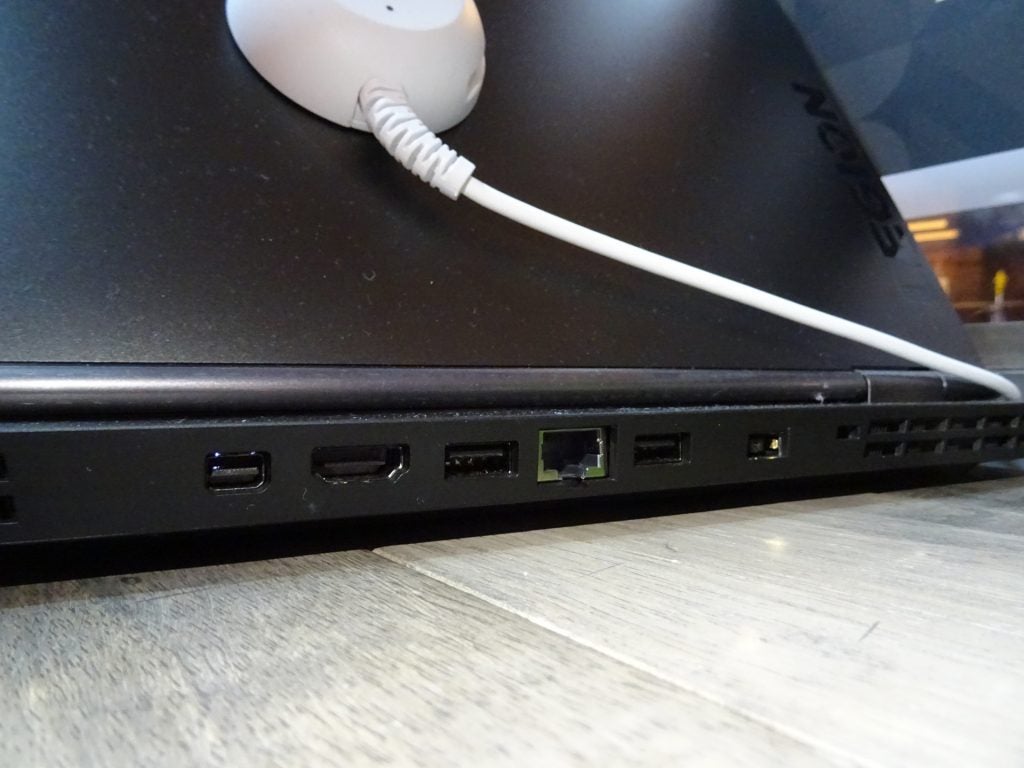 Ah, there they are. From L-R: DisplayPort, HDMI, USB-A, Ethernet, another USB-A, USB-C, Kensington lock slot.

While the Legion Y740 isn’t quite as luggable as other ‘light’ gaming laptops I got to fondle at CES, it’s not super-heavy and I feel that dragging this around with you all day wouldn’t be the biggest burden. Maybe it’s the design, the fact that some of the ports have been moved around to the back, and the fact that you get a combination SSD and HDD, but I get the feeling that this will be better suited to purely gaming than gaming+light creative work that some manufacturers seem to be pitching their new ‘gaming’ laptops at. The keyboard felt nicely spaced and easy to type on, and the spec sheet boasts that the display covers 72% of the NTSC colour space, which is roughly equivalent to 100% of the sRGB gamut, so maybe it will be a solid creative performer too. While I wasn’t able to see how the anti-ghosting claims held up, found that the keyboard very easy to get acquainted with and comfortable to type on.