What is the Lenovo Ideapad 510S?

The Lenovo 510S is a highly affordable, reasonably thin and light laptop that’s available from just £450. With a smart, partially metal design and plenty of options for some powerful hardware, it’s a clear step up from the more entry-level alternatives. Potentially, it’s the ideal choice for those seeking a good all-round laptop but who don’t require gaming performance or a DVD drive.

The Lenovo 500 series is available in 13in, 14in and 15in versions that are somewhat confusingly numbered 500S, 510S and 500 respectively. What’s more, it’s the 510S that’s the cheapest entry-level option, with prices of the other two models starting at over £600. Also, S stands for ‘Slim’. Confused? So were we.

At this price it’s somewhat surprising to see that the 510S is a well-made machine with some premium details such as a metal keyboard and screen surround and a backlit keyboard. The outside, meanwhile, is made of tough, pearlescent white plastic. It’s also available in a silver or a red exterior with black interior. 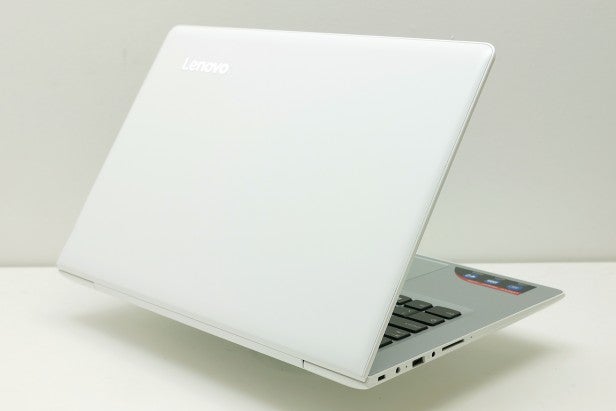 The overall vibe is one of minimalism, with little adorning the inside or outside, save the shiny, embossed Lenovo logo.

This is a fairly thin and light laptop but, at 19.3mm thick and weighing from 1.7kg, it’s still a clear step up in bulk over your classic Ultrabook – the MacBook Air or Asus Zenbook, for example.

However, with that extra size comes extra features. In terms of connections you get three USB 3.0 ports, an SD card reader, a headphone jack as well as a full-size HDMI output and an Ethernet network port. The latter two are particularly useful additions that mean you won’t need any adapters or dongles to get this machine hooked up to a network or monitor/projector – unlike most Ultrabooks.

Inside you’ll find a fairly typical selection of features for a thin and light laptop. Depending on how much you spend you’ll get an Intel Core i3-6100U, Core i5-6267U or Core i7-6567U with either a 128GB or 256GB Sata III SSD. The latter is one area where this laptop will clearly trail its more premium sibling the 710S, which includes a faster PCI Express-based SSD.

Alongside those processors sit a range of Intel integrated graphics, with those same chips including Intel Graphics HD 520 or 550 graphics processors. That may not sound like much of a difference, but the 550 chip includes a small amount of dedicated graphics RAM that makes it surprisingly capable and thus opens up the potential for 3D gaming at low settings. That’s not the case with the Ideapad 510S on here, however.

Lenovo also states on its website that there’s a version of this laptop with AMD graphics, but no such options are on sale at the time of writing. 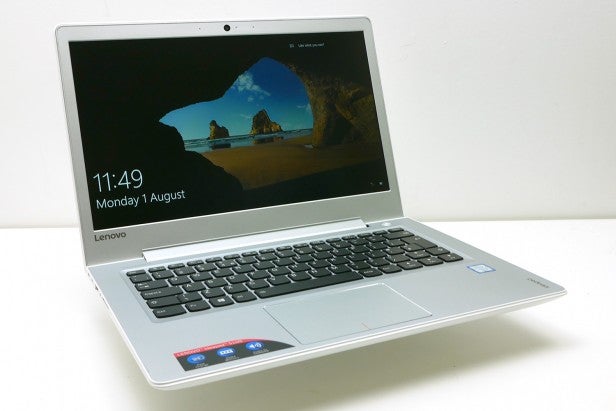 The 510S benefits from an excellent keyboard that features large, well-spaced keys that are arranged in an ideal fashion – there’s little in the way of bunched up or squashed keys as seen on some laptops. The “” and “#” keys are slightly wedged in, but not to the extent that it affected my ability to type at speed.

Touch-typists will appreciate the nicely defined key action, making it easy to determine when a key is pressed. Plus, the keyboard is backlit, so it’s simple to type accurately even in dark environments. The backlight can be turned off completely if you prefer – it will save a smidge of battery life – and there are two brightness levels.

The touchpad isn’t quite so impressive, but still largely gets the job done. It’s a decent size and has accurate tracking alongside a click-anywhere, single-button action. However, the pad surface is metal rather than the etched glass of the best I’ve used, and as a result it just isn’t quite as smooth and effortless to glide across.

For a machine costing just £450, it’s great to see the screen on the 80TK002VUK version of the 510S uses IPS LCD technology. This ensures it benefits from far better viewing angles than cheaper TN panels, as well as more accurate colours and better black levels.

This is evident the moment you fire up the machine: the screen looks crisp and colourful, with a real depth to blacks. It’s also good to see a matte anti-glare coating in use to keep reflections at bay.

With a resolution of 1,920 x 1,080 on a relatively small 14in screen, Lenovo has chosen to ship the 510S with the Windows scaling option set to 150% so that text and icons appear larger and more readable. However, you could just about get away with running it at native resolution if you have sharp eyesight – and if you do then it will mean that you end up with far more desktop space.

When it comes to audio, the 510S offers a reasonable level of power and clarity from its speakers. They certainly aren’t setting new records, but are a step up from the tinniest, weakest ones included on truly cheap laptops.

In general use this is a reasonably nippy machine, despite it being the cheapest option that we’re reviewing. It boots and loads programs quickly and has no problems with general desktop work. This is in contrast to machines that use Intel’s Core M chips, which can be overwhelmed even by fairly modest workloads. The upshot of a Core M, though, is ridiculously low power consumption and massively elevated battery life as a result. 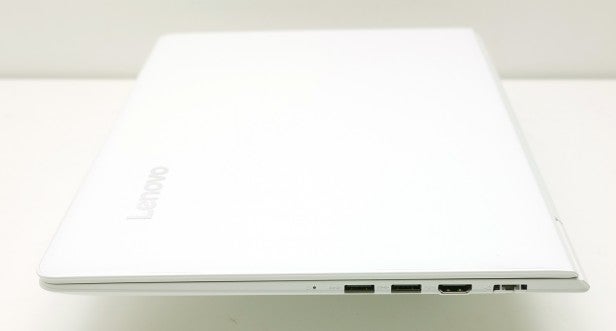 Slightly muddying the performance waters is the SSD, since it actually has faster write performance than that of the 710S and as a result will be slightly quicker when transferring files to the laptop. However, it’s read performance that matters for a general snappy feel, and while the 510S scores a perfectly solid 499MB/sec, the 710S hits 1,290MB/sec.

128GB isn’t huge, and with a few programs and files on board you won’t have much left. This is a problem if you don’t store your files in the cloud. If you’ve already embraced the likes of Google Drive of OneDrive, then it shouldn’t be such an issue.

The faster CPU of that machine contributes to the overall snappier experience, and is reflected in the PCMark 8 score of 2,127 for the 510S and 2,865 for the 710S.

Further cementing the point about this particular CPU option being a more entry-level choice is the 3DMark benchmark that indicates 3D gaming performance. In the Ice Storm test, the 510S scored 287 points while the 710S scored 1,319.

Nonetheless, the picture is quite clear – this is a perfectly capable machine for day-to-day use, and the options are present if you want to go for the more powerful CPU. 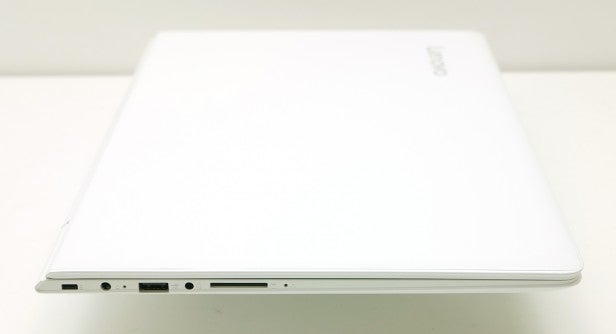 What’s more, this machine seriously impresses when it comes to battery life. The combination of fairly low-power components and a large chassis result in a laptop that lasted for more than 10 hours in our Powermark test.

We set brightness to 40% and ran a loop of 10 minutes’ browsing the web and 5 minutes of watching video and it managed 10hrs 12mins. That’s well up there with the longest-lasting laptops you can buy, and outperforms plenty of other thin and light devices. The 710S managed 8hrs 37mins in the same test.

It’s likely that time will drop slightly with the more powerful CPU versions of this laptop, but not by much. 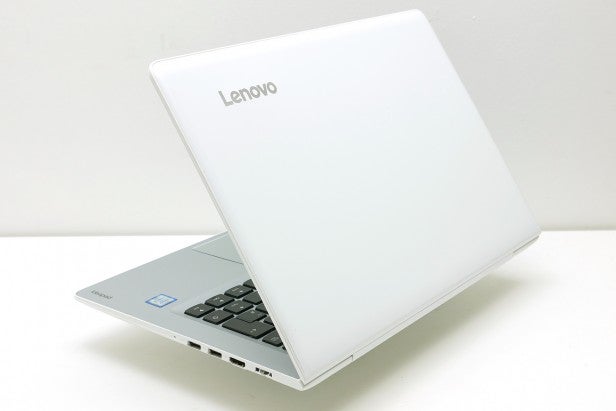 Should I buy the Lenovo Ideapd 510S?

This is a great laptop for those wanting a machine that’s reasonably thin and light but want a slightly larger screen and don’t want to compromise on key features such as a wired network connection and full-size HDMI port.

At £450, this entry-level model is  an excellent choice for those just wanting enough performance for general day-to-day computing, especially since it doesn’t compromise on the screen, keyboard, trackpad quality or battery life.

If you think £450 is a lot for a Core i3-powered laptop, bear in mind that many of the other models you’ll find online do not have SSDs and instead have 1TB hard disks. These will feel substantially slower in day-to-day use so if you have the extra cash for a laptop with an SSD, it’s worth it.

A great all-rounder of a laptop that sits in an ideal middle-ground between cheaper larger models and more premium thin and light Ultrabooks.