As designers of the original PC platform, IBM must be able to look at the market today and be proud of what it has managed to spark off. There are more IBM PC compatibles out there than it originally thought possible.


Most impressive though, is that despite allowing everyone to use its standard, IBM hasn’t been pushed out of the market by hyper-competitive manufacturers. Maybe Apple ought to take a leaf out IBM’s book and release MacOS for the PC.


Despite this achievement, IBM sold its PC division to Lenovo – and so far it’s done a great job of maintaining the brand IBM spent so long building up. Although Lenovo still produces its own line of machines, it is also trading under the IBM name, maintaining the “Think” brand. This is in fact the first ThinkCentre machine we’ve ever looked at, and I think it looks great. 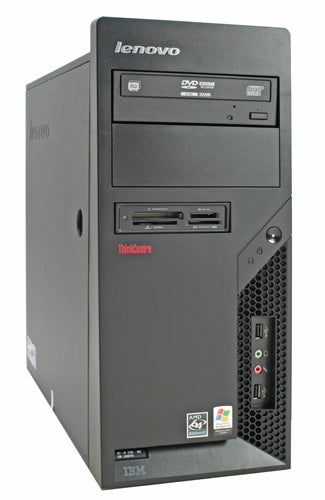 The chassis itself is a cheap steel affair. It’s flimsy, with sharp edges, but does a perfectly adequate job of housing the machine. The type of machine this is, you’re not going to be poking around inside every ten minutes.


What I do like, is the plastic shrouding on the outside. It has a really bold design, that sticks true to IBM’s style. The edges are defined, instead of rounded off, and the inset bezel on one corner gives it a modern look, while somehow looking like it belongs om the set of a 1980’s science fiction film. And that’s not a bad thing, we love a bit of retro in this office.


The exclusion of a floppy drive, and the inclusion of a multi-format card reader, is a sign of the times and useful for anyone with a digital camera (i.e. 99 per cent of the population). 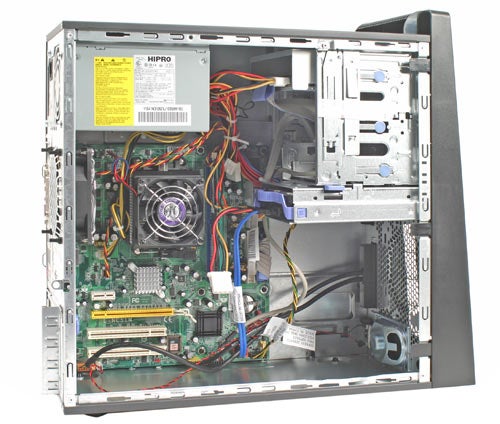 The case is quite small, being a MicroATX design. Strangely, the front panel is larger than the case itself, in a wedge shape. This looks a little out of place – like it’s just been strapped on to the case. When looking from the front however, it looks just dandy.


On the inside, despite its small size, things are hardly cramped. There is a 16x Multi-Format DVD Burner already fitted, but room for a second 5.25in drive should you want another one for direct copying. There isn’t any room for another hard drive, despite the spare SATA port and IDE channel, but this could always be fitted in to the 5.25in bay, or even via USB.


One downside to almost all MicroATX motherboards is that there are only two DIMM slots. This comes installed with a single 533MHz 512MB module of DDR2 memory. That means no dual-channel memory, but it does mean adding another module would be a quick and easy upgrade to improve performance.


The motherboard is an OEM MSI model, based on the nForce chipset, using the onboard GeForce 6100 for graphics. This gives a single D-SUB output, but no DVI. There is an x16 PCI Express slot should you need better gaming performance or more outputs.


The cooler is exceptionally quiet, and that is in the “standard” setting in the BIOS. There is also an option for quieter operation, and another for slightly better cooling. This is complemented by a rear 80mm fan, which is expelling hot air out of the system.


Underneath this cooler is an AM2 socket with an Athlon 64 X2 3800+ processor. This is a dual-core 2GHz processor, with 1MB of Level 2 cache. Even with the price cuts AMD has made, I’m still surprised to see this in such a cheap machine. 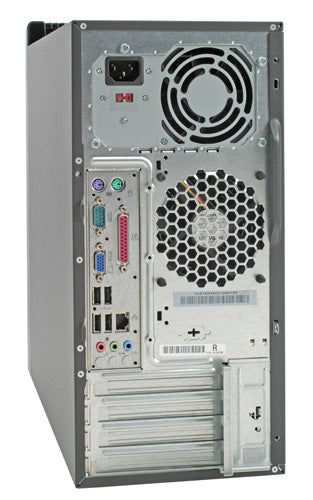 On the back of the machine, you can really see how basic this machine is. Despite its simple nature, its specifications are that of a machine you would previously have paid a lot of money for – Gigabit Ethernet, 5.1 audio, four USB 2.0 ports, PS/2 ports and a parallel and serial port. Should you need anything more, there are two PCI slots and an x1 PCI-E slot.


On the front of the case, there are two USB 2.0 ports, headphone output and microphone input. One notable exception is that of FireWire. With an increasing number of people video editing, this will go noticed in many households. An add-on card is only a few pounds, but not everyone is confident enough to fit these and it wouldn’t have been hard to have one installed already.


The hard drive is 160GB, which is a fair old size that should be enough for a sizable MP3 collection or a lot of documents. 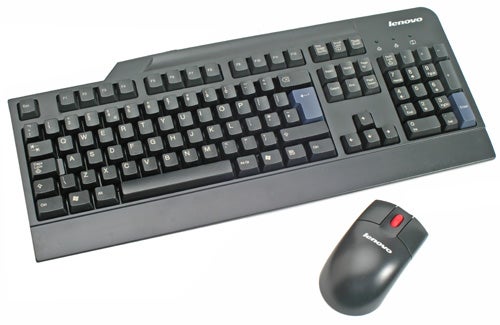 Supplied is a keyboard and mouse. Usually, these are whatever can be found cheapest on the Taiwanese stalls. However, the keyboard supplied with this machine is quite frankly one of the best I’ve ever used. Our photographer, Martin, liked it so much, that after doing the photos he went ahead and ordered one.


The mouse wasn’t as much of a hit, as it was only a ball mouse. These are prone to breaking down very quickly.


I tested this machine using our SpodeMark 2D testing suite, as well as SYSMark 2004SE. I decided to compare to the eMachines E4056 that I reviewed earlier in the week. This is a cheaper unit, with only a single core processor.


The difference between the two computers, was astonishing. Having the second core, and the superior Athlon 64 architecture (over NetBurst at any rate), performance was superb. In single tasks, such as Photoshop Elements, it knocked off some 100 seconds in the time taken, and over 50 per cent improvement in time taken to perform file compression tasks.


The real performance benefits where shown when running multiple applications – which is where you are more likely to want dual processors. In these situations, times were literally cut in half. SYSMark showed a similar trend.


This is a great looking machine with good specifications. At a shade over £400, it’s amazing value for money and the benefits are clear over the cheaper single core alternatives. 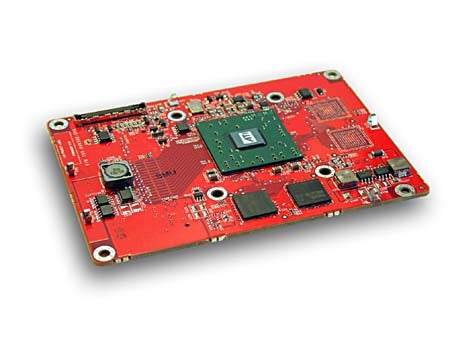