What is the Leica TL2?

The Leica TL2 is a 24MP mirrorless camera with a one-piece aluminium body and very smartphone-like touchscreen control. It has a gorgeous tactile design with one of the best touch interfaces you’ll find on any camera. Sadly its stratospheric price means that few photographers will ever get to experience its unique charms. 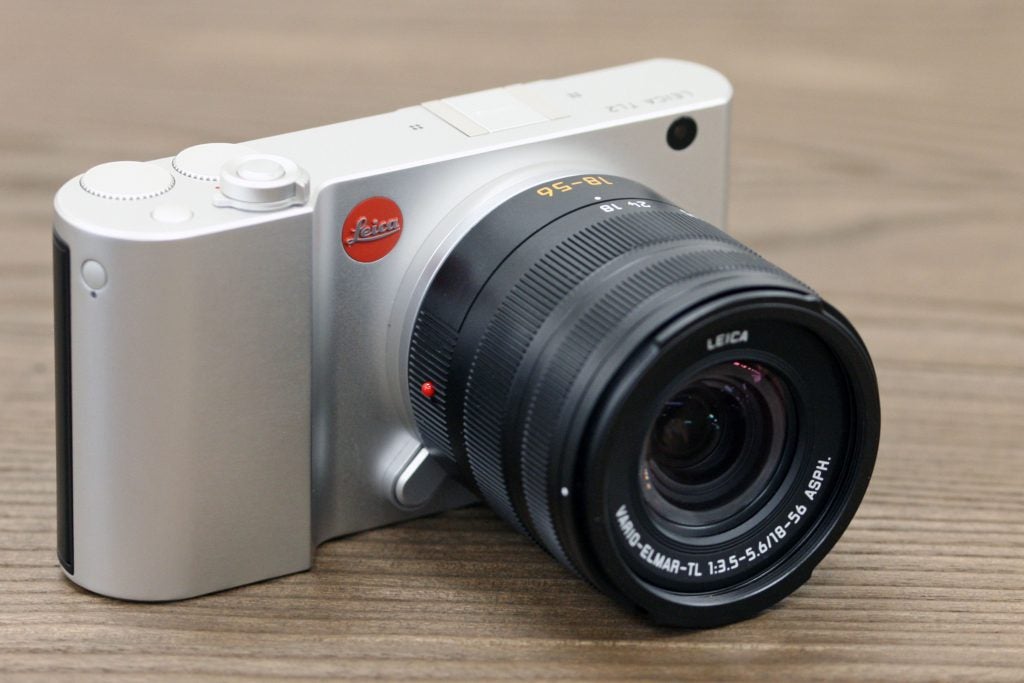 Mention Leica and I’ll bet most photographers immediately think of its exquisitely crafted, old-fashioned M-series rangefinder cameras which have barely changed since the days of film. But its T-series mirrorless models are about as far removed from that as it’s possible to imagine. They have sleek one-piece bodies painstakingly crafted from a single block of aluminium, with just a few well-chosen physical controls complemented by a large touchscreen that covers most of the camera’s back. They feel like the kind of cameras Apple might make – stylish, minimalist, but still highly functional.

The Leica TL2 is an update of the TL that was introduced just eight months ago, which itself was a relatively minor revision of the original Leica T from 2014. This latest model uses a very similar design but adds an array of improvements, with the most obvious being a 24-million-pixel sensor (up from 16MP). One feature that’s been dropped is the TL’s pop-up flash, but I don’t think many users will miss it.

Far more problematic, given the camera’s size and price, is the continued lack of a built-in electronic viewfinder. You can use an accessory unit, the Leica Visoflex, on the hot shoe, but that adds another £390 to the price. 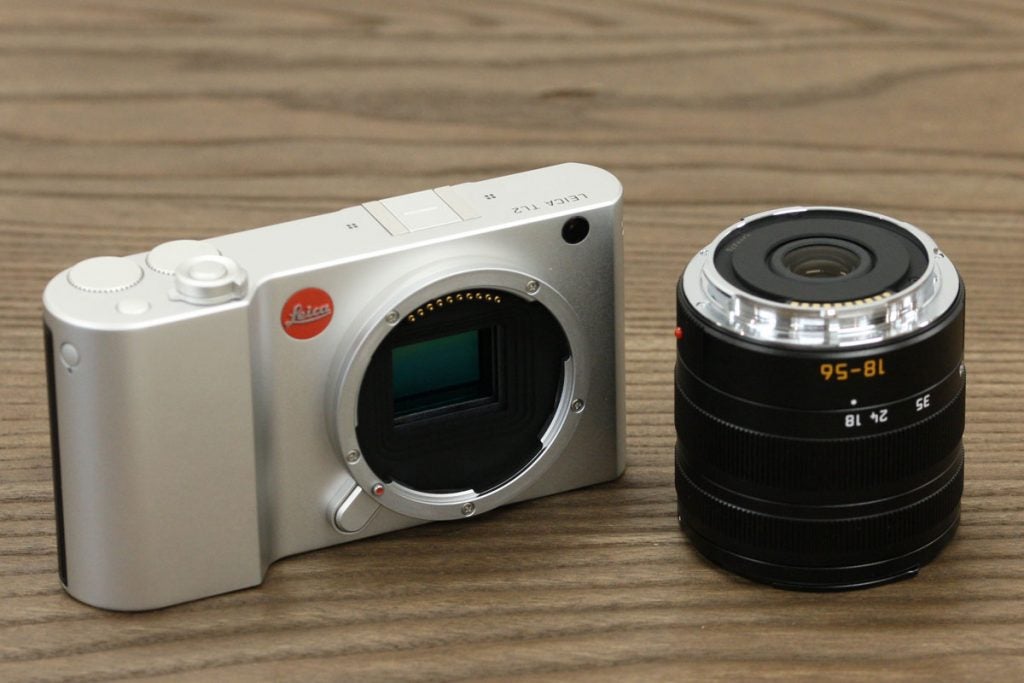 The TL2 is compatible with both APS-C TL lenses and full-frame SL lenses.

With its 24-million-pixel sensor, the Leica TL2 moves into line with other current APS-C mirrorless models in terms of resolution. Coupled with the Maestro II processor, it provides a sensitivity range of ISO 100-50,000, and the TL2 includes a well-considered Auto ISO mode that aims to keep shutter speeds high to eliminate blurring from camera shake. This is particularly important, as neither the camera nor its dedicated TL lenses include image stabilisation, which in this day and age is a very strange omission indeed.

The mechanical shutter provides a range of 30sec to 1/4000sec, with the new silent fully-electronic shutter extending this to 1/40,000sec. It also allows faster continuous shooting, at 20 frames per second compared to 7 fps with the mechanical shutter, with a useful 29-frame buffer even when shooting raw. But it seems the only way to select the electronic shutter is to manually set a speed faster then 1/4000sec, so unlike with other cameras you can’t easily use it in situations that require the camera to make no noise but require slower speeds – hopefully Leica will fix this with a future firmware update. Thankfully the mechanical shutter is pretty quiet anyway. 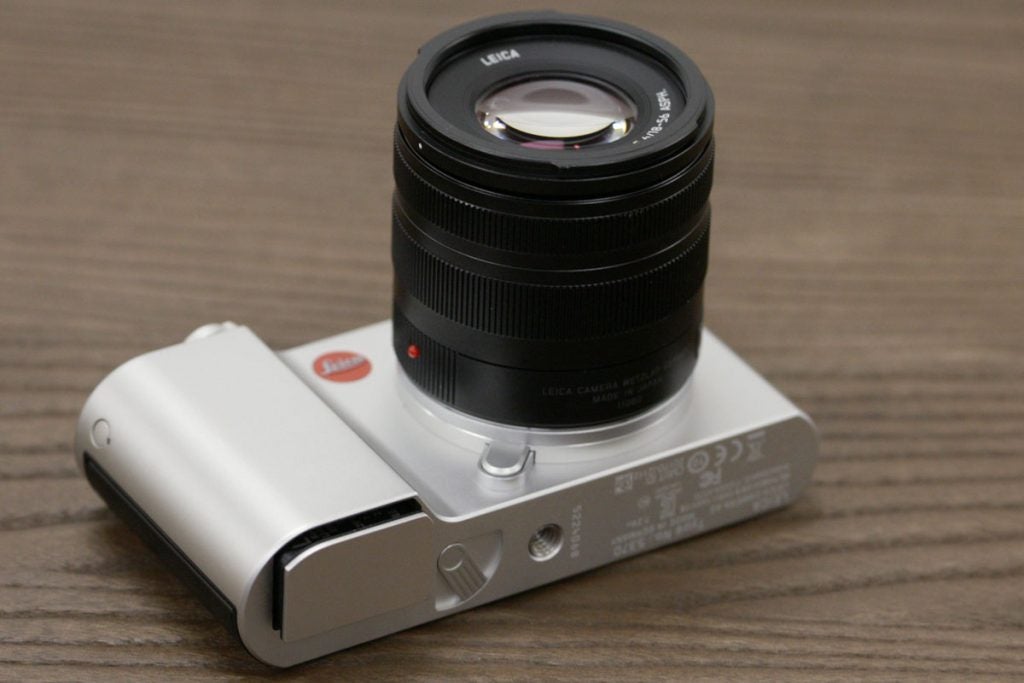 Unusually, the TL2 includes internal memory for recording files, and at 32GB it’s a very decent amount – enough to record around 400 files in JPEG + DNG raw format. Some users may even decide they don’t need to buy an SD card at all. The camera can copy the images you’ve taken from the SD to the internal memory (or vice versa), which can be used to back up your pictures after shooting, or get images off the camera without having to plug it into a computer using its USB-C socket. Unfortunately though you can’t record files to both the SD card and internal memory simultaneously.

For power Leica has used the same BP-DC13 battery as in the older T-series models, which cleverly slots into a compartment in the base of the camera with no need for a conventional battery door, as you can see in the picture above. However where this previously gave 400 shots per charge, in the TL2 it’s rated for just 250 based on CIPA standard testing, which is rather disappointing. In practical use it didn’t seem to last very long, either. 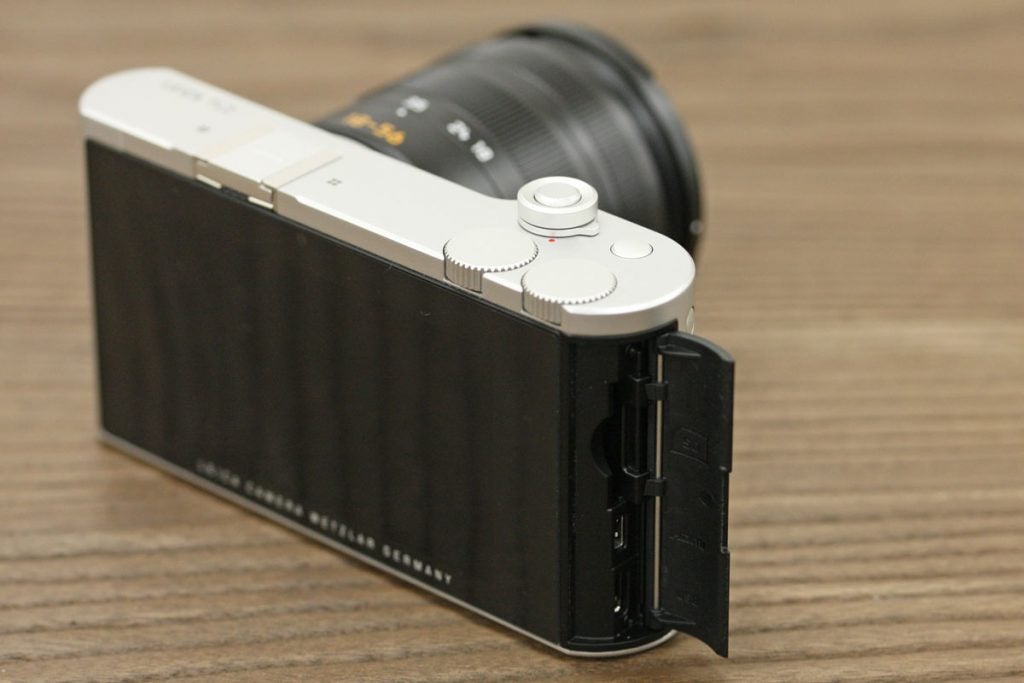 Leica has included 4K video recording at 3840 x 2160 resolution and 30fps, alongside Full HD (1920 x 1080) at 60fps. There’s also a 120fps slow-motion mode, and electronic image stabilisation. But there’s no facility to attach an external microphone, so sound is recorded purely through the built-in stereo microphones either side of the camera’s hot shoe. However there’s an HDMI output for connecting the camera to a TV, hidden behind a flap on the side along with a USB-C connector and the SD card slot.

Wi-Fi is built-in for connecting the camera to a smartphone or tablet, using the free Leica TL app for Android and iOS. Pairing devices is very straightforward, and the app is just as elegantly designed as the camera itself. You get remote control of the camera with a live view feed and the ability to change exposure parameters and white balance remotely. In a particularly neat touch, turning your phone to landscape format gives an uncluttered full-screen view, with only shutter and video buttons displayed. Switch to playback mode and it’s easy to pull your favourite images across to your phone for sharing. Once you get beyond the core spec, the TL2 offers very little in the way of extras. For instance you don’t get any kind of dynamic range expansion tools for shooting JPEGs, in-camera raw conversion, an intervalometer, or even built-in electronic levels. It’s also worth noting that Leica only makes a small range of matched TL lenses, and they’re eye-wateringly expensive. It’s possible to use Leica’s famous M-mount rangefinder lenses, but you’ll need to buy the £300 M-adapter L to do so most effectively.

When it comes to design, the Leica TL2 follows on from its predecessors in being quite unlike anything else on the market. Other cameras use a metal chassis onto which the internal components are bolted – sensor, shutter, processor board – with a cosmetic skin then placed over the top. However the TL2 has a unibody design crafted from a solid block of magnesium, into which those components are attached. This brings a rare sense of quality and solidity when you pick it up. But it also means the camera is quite large and heavy, measuring 134 x 69 x 33mm and weighing in at 399g, before you even add a lens. It’s larger than comparable mirrorless models that don’t have viewfinders such as the Olympus PEN E-PL8 and Canon EOS M6, and broadly similar in size to the Sony Alpha 6000 and Panasonic Lumix DMC-GX80 which have built-in EVFs. 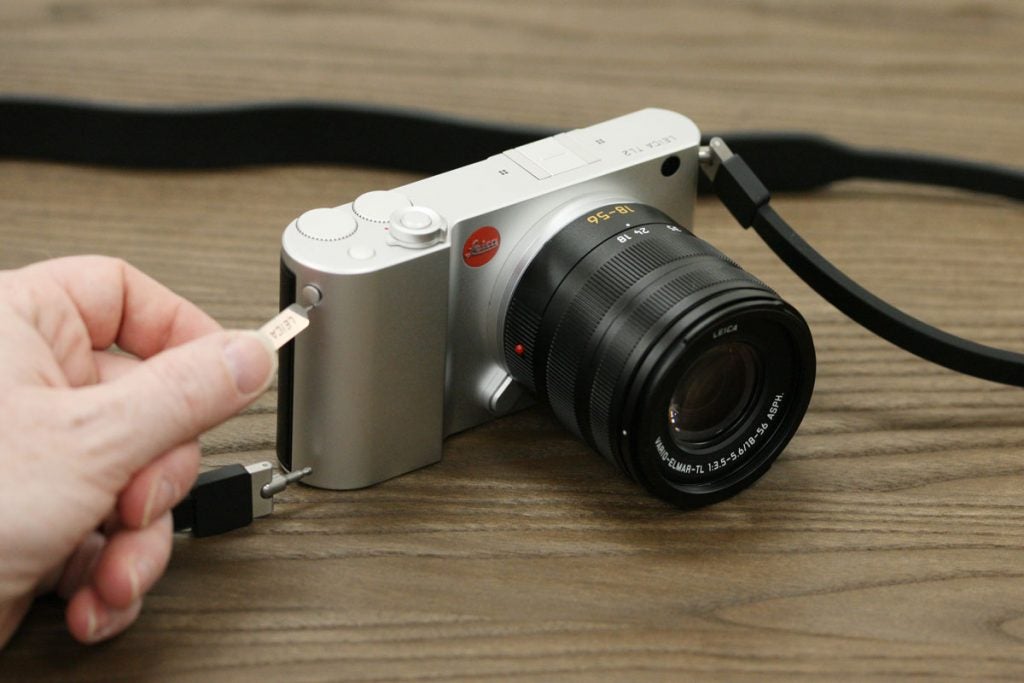 The shallow but wide handgrip gives a surprisingly secure hold, despite the body’s silky smooth finish. However if you’d like the added security of a strap, in a triumph of style over substance Leica has used propriety plug-in connectors, and nothing else will fit. Attach the supplied silicone strap and you’ll find it makes the camera less comfortable to grasp, with the connector digging in between your forefinger and middle finger.

The camera’s unconventional design extends to its back, which has no buttons or dials at all. Instead there’s just a large touchscreen that’s used to change almost every setting. Unlike on other cameras, Leica hasn’t added touch-sensitivity as an afterthought by adapting a pre-existing interface designed for button-driven operation; instead it’s built a new interface from the ground up, with large well-spaced buttons and a generally consistent design. You get a fully user-customisable quick menu for your most-used settings, while the main camera menu is logically organised into a set of nine sub-menus. It’s all pretty intuitive, and crucially the touchscreen is generally very responsive to inputs and quick to learn. 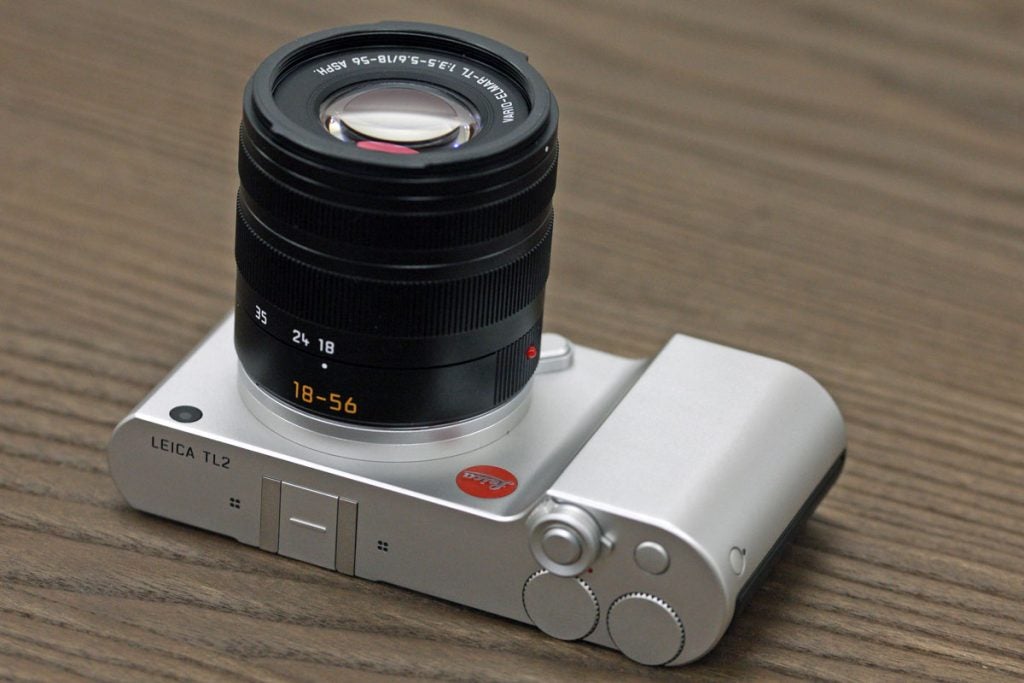 There are still a few physical controls, of course, which are all located on the top-plate, aside from the lens release button on the front. The power switch encircles the conventional two-stage shutter button; as usual a half-press activates autofocus, while fully pressing the button takes a picture. Beside it is the video record button, but in a move that should please purist photographers, this can be re-assigned to either enter playback mode, or switch between the electronic viewfinder and the LCD screen instead.

Twin electronic dials are used to change the main exposure settings while you’re shooting. In manual-exposure mode, one changes shutter speed and the other, aperture. In the other modes the right dial changes the primary exposure parameter, while the left dial can be quickly switched between a range of options via an onscreen touch button, most usefully exposure compensation and ISO. 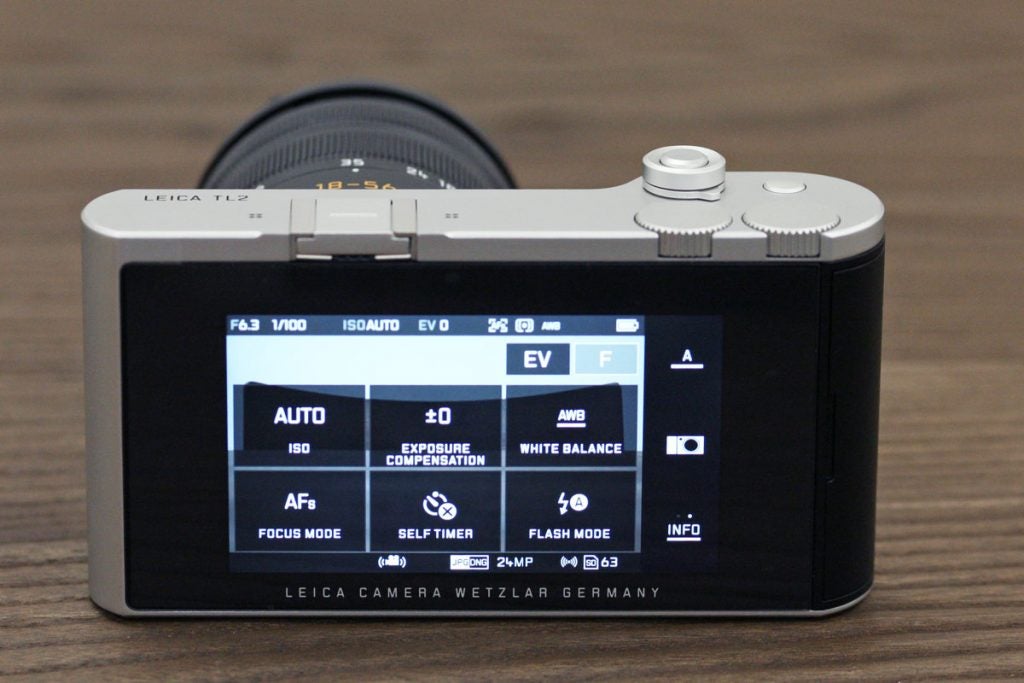 The left-side dial can be assigned to various functions

The touchscreen interface, though, is what makes the TL2 quite unlike any other camera around. On the whole it’s very smartphone-like, and I mean that as a compliment, as it makes a complex device quick and easy to use. Leica has added a few ideas all of its own: swiping up or down alternates between shooting and playback modes, while swiping left or right switches between previewing 3:2 stills and 16:9 video. Once learned, these gestures quickly become second nature.

Half-pressing the shutter button at any time brings you back to the stills shooting screen. Here three touch buttons placed to the right of the live view display are used to select the exposure mode, toggle through screen information displays (including a grid display and live histogram), and access the camera’s user-customisable quick menu. From there, using an onscreen menu you can access the main menu, which is now logically organised into a set of nine sub-menus covering different operational aspects. Playback is very smartphone-like indeed, with left or right swipes to browse image and pinch to zoom, while double-tapping the screen allows you to quickly zoom right in to check focus. 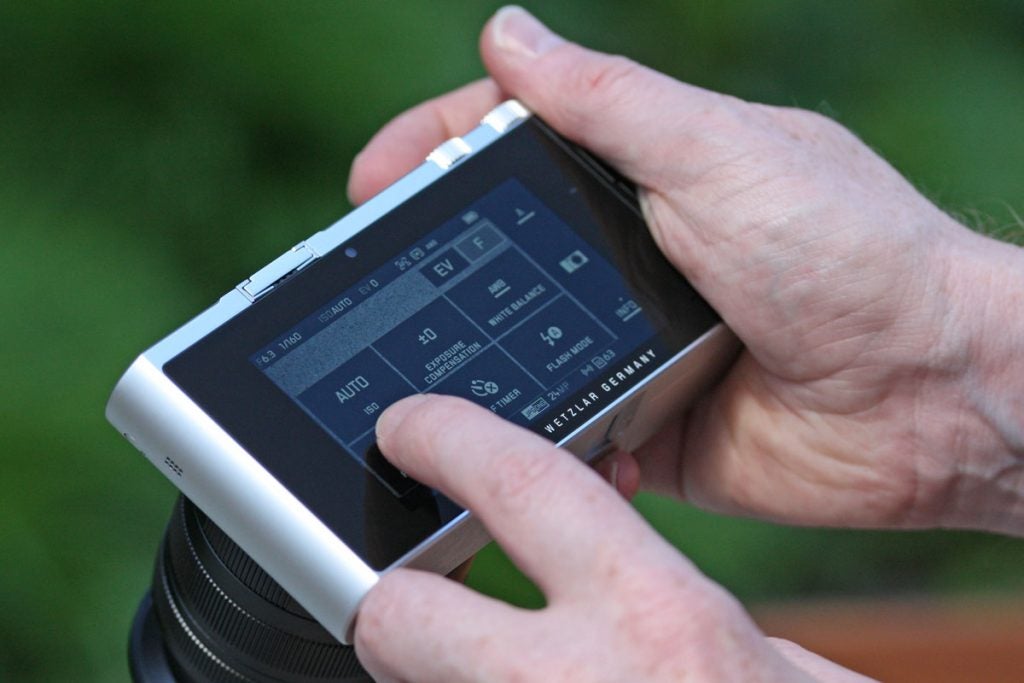 It’s difficult to overstate just how good this touch interface is, both for shooting and playback. Other manufacturers such as Canon and Panasonic have done a great job of adapting their existing interfaces to integrate touch operation, but Leica’s is simply a cut above in terms of both design and usability, and surely a pointer towards how cameras will work in future. However its near-total reliance on touch operation does mean the TL2 is unlikely to be the best camera for shooting outdoors in winter while wearing gloves.