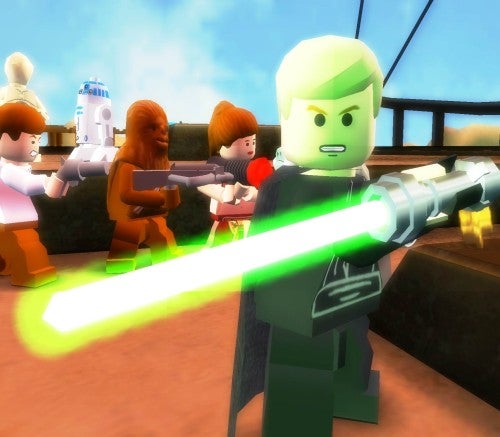 OK, so you’re a Star Wars fan with sixty-odd quid burning a whole in your pocket. You bought the original films on VHS, then the THX special editions, and more recently the DVD special editions. And now you’re considering shelling out on the new DVDs just so you can once again enjoy the ‘bonus’ original theatrical releases, even if it with a plain old Dolby Stereo soundtrack and a letterboxed 4:3 picture.


Here’s a tip: don’t. There’s a better way to get your original Star Wars trilogy fix. It won’t cost you quite as much cash, you won’t be paying for films you’ve bought three times already, and you won’t be encouraging George Lucas to come out with another ‘OK, here’s the real version’ thirtieth-anniversary set in two years time. It’s called Lego Star Wars II: The Original Trilogy, and while it’s a game that features Darth Vader in the guise of a cute-looking Lego midget, not to mention a stormtrooper who appears to be wearing little more than a helmet and a thong, it arguably captures more of the real spirit of Star Wars than any other Star Wars game since Tie Fighter. 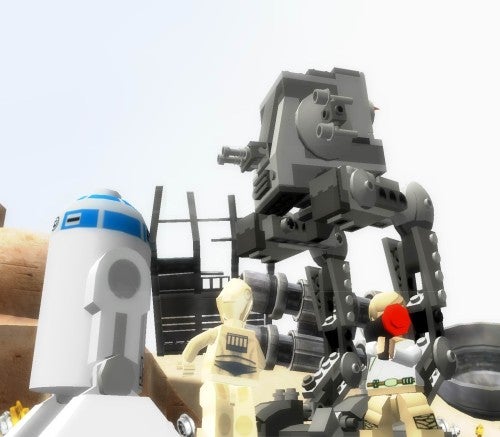 What’s more, it’s a superlative sequel. It helps, of course, that the original Lego Star Wars was a wonderful game – easily the best to be based on the controversial prequels – and that this follow-up follows on along similar lines. At its heart, Lego Star Wars II remains a fairly simple one or two-player platform-shooter, rendered in 3D, but played mostly on a 2D plane. There are occasional missions where you’re piloting a ship, tackling Tie-Fighters and Star-Destroyers, but for the most part you’re running left to right shooting stormtroopers and hopping from platform to platform, while collecting little Lego ‘nubs’ that can be converted to bonus items and characters back at base: in this case the Mos Eisley cantina. Just like the first game, it works because the gameplay is simple to pick up yet always entertaining, and because there’s always considerable charm in seeing much-loved scenes and characters from the movies picked out in Lego form. One day I’ll work out how they get so much character into such simple animated faces, but it’s amazing how easily recognisable each character, from Han Solo to Grand Moff Tarkin to Obi Wan can be. 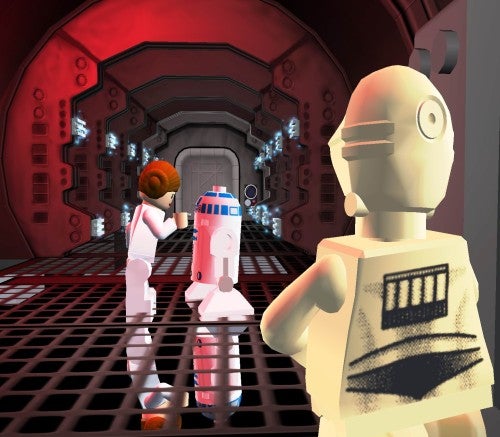 Yet the sequel improves on the original because, in retrospect, that game’s best ideas – its blending of the build-anything flexibility of Lego with the sci-fantasy nostalgia of Star Wars – were only partly realised. Lego Star Wars never really was a test of arcade skill. The fact that you’re characters couldn’t die didn’t just make victory inevitable, it also shifted the emphasis from fast reflexes to the more light-hearted puzzle-solving mechanics. However, these puzzles were mostly fairly simple affairs. With the sequel, things are different, and it’s here that the gameplay has been refined to something near perfection.

For a start, where in the first game exploding and rearranging Lego blocks into different objects was mainly the province of the Jedi characters, here others get a chance, piecing together loose piles of blocks into different configurations, making this a bigger part of the game. Better still, the character-switching dynamic of the original is back, and more central to the gameplay this time around. As before, different Star Wars heroes have different skills. Obi Wan and, later, Luke, can use Jedi powers to move certain objects, while blaster-packing characters like Han and Leia get a grappling hook which, used at specific points, can help them reach new areas of the level. R2D2 and C3PO, meanwhile, are the only ones who can open certain doors, but face restrictions on their movement (particularly in the case of a certain slightly camp gold robot). For much of the game, switching characters and mixing and matching abilities is the only way to go. 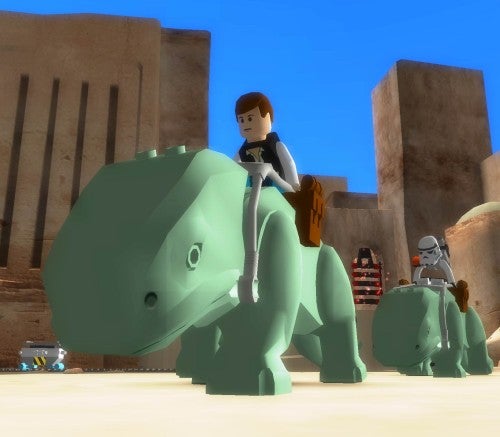 And that’s not all. Lego Star Wars II goes big on block-shifting puzzles, and on puzzles that rely on operating cranes and vehicles, It even has a neat hat-swapping device in several levels, placing a helmet on Han or Luke’s head so they can pose as a stormtrooper and fool security (though noticeably Leia won’t do likewise – she must be precious about her hair).The best thing is that, the more the game goes on, the more it starts to layer these puzzles one on another, so that completing a particular section might involve a mix of Jedi powers, cheap disguises, and moving droids from place to place using cranes. It’s not so much a case of recognising what you have to do, as working out in what order to do it. Even the game’s few boss battles benefit, with Luke and R2 teaming up to give Luke’s dear old dad a shock so that sonny-boy can get some payback for all those missed child-support cheques. 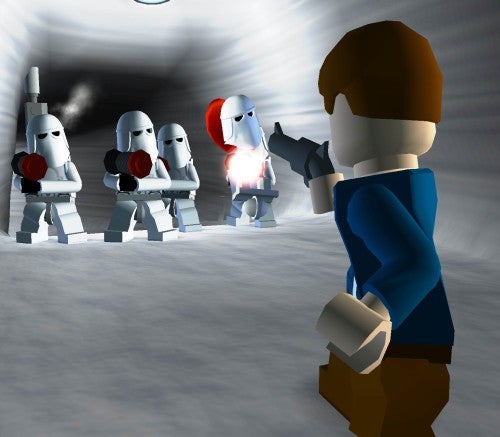 The vehicles themselves are particularly cool. Stomping through Mos Eisley in an AT-ST is one of the early highlights of the game, and if there’s a more surreal sight than Yoda driving a tractor in any game this year, I really will be very surprised indeed.


Of course, while Lego Star Wars II is mainly a case of building on the original’s strengths, it also attempts to sort out what deficiencies there were. Perhaps the biggest failing of Lego Star Wars was a relatively short lifespan, only slightly extended by the lure of numerous unlockable characters and the chance to revisit earlier levels and pick up bonus collectibles. Here, you’re given more reason to keep coming back, with each level sporting secret areas that can only be opened by a bounty hunter or a stormtrooper, plus objects that can only be moved by those wielding the good or the dark side of the force. The levels themselves are longer, and as each chapter has two additional bonus missions to be locked, the overall tally raises from eighteen to twenty-four. This time, it won’t be over in a single weekend. 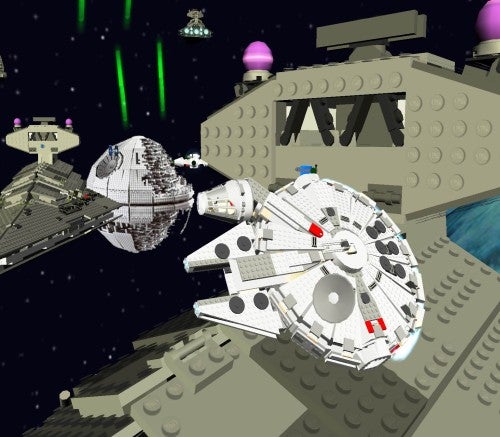 Still some problems remain. The camera, for example, is much improved on that of the original, particularly at zooming in and out to cope with the demands of having two players onscreen, but it also has a nasty habit of not giving the ideal angle when some precision platforming is called for. The only thing that might stop you grinding teeth at certain points is that, in this game, death never stays fatal for long. More seriously, a few levels now drag on too long (the Death Star and the Pit of Sarlacc being particular examples) and there are moments of frustration where seemingly endless numbers of respawning stormtroopers make it hard to play out your solution to a puzzle. Finally, the vehicle based shoot-em-up levels are a bit of a mixed bag. The attack on the Death Star is a blast, the race through the Asteroid base enjoyable, but the battle of Hoth outstays its welcome by a smidgeon. There are only so many Imperial Walkers I want to see go down in one lifetime. 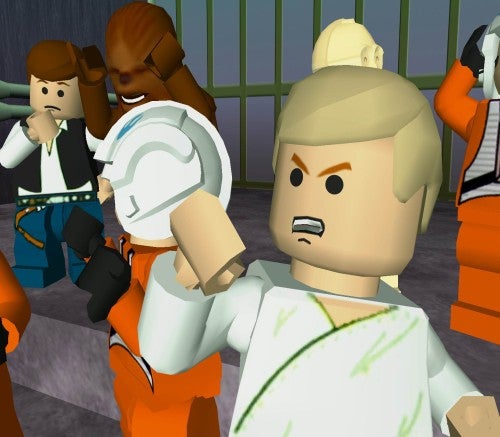 That said, I’d be surprised if any of these niggles worried you for more than a minute, for the simple reason that everything about this game is so much fun. Its affectionate, infectious humour pervades every part of it, from the weird little bonus areas – who would have thought the Death Star had such relaxing spa facilities? – to the way Chewbacca cheerfully rips the Lego arms off stormtroopers, to the wry variations on classic Star Wars moments found in each and every cut-scene. The likes of Darth Vader and Boba Fett don’t seem evil, merely mischievous, while the game does a nice line in winks, grins and sniggers. And trust me, when Gammorean Guard let their hair down, they rock harder than you ever might have expect. 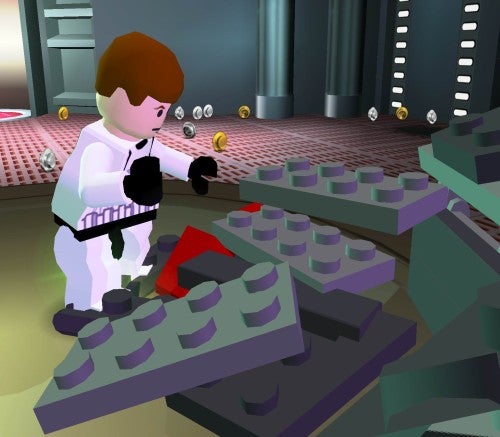 On any home console platform, this is a must-have. There are differences between the PS2 and Xbox 360 version in terms of resolution, enhanced lighting and some wonderful focus-blur effects, but the thing that will keep you coming back for more isn’t the eye candy, but the way the game makes you chuckle on a ludicrously regular basis. Like so many of this year’s best games – We Love Katamari, Animal Crossing, New Super Mario Bros – it’s not so much a video game as a bumper portion of pure, unadulterated fun. Unless you have no love for Star Wars whatsoever, there really is no excuse not to buy it.


Sheer charm made Lego Star Wars a good game, but the sequel has made the hyperspace jump to greatness. Unmissable entertainment from a galaxy far, far away. 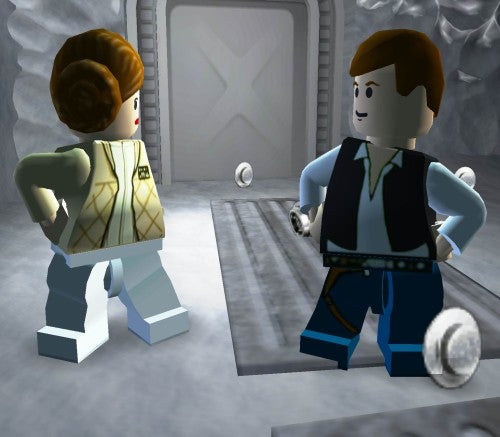