Once again it’s that time of year when all right-minded souls ponder one of life’s biggest questions: which of the recent crop of games will do the best job of banishing the Boxing Day blues and take us partying through to New Years Eve. The likes of Forza 3, Dragon Age and Modern Warfare 2 will do the job, but you can’t really disappear for hours at a time when family or friends come around. ‘Tis the season to be jolly, not make like Billy no-mates. Wii Sports Resort is a contender, but then most of us over-did that in the summer.


Not everyone has the voice for Singstar, the knowledge for Buzz or Scene It!, or the sheer nerve and patience for New Super Mario Bros Wii. No, to my mind this year’s best recipe for glad times with kith and kin is Lego Rock Band. While it has at least two huge, whopping flaws, it’s hard to think of a game better suited to Boxing Day action, or an audience that might take in anyone from kids to mates to parents, grandparents and in-laws. 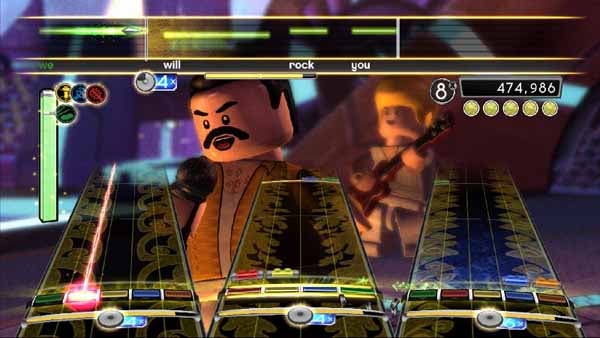 Why? Simple. Lego Rock Band takes all the fun stuff we’ve come to expect from the Lego Star Wars, Indiana Jones and Batman titles, and applies it to the cognoscenti’s choice of music game, Rock Band. In fact, the main career mode is basically identical. Up to four players can form a band, constructing the singer, drummer, guitarist and bass player from a selection of Lego heads, legs, hairstyles and bodies.


Your band plays gigs, earns fans, stars and Lego ‘studs’, and in doing so unlocks and purchases new vehicles, which in turn open up more venues and more gigs. Along the way you might want to hire managers, producers and other members of your entourage, giving you bonuses and – occasionally – something else you need to take your band up to the next level. If you’ve played Rock Band and Rock Band 2, Lego Rock Band is a different experience, but still very comfortable and familiar. 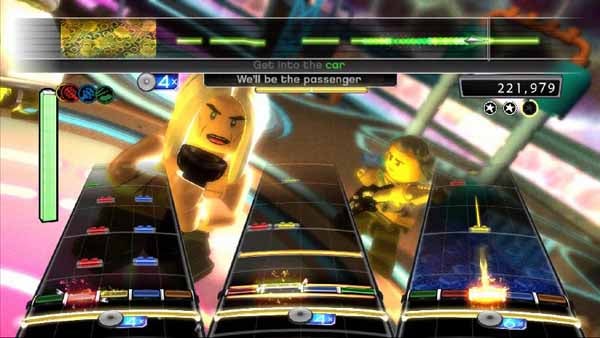 The same goes for the core gameplay. Whether you’re playing bass, drums or guitars, it’s all about hitting the right button, or right pad, in time with the notes that appear on your scrolling display. If you’re the singer, just try to get the phrasing right and stay in tune. By getting specific sequences of notes you earn ‘overdrive’, and with a tilt of the guitar headstock skywards this can be deployed to earn extra points, or save a band member who has got into trouble. If you’ve played Rock Band or Guitar Hero before, then you won’t get many surprises.


Some changes have been made to make Rock Band more accessible to the family audience. It’s now impossible to fail the average song so that you have to repeat it from the beginning – mess up horribly, and you’ll just earn fewer studs when the song is completed. What’s more, there’s a super easy mode where you merely have to hit any button or pad at the right time in order to push through – ideal for the under-six and over-sixty contingents alike.

Those of us who really, really suck at drums will be over the moon to see an auto kick-drum option, while most songs are now available to play in shortened versions. Admittedly, some of the edits are less than sensitive, but it’s a good idea when you’re dealing with under-fives hyped up on sugar and Fox Kids.


In the meantime, the Lego team at Traveller’s Tales hasn’t been afraid to mess with the formula a little bit, all in the name of added fun. As you play through your gigs and setlists, you’ll see new challenges and special events open up. Some impose limitations on your band, banning overdrive for instance. 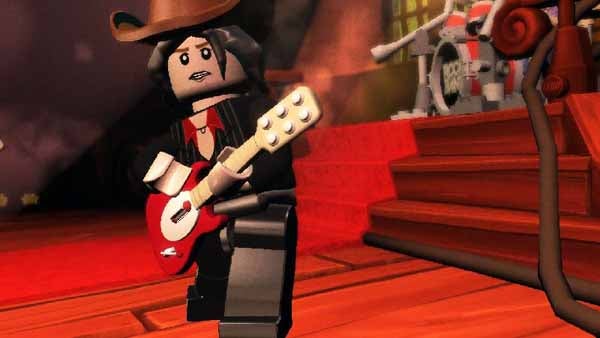 Others split the song into discrete solo sections, so you take turns to keep the track going in the knowledge that, should one player fail, the whole group fails. Best of all, all of these challenges are given wonderfully silly storylines. Do you believe that the power of rock can rid a haunted mansion of its ghosts and ghouls? Or destroy entire buildings? Or defend a pirate ship from a giant ‘rocktopus’? Play Lego Rock Band and you will.


And of course, there’s the game’s headline feature. Polishing off certain gigs will trigger a playable flashback sequence, recreating performances from the likes of Queen, Blur, Spinal Tap, Iggy Pop and Let’s Dance era Bowie in Lego form. These sequences epitomise what the game does so well; taking that brilliantly silly Lego presentation, and using it to affectionately take the proverbial out of the stars, the clothes and every rock cliche in the book. 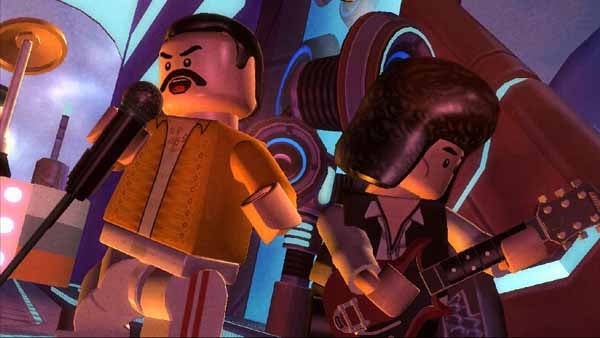 Nor does Lego Rock Band disappoint on the customization front. While the options seem limited at first, a little play soon opens up new bodies, legs and hairstyles that lampoon every style of music (and musician) going. While you’re at it, you can add a selection of weird furniture to your own Rock Band den, and transform your roadies from grizzled biker types into cuddly monsters, emo kids, glam rockers or worse.


The Lego bit works brilliantly, and the cut-scenes, the characters, the venues and all the stuff going on in the background while you perform will make you laugh. Unfortunately, the game falls a little shorter when it comes to the actual Rock Band stuff. Firstly, there are no online modes, making it impossible to start and run a band with friends or family far away if you’re short of company for an evening. More seriously, the song choice is limited to a rather scrooge-like 45 tracks.

Now, the tracklist is surprisingly rich and eclectic, taking in rock classics, contemporary and alternative rock, the odd bit of pop and country, some recent British stuff and the usual US pop/punk/emo nonsense. We get the Kaiser Chief’s (Ruby), The Final Countdown (Europe) and the ultimate cheesy Rock Band band, Bon Jovi (You Give Love a Bad Name). We also get the Jackson 5 (I Want You Back) and the theme from Ghostbusters.


Note placement – the old Guitar Hero 3 bugbear – is consistently tight and well-thought out, and at expert difficulty the game still packs a considerable challenge. All the same, it’s a short tracklist, and one that feels stretched over a reasonably long career mode, meaning you’ll inevitably end up repeating songs. Lego Rock Band’s family-friendly rival in the Guitar Hero camp, Band Hero, gave you a larger selection, and while it went a bit too far towards pop and the teenage girl market, still covered most of the same bases. 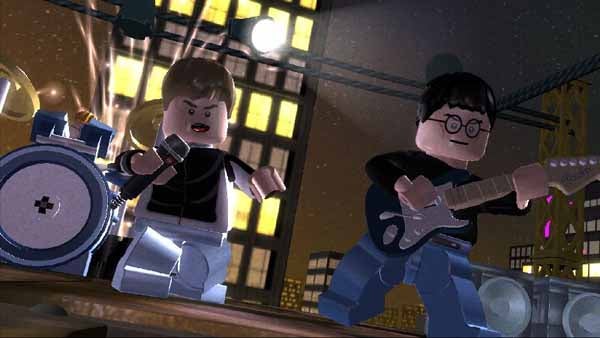 To make things slightly worse, you can’t import Rock Band or Rock Band 2 tracks, though the game will work with any ‘family friendly’ rated content you’ve downloaded from the Rock Band store, and any you download using Lego Rock Band as the front end. That’s fine if you’ve already invested heavily in track packs and Rock Band albums, and good news if you’re looking for a way to convince reluctant kids that Back in Black and Cherub Rock are “what proper music sounds like” but it’s still a bit of a letdown for those who want to see old Rock Band and Rock Band 2 favourites played in Lego form.


These are serious issues; serious enough to get Lego Rock Band marked down from eight to seven, and stripped of any awards I might have wanted to give it (though, to be honest, there’s not really enough innovation for that). Does this mean that I wouldn’t recommend it for those wanting to add some extra fun to the next few weeks? Not on your nelly. At its best Lego Rock Band takes the finest element from its musical parent – the feeling that you’re blasting through a storming performance in front of screaming fans – and adding an extra dash of Lego fun. 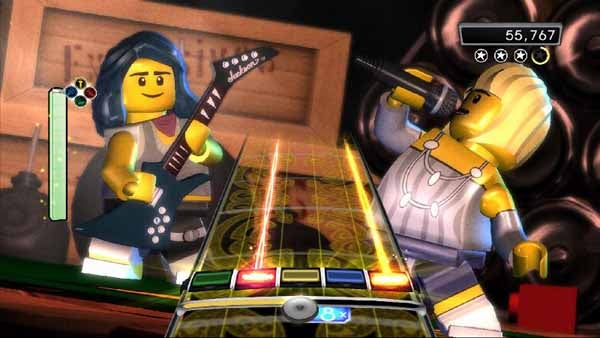 As our own house band smashed through the cheesy crescendo of Walking on Sunshine or the mildly wretched country hit, Life is a Highway, the old Rock Band feeling took over. It’s a game that just makes you feel good. Even given the lack of content, the price isn’t disastrously out of order, and if this game doesn’t put a smile on your face, I can’t really imagine what will.


The lack of tracks is an issue, but this is a great example of a brilliant game adapted for a family audience, with all the usual Lego fun. Rock on.