What is the LEGO Ideas: Ship in a Bottle?

The name says it all, really. It’s a ship in a bottle, but, well, it’s made from plastic bricks. And that makes it at least 172% better than any other bottled ship ever.

Being part of the Ideas series, the Ship in a Bottle is based on a design submitted by a LEGO fan that garnered enough public votes for LEGO to turn it into an official set. The original idea was added by Jake Sadovich to the Ideas platform back in November 2016, and received the support of 10,000 other fans within two months.

The LEGO Ideas: Ship in a Bottle is exclusively available from LEGO Stores and shop.LEGO.com. Read on to find out whether it’s worth your valuable building time. 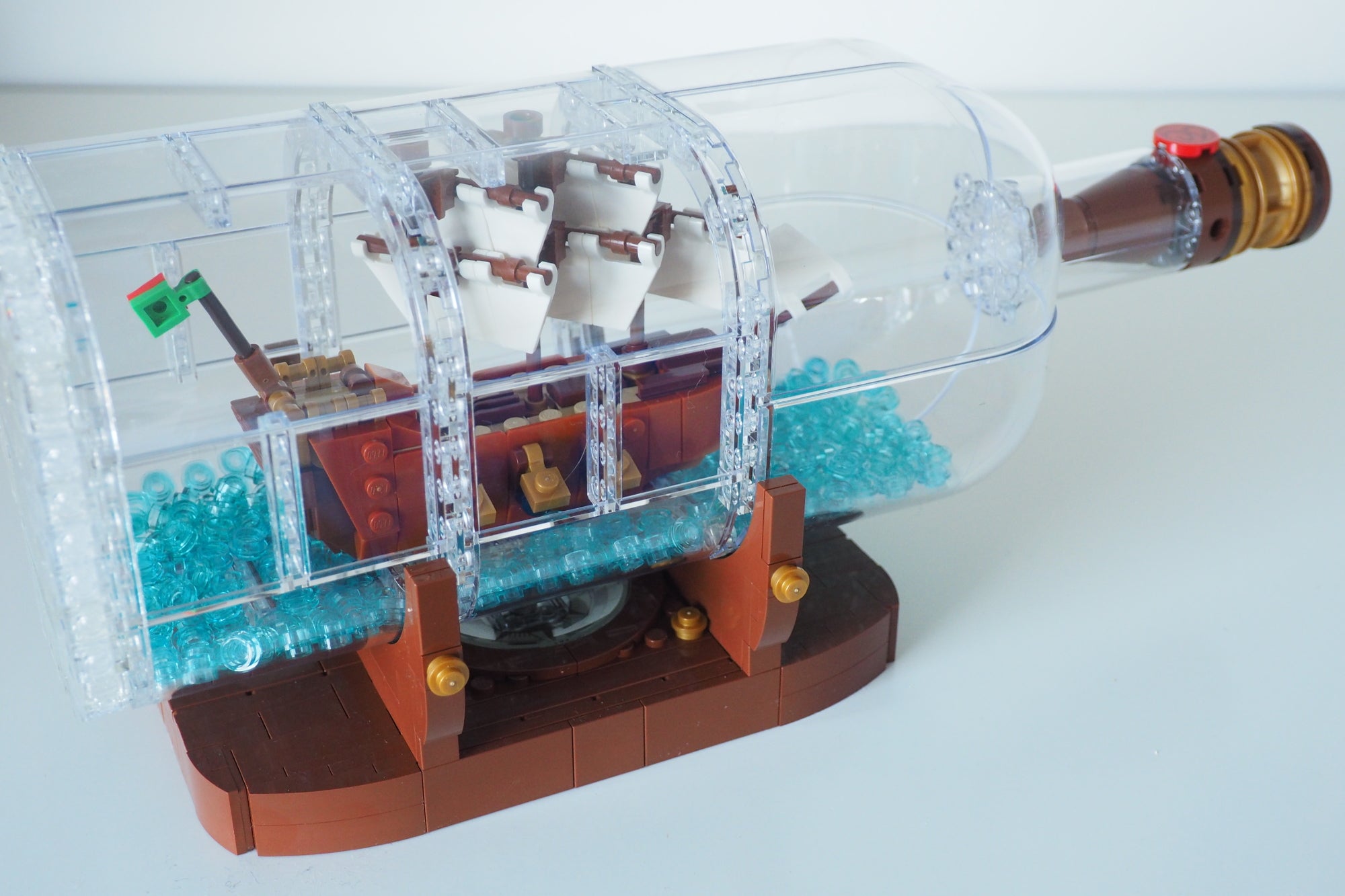 LEGO Ideas: Ship in a Bottle – What do you get?

The Ship in a Bottle comes in a nicely nautical-themed box, containing 962 pieces split across six bags.

Yes, that sounds like a generous amount, but two of those bags are just for the 284 transparent blue 1×1 round plates that sit loosely in the bottle for an ocean surface effect.

What the rest of those pieces add up to is the ship (‘Leviathan’), the bottle, a bottle stopper, and a display stand. It’s really just an ornamental set, so don’t expect any scope for play; just make a space on the shelf and enjoy the view. 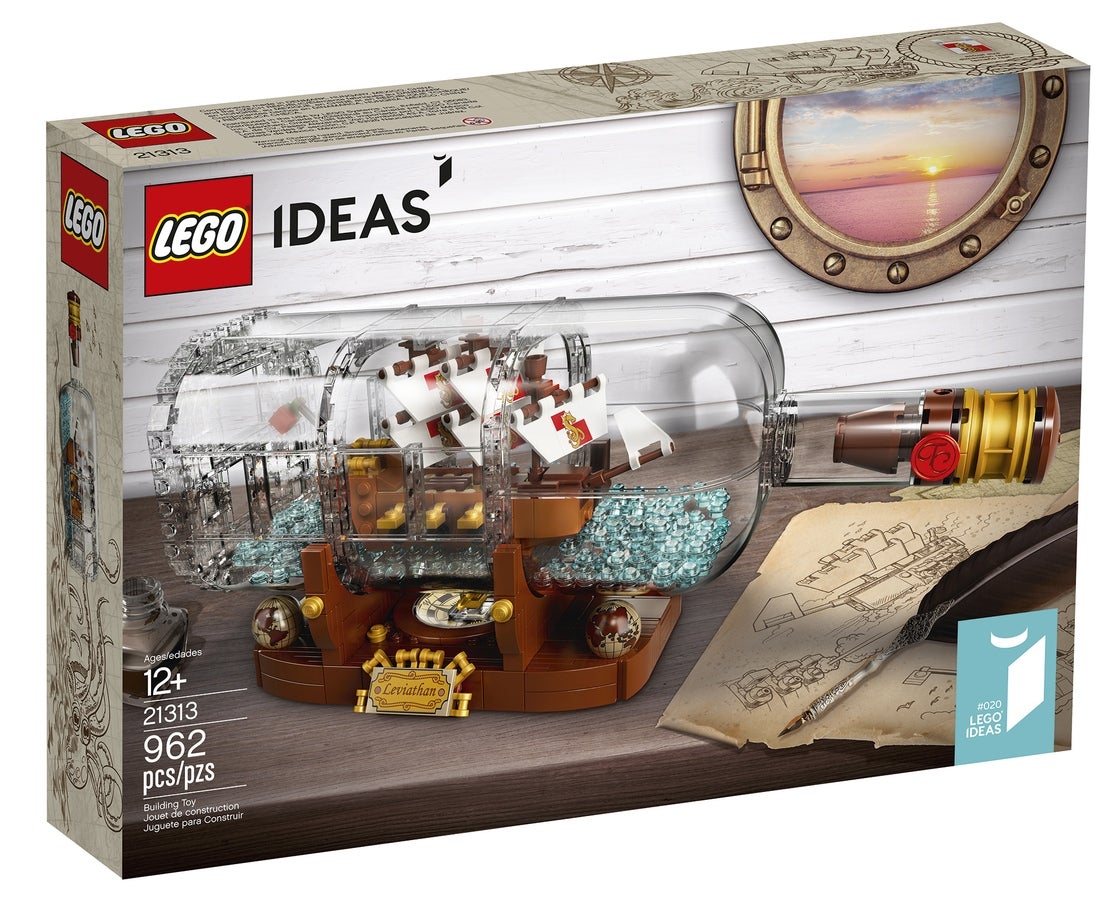 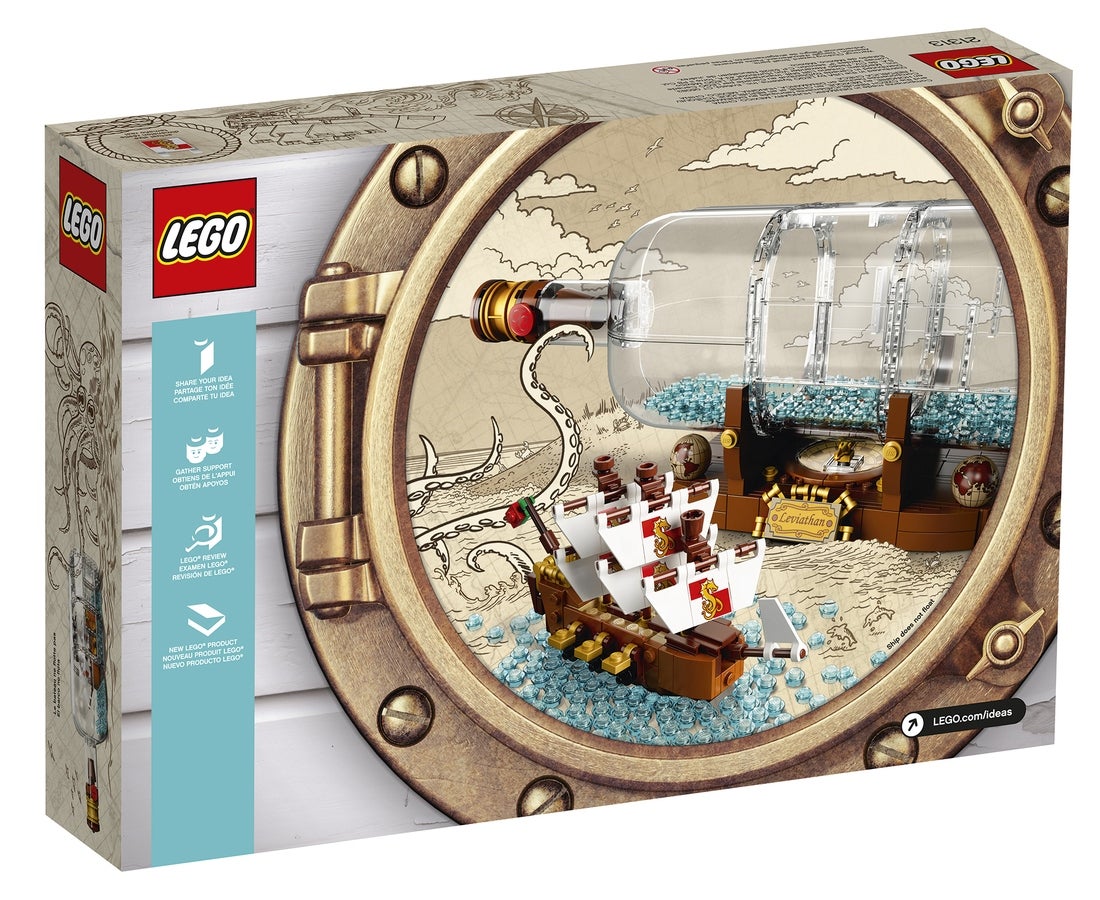 LEGO Ideas: Ship in a Bottle – How fun is the build?

The build is spread across 167 steps split into four stages. As usual, LEGO provides almost foolproof pictorial instructions that are a work of art in themselves.

The first stage (and bag of pieces) is to make the ship, which took me less than half an hour. There was a bit of repetition for the mainsails and gun ports, as well as some mirrored sections because the hull is symmetrical. No big deal, though, since it’s quite a short build.

The bulk of the work is in forming the bottle – but it’s definitely worth it. I spent around 40 mins putting all the transparent pieces together, with the complex bottom taking up most of that time. It made my eyes go funny trying to pick out the 1×1 slopes from a pile of 1×1 square plates, but the pay-off is seeing something so beautiful taking shape. 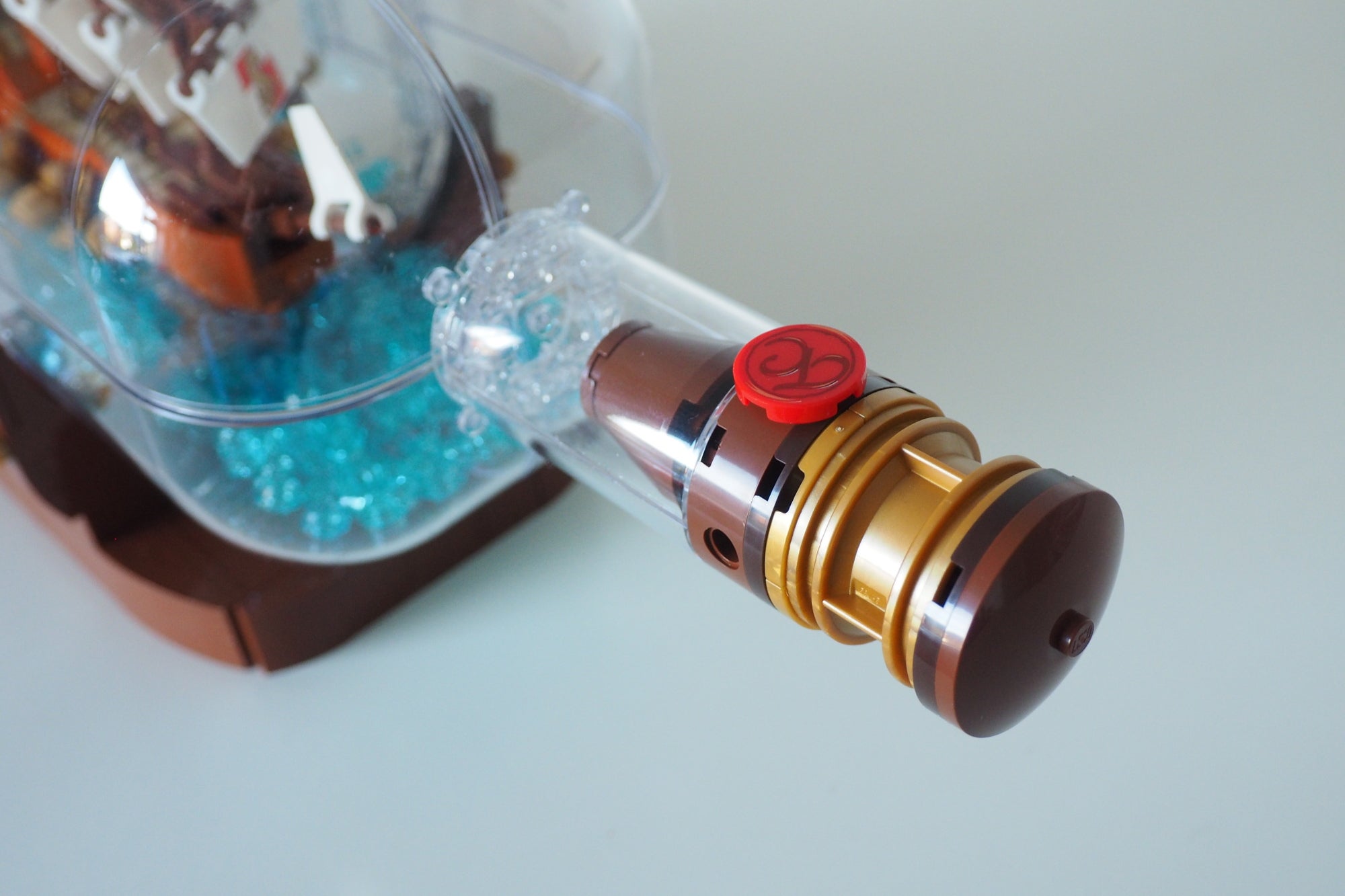 I wasn’t entirely convinced by the way the instructions tell you to attach the bottleneck, though. It felt like I was putting a little too much stress on the largest clear sections, so they flexed quite a lot when I was trying to get a tight fit. I ended up removing those big pieces, attaching them all to the neck, and then pushing the whole thing back on. (Incidentally, this explains how the wax seal ended up mistakenly facing upwards in the photos. Hey, nobody’s perfect.)

The display stand took around 30 mins to build, and again involved some repetition due to the symmetry. But because this set is essentially split into three parts, and finishing each bit feels like a mini-build, repeating steps didn’t really bother me. There’s also a nice mix of techniques used across each one. 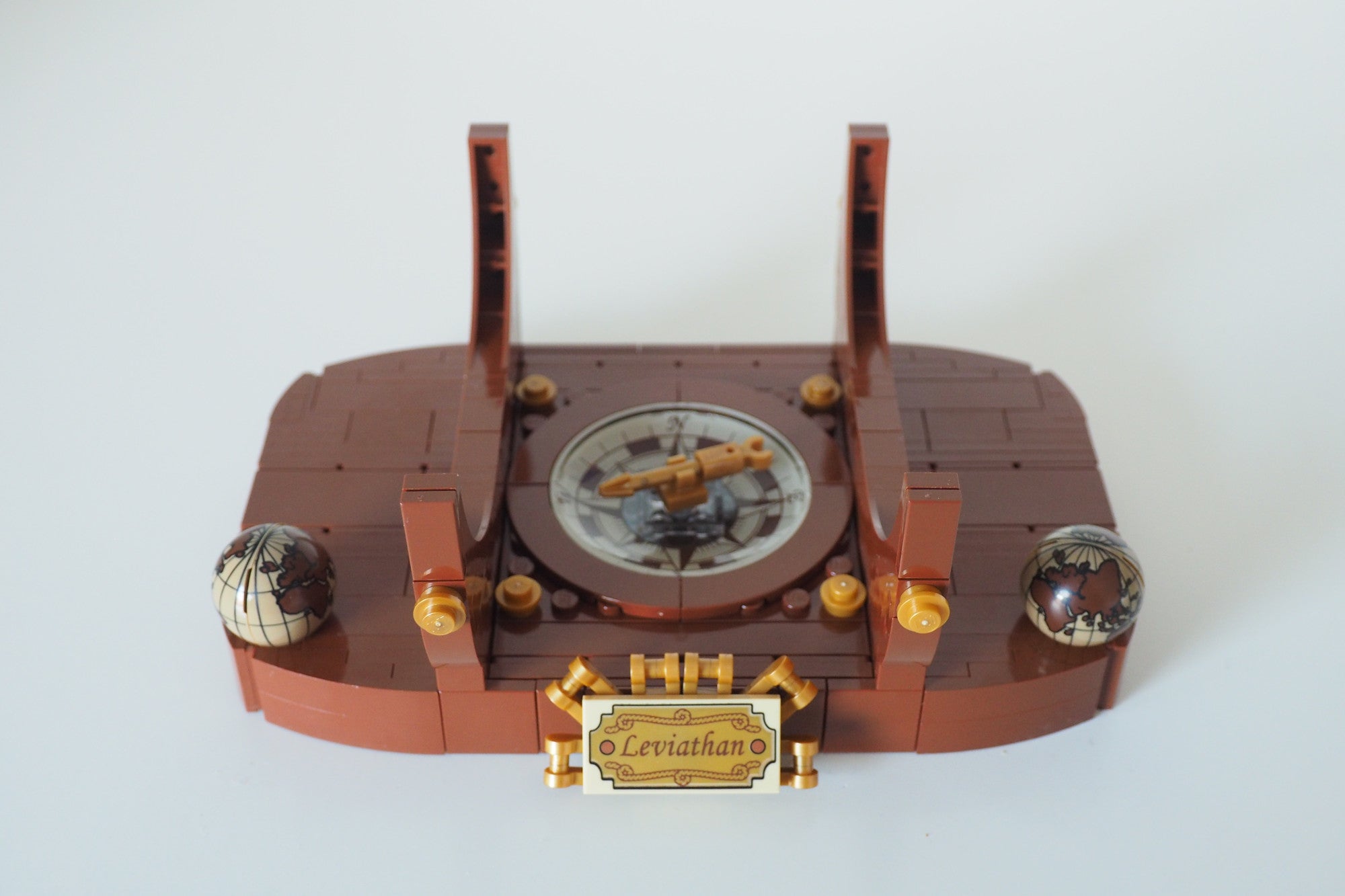 LEGO Ideas: Ship in a Bottle – How does it look?

The finished set really is jaw-dropping in the flesh. Pics don’t do it justice.

The real star of the show here is actually the bottle. It’s beautifully formed and clear enough, because of the minimal pieces used for the sides, to display its precious contents. The stopper is also nicely done, and the printed wax seal is a nice touch.

The stand has also been excellently shaped, and comes with some great details. There are a pair of spinning globes on the front corners, a printed nameplate for the ship, and a little hidden gem in the form of a compass, which is mostly obscured when the bottle’s in place. 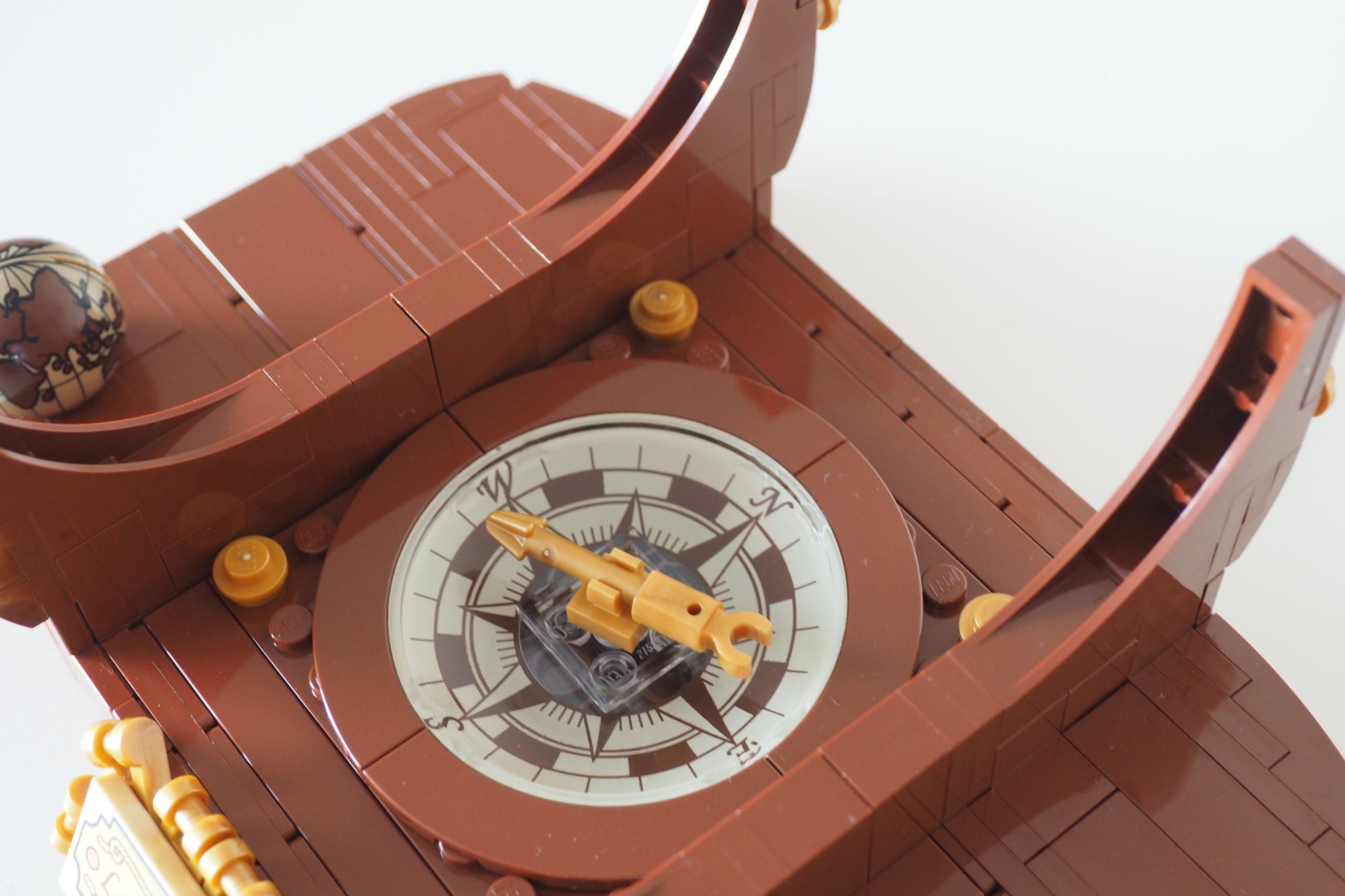 Looking at Jake Sadovich’s original design, I personally think LEGO has done a lovely job of refining the bottle and stand. There’s less of the One-Eyed Willy scratch-built chic and more of the admiral’s table about it, but I’m fine with that.

Unfortunately LEGO has then oversimplified the ship a little. Sometimes less is more, but when you’re showcasing something – say, by stuffing it in a bottle for display – you actually want plenty to see, to spot something new each time you look.

That said, the addition of covers for the gun ports is nice, and the printing on the sails is good. The overall effect created by the ship, the bottle, the transparent blue round plates to represent water, and the stand is all really lovely. It’s just let down a tad by that lack of a few more things to reveal themselves on closer inspection of the Leviathan – especially since this isn’t exactly a cheap set. 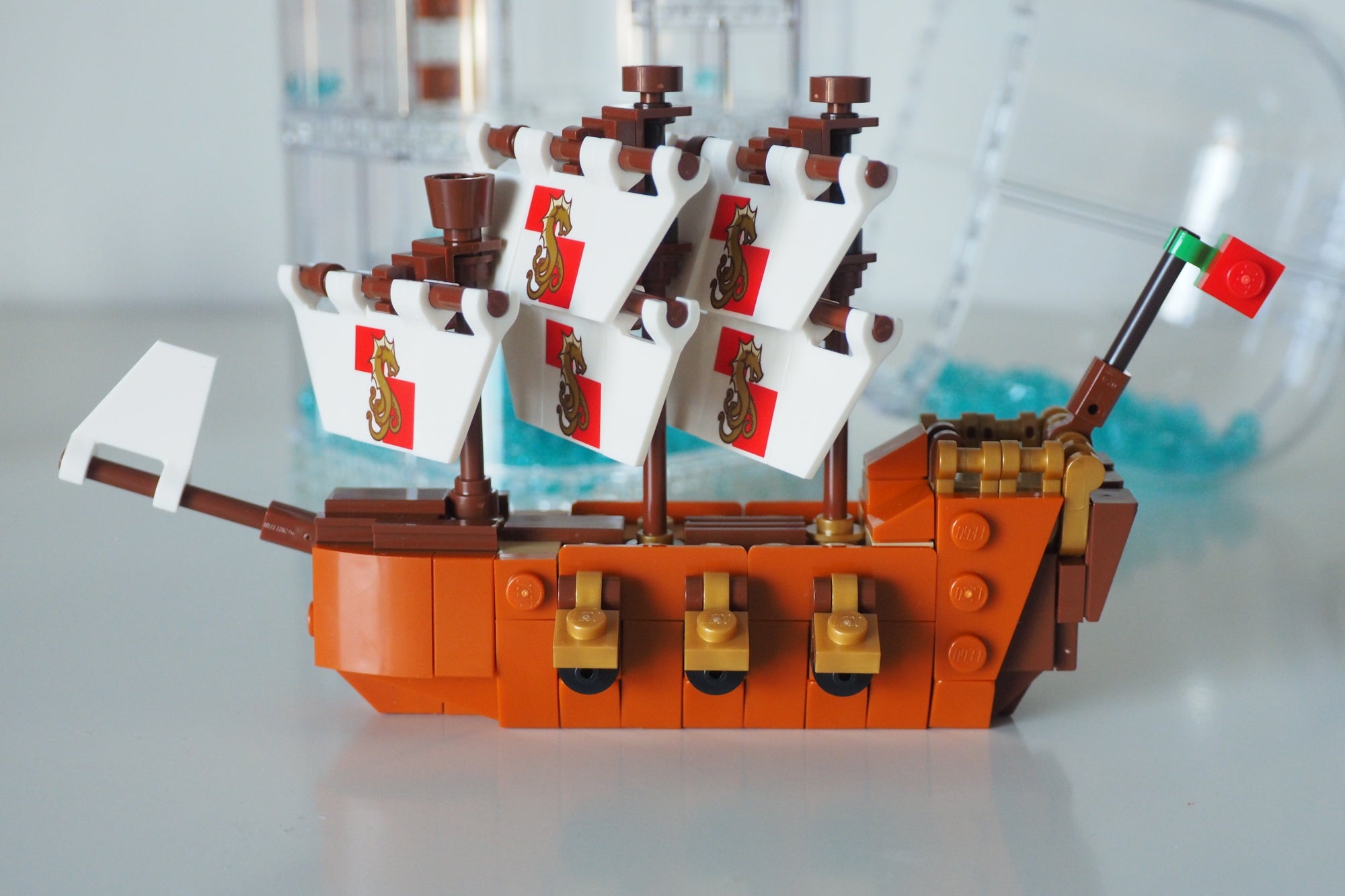 Why buy the LEGO Ideas: Ship in a Bottle?

There’s no doubting that this is a beautiful model, and really offers a unique build. You’ll have fun making it and be proud displaying it.

It’s just a shame that it’s quite expensive, and that the detailing of the ship itself isn’t quite a match for the exquisite bottle and stand. If you’re not frightened to modify your LEGO builds, though, you might see this as a nice challenge.

Regardless, I wouldn’t hesitate in recommending you clear some shelf space for it.

A really unusual build, and a set that would’ve been utterly perfect if only the ship were as nicely detailed as the bottle and stand.