If you have a tablet and young children, then you will probably already know the plus points and pitfalls of getting the two together. On the positive side, the masses of games, videos and child-friendly apps available are great for keeping busy hands and busy minds occupied when you need them to be, while touch controls are easier than old-fashioned keys or buttons for younger kids to get to grips with. What’s more, all the major OS platforms are developing decent libraries of creative and educational apps, which can be very helpful when you want something to back up the more conventional work they’re doing at home or in school.

On the negative side, tablets are still a sizable investment, and most of us feel a little uneasy when they’re in the grips of a five-year-old, or being prodded hard and repeatedly by more impatient youngsters. Perhaps. Instead of letting the kids loose on your iPad Mini or Nexus 7, it might be better to give them something built for them. 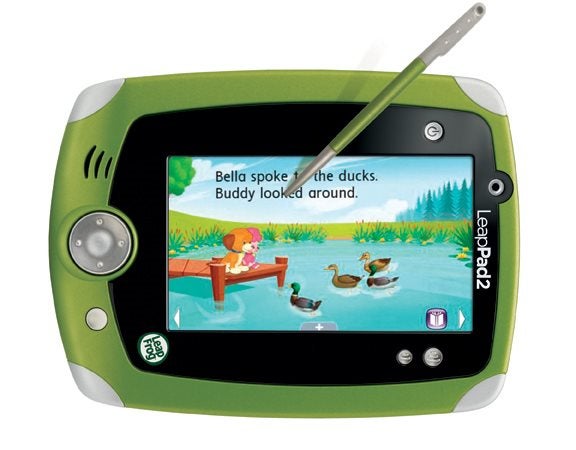 Until fairly recently, that wasn’t such a tempting idea. Toy computers bore little relationship to the real thing, and the software was sometimes dire. With products like the LeapPad 2 Explorer, however, the gap is closing. No-one could accuse it of being comparable to a proper grown-up tablet, but it has its low-resolution colour display, its own touchscreen interface and its own apps ecosystem, while coming wrapped in a chassis your average five-year-old can’t mangle, and at a price your average parent might be willing and able to afford.

LeapPad 2 Explorer: The Hardware
Shipping in green or pinky-purple, the LeapPad 2 Explorer feels as much a toy as a tablet, with the 5-inch screen surrounded by an inch or more of chunky plastic in all directions, a chunky D-Pad at the bottom and two battery covers/handgrips on either side of a textured panel at the rear. It’s mostly controlled with a stylus, which slots into a recess on the right-hand side and is tethered to protect against loss. The only physical controls are the aforementioned D-Pad, volume controls to the right of the screen, a home button at the bottom and a power button to the left. Connectivity comes down to a socket for the charger, another for headphones, a cartridge slot and a mini-USB connector. It’s all very straightforward. As grown-ups, we value thinness, sleek lines and slick, metallic finishes, but in the LeapPad’s market the chunky plastic approach makes more sense. Not only is it a robust construction – it’s also very easy for small fingers to hold.

Needless to say, the screen isn’t exactly Retina-quality. A 480 x 272 resolution isn’t exactly sharp even on the rather measly 5-inch screen, and while colours are bright when viewed face on, viewing angles are predictably poor. If you’re used to an iPad, a Nexus 7 or a Kindle Fire HD then you’ll note that the LeapPad 2 Explorer’s screen limits graphical detail and how readable small text can be, but our test subject – my six-year-old daughter – had no complaints about cartoon videos, storybooks or games. If Merida from Brave looks like Merida from Brave, that’s really all she needs to know. Sound is both surprisingly full and surprisingly beefy, showing what difference a little extra size can make. 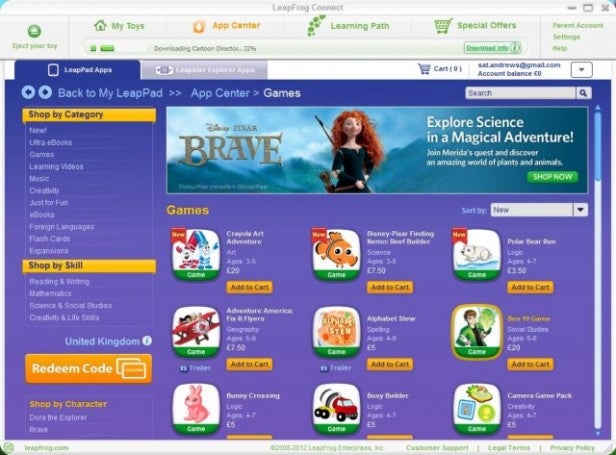 LeapPad 2 Explorer: Cameras
The LeapPad 2 also packs in two cameras; a two megapixel snapper on the back, and a matching one just above the screen. Neither produces what you’d call great photos, and low-light performance is as noisy and poorly focused as you might expect – and that’s before you have your eager offspring waving the thing around mid-shot – but they’re not so bad that they can’t fulfil their intended purpose: taking quick snap shots that your little monkey can monkey around with after shooting. 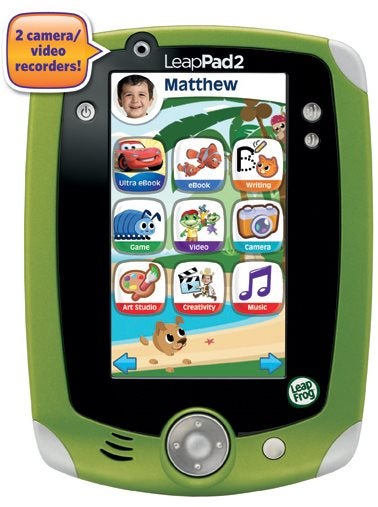 LeapPad 2 Explorer: Performance and Battery Life
We haven’t got too many complaints about the LeapPad 2 Explorer as a piece of hardware. The touchscreen really needs the stylus to work and even then isn’t all that responsive; any app where you have to tap twice in quick succession can be easily flummoxed. With a 500MHz processor, performance is up to running simple 2D games and videos, but even here the motion isn’t always 100% smooth. Finally, the LeapPad 2 runs on four AA batteries, with four alkalines provided in the box. You can always use rechargables, and LeapFrog sells an optional charger. With a battery life of around eight to nine hours it’s wise investing in some good ones.

LeapPad 2 Explorer: Software
The LeapPad runs on its own OS, and it’s very bright, very colourful and very simple. Each child using the device has their own profile, and once you select that profile you’re presented with several pages of apps, all represented by a chunky icon.

With no onboard WiFi there’s no way to install apps on the LeapPad 2 itself, and it’s up to parents to browse, purchase, download and synchronise apps using the downloadable Leapfrog Connect software (with Windows and Mac versions available). There’s a fairly extensive range of apps, videos and music downloads and eBooks available, though there’s a lot of variation in the pricing. eBooks, for example, tend to hit at the £3.50 to £5 mark, with music collections prices at £7.50. Creativity apps also sit around the £5 to £7.50 mark, but games can be anywhere between £3.50 and £20 for titles that – frankly – would be £3.99 apps on Android or iOS. 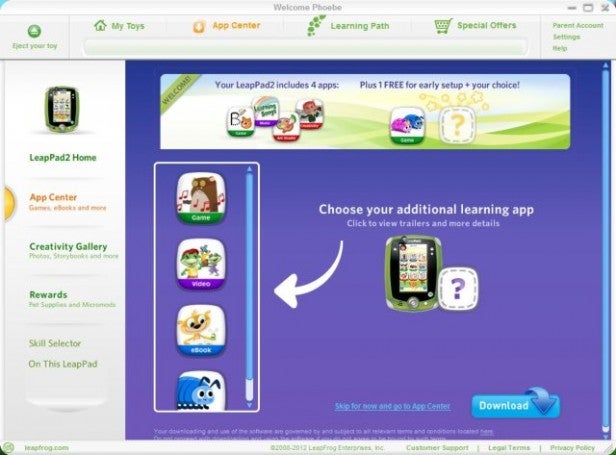 LeapPad 2 Explorer: Apps
Our sample 6-year-old loved a lot of our sample apps. We had moments of frustration with the Cartoon Director app, but loved the way you could create simple scenes, add scenes and faces from photos or record our own dialogue. The Pet Pad virtual pet app went down a storm, even though it’s a fairly simple pet sim with some bolt-on educational elements, and Stretchy Monkey – a game where you drag the titular simian around the screen – was another big hit. The built-in camera and image-editing apps work well, and frequently gruesome results can be uploaded to a gallery on the PC, where they can also be printed or emailed. 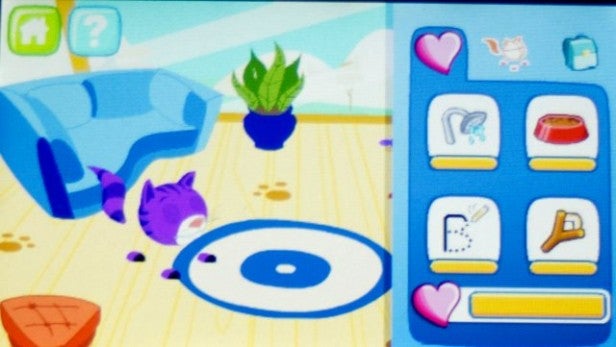 Children’s eBooks were also popular – particularly the Disney ones – though everyone agreed that they weren’t as well presented or feature-rich as those we’d already looked at on the iPad. The best thing about the LeapPad 2 apps is that they actively encourage creativity, numeracy and literacy, and that many tie in to a Learning Path section of the Leapfrog Connect software, where you can track your child’s progress through the various apps. 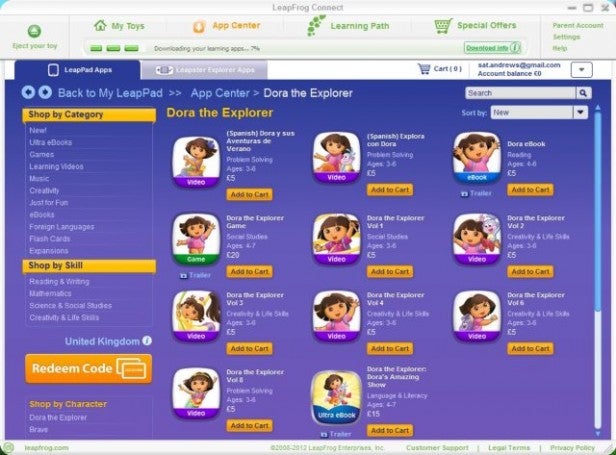 LeapPad 2 Explorer: Creeping Doubts
There are some things we didn’t like, however. The majority of the apps we tried are clearly American and tailored to an American market, and the ‘Hey, Wow!’ voices will grate on your nerves as much as the references to baseball and thanksgiving will baffle your offspring. We also didn’t come away feeling that the software stretches across a particularly large age range. Even going in in the guise of an older child, we were hit by how basic so many of the literacy and numeracy tasks are – and even our six-year-old didn’t feel stretched much of the time. While your mileage will vary depending on the apps you download, you could find your children losing interest once they hit seven or so, leaving you wishing that you’d bought a grown-up tablet after all.

And this is where doubts start creeping in. Five to seven year-old kids will love the LeapPad and many of its apps, and at the sub £70 price point it’s not hideously expensive. Start buying apps, games and eBooks, however, and the overall cost soon mounts up, and we can’t help suspecting that you’d still be getting mileage from – say – a Nexus 7 or a Kindle Fire when the LeapPad 2 was gathering dust in two year’s time.

Of course, these devices don’t have the LeapPad 2’s ease of use, robust built quality or built-in child safety. We wouldn’t recommend leaving a normal tablet with your kids unsupervised, particularly with a live Internet connection. Yet with even budget tablets offering great screens, some fantastic child-friendly games and education apps and better video playback, you wonder if they’d make a better long-term investment – and one the whole family can share. You’ll save money on the apps and games in the long-term, and have access to a larger ecosystem of books and video content. You’ll have to supervise and manage them more carefully, but you’ll get something that stretches further as your child grows up. 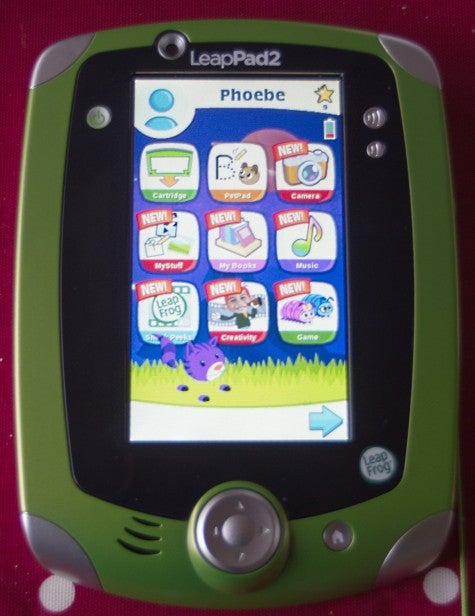 Verdict
If you’re looking for a high-tech gadget for your early primary kids, then the LeapPad 2 Explorer has a lot to recommend it. It’s cheap, well child-proofed and supported by some strong apps. You might find yourself put-off by the performance, camera quality and dinky low-resolution screen, but it’s unlikely that your offspring will be bothered. Most of all, kids of the right age will love it. It’s fun, they can use it relatively unsupervised and they won’t have to share it with you. That said, you have to wonder: with cheaper apps, better hardware and access to more books and video, wouldn’t a grown-up tablet be a better long-term bet?