Jolie coffee machine – At a glance

Designed to suit tiny kitchens, and those who hate the peace of an early morning being broken by whirrs and grinding, the Jolie is compact coffee perfection.

The smallest and quietest of the Lavazza A Modo Mio machines, it’s dinky enough to be hidden by an oven glove and, if you visit its micro-site (lavazza.co.uk/jolie), you can even compare its sound levels (max 44dB when brewing) against other noises, such as running water and chopping.

Available in red, green, blue and white with a choice of 10 coffee capsules, the diminutive Jolie is the espresso machine for people who didn’t think they had room for one. 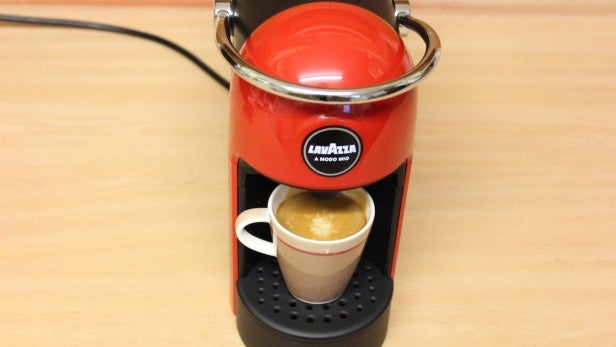 In order to reduce its size, the Jolie has been stripped back to a basic curved-block shape. However, it still has a few design details that separate it from comparable machines.

The first is that it’s available in a selection of bright colours. Another is an internal capsule compartment that’s made up of two parts: a container with a separate drainer, which means you can tip the liquid from used capsules into the sink instead of into a bin with the pods. Its removable cup platform also adapts it for espresso cups or larger mugs.

A lidded 600ml water tank sits at the back, which is adequate for the size of the machine. On top, the design has again been reduced to the bare necessities, with one button to turn the unit on and off, or dispense and stop dispensing, an opening into which you drop capsules, and a slim chrome bar that rotates to lock capsules into place and release them after brewing.

There’s an auto-shutdown feature after nine minutes of non-use, and the 0.8m power cable can be aligned to either the left or right for added flexibility. 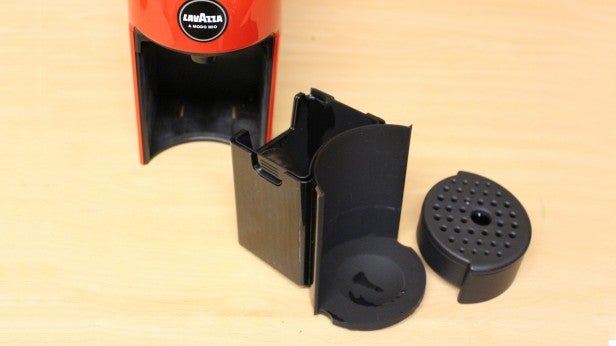 Jolie coffee machine – What is it like to use?

The Jolie isn’t just small, it’s quick to reach brewing temperature – its thermoblock heats up about 15 seconds after being switched on.

Its water tank is quick and easy to fill, the lid detaching entirely to create a wide opening. However, since the lid is a disc of clear plastic, there’s the potential for it to become separated from the machine and mislaid.

I started by using an A Modo Mio coffee capsule to make an espresso. The pod drops into the capsule-shaped recess at the top of the machine and the bar rotates forward to hold it in place.

When in place, the platform was the perfect height for the small cup, ensuring there were no splashes as coffee was dispensed. Since there was only one dispensing amount (around 150ml), I had to stay and monitor the cup so it wasn’t overfilled.

There’s no guidance as to how long an espresso should be, and since there wasn’t an automatic setting, there was some guesswork involved. The Jolie was reasonably slow at dispensing. Rotating the bar backwards released the capsule and it dropped into the internal bin. 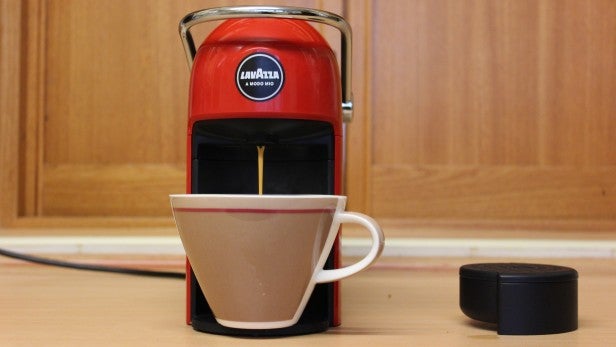 Next, I used the Jolie to brew a longer cup of coffee. Removing the platform, I placed a large cup under the spout. It had quite a wide rim, so it was slightly too curved to fit perfectly – but the spout could still reach the cup.

The maximum amount dispensed took around 1min 30secs, which felt like a long time. At one point the machine even continued to dispense when it had emptied the water tank; refilling it meant having to insert a new capsule.

Jolie coffee machine – How good is the coffee?

The lack of a preset to determine the dispensing amount means that getting ristretto or espresso just right every time is a bit of an acquired skill. However, one thing is certain – the Jolie produces a faultlessly smooth, velvety crema no matter how long the drink. Its coffee is everything a good brew should be: aromatic, full of depth, inviting and great quality.

Should I buy the Jolie coffee machine?

If your dream coffee machine is quiet, compact and fuss-free, then the well-priced Jolie should exceed your expectations with its rich coffee and lack of mess.

Latte lovers might tire of frothing milk separately, making the Jolie more suited to espresso or black-coffee drinkers who don’t mind refilling the unavoidably small water tank. The range of capsules on offer isn’t as wide as some systems, so make sure you’re happy with the choices on offer before buying.

A small, stylish espresso machine for those who value the simple things in life.