Moving to a new PC probably lies somewhere between losing your mobile and divorce on the list of life’s traumatic events. The thought of having to reinstall all your best loved applications and, more especially, re-establishing the hundreds of settings within them that make your computing life a bit more comfortable, is daunting. It’s enough for many of us to have put off moving from Windows Me to Windows XP for ages and now to be thinking twice about moving from XP to Vista.


PCmover 3 is here to help reduce the stress. It scans your old system, works out all the things you might want to migrate to the new one, moves them across and settles everything down so the new system seems strangely familiar. Or that’s the theory.

There are a few caveats on the things PCmover won’t move. It won’t move device drivers, which is probably as well in the case of XP to Vista migrations, as there’s still a lot of incompatibility between Vista and older drivers.


The program also leaves it to you to handle product re-activations on software that’s protected in this way – it’s not a way to circumvent copy protection. Finally, if you have copyrighted music on your old PC, protected by some form of DRM, you may need to move the licenses for the tracks manually.


To run the program, install it from CD or downloaded file on both systems – the source machine you’re migrating from and the destination one you’re migrating to. You’ll need to connect the two machines together, ideally with a double-headed USB cable, available from Laplink and supplied free in the boxed version of the product. If you prefer, you can use a network link, an external hard drive or DVD, a series of CDs or even a pair of parallel ports, though that’s slow.

To perform a migration, PCmover first creates a ‘snapshot’ file on the destination PC and this has to be loaded on the source PC, so the program can compare the files and applications and draw up a ‘moving van’ list of what needs to be transferred.


Once the snapshot has been read, you can choose to migrate everything on your PC or, new in version 3, to focus on the parts of your system you want to migrate. You can choose your source drives, particular filetypes to exclude – such as TMP and BAK files – and individual applications.


Laplink claims PCmover 3 doesn’t have its own database of applications, but uses the same mechanism Windows Add or Remove Programs does, to build a list of what’s installed. It will even, optionally, search for programs which don’t add themselves to the Windows registry.

Once all selections have been made, PCmover 3 builds a journal of the files it needs to copy. This took about a minute on our test system. If you’re happy with this, it then copies the files themselves, which takes rather longer – 30 minutes in our case to compress and transfer just over 6GB to a ‘moving van’ file. Unloading the moving van, once we’d transferred it to the destination PC via an external hard drive, took a further 50 minutes.

Once the files have been copied and unloaded, the destination PC contains everything it held before, plus all the applications and documents you selected from the source PC.


PCmover also offers a major-level undo function. All the details of the destination PC as it was before you migrated are saved in a separate moving van on its hard drive and if you choose, the program can return the PC to the state it was in before the migration.

When we first saw a copy of PCmover, the most obvious problem we could see was the fact that your £35.64 fee bought you just one use of the software. This runs against the paradigm for nearly all software sales, so we spoke to Laplink’s VP for Marketing, Emir Aboulhosn.


Aboulhosn explained that Laplink views PCmover more as a service than a software application; think of it like physically moving a PC from one office to another. You’re only going to do it occasionally, but it saves you a lot of time if you pay a removal company to make the move as a service. If PCmover saves you more than a couple of hours of your time, or your IT guy’s time, in setting up your new operating system, installing all your applications and renewing the settings, then it has paid for itself. 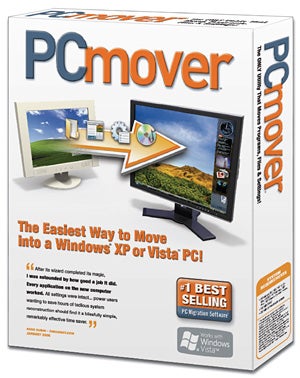 Looking at it this way, and allowing for the fact that Laplink’s multi-use licences attract good discounts (e.g. £110 for a 5-licence pack), this seems a reasonable revenue model for the company. If they were to leave the product open, you would only ever need one copy to migrate as many PCs as you had in your company.


This is a very clever piece of software that goes further than other migration tools. It handles not only documents, but also any applications you can legally move and the settings which you have made to make your life easier. £35.36 doesn’t seem a lot for this, but for the individual user who might do this more regularly, the one-use license might not be as attractive.