Kyocera Mita has a reputation for producing mono laser printers with a very low cost of ownership. It also produces colour machines though and the FS-C5015N is one of its latest small workgroup machines, designed for business. The Kyocera Mita website actually says the machine is not intended for graphics professionals, but then most graphics professionals would go for an ink-jet anyway.


The FS-C5015N is a tall, deep machine, with the height resulting in part from a substantial 500-sheet paper tray and the depth from the in-line, colour laser engine inside. As well as the main paper tray, to which you can add a second of the same capacity as an option, there’s a pull-down, multifunction tray, which can take an extra 100 sheets of special media and you can add a duplexing unit as a second option. 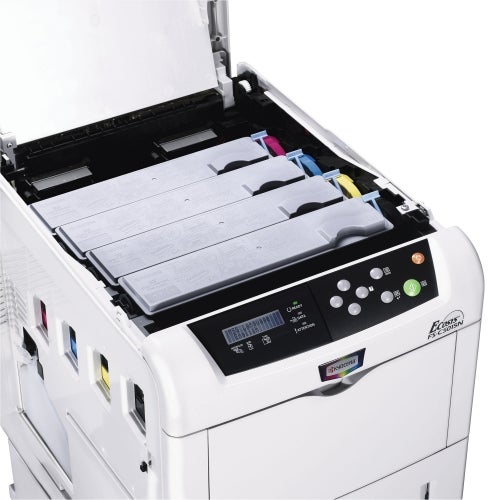 The simple control panel includes buttons for starting and stopping print tasks, calling up the menu and navigating through it. The two-line, 16-character LCD display is backlit, but there’s a distracting shadow at its right-hand end and a lot of reflection from the high-gloss surface of the display panel.


At the rear are sockets for USB and Ethernet, both of which are standard on this model.


Setting the printer up is very simple. Fit the four toner cartridges into their respective slots under the top cover and slot the waste toner bottle in behind a cover on the left-hand side. You can drop the cartridges into the wrong slots, which is distracting, though you can’t lock them in place.


Software installation is straightforward, with the Kyocera Mita driver providing all you need from the printer. It includes support for multiple pages per sheet, poster prints, scaling, printing documents with covers and adding watermarks.

Kyocera Mita rates the FS-C5015N as a 16ppm printer on both black and colour modes. On our test documents, it produced speeds of 7.7ppm and 7.3ppm for black and colour pages, respectively, under half the claimed speeds. Kyocera Mita isn’t alone in over-rating its print speed – most companies do it, so they compare favourably with their competitors.


If the printer is in sleep mode, though (by default, after 15 minutes), you can add 27 seconds warm-up to the time for the first print job. You can reduce the frequency of hitting this waiting time by setting a longer delay before engaging sleep mode, but then the power usage goes up – a quicker warm-up cycle would be a better solution.

The quality of prints from the machine depends on what you want them for. Text print is very good indeed; sharp and precise with no noticeable spatter and well formed characters. Solid colour for business graphics is also fair, though in our sample prints there was some mis-registration between block colours and overlaid black text.


Our colour photo print sample was none too good, with noticeable dither patterns and an overall fuzzy look to the finished image. It’s probably good enough for a positional proof, but you wouldn’t want to use it in a brochure or customer document. It’s getting to the point now where many business applications require colour photographic reproduction, so to say ‘not suitable for graphics professionals’ isn’t really a suitable let out.


As with all Kyocera Mita printers, the only consumable is toner. The standard cartridges offer 6,000 black pages or 4,000 colour ones, though the printer comes with ‘starter’ cartridges offering 3,000 and 2,000 pages, respectively. Is it really necessary to provide partly filled cartridges in a machine costing over £500? 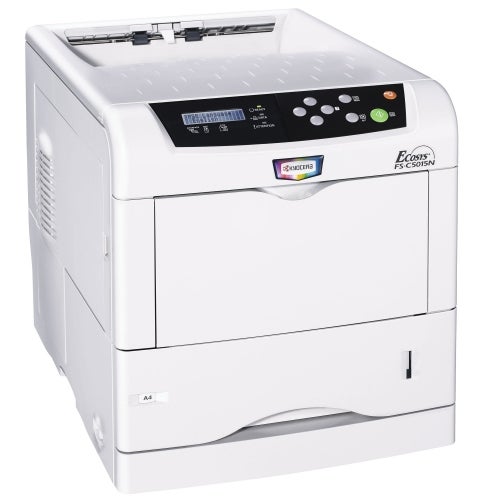 Assuming the standard cartridge fill rates and the cheapest prices we could find for Kyocera Mita toner and including 0.4p for a sheet of plain paper – as we always do – gives running costs of 1.67p and 7.04p for 5 percent black and 20 percent colour pages. These figures are good, but not the lowest we’ve seen recently. Dell’s 3110cn, which also uses a lifetime transfer belt and fuser, beat the FS-C5015N on both counts, for example, with corresponding figures of 1.42p and 6.36p.


With the monochrome lasers we’ve tested from Kyocera Mita, there’s little argument over the cost of ownership. With only the toner to consider, they are very cheap to run. Things are not so clear-cut with this colour machine. Although, again, toner is the only consumable, it doesn’t produce exceptionally low running costs, because of the price of the toner cartridges themselves.


Some aspects of the printer, such as its large paper capacity and well-written software, work in its favour, but others, such as its patchy status display and long warm-up time, act against it. It’s a good machine, but this is a heavily competitive market and it doesn’t stand out.