Kyocera Mita is best known for its business laser printers and multifunction machines, and for the life of its photoconductor drums, which often last as long as the machines they’re fitted to. The drum in the FS-3920DN is specified at 300,000 pages, but Kyocera Mita allows for two replacements, expecting this machine to print the best part of a million pages in some installations. 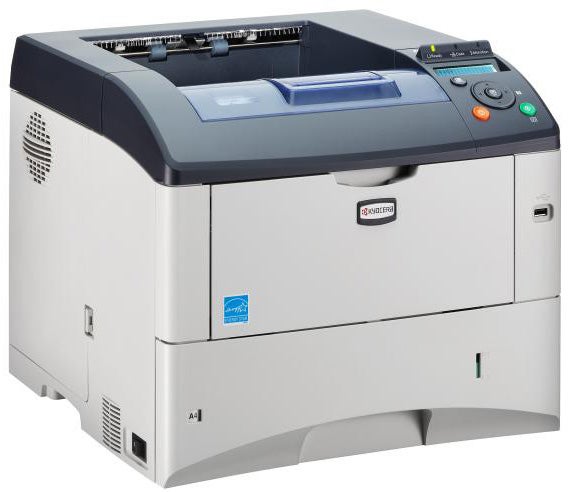 As well as being long-lived, the printer is rated at 40ppm and that’s one of the main reasons for its £500+ price. It’s a substantial machine, but not massive and looks functional in its cream and dark grey livery.


Its simple control panel uses a four-way wheel of menu controls with other buttons to start and stop jobs, but there’s no number pad for secure walk-up printing. This is a little odd, as there is a front panel USB socket, which can take PDF files from a USB drive and print them directly. Basic security and simple workgroup accounting would both benefit from being able to enter a PIN before printing jobs.


The 2-line by 16-character backlit LCD is mounted on a small Toblerone-shaped protrusion, which also carries status indicators in its top edge. The shape of the panel makes it easier to see across an office, if the printer needs attention. 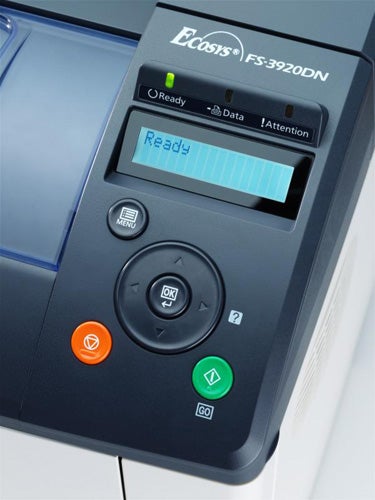 The main paper tray at the bottom of the front panel can take a whole ream of paper (500 sheets) at once, which is a good capacity for this class of machine, and there’s a 100-sheet multi-purpose tray which folds down from above this. That’s not all, as you can add a further three, 500-sheet trays beneath the machine and there’s an optional envelop feeder, too. This is a very expandable printer, which can easily grow as a business expands.


At the back are sockets for USB, 10/100 Ethernet and legacy parallel connections, so you should be able to integrate the FS-3920DN into most offices. Kyocera provides drivers for Windows and OSX, with Unix and Linux code available on request and the printer comes with both PCL and PostScript page description languages in emulation.

Kyocera Mita claims the FS-3920DN can print at 40ppm and, if it wasn’t for the processing time, this would be a fair claim. However, our five-page text test completed in 34 seconds, giving a real-world speed of only 8.8ppm and while this increased when we ran the 20-page test, it still only reached 23.1ppm. The five-page text and graphics test gave 11.54ppm.


All these slow speeds are down to the long processing time, before the first page of a job starts to feed. This varies between 17s and 26s, depending on the document, which is poor, given that many equivalent machines start feeding within 10s. The average office document is still four pages, so the real speed of this machine is a lot slower than the headline figure suggests.


Duplex printing is standard in the FS-3920DN and is handled efficiently, with no hesitation between printing the sides of each page. It managed 16 sides per minute on our 20-side test document. 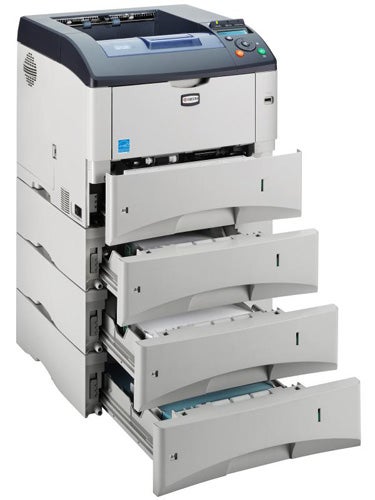 Printed output varies in quality, depending on the type of document you print. Text print is clean and dense, benefitting from the machine’s default resolution of 1,200dpi and greyscale graphics have plenty of tones to pick from, but are a bit patchy. This shows in our test photo print, too, where there’s slight banding in the sky and loss of detail in darker areas of the image.


Kyocera Mita nearly always wins the TCO section of group tests, thanks to its long-life drum. Many customers will only ever pay for toner and we’ve assumed that the 300,000 page life of the drum will be enough, when calculating costs.


Toner comes in 15,000-page cartridges, costing around £60 each, and gives a cost of 1.21p per page, including 0.7p for paper. This is pretty exceptional and makes the printer very inexpensive to run and cheap to maintain because of the high cartridge capacity.

The FS-3920DN is good in parts. On the plus side, it’s very inexpensive to run, with a cost per page many of its competitors would give a lot for. Print quality on text-based documents is also very good, but business graphics and photos aren’t as clean and smooth as from some others.


However, If this review sample is typical, Kyocera Mita needs to do something about the processing time before print jobs start. There’s no point in having a really fast print engine – and the one in this machine is capable of the headline 40ppm – if the machine waits for the best part of half a minute before starting to print. Small jobs are the norm in offices and the processing time then swamps the print time by as much as 3:1.