Having looked at the Xerox Phaser 3435 only days ago, the release of Kyocera Mita’s FS-2020D makes a good direct comparison. Both printers are small ‘team’ (workgroup) mono lasers, both boast duplex print as standard and both offer USB and parallel connections. The Xerox machine also includes networking as standard and comes in with an asking price around £70 lower than the Kyocera Mita, but the FS-2020D has a couple of tricks up its hard, ceramic sleeve which might redress the balance. 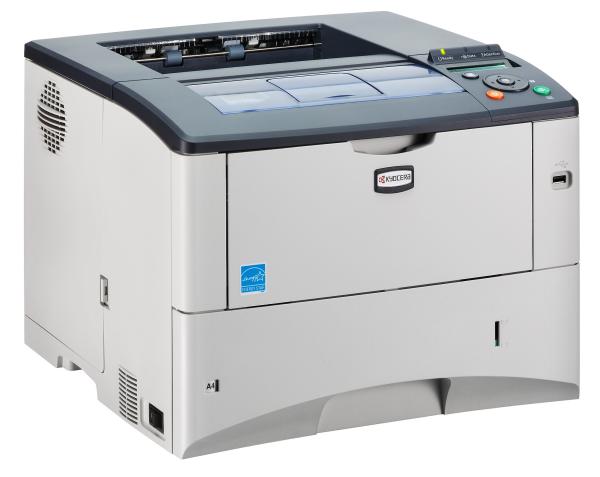 Decked out in cream and ‘midnight blue’, which seems more like ‘knockout black’ to us, the printer sits discreetly on the desk, given its speed and capacity. That capacity is epitomised by the main paper tray, which can take a full, 500-sheet ream of paper at a time. The Xerox Phaser can only take half that, so somebody will have to attend to its needs twice as often as with this machine.


Kyocera Mita includes a 100-sheet multi-purpose tray, too, and it can handle paper up to 220gsm, more card than paper and a good deal heavier than the Xerox’s 163gsm.


The FS-2020D’s control panel consists of a navigation ring with an OK button in the centre, together with a menu button and two to start and stop print jobs. There’s a 2-line, 16-character, backlit LCD display, for status and menu information. At the back there are sockets for USB and parallel, though for network support you need the FS-2020DN, which costs a hefty £110 more. 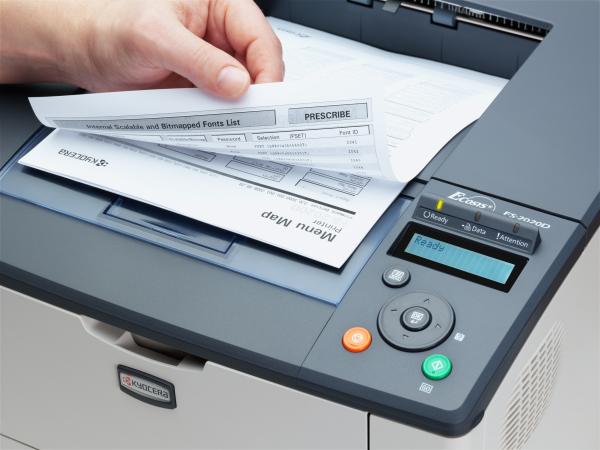 Driver installation is quick and easy and provides support for PCL 6 and Postscript Level 3 as standard. The driver is well laid out and includes provision for watermarks and multiple pages per sheet.


The only physical setup required is clipping the toner cartridge in place. Flip up the front part of the top cover and push the cartridge down until it clicks. There’s then an automatic charging cycle, which takes around 10 minutes, as toner is fed into the machine. A waste toner bottle slides in at the side behind a hinged cover.


Kyocera Mita supplies a 6,000 page ‘starter’ cartridge with the machine, so you’ll have to start buying toner much sooner than if the standard, 12,000-page part were supplied. This strikes us as a rather mean move in a machine costing nearly £400.

Kyocera Mita claims the printer can achieve speeds of up to 35ppm. Our five-page text document took 20 seconds to complete, which is 15ppm, but the longer, 20-page test took only 50 seconds, which is 24ppm. This is still some way off the claim and even in draft mode, which produces quite a presentable print, the printer still only managed 26ppm.


The printer’s duplex mode is comparatively quick and our 20-side document produced a speed of 14.6ppm. The five-page text and graphics print gave 16.7ppm and the 15 x 10cm photo print completed in 13 seconds. So it’s the usual story – respectable print speed, but overenthusiastic claims. 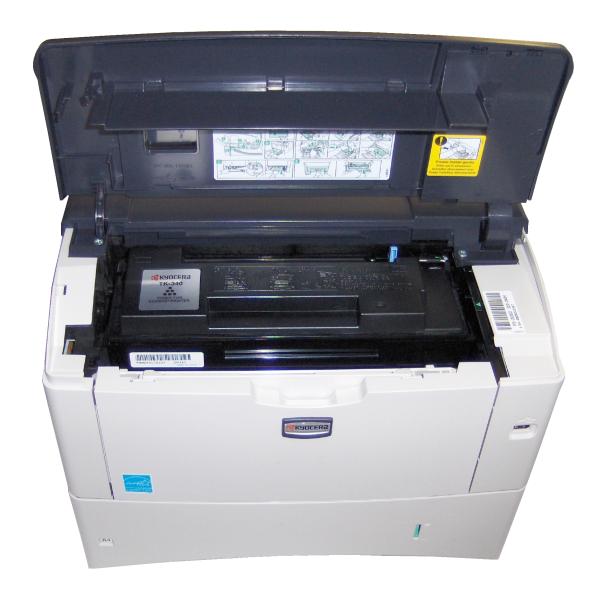 The quality of the prints produced was good. Text is light, but fully formed and clean, with no signs of spatter. Greyscale graphics are a little mottled, so not quite as smooth as from the Xerox, but the photo test is smoother, and we saw no signs of the micro-banding the Phaser produced.


Kyocera Mita makes great play of the fact that its printers’ photo-conductor drums last the lifetime of its machines. This is mainly due to Kyocera’s background in ceramics. The drums in its printers are so hard they suffer much less wear than rival consumables, so all you’re paying for to run the FS-2020D is toner.


This doesn’t automatically make it a cheaper printer to run, of course, as it depends on the price of the toner cartridge, but in this case it does have low running costs.


Kyocera Mita’s new range of mono lasers, the FS-2020D, FS-3920D and FS-4020D each have their own toner cartridges, rather than sharing a common one. Kyocera Mita says this is to make counterfeiting harder, but it also means any business using more than one model will have to hold extra consumables, so there’s no advantage to the customer.

This is a good, medium-range mono laser, which produces good quality text, though only average greys. It’s easier to run than many printers, as it has capacities commensurate with its target market, but it is quite costly to buy. Although running costs are low, it’s not quite as cheap, overall, as its maker might like you to think.