Multifunction laser printers are all the rage and it’s a pretty simple move to stick an A4 flatbed scanner on top of an existing mono laser printer to produce one. With a bit of fresh tooling to produce a different case design and the firmware to handle the scan and copy functions, companies can charge a premium for the extra functionality in the new device. Kyocera Mita has a range of multifunction machines, based on a similar engine to its FS-1030 laser printer, and the entry-level model is the FS-1118MFP.


Don’t be fooled by the number of pictures of this machine with an Automatic Document Feed (ADF) on top of its scanner. While this is an option, you have to pay extra for the FS-1118MFPDF, or upgrade with the DP-100 Document Processor, to get it. The basic machine has a simple cover for its A4 flatbed. 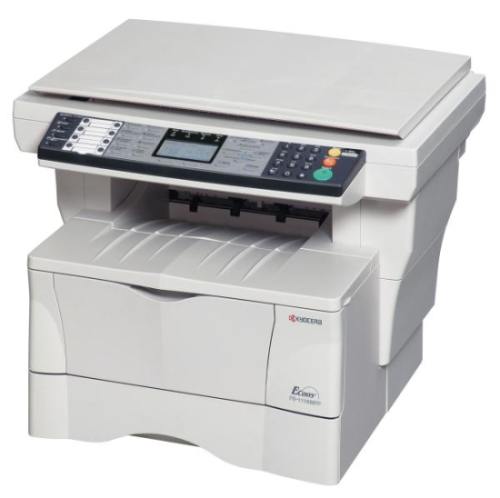 You also don’t get the fax functionality in the basic machine, and have to add it via another option, though the buttons on the control panel are, of course, already there. This may be one of the reasons that the control panel looks a bit crowded, but another is that there are several extra functions on the machine, not seen on some of its competition.


There are functions to collate and combine jobs when scanning or copying, for example. You can place up to four pages on the scanner flatbed one after the other and have them combined into four miniature thumbnails on a single sheet. The large, backlit, 5-line by 20-character LCD display enables quite a bit of information to be shown at once and eases some of the complexity of the controls.


Paper feeds from a 250-sheet tray at the bottom of the front panel – a second tray of the same capacity is another option – or from the 50-sheet multi-purpose tray. There’s a good gap between the printer and scanner sections of the machine, so collecting printed jobs is not a problem.


At the back are sockets for USB 2.0, Ethernet networking and parallel connections, though there’s no socket for a USB drive, so walk-up printing is out.


The drum and toner cartridge slides into the printer section of the FS-1118MFP, once you’ve lifted the top cover and folded down the front. It’s a bit fiddly to locate, but with the long service life of cartridge and toner, it won’t need to be disturbed often.


As well as the printer driver, Kyocera Mita supplies a copy of Nuance Paperport 9, which handles scanning and document handling and includes built-in OCR facilities.

Kyocera Mita claims a top print speed of 18ppm for the FS-1118MFP, but with each of our five-page print tests taking 28 seconds, we only got 10.7ppm out of the review machine. When we increased the prince run to 20 pages, however, the test completed in 1:17, or 15.6ppm, which is encouragingly close to the maximum.


A single-page copy from the flatbed glass took just 11 seconds, a very good time and one which means small copy jobs will hardly hold you up at all. A 15 x 10cm photo print finished in 18 seconds, which is also a very reasonable time. 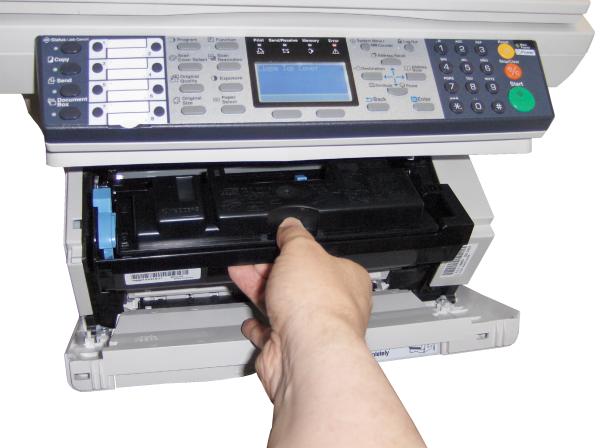 The print quality, given the machine’s default resolution of 600dpi, is very good. There’s very little banding, good detail in darker areas and a smooth gradation from dark to light in the sky of our test image. Kyocera claims an effective resolution of 1,200dpi through resolution enhancement and our print sample supports this claim.


Other printed output is also good, with jet black text looking sharp and clean and greyscales well differentiated between shades. A photocopy didn’t do so well with tints, producing some blotchiness in both light and dark shades, but black text was again well reproduced.


Kyocera uses a life-time drum unit, or at least one with a service life of 100,000 pages, which should give a good five year’s use. A toner cartridge clips onto the top of the drum cartridge, offering 7,200 pages, though the ‘starter’ cartridge supplied with the machine is only rated at half this.

Although the toner cartridge costs the best part of £60, the cost per page, including 0.7p paper cost, is just 1.61p. This is a low page cost, though not the lowest we’ve seen and not even the lowest from a Kyocera Mita printer.


Kyocera Mita’s FS-1118MFP is a good, general-purpose office multifunction machine. If you don’t need colour, its reasonable print speed and better than average print quality are coupled well to a low cost per page. The price, even at discounted levels, seems a little high in comparison with other machines of similar specification, though. Moreover, the lack of ADF and fax facilities in the basic machine makes some of those competitor offerings appear more attractive.