Kyocera manufactures a full range of laser printers, all based on the concept of a printer that only ever needs toner to keep it going. The drum unit is a lifetime component and the company claims costs of well under a penny a sheet for pages printed on its newest machine, the FS-1030D.


This is a personal laser printer which can print duplex pages (both sides of the paper as a single job). It’s an evolutionary product, developed from the FS-1020D, but with several notable improvements. For a start, it’s a bit smaller, mainly in height. The case, designed by FA Porsche, still has its trademark indent in the front, but in other ways it’s pretty much a squashed cube.


There’s a 250 sheet paper tray, which pulls out from the bottom front and above that a 50 sheet multi-purpose tray. The MP tray folds down from the front, but sits at quite a steep angle when in use. This reduces the footprint of the printer, but makes access a bit more awkward. The tray feels quite flimsy, but it worked without problem during testing. 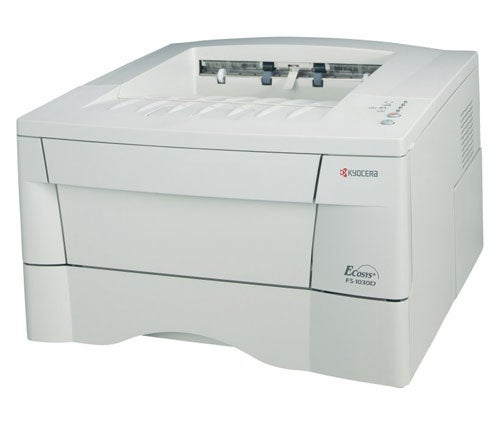 On the top panel, the only indication of status is a line of four LEDs, two green and two orange. The printer makes use of these in sequence, as well as individually, to show things like the printer initialisation. During most of the printer’s life they are there to show power, data, paper out and low toner.


At the back of the FS-1030D are sockets for USB 2.0 and parallel connections. There’s no network adapter as standard, but this is available as an optional extra. You can also add a second 250-sheet tray and put the printer on a Kyocera stand, complete with cupboard for storing paper and consumables.


A flap at the front of the printer lifts to take the toner cartridge and this is a simple drop-in fit. When you’ve added toner, the printer performs a one-off initialisation where toner is fed through the machine; this takes around 15 minutes.


Installing the driver is simple enough, though unusually you have to connect the printer first and select the right driver from a library of Kyocera’s entire range. The software should be able to select the right model for you.


Kyocera claims 22ppm in draft mode for the FS-1030D, a slight increase from the 20ppm of its predecessor. Under test, we saw around 12.5ppm for our text document, in normal print mode. This is slightly closer to the manufacturer’s claim than most printers under test achieve.

Duplex printing of a 20 page document completed in two minutes three seconds, giving a typical print speed of 10 pages per minute, only a small drop off from the single-sided print speed. The mixed text and graphics print finished in just 10 seconds, aligning well with Kyocera’s claim for first page out. Finally, the 15 x 10cm photo print came out in just 14 seconds, another very good time.


The quality of all these prints is good. Emboldened text comes out dense and black, while normal text, even in quite small sizes, is clear and finely printed, with no sign of toner spatter. Business graphics, such as organisation chart symbols, come out cleanly, with only slight fluctuation in areas of continuous tone. There is little sign of banding. 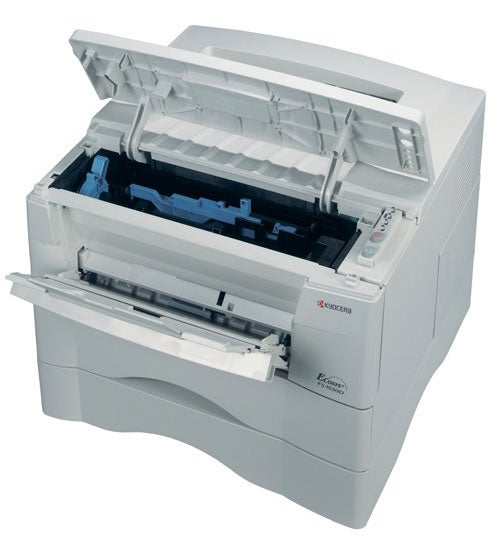 Photo output, never a strong point of mono laser printers, is better here than with most machines. Printed at the FS-1030D’s top resolution of 1200dpi, detail is good. Areas of sky are reproduced without noticeable banding and detail in shadows is surprisingly good. Foreground detail is sharp and precise.


Kyocera likes to point out at any opportunity that its printers are cheaper to run than the competition. By using a lifetime drum, which doesn’t need replacement, you only have to consider the cost of toner. At under £60 for a 7,200 page cartridge, print costs work out at 1.27p per page, including 0.4p for the paper and VAT. This is indeed cheaper than many printers in the same bracket and between 0.5p and 1.8p per page less than typical mono lasers we’ve reviewed recently.


The FS-1030D is a well designed printer which demonstrates improvements in print speed and running costs over the FS-1020D. It’s also a little smaller, which is no bad thing. Some of the covers and trays feel a little flimsy and it remains to be seen how well it stands up to general office wear and tear. With that proviso, this handy duplex printer can be recommended.