Koss is well known for its range of reasonably priced after market headphones, microphones, and speakers, in fact its £21.99 Porta Pros are Benny’s office headphone of choice. However, Koss has never really taken the step up into the high-end that companies like Shure, Ultimate Ears, and Etymotic Research currently dominate, that is up until now.


With a list price of $99.99, the KEB79s are four times the price of the next most expensive in-ear headphone that Koss offers and are squarely aimed at the likes of the Shure E110s, which although at the bottom of Shure’s range are still a huge improvement over anything you’re likely to get bundled with your MP3 player. Also, given Koss’ reputation for making very bass heavy products, the KEB79s could be the choice for those that like their music to have more than just a metaphorical punch but can’t afford the likes of the Ultimate Ears triple.fi Pros.

Off the shelf, there’s no denying they look the part with their dark and moody box being suitably eye catching yet oozing class. However, I can’t deny I was a little disappointed when I first saw what was contained therein. While even the budget SE110s come with a good sized carry case that will fit headphones, extension cable, spare tips and cleaning kit with ease, the KEB79s come with a tiny snap shut pouch that at best is fiddly to use and at worst is simply not big enough to carry everything. In fairness, this is a relatively minor point and I wouldn’t call it a deal breaker. However, there are a number of other equally small, shall I call them, differences that could just tip the scales one way or the other. 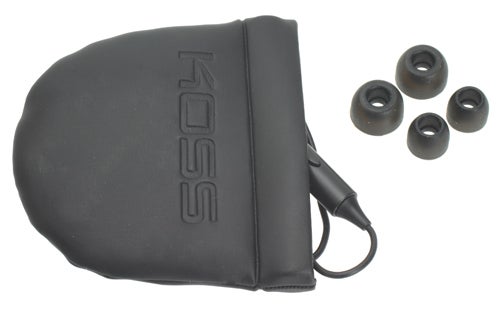 First up, the lack of a cleaning implement makes keeping your earphones in peak condition that much more of a pain. For the extra 10p (surely it wouldn’t be more than that?) it would cost to include one, I think most people would be glad to have it rather than not. Also of concern is the exclusive use of silicon tips that, although available in three different sizes, are not some peoples’ preferred choice – I generally find foam tips give a better seal and less noise transition from cable knocks. Finally, the phones aren’t exactly built for abuse with fairly thin cables being used throughout. That said, even the hardiest of earphones will fail if incorrectly used, and much of the longevity comes down to how you look after them. So as long as you make sure that you wrap these up properly and store them in their pouch, they should last you a while.

The earpieces themselves are quite small so should easily fit in the smallest of ears and their lightweight construction means they won’t cause earache after prolonged periods of use. Also, they don’t sit very deep in the ear so don’t fatigue the ear canal like some deeper insertion foam tipped models. On the flipside, this means they don’t block out as much noise and the murmurings of office chit-chat could easily be heard when listening at low volumes. In fact, an in-line mute control enables you to reduce music to near silence and you can easily have a quick conversation without removing the earphones – very convenient in an office where you’re allowed to listen to music. Ultimately, though, if cutting out ambient noise is a major concern when buying your headphones, the KEB79s should probably be avoided.


The cable is split up into two sections with a short (approx one foot) section, containing the earpieces and inline mute control, which is perfect for use with arm band mounted MP3 players and mobile phone headset extensions. A second three foot long extension is also provided so there’s plenty of length to get from your ears all the way down to the depths of your trouser pocket. The cable to the left ear piece is very short while the one to the right is much longer and is meant to be wrapped round the back of the neck to keep it out the way. As someone with long hair, I just find this inconvenient compared to two equal length cords running straight down the front but this is purely a personal preference (I have to agree with you there – ed.). 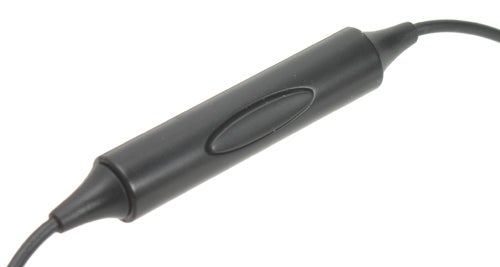 So on balance, the overall package may be just a nod behind the Shure E110s but really the ultimate test comes down to how these earphones sound and in that regard it’s a very close call and one that also largely comes down to what sort of sound you prefer.


First and foremost, these most definitely offer a far superior listening experience to the earphones you’ll get bundled with your MP3 player, well most MP3 players at least. Bass is fuller, huge in fact. So huge that at times they come close to sounding unbalanced and slightly muffled – much like when you hear a set of surround sound speakers with the sub volume set too high – and they take quite a lot of volume to drive them. At very high volumes with bass heavy music this does lead to a loss of clarity as the single driver is stretched to its limits, however the majority of the time they hold up very well indeed.

Compared to the SE110s the sound is slightly more closed feeling, lacking the sense of space that the thinner sounding Shure headphones create, especially when listening to classical music. However, the Koss set sounds fuller and, if I had to use one word to describe the difference, I’d say they sound warmer.


This is shown to great effect when listening to my old recordings of Chopin’s Nocturnes, which, because of the low volume they were recorded at, need to be cranked up to the point where the tiniest recording defect can be heard to fully capture every subtlety of the music. With a truly high quality pair of earphones the experience is seamless and just closing your eyes is enough to transport you back in time. However, the KEB79s sound slightly detached in comparison. That said, to get a significant step up in clarity you’re looking at spending well over £100 and the KEB79s are still pleasant to listen to.


Completely changing tack, Slam from the album Hold You Colour by Pendulum is an all out drum and bass assault that really shows what these headphones were made for. Short of forking out for a pair of dual, or triple driver phones, you are unlikely to find anything that can give your head such a thumping – in a good way of course. Equally impressive is the way they handle the contrast of the surprisingly powerful beats and angelic vocals of Lily Allen on the song Smile. The bass is far smoother than on the SE110s and the whole sound is more cohesive though, again, it does suffer from a loss of clarity when the bass really kicks in. 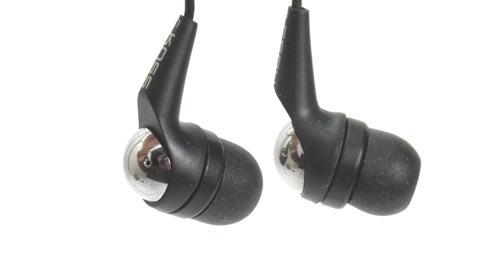 Ultimately, Koss is known for providing earphones and headphones that pack a solid bass punch and the KEB79s are no exception. Where they differ from their cheaper siblings though is with a much greater emphasis on clarity as well. However, there’s no getting away from the fact that emphasising the bass can create a slightly boomy and unbalanced sound. They’re not worse than any other headphones that can be had for around £50 but their sound is distinctive and the choice really comes down to whether you prefer the extra bass or the lighter more even tone of alternatives like the Shure E110s. It’s also worth remembering that the excellent Shure SE210s can be had for as little as £69 – worth saving a bit harder for? I think so.


Releasing its most expensive earphones to date, Koss has created a very competitive set that will improve upon anything you get bundled with your MP3 player. Their sound is distinctively bass heavy and some may prefer the lighter touch of the Shure E110s, however at around £50 they’re certainly worth considering.