Kodak has come a long way since it launched its EasyShare 5000 range of inkjet all-in-ones back in 2007. Then it was breaking into a mature market and some commentators wondered if it would ever be a major player. The release of its third generation of machines, after the EasyShare and ESP models, shows how far the company has come.

At the launch of the hero range, Kodak showed data from industry analysts GfK which gives it second position in both value and unit sales in Britain. Although it’s still some way behind HP, the company has done well to steal share, mainly from Epson, and rise to this position. It’s advertising campaign, which majors on low running costs, must be getting through. 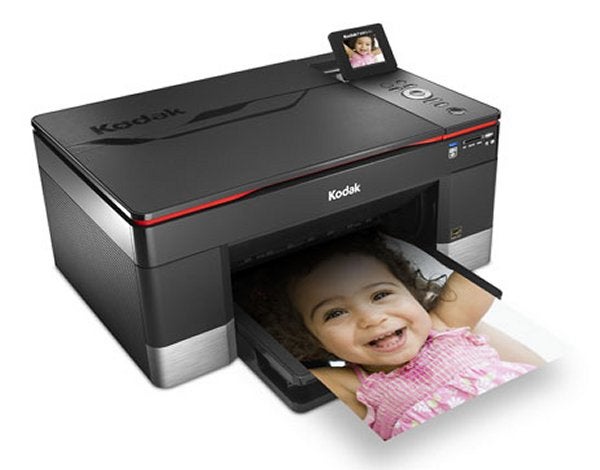 The hero 5.1, the entry-level machine in the new range, is pitched at just under £100, which is not a budget purchase, but the ESP  C range will continue in parallel, for those with less in their pockets.

The industrial designers have been in at Kodak and the new machines all have a more angular, square-cut look, which is smart and functional. The highlight under the scanner lid, which has been Kodak orange for years, is now Kodak red and the flip-up 61mm LCD sits to the right of the scanner, behind a very simple control panel.

With a navigation ring and seven clearly-labelled ancillary buttons, it would be hard to get confused using this machine. Just under the front lip are two slots, one for SD and MemoryStick cards and the other for USB and PictBridge connections. All very convenient. 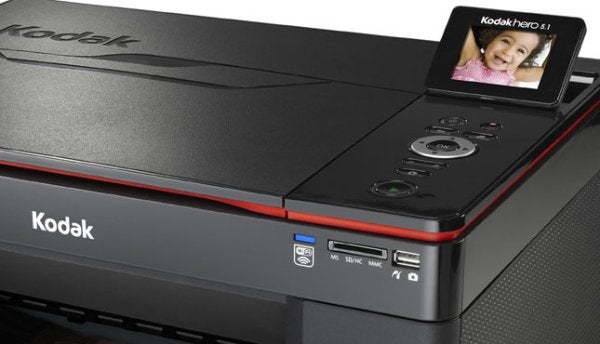 There’s a single paper tray at the front, which can take up to 100 sheets of plain paper, or around 20 photo blanks. The paper feeds out to the front, too, but you need to extend the support in the paper tray lid and flip up the stop at the end.

The printer supports both USB and wireless connection, but wireless is favourite, as it also gives access to Cloud printing. This is the big selling point of the hero range, as it provides access to the printer from all sorts of phones and tablets. Rather than going the proprietary route, as HP did with ePrint, Kodak has tied up with Google, so with a Google account you can send e-mails directly to the printer.

We tried this and it certainly worked from our Samsung Galaxy Mini, though the limitations on controlling size of prints, number of copies and other things you’d normally find in a print driver are absent, as they are with ePrint.

Kodak rates the hero 5.1 at a pragmatic 8ppm in black and 6ppm in colour, but our five-page black text print only managed a numerically appropriate 5.1ppm. When the printer was given its head on our 20-page document, though, the speed increased to 6.1ppm and in the very respectable-looking draft mode, we saw 8.8ppm.

The printer supports duplex print as standard and the pigmented inks Kodak uses mean the printer doesn’t have to wait so long between sides, but even so our 20-side document took 3:16 to complete, a speed of 3.7 sides per minute.

The five-page black text and colour graphics document returned 3.6ppm, not that close to the 6ppm specified, but a single-page colour copy took just 31s and 15 x 10cm photos took between 38s and 50s, all impressive times for this class of machine.

A photo sent through Google Cloud Print printed as a borderless A4, but came through in a respectable time, once it started printing. However, remote prints need to move across various servers, so the start of print can be a minute or so after the e-mail is sent to the printer. 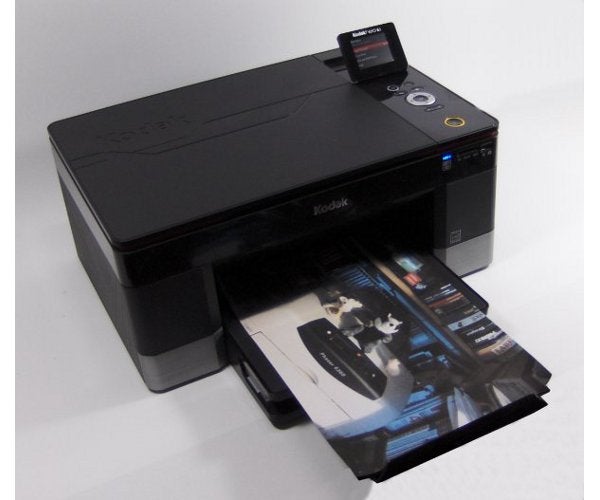 Print quality, from the four Kodak inks, is generally good, with reasonably clean and clear black text and a remarkably well-formed draft mode. Colour graphics are zingy and unblemished, while photo prints are clear and bright with natural colours and good definition.

Duplex pages were inexplicably reduced in size, compared with single-sided ones and some headers were foreshortened, so you may need to check the header and footer margins on your double-sided documents.

As with previous Kodak machines, running costs are low, though black print comes out at 2.6p per page, which is slightly higher than, for example, the https://www.trustedreviews.com/epson-stylus-sx235w_Printer_review Epson Stylus SX235w, at 2.2p. When it comes to colour print, though, things are very different. The Kodak hero 5.1 manages 6.0p, while the Epson costs 10.7p. 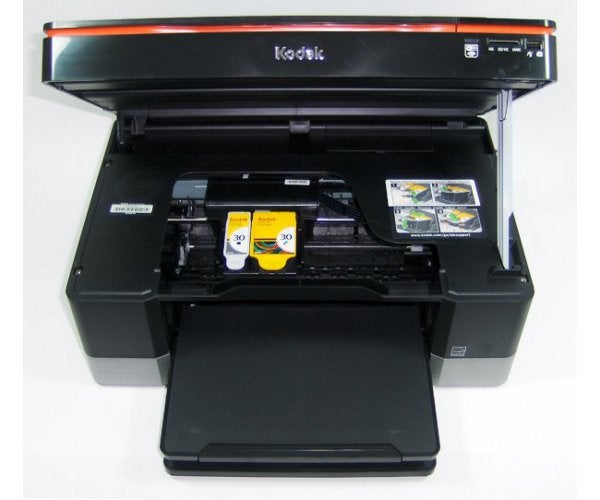 Verdict
Kodak has consolidated its position well with the introduction of the hero range and although this is the entry-level machine, it’s well specified with duplex print, card and PictBridge sockets and a decently sized LCD. Print quality is well above average and speed is also fair, so heros look set to continue squeezing other manufacturers in the crowded consumer all-in-one marketplace.