If Kodak’s ESP 3250 is equivalent to an ESP 3.25, the ESP 5250 is like an ESP 5.25. It takes the earlier machine and gives it a tweak, specifically adding wireless connection. This is an extra convenience, but it’s about the only improvement over the older machine. 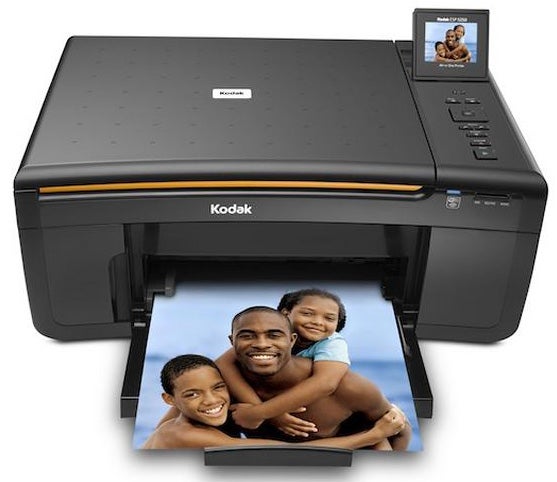 The ESP 5250 is a very similar machine, physically, to the ESP 3250, with the same case and print engine. It provides a paper feed from the front, once you’ve folded down the front panel hatch and extended the paper support, and pages again turn through 180-degrees, ending up in a pile on top of the feed stack.


Comparing it with the ESP 5, however, there are a few things missing from the ESP 5250. For a start the hinged LCD monitor behind the control panel has a 61mm diagonal, while the ESP 5’s is 76mm: 25 per cent larger.


Then there’s provision for reading memory cards and connecting devices. The ESP 5 has sockets for SD, MemoryStick, xD and CompactFlash cards. The ESP 5250 drops the CompactFlash slot, which probably won’t disturb too many people, but also drops the front panel USB socket, which works with PictBridge cameras and USB drives. This socket can also take an optional Bluetooth adapter on the ESP 5, where there’s no provision on the new machine. 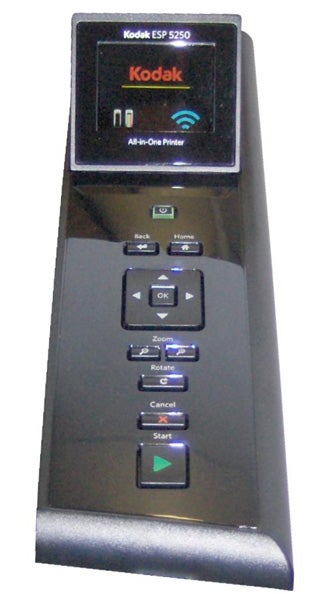 Physical setup is very straightforward. The semi-permanent print head clips into the head carrier and the two ink cartridges clip just as easily into place in the head. The printer does its own head alignment and is then ready to go.


Networking is similarly easy, working in similar fashion to connecting to a Wi-Fi network on a laptop. All you need do is follow the instructions on the LCD display, search for available wireless networks, select the one you want, enter the passcode from the on-screen keyboard that pops up and the printer’s on the network. After that the driver software then spots the printer and completes the connection.

Given all Kodak’s ESP models use the same print engine, there’s a surprising amount of variance between the ESP3250 and the ESP5250, with all the times in favour of the more expensive model. The plain paper prints are all within a couple of seconds of each other, with the five-page text print taking 1:04, a speed of 4.69ppm, the 20-page large document taking 3:57, or 5.06ppm and the five-page text and graphics document coming in at 1:42, which is 2.94ppm – all reasonable speeds for an inkjet all-in-one, but nothing monumental.


It’s when you look at the copy and photo print times, things get a bit different. While the ESP 3250 completed a single page colour photocopy in 46 seconds and a 15 x 10cm photo from SD card in 58s, the ESP 5250 took 32s and 43s, respectively. These represent speed increases of 43 per cent and 35 per cent, one reason at least for paying extra for this machine. 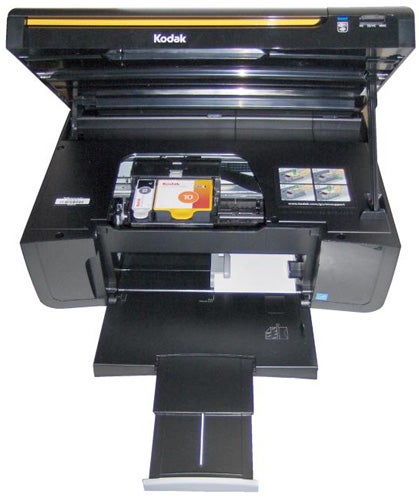 Output quality is as good as from any of the ESP machines, with generally sharp black text, though on this machine it suffered from under-inking, which meant that some of the paper fibres showed through and gave the text a dark grey feel, rather than a dense black.


The same problem is noticeable in areas of block colour, where the white paper fibres lighten the colour shades, which could use more ink. This is exacerbated in a colour copy. Surprisingly, our standard photo print is not as good as from the ESP 3250 and in this sample, some of the dark colour detail is lost to black. Otherwise, colours are pretty accurate and photo prints on Kodak paper – there are three different grades available – are well above average.


Kodak makes impressive claims for the economy of this and all its other all-in-one printers. The headline figure of 7p per 15 x 10cm print can be achieved, by using the Photo Value Pack, which provides paper and ink for 180 prints, but the standard photo paper is very thin and you may want to go for the Premium offering instead, which takes the cost per print to 10p. Still pretty good.


Plain paper prints also come out cheap, with an ISO black print costing 2.65p and a colour one costing 5.46p, both including 0.7p paper costs and VAT. These compare favourably with other machines at similar price points. For example, the £120 Lexmark Interpret S405, which costs 4.7p for a black page and a whopping 11.83p – twice the cost of the ESP 5250 – for colour, based on the same cost calculation.


When you compare the ESP 5250 with its immediate predecessor, the ESP 5, you can see you pay highly for the wireless connection. You lose CompactFlash and USB/PictBridge sockets and have to live with a considerably smaller LCD screen. At Internet prices you pay the best part of £30 extra for the privilege, too. Ultimately you’d get better value buying the ESP 5 and adding a separate wireless adapter.