A couple of years ago I remember a distinguished academic making rather a clot of themselves in the public media by claiming that the advent of digital photography meant the end of recorded history, because people would no longer take photos that would be kept as treasured heirlooms for generations. As the explosive growth of blogs, cellphone photos appearing in national newspapers and on TV, and the era of “citizen journalism” has shown, if anything digital photography has meant in fact that more history is being recorded and widely distributed than ever before. 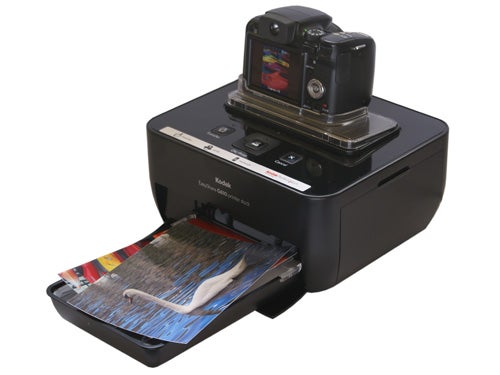 However that hysterical historian did have one valid point. Out of all the millions of digital photos that are taken every day, only a very small percentage will ever be printed. Although you, the discerning TrustedReviews reader, are an enlightened and technologically aware person, capable of building a PC from scratch in an afternoon, there are a great many people out there who not so at home with technology. These people are the reason digital cameras have an “Auto” button, often painted in calming green with a nice smiley face on it. For these people, downloading photos onto a computer, assuming that some well-meaning relative has bought them one, is an insurmountable and terrifying task, and the very notion of them successfully printing their photos on an inkjet printer is laughable.


For these people, Kodak developed the EasyShare system. Early last century Kodak pretty much invented simple snapshot photography for the masses with its easy-to-use Box Brownie cameras, with the motto “You push the button, we’ll do the rest”. This is an ethos that the company has brought with it into the digital era, and all Kodak digital cameras have a shiny red button labelled “Share”. 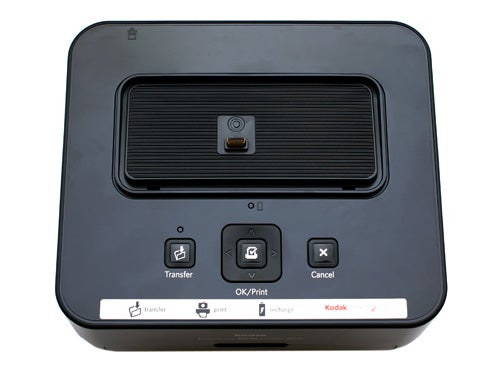 As well as the EasyShare camera range, Kodak also markets a range of home photo printers that are also designed to be extremely easy to use. All the cameras in the EasyShare range are sold with a simple plastic adaptor, which fits into a socket on the top of the EasyShare printer and allows the camera to dock with the printer directly via a special USB connector socket in the underside of the camera. In some case it also charges the camera battery. The “Share” button on the camera is used to tag favourite photos for printing, so when the camera is docked to the printer these files can be printed quickly and easily.

The E610 is the latest of Kodak’s EasyShare printers, and to see if it’s as easy to use as Kodak claims, I asked for one along with the C743 and Z712 IS cameras which I reviewed last week. Both of these models come with printer dock adapters that are compatible with the E610. 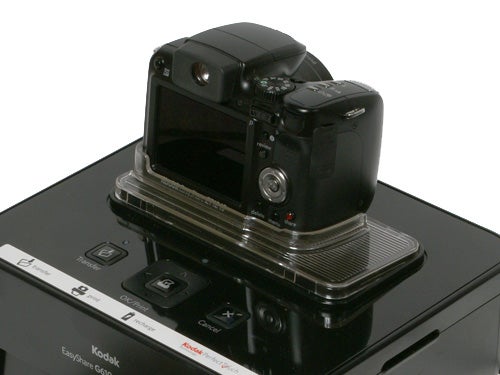 The E610 is a dye-sublimation printer, and limited to 6 x 4 inch paper size. Dye-sub printers usually produce very high quality long-lasting prints, but because they use a non-refillable ribbon cartridge and special paper they can be expensive to operate. Replacement paper and ribbons are sold in packs, costing £29.99 for 100 sheets, or £39.99 for 200 is bought direct from Kodak. This works out at roughly 20p per print, which is expensive even for a dye-sub. The E610 printer itself costs £129, although it is available for just £49 if bought as a bundle with a Kodak camera. Considering you can get a good inkjet photo printer for about £80, which can also print photos at A4 size, as well as printing out letters and other documents, what possible reason could anyone have for buying the E610?


Simply this: I got the thing out of the box, and without even glancing at the manual I slotted in the paper and ribbon cartridge, popped the Z712 on top and printed out a photo, all in about five minutes, and that includes the one-and-a-half minute printing time. It really is almost ludicrously simple. The E610 is designed to operate as a stand-alone unit, and does not need to be connected to a computer. It does have a USB socket on the back, and can be hooked up to your PC if you want, and comes with the easy-to-use EasyShare software suite that is also included with the cameras, but it doesn’t have to be used with a PC, which will come as a huge relief to the technophobes. 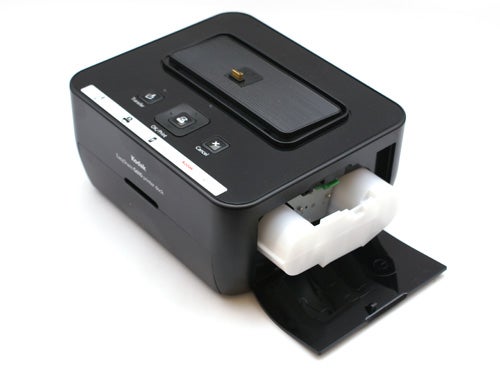 Since no PC photo editing is required, any picture editing required must be carried out in the camera menu before printing. Most modern Kodak cameras include the ability to crop and rotate the picture in playback mode. The number of copies of a particular picture to be printed is set when the “Share” button is used, and that information is used by the printer. When the camera is connected to the printer, a simple four-way control allows the user to scroll through the pictures stored on the memory card and select which ones to print, or to simply print all of them. The only other option is a layout function, which allows two, four or nine pictures to be printed on the same sheet, although given the small size of the paper this is probably more useful for things like passport photos.


As I mentioned, printing the first photo takes about one and a half minutes, but drops to approximately one minute for subsequent prints, and the prints are dry and can be handled as soon as they are finished. Print quality is very good, with very accurate colour reproduction and excellent detail. The finished prints are indistinguishable from chemically-printed photographs from traditional film cameras. They are waterproof, stain-resistant, and Kodak claim that they will last a “lifetime” under normal display conditions, although exactly who’s lifetime is not made clear.

Although the E610 is expensive to buy on its own when compared to an inkjet printer, and has quite high running costs, for the technophobic home user who just wants good quality snapshot prints with the minimum of fuss and without having to use a computer it is an ideal choice, especially when used with a compatible Kodak camera. The bargain bundle price only adds to the appeal.