Kodak was always going to release two All-in-One machines. The EasyShare 5300, tested a couple of months back, left a good impression and is designed for the home market. The EasyShare 5500, reviewed here, is more a SoHo machine and comes with both Auto Document Feed (ADF) and duplexer for double-sided printing, as standard.


Again available only through DSG – PC World, Dixons Online and Currys – it comes in at £199, which is competitive with most of the opposition. Print costs, particularly for 15 x 10cm prints, come out at less than half the price of the other guys, though, at a true 7p per print.


The EasyShare 5500 has a very similar footprint to its smaller sibling and much of the hardware is shared between the two devices, too. For example, the same arrangement of A4 paper feed tray with a 15 x 10 centimetre photo paper tray set in above it, sits at the front of both machines. You switch paper sources by pushing or pulling the photo paper tray forwards and backwards. 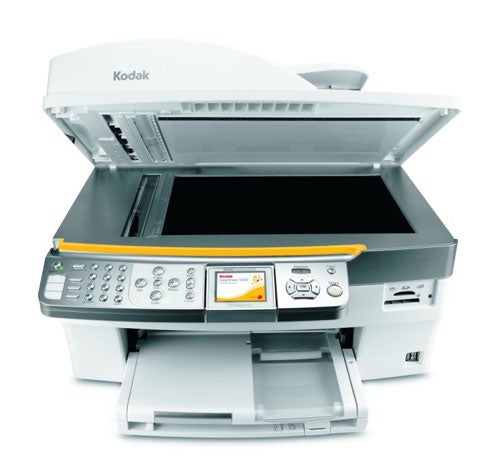 The same twin memory card slots cater for all the common types of card and a pair of USB 2.0 sockets at the bottom can either be connected to a PictBridge camera or can take an optional Bluetooth adapter or memory drive.


The control panel juts out from the front of the machine, but doesn’t run its full width, to give you better access to memory and USB sockets below. It includes an array of illuminated function keys for scanning, copying, printing photos and faxing, as well as a square of navigation keys, with OK in the centre. There are Start and Cancel buttons and a number pad for entering fax numbers.


The main hardware differences between the EasyShare 5500 and the EasyShare 5300 are the duplexer and the ADF in the 5500. The ADF can take up to 35 sheets, making multi-page documents much easier to scan or copy.


The EasyShare 5500, like its smaller sibling, uses an external, power brick. The brick on our review sample made a constant twittering sound, as if it had a small bird trapped inside, for the whole of the test period. We hope this is a reasonably isolated problem, but the supply on the EasyShare 5300 also made odd noises.

The duplexer, for printing on both sides of the paper, is supplied as a separate accessory and needs to be clipped in at the back of the device, in place of the standard back panel. Also at the back are sockets for a phone line and a handset and for the single USB connection to a PC. There’s no Wi-Fi or Bluetooth as standard.


The same EasyShare and AiO Home Center software is supplied with this machine as with the cheaper model and offers the same, simple scanning and editing of images. It’ll scan a document to RTF as text, as well, but there’s little adjustment available – in fact there’s hardly any mention of the Optical Character Recognition (OCR) engine the file must go through. It either works or it doesn’t., though the samples we tried worked pretty well.


We found a few oddities while testing the 5500. Our five-page black print test document printed fine, but the 20-side, duplex one, which uses exactly the same pages reproduced four times, lost the tops of the page headers. This implies there’s a greater non-printable area when printing double-sided than when printing single-sided, a fact not mentioned in the 5500’s documentation. 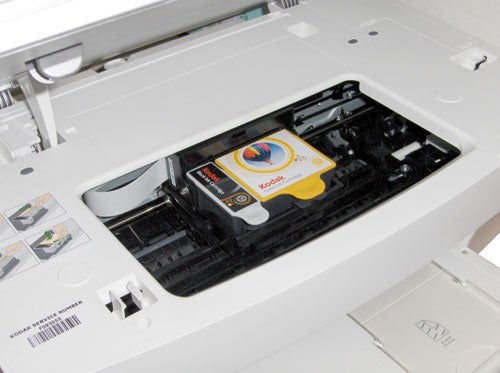 Secondly, the main A4 paper feed tray, which is claimed to take 100 sheets of 80gsm paper, wouldn’t take more than 90 sheets of ours. This is the same multi-purpose office paper we use for all printer tests.


Finally, one of the 15 x 10cm print blanks of Kodak Ultra Premium Photo paper (supplied in the box) delaminated when we printed on it. The top surface came away along one complete edge. This is probably an isolated incident, but together with the power supply chirrup, leaves a question mark over quality assurance.


Print times for documents were unaccountably longer than for the EasyShare 5300, with the five-page text document taking one minute 12 seconds, a speed of 4.17ppm and the five-page text and colour graphics coming in at two minutes 40 seconds, or 1.88ppm. The actual speed when printing is not that bad, but the EasyShare 5500 takes up to 30 seconds before starting to print, with lots of clunks and chunters as it prepares itself.


Using the duplexer to print double-sided pages meant our 20-side document took a coffee-brewing six minutes 32 seconds, equating to 3.06spm. Copying an A4 colour page took around 40 seconds, but this increased to between 55 seconds and one minute 19 seconds if the scanner was not already warmed up. Not a snappy machine.

Printing 15 x 10cm photos was a lot nearer the norm, with times ranging from 43 seconds to one minute and eight seconds, depending on source. The quality of these prints was pretty good, crisp and smooth with a good level of detail and well-balanced colours. Black text on plain paper was also clean and with little feathering or other fuzz-making attributes. Colour on plain paper suffered from the same lack of saturation as from the EasyShare 5300, though, and white fibres were obvious in areas of solid colour. Colour copies were closer to the originals than from some competitors.


Some of Kodak’s rivals have claimed the company can offer its headline 7p per print consumable cost by charging more for the All-in-One itself. A quick look round similar machines, though, such as the HP Photosmart C6180 all the Canon PIXMA MP530, shows that most of them sell at around £200, within a midge’s beard-hair of the EasyShare 5500. 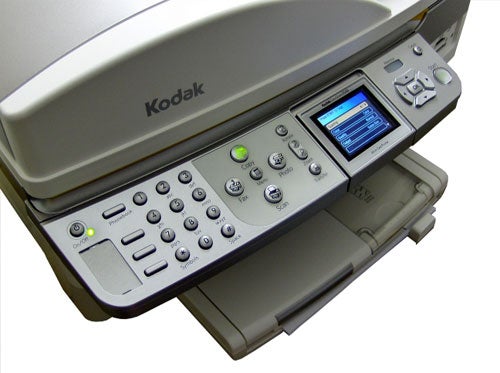 To reach a cost of 7p per 15 x 10cm print you have to use Kodak’s Photo Value Pack – not the Premium Photo Value Pack, mind – which costs £12.49 for 180 sheets of standard photo paper, and a colour cartridge. Do the maths and this, indeed, comes out at 7p per print.


Kodak claims its black cartridge can produce 349, ISO black pages, and under test we produced 334, which is within five per cent. From this, we calculate an ISO black text page to cost 2.82p, which isn’t that low when compared with other All-in-Ones at similar price points.


For ISO colour pages, we calculate a cost of 28.7p, including an A4 sheet of Kodak’s Premium Glossy Paper, which is pretty good. You can reduce the cost still further if you can live with standard photo paper, which Kodak prices lower.


This machine, at twice the price of the EasyShare 5300, is not as impressive as the cheaper model. While the ADF and duplexer are useful additions for office use, the scanner takes a while to warm up and the duplexer takes a while to turn the paper over and prevents the printing of headers close to the top of a page. Printing is slow, too and although the quality is quite good overall, it’s only the promise of low-cost photo prints which should swing you in its favour.