In a week where BT and TalkTalk lost their second high court appeal against the Digital Economy Act and the Game of Thrones season one Blu-ray went on sale nine months after the show ended it has once again highlighted the need for better online video services. DSG Group thinks it has the answer…

‘KnowHow Movies’ is the brainchild of the Dixons and PC World owner and it aims to go head-to-head with established players like Netflix and LoveFilm. The service was announced last week and launched just a few days ago. As such content remains limited (more of which later), but the business model is compelling: no subscription, pay as you go movies and TV to rent or download, content added on the day of release and playback on up to five devices per user account. 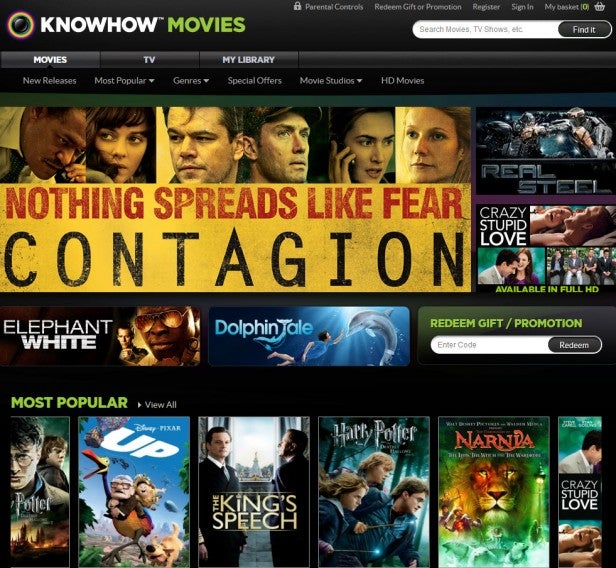 The kicker: DSG aims to bundle KnowHow Movies content and credit with everything from smart TVs to PCs, phones and tablets. With 600 stores nationwide, 19 million customers and sales of over 4.5m connected devices each year DSG may well have the clout to make it work. So the promise is there, but is it any good?

In a word: ”potentially”, so let’s start with the positives. Despite its age still being counted in days, the KnowHow website is clean, uncluttered and easy to use (though we noticed some glitches on IE8 which DSG confirmed will be fixed soon). Content is split into ‘Movies’, ‘TV, and ‘My Library’ with subcategories for ‘New Releases’, ‘Most Popular, ‘Genres’, ‘Special Offers’, ‘Movie Studios’ and ‘HD Movies’.  The main body of the site highlights major titles. 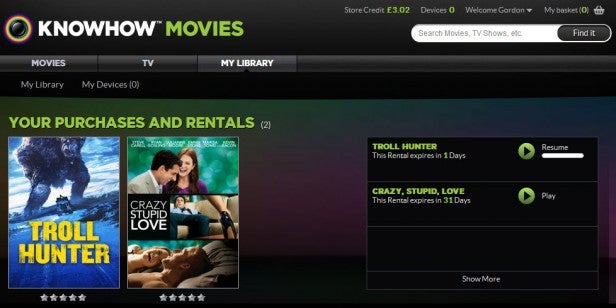 All content has a description, purchase options, certification information and a breakdown of cast and crew. User preferences allow parental locks to be enforced, additional devices to be activated or deactivated, the creation of Wishlists and the redemption of gift vouchers (a big part of DSG’s promotional strategy). Registering for the site sees it take billing details so purchasing content is as simple as clicking the relevant option (SD/HD, rent or buy – where available). Furthermore streaming content is done in the browser with additional software only required for downloads. High definition titles offer Full HD 1080p video and Dolby Digital 5.1 Surround Sound.

So how does it perform? This is another feather in KnowHow Movies’ cap. The platform is powered by Rovi (formerly Macrovision) which uses DivX’s adaptive streaming Plus Software to adjusts the bitrate in real time to avoid unnecessary buffering. This change in quality can be distracting, but clearly less so than having your content stop continually – especially if others are using your bandwidth.

In our tests we used 50Mbit Virgin cable and 3Mbit DSL connections (a 2.2Mbit minimum is quoted). Naturally the former was considerably quicker, but we did manage to stream SD reliably on the 3Mbit connection. As for adaptive streaming, we found we could do just about anything and not break playback on the 50Mbit connection, but while simultaneously using YouTube on the 3Mbit connection was a no go light web surfing wasn’t a problem. For even more erratic connections pausing the movie will allow it to buffer in the background, but those under the 2.2Mbit minimum would be well advised to steer clear. 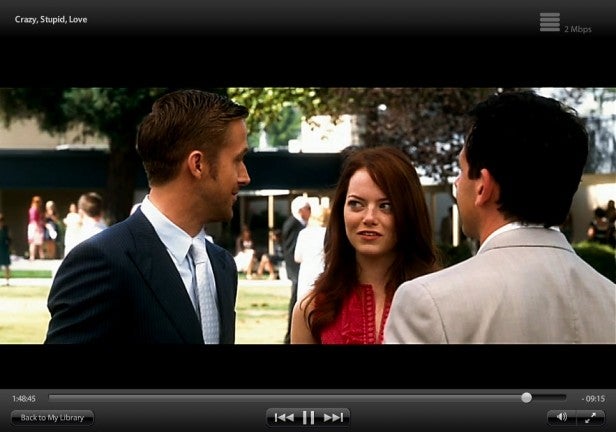 As for video quality we were impressed. HD is excellent with strong reproduction of colour and clear, distinct audio – it won’t obviously match the uncompressed quality of a Blu-ray disc and was a touch on the warm side, but it will still be good enough to wow the neighbours. When it comes to SD there is an obvious and expected drop off with dark areas in a scene noticeably lacking detail, but it looks no worse than the SD television the majority of the population still happily consume. For purists aspect ratios do vary, for example Crazy, Stupid, Love comes in its original cinema 2.35:1, but budget Norwegian hit Troll Hunter has been converted from its original 1.85:1 to a widescreen television friendly 16:9 and – in what we hope is a one off – is sold in a dubbed version.

So what about the negatives? The big fork in the road is KnowHow’s restriction of HD content to computers equipped with Intel Insider aka 2nd generation Core processors. As a result our Ultrabook was good to go, but our quad core, eight stream i7 870 CPU equipped desktop with clock speeds hitting up to 3.6GHz and a £350 GeForce GTX 285 graphics card that will happily make mincemeat of Crysis on its maximum settings was restricted to SD. This is frustrating and a potential deal breaker for many. An Intel Insider test runs on the site, but as a general rule if your computer is more than a year old HD will be off the menu. 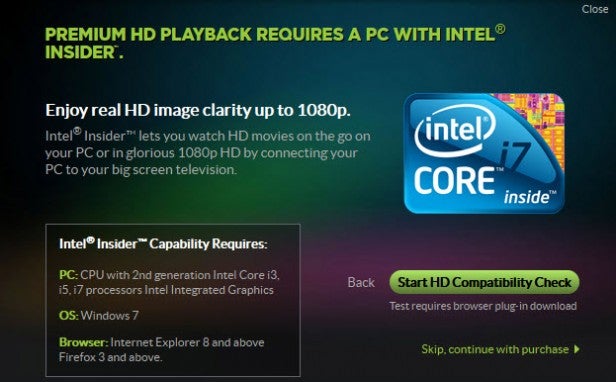 Secondly is the content itself. At launch KnowHow is currently movie only (TV is listed as ‘coming soon’) with films totalled in the 100s, not 1000s. A quick rundown of the IMDB Top 50 (as we did in our Netflix UK verses LoveFilm comparison) shows just two titles available (The Shawshank Redemption – admittedly #1, and Se7en). By comparison Netflix UK managed three titles and LoveFilm had six, hardly high bars themselves.

That said this negative may soon turn into a significant plus. A key promotion of KnowHow Movies is availability with “new releases will be added to the library on the day of release, meaning customers will have access to them as soon as they become available”. As such much of what is on KnowHow is newer than Netflix UK and matches Amazon owned 10 year old Love Film. Titles include Harry Potter and the Deathly Hallows Part 2, Contagion, Cars 2, Real Steel, Tron, Troll Hunter, The King’s Speech, Arthur, Pirates of the Caribbean: On Stranger Tides and Crazy Stupid Love.

In addition to its launch partners Momentum, Pixar, Warner Brothers and Disney, DSG claims it will make significant deals in the coming months with no studios off limits. What makes DSG confident of succeeding where others have so far failed is its physical retail presence where, for example, Sony Pictures movies can be bundled with Sony TVs using KnowHow Movies or free vouchers. This is a real differentiator and DSG claims it is a significant attraction to film studios.

Much like online music stores finally securing all four major music labels, we would hope for a breakthrough as it would obviously set a precedent for everyone else. Furthermore to show its commitment to the service DSG has pre-installed KnowHow’s download client on all computers sold through Dixons and PC World. As these stores tend to attract mainstream customers it could be a major step in attaining widespread user recognition both for it and other services of its ilk. 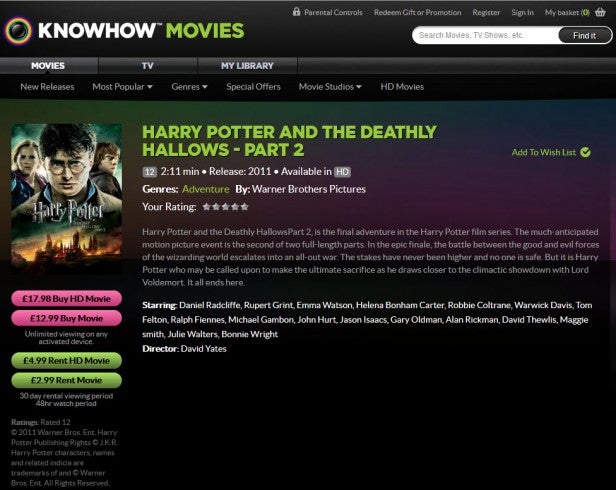 On the flip side where KnowHow movies is not breaking any new ground though is price. New titles rent for a reasonable £3.99 in SD and £4.99 in HD (viewable over a 48 hour period), but purchasing titles is still a DVD/Blu-ray rivalling eye watering £12.99 and £17.98 respectively. Obviously the studios enforce these prices, but downloads stand no chance until prices fall dramatically. Older movies meanwhile come in from £2.99 to rent and £5.99 to buy with TV shows £1.99 per episode.

Where KnowHow does offer something different to its rivals is in not requiring a subscription (no option is even available). This will dissuade heavy users who will find unlimited NetFlix UK (£5.99pm) or LoveFilm (£4.99pm on promotion) packages cheaper, but is it clear KnowHow is targeting the mainstream and this no strings approach could be key. 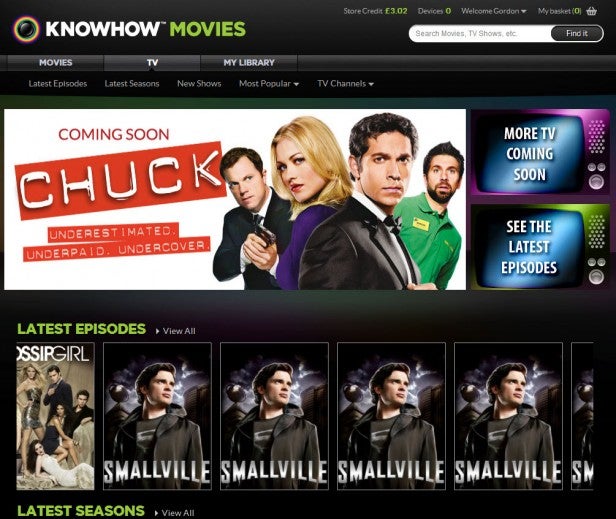 As if to hammer home this technophobe priority KnowHow also currently lacks apps. Its registration of up to five devices for user account is certainly a big step forward, but this will be limited to PCs (rental and download) and Macs (rental only right now) until Android, iOS and smart TV apps arrive “within the next six months”. The good news is streaming progress will sync between devices so where you left off on one can be resumed from that point on any other.

”’Verdict”’
Ultimately we would call KnowHow Movies a work in progress, a label we’re sure DSG not only accepts but, given its lack of subscription options, actively promotes. As such its initial role will be as a pay-as-you-go-style service for casual users lured by its new titles as opposed to a vast library. Credit must go to KnowHow’s business model: five registered devices on a single account is generous and its adaptive streaming technology makes viewing more reliable on slow connections. In reality the time to judge KnowHow Movies will come in six to 12 months when more deals are inked and apps are out. We can’t give a Recommended Award on potential alone, but we do like the beginnings of what we see.