It’s slightly disappointing that after the wonders of the Image X10 and Custom-3 earphones from Klipsch the Image S4 ‘phones fall short of being revolutionary. I’m not suggesting for a minute that they’re not good, because they are, but unlike the Image X10s which were ludicrously light while still sounding awesome or the Custom-3s which gave the Shure SE420s a real run for their money at close to half the MSRP to be listening to a pair of Klipsch ‘phones which are merely very competent seems a bit of an anti-climax.


That said, for the £60 being asked for the Image S4s I’m probably pushing my luck expecting miracles. Agreed, you could get an entire MP3 player with built-in earphones – in the form of the Sony NWZ-W202 for £60 but the comparison isn’t really fair.

The Image S4s aren’t much to look at but they’re not awful. The design is fairly stylish, I suppose, with its combination of shiny black and silver plastic. Obviously the metal casing of the Image X5 and X10 ‘phones is preferable, but the S4s stand up in comparison to Apple In-ear Headphones; in my eyes anyway.


The earpieces are pleasingly lightweight, but seem more prone to falling out of the ear than both the X10 and X5 Images. That isn’t helped by the provision of only a too-large (for me at least), small or too-small double-flanged tips. A medium pair would have suited my ears perfectly but the small tips were okay with a little wiggling to wedge them in place. 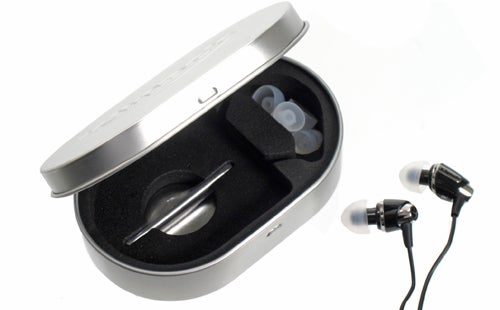 Furthermore, while the design looks okay, there’s a slight budget feel to the Image S4s, the thin cable doesn’t seem as if it would cope with much stress and I wouldn’t want to put the ‘phones in a pocket I was going to sit on. Not that I would do that with any other earphones as a matter of course, but if it happens by accident it would be nice to think it won’t cost £60 in replacements.


Also included with the Image S4s is a metal case for transportation, which holds both the silicone tips and an earwax removal tool. It’s a pretty sparse offering, but that’s par for the course at this price point. The tin at least feels rigid enough to survive in a backpack should you wish to store your earphones there when not in use.

Any concerns that the physical appearance of the Image S4s may have inspired are quickly assuaged in use. They sound much better than I had expected considering the asking price. On par, in fact, with the likes of Shure’s SE115 earphones, which cost some 50 per cent more – not an inconsiderable difference. 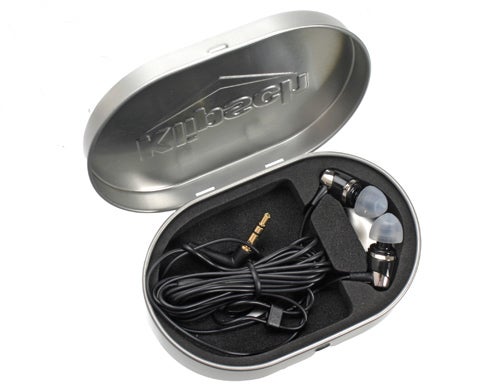 It’s not straight-As across the board for the Image S4s, though. Depending on your point of view bass output could either be described as enthusiastic or over-pronounced. It’s not quite to the point of being overwhelming, but I’m a fan of a more balanced sound. In Klipsch’s favour, though, is the consideration that the target audience for earphones at this price range will probably prefer something with a low-end bias to earphones with a more balanced reproduction. And besides, such sins are forgivable as the Image S4s are still lovely to listen to.


It’s a sound that is well suited to the likes of Rhianna and OutKast, the former’s Shut up and Drive and the latter’s Ms. Jackson show that, in addition to their more than capable low end drive, the S4s can also put in a good fight at the mid and high end. There isn’t quite as much detailing as you’d get from earphones such as the Etymotic hf2 headset, but the difference isn’t as profound as I expected given the price difference. With the right kind of music, the power of the S4s provides an arguably more enjoyable, if less accurate, experience than the Etymotics. 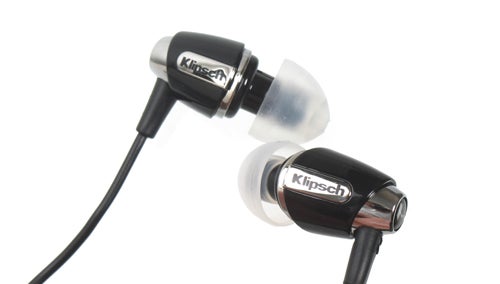 Firing up Billy Talent’s Turn Your Back and those suspicions are confirmed. While cymbals almost verge on being lost in the mix at times, the warm, encompassing soundstage makes it unlikely you’d notice if you weren’t specifically critiquing these ‘phones. More than once I’ve caught myself jiving about in my chair while trying to type this review, which is always a good sign.


As ever the all important question is: “would I be willing to spend £60 of my own money on a pair of these earphones” and with the Klipsch Image S4s the answer is yes. Despite a few shortfalls, the S4s are definitely still worth their price tag.