No matter what brand of MP3 player you favour, Apple, Sony, Creative, iRiver etc. one thing remains constant – the earphones that come in the box are, to all intents and purposes, rubbish! I still find it very depressing whenever I look around a tube train and see the vast majority of passengers sitting there with white Apple earbuds plugged into their head. The worrying thing is that in such an environment where the ambient noise level is ridiculously high, these passengers turn the volume on their players up to ear bleeding levels, just so they can hear their music!


Their answer is simple – get a decent pair of noise isolating earphones that seal into your ear canals. Once you have a good seal in place, the vast majority of ambient noise is blocked out, and since there’s no active noise cancelling involved in the process, you’re not affecting the sound quality of your music. Manufacturers such as Shure, Ultimate Ears and Etymotic Research have been making noise isolating earphones for years, all of which offer a massive step up in quality compared to anything you’ll find in the box with your player. And now Klipsch wants a piece of that earphone upgrade market. 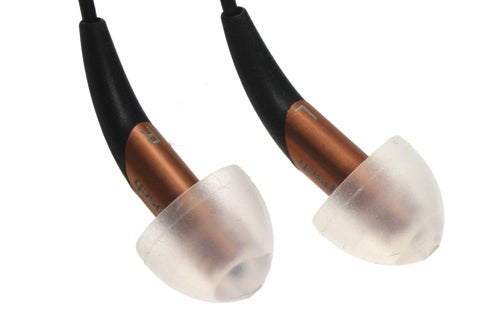 Although Klipsch hasn’t had a massive presence in the UK to date, anyone who has more than a passing interest in audio will have heard of the brand. Klipsch is keen to increase its profile in the UK, so you can expect to see a flurry of products in the coming months, ranging from high-end consumer devices, to audiophile gear. Kicking things off we have the Image noise isolating earphones, which Klipsch would like to think that all iPod (and other MP3 player) owners should be upgrading to, but there’s some pretty stiff competition out there from the established brands.


Before I get into the meat of this review, I have to say that these are, quite simply, the most comfortable earphones I have ever used. It’s true that Shure earphones are comfortable, and the foam tips create a great seal, but Klipsch has taken comfort to new levels. The silicone tips that are supplied with the Images are simply brilliant – they produce a stunningly effective seal with no effort whatsoever. And once these earphones are seated in your ear canals it really is easy to forget that they’re there, they really are that comfortable.

The comfort factor isn’t just about the ear tips though, it has as much to do with the weight of each earphone, or more to the point, the lack of weight. These are by far the lightest earphones I’ve ever pushed into my ears, while the cabling is also suitably lightweight so as not to pull at your ears. Of course I have commented before about how much I like the heavy duty cabling that Shure ships with its earphones, and I still do. However, despite the fact that the cabling with the Image earphones is very light, it doesn’t feel insubstantial and flimsy as a result, while it manages to remain untangled even when you just roll it up into a ball and put it in your pocket.


Another impressive feat is that far less noise is transmitted to your ears if you happen to knock the cabling, or if it slaps against you as you’re walking. If you’re a regular runner, you will absolutely love these earphones, since they don’t pull at your ears when you’re pounding those miles. My Shure E500s simply don’t lend themselves to long runs – being fairly heavy the constant pounding can result in them becoming dislodged, thus compromising the seal, while the heavy cabling is constantly pulling at my ears. The Klipsch Images on the other hand never shake in my ears, the cables never pull and the seal remains intact no matter how energetic your workout. 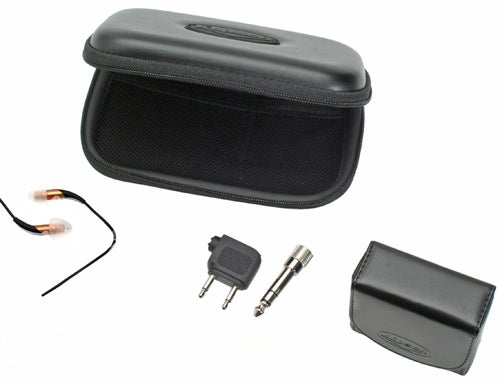 I also have to say that the Images look superb – finished in a metallic, coppery orange, each tiny cylinder is toped by a semi-transparent silicone tip, while a curved and flexible back feeds the cable to each of the tiny armature drivers. This flexible section also acts as a vibration damper, which explains why less cable induced noise is transmitted to the listener. The cable is just over 4ft long, which gives you enough length to have your player in your trouser pocket, but not so much as to get in the way. I am a fan of the modular cable design offered by Shure, but I can understand that Klipsch was keen to keep the cable weight to a minimum. At the end of the cable is a 3.5mm plug with a bend in it, again using a flexible cable cover – this should result in longer cable life, since cables usually split at the point where they enter the headphone plug. Of course the plug is slim enough to be iPhone compatible.


Klipsch has put together a solid bundle with the Images too. As well as the headphones themselves you get three pairs of silicone tips in the box – if you register online, Klipsch will also send you through another two pairs. There’s a small carry case for the earphones with a magnetic fastener, while ¼ inch and aeroplane headphone adapters are also included. A nice touch is a large carry case that can accommodate the earphones, the accessories and your MP3 player as well.

The Klipsch Images aren’t just about comfort and looks, they also pack a pretty good punch when it comes to sound quality. In fact I was quite surprised by how full a sound the Images produce, considering just how tiny the single driver is – there’s an impressive amount of bass response on offer, which of course in aided by the excellent seal produced by those silicone tips. When Ed tried these earphones he described the sound as “very pleasant”, and I think I pretty much agree with him. Klipsch has managed to produce a sound that’s very agreeable, and enjoyable to listen to, despite not offering the pristine clarity offered by some of Shure’s higher-end offerings. 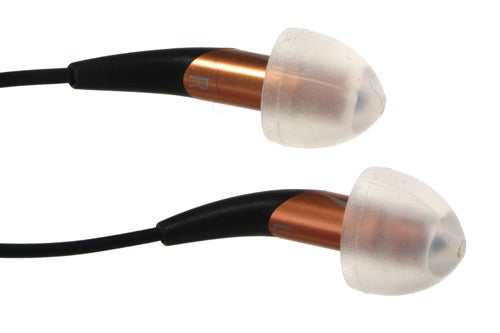 The Images revelled in the strong vocals, solid bass lines and jazzy percussion accompaniments pumped out from Amy Winehouse’s excellent Back to Black album. Snare drums sound raw and raspy, horns sound full and bassy and Amy’s stunning vocals come through clear, loud and strong. ”Love is a Losing Game” stands out with its John Barry like sound (it wouldn’t sound out of place on a 60s Bond soundtrack) – the gentle guitar chords, tight snare, soothing strings and haunting vocals combine into a beautifully melodic sound on the Images. Listening to the original demo version of the same song, really highlighted what these earphones are capable of. Amy’s vocals accompanied solely by a single acoustic guitar is a match made in heaven, and the Images do a sterling job of recreating the wonderful simplicity of the arrangement.


The Images handled themselves equally well when I turned to the legendary talents of Bob Marley. The laid back ”Stir It Up” proved to be a superb audition for these earphones, with the gentle guitar flick, strong bass line driving the sound and the vocals set back into the mix – lesser earphones could allow the bass to overpower the vocals, but the Images produced a sound so smooth and balanced that it just made me want to kick my shoes off, lay down on the grass outside my office window and soak up some sun (yes it’s actually sunny in the UK right now).

Cranking things up a little, I moved onto some Foo Fighters to find out how the Images coped with Dave Grohl’s, shall we say, powerful vocals – OK, so he screams a lot, but he’s still a genius! ”Monkey Wrench” is a pretty tough test for any earphones – the full on aural assault can often deteriorate into a messy cacophony if the earphones aren’t up to the job. The Images did a very good job of keeping things together, but as things got louder and harder, they started to fray at the edges, especially with the volume pumped up. That said, I’m not surprised by this – after all these are single driver earphones that are absolutely tiny.


The Klipsch Image earphones can be had on the street for around £169, which is roughly the same price that the Shure SE420 dual driver earphones are going for. With that in mind I plugged a set of SE420s in to see how they compare to the Images, and was surprised by how good they sounded. I remember being very impressed with the SE420s when I reviewed them a year ago, but I’d forgotten just how good they sound. When it comes to pure fidelity the Images can’t really compare to the SE420s – the dual driver Shures manage to pump out effortless bass without compromising the clarity. In fact listening to the SE420s made me realise that the bass response offered by the Images could sometimes muddy the overall clarity of the sound. 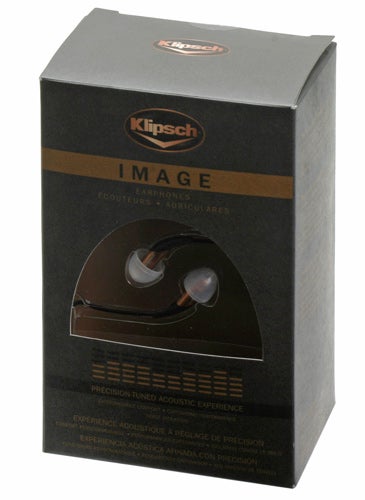 You’re probably thinking that my advice will be to buy the Shure SE420s instead of the Klipsch Images right? Well it’s not quite that simple. Despite the fact that the Images can’t really compete with the Shures when it comes to pure sound quality, they still sound pretty damn good, and they offer many advantages over the SE420s. I can’t stress enough how comfortable the Images are, and how light they are in your ears. They’re also very unobtrusive, and if you saw anyone wearing a pair it would look as though the wires were running directly into their head. I have to say that there are instances where I would rather be using the Images than my own Shure E500s, despite there being an even bigger gap when it comes to sound quality. On the whole a very impressive effort from Klipsch and I’m looking forward to auditioning the rest of its earphone range.


For anyone that wants a set of earphones that sound infinitely better than the bundled set that came with their player, the Klipsch Images will do the job. Not only do they sound good, but they’re beautifully constructed, amazingly comfortable and incredibly light. Yes, there are better sounding options out there for the same money, but if you’re looking for a killer combination of comfort and sound quality the images are hard to beat.