“If someone buys an HDTV and doesn’t have high-definition surround sound to go with it, it’s like buying a Ferrari without the engine or a Learjet without the wings. It’s the audio that drives the action, creates the mood and brings the video content to life,” says Mike Klipsch, president of US audio brand Klipsch. 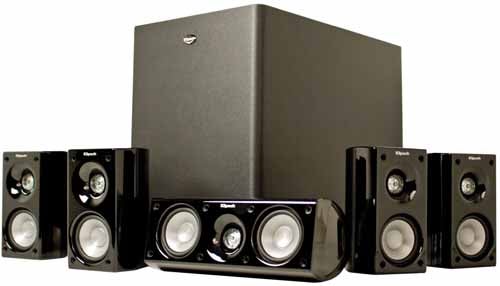 He has a point. It’s all very well getting yourself a swanky new TV and Blu-ray deck, but without surround sound you’re only getting half the story. And, thankfully, if you’re the sort of person who can’t even afford to use Ferraris and Learjets in a metaphor, let alone buy one, then the good news is that high-quality 5.1 speaker systems are more affordable than ever – as the HD Theater 500 system aims to demonstrate.


This sub/sat system is yours for just under £500 and conveniently packs all the speakers you need into a single box, although you’ll still need an AV receiver to drive them of course. One of the main selling points of the system is its compactness – no big, imposing floorstanders or fridge-sized subs to contend with, just a set of compact speakers that you can perch around the room without having to get a rubberstamp from your other half.


In the box you’ll find five satellites and a powered subwoofer. The front/rear sats stand just 6in high and the sealed enclosure comes dressed in a very appealing high gloss-black finish. The front grilles can be removed, and doing so exposes the 2.5in IMG mid-bass woofer and MicroTractrix Horn-loaded 0.75in aluminium dome tweeter. According to Klipsch, the efficiency of this proprietary technology means you don’t need much power to drive them. 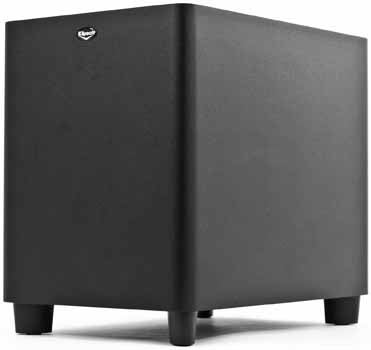 Pick one up and can feel the quality instantly, telling you all you need to know about their long-term durability. They may be small, but each one is weighty and solid, the sort of build quality that you perhaps wouldn’t expect at this price point. Klipsch says they’ve been ‘value engineered’ while staying true to the company’s audiophile heritage, and if they sound half as good as they feel then we could be onto a winner.

However, on the back we find the first indication of the system’s value-led approach – springclip terminals. These are the sort of connections found on the hollow, plastic speakers you get with an all-in-one system, not on a £500 package. Not only do they make it fiddly to feed in your cables, they also lack the tight, sturdy connection provided by binding posts. 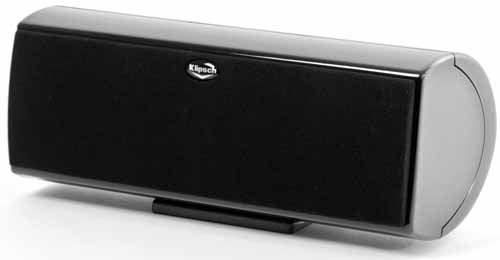 Still, it’s back to the positives as we pull the sub out of the box. Tarted up with a tasteful black pica vinyl finish and curved corners, this is the sort of smart, low-key sub we go for, and on the inside it uses a down-firing 8in driver and a rear-firing flared port. At 13.9 x 12.5 x 12.5in, it’s a bit bigger than we expected given the size of the sats.


Around the back is a fine array of dials and switches. You get controls for volume and crossover, the latter of which can be set between 80 and 160Hz, although with the sats only dipping down to 150Hz you might want to set this towards the upper end of the dial. There are also line inputs, speaker-level springclip terminals and switches to flip the phase 180 degrees and the select the power mode.

The magnetically shielded centre speaker shares the same heavyweight build quality and styling as the fronts and rears, but it’s configured horizontally to fit on top of or underneath your TV. And to cope with the extra sonic demands placed on it by movie soundtracks, it’s fitted with two 2.5in woofers, positioned either side of the central dome tweeter. But, sadly, it too is fitted with springclips. Bah humbug!


If you’re planning on wall mounting these speakers, you’ll find the relevant brackets in the box, which attach to the speakers using the single-point fixing on the back and provide a 40 degree range of motion. You also get a little plastic cradle for the centre speaker, which lets you tilt it to the desired angle and stops it slipping around on your AV stand.

After a thorough workout with a few Blu-ray movies, the HD Theater 500 proves to be a very competent performer, delivering surprisingly large-scale sound for such small-scale speakers. There are a couple of tell-tale signs of the system’s value approach, but on the whole the quality is consistently pleasing.


As per usual we headed for Hellboy II and the astounding scene where our titular hero takes on a ten-storey-tall plant in the middle of a city. Right off the bat the Klipsch gives a tenacious, gutsy performance, compensating for its size by blasting out the chaotic action like a system possessed. A case of ‘little speaker syndrome’ perhaps? 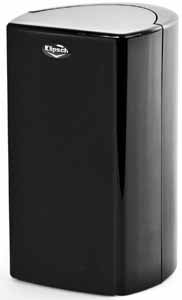 Smashed-up cars, crashing windows and massive stomping footsteps are conveyed with thrilling energy and attack, while the snippets of dialogue come across loud and clear through the impressive centre speaker. There’s a lot of detail in the mix, and the rears project effects far and wide, creating an immersive soundstage.


Exciting it may be, but there are times when all this physical exertion gets a bit much for the sats to take. High-pitched noises and particularly loud effects, such as the Elemental’s deafening cries, cause the sats to distort slightly, and high-frequencies sound a touch harsh, which, if listened to for any great length of time, can be a little fatiguing. It’s nowhere near as bad as some of the budget 5.1 and 2.1 systems we’ve tested of late, but it might make you want to invest a bit more cash if you fancy a touch of extra top-end refinement. 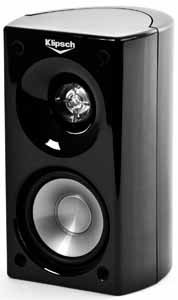 But in all other respects the HD Theater 500 does a fantastic job, particularly the sub, which is tight and punchy and blends beautifully with the satellites. Listening to it do its thing during Hellboy’s battle with the Golden Army is a real joy – it has real floor-shaking presence but it’s so responsive and well integrated that you almost forget it’s there, and we mean that in a good way.


With music the Klipsch system provides a very enjoyable listen, but keep an eye on that volume level as the same top-end distortion can occur with certain material – one or two jazz solos and brass sections sounded a little bright. Luckily, lower-level listening is clear and dynamic.


Although its sound isn’t as smooth or refined as the KEF KHT2005.3 or Monitor Audio Vector, the HD Theater 500 is much better than we expected for the money, which makes it a bit of a bargain in our book. That said, it’s a shame Klipsch couldn’t stretch to binding posts – springclips are a disappointing thing to find on an otherwise beautifully built and stylish set of speakers.